Biology. The new species can be found living along the sand banks of the Salween river ( Fig. 24 View FIGURES 24–26 ). In February of 2018, during the dry season, when the second author (NP) visited the habitat, beach and dunes were common along the river bank varying in length, depth and height from the river surface. We surveyed a part of the river 1 kilometer long and 50–200 meters wide. The slope on the bank varied greatly from 90 degrees to no slope at all. According to the local residents, the majority of the beach would be inundated during the monsoon season. At night, the dune crickets can be easily located by looking for their newly dug burrows ( Fig. 25 View FIGURES 24–26 ), where the wet sand from their burrows is of different color from that on the surface. The burrows were mostly found close to the water line, where the sand under the surface still retained some moisture and is thus suitable to form stable burrows. The closest burrows were about 1.5 meters and the farthest about 5 meters from the water line. The length of a burrow was around 50–60 cm deep. The crickets were mostly found at the entrance of the burrows with their head protruding and their antennae sweeping back and forth. To dig, Individuals use the hind legs to kick out the sand while facing into the burrow. If disturbed, the cricket quickly retreats into the burrow and uses some sand to cover the hole. However, if they were spotted away from the burrow, they tend to remain motionless probably relying upon their camouflage to escape detection. During our surveys, a few small moths were found on the bank but no predation by the crickets was observed. We believe that as more plants start growing on the dunes during the dry season, more prey would be available for the crickets. Potential predators of the crickets include small frogs ( Fejervarya   sp.), which we found in burrows and small carnivores of which we found a set of foot prints. This was most probably of civet. We were able to locate a few unused burrows during the day but most of the burrows, which we observed during the night were closed and the crickets were hidden under the sand during the day. According to the locals, the cricket can be found only in dunes of low disturbance. Most of the crickets that we observed in February were in nymphal stages. The locals said that they would be fully grown in May –June period, which coincides with the beginning of the monsoon season in the region. This statement is most likely true because we collected adult specimens in July. Adults can be found until December when the authors (PD, KM and PM) found adults sharing the habitat with nymphs in the same areas ( Fig. 26 View FIGURES 24–26 ).

Currently a few dam projects, both up and downstream from the type locality, are being proposed by Myanmar government. The dam(s), if built, would inundate the river bank habitat of the new species. Furthermore, the river downstream of the dam will experience unnatural water flow which would disturb the sand beach/dunes formations. This in turn will adversely affect the habitat of this unique species. The dam(s) are also likely to create unnaturally high fluctuations of water levels. This might directly harm the crickets living in burrows along the sand banks. 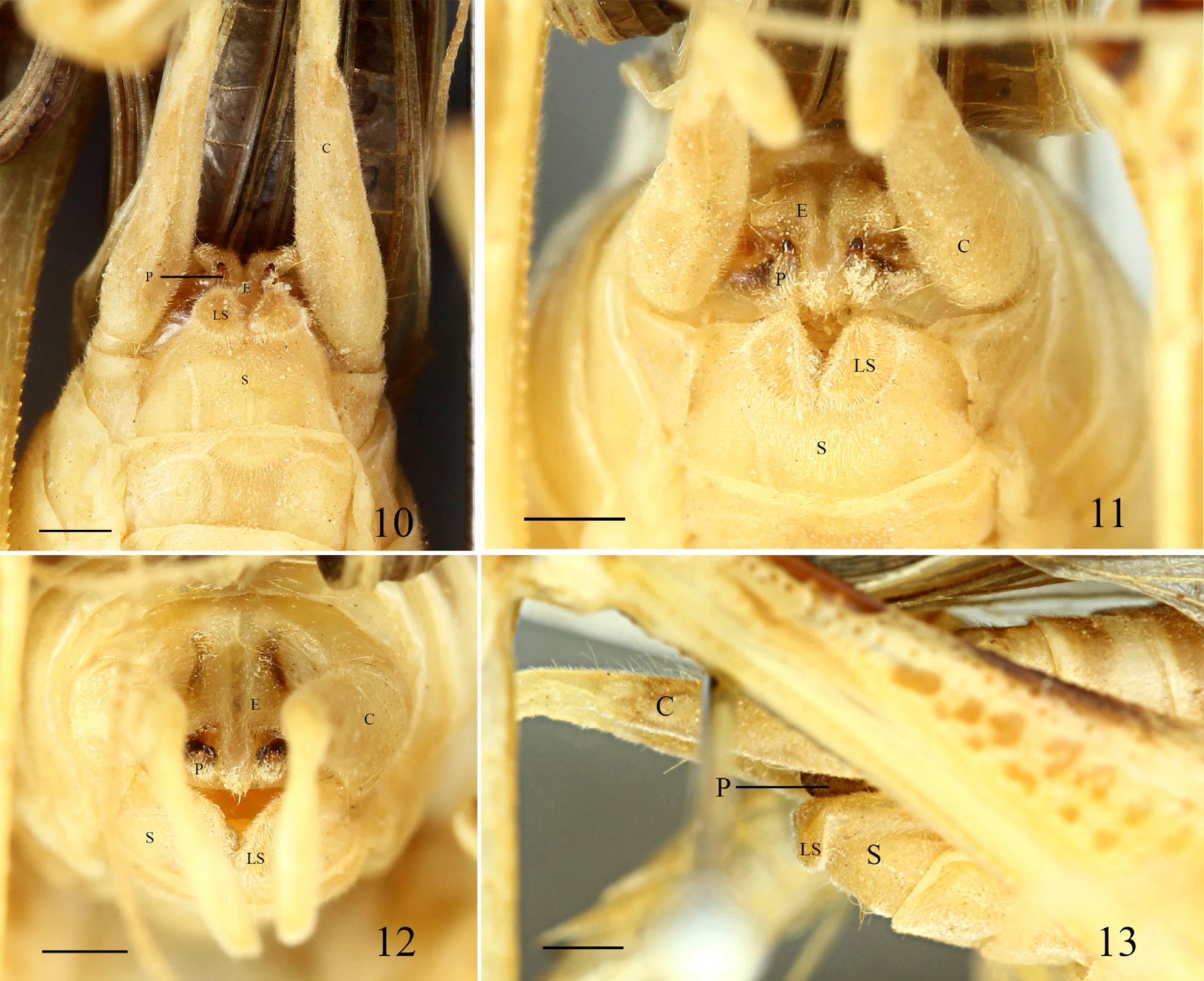 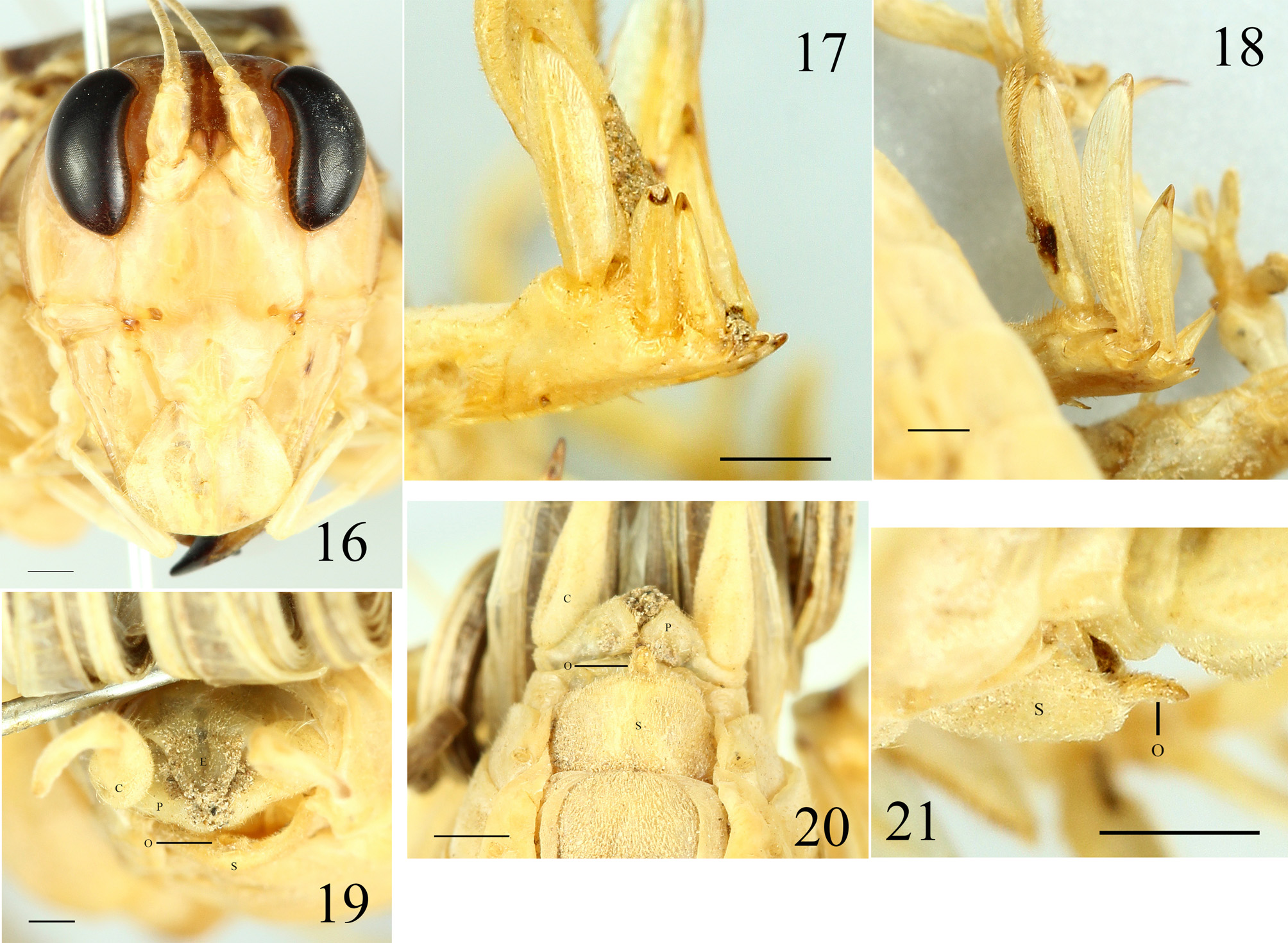 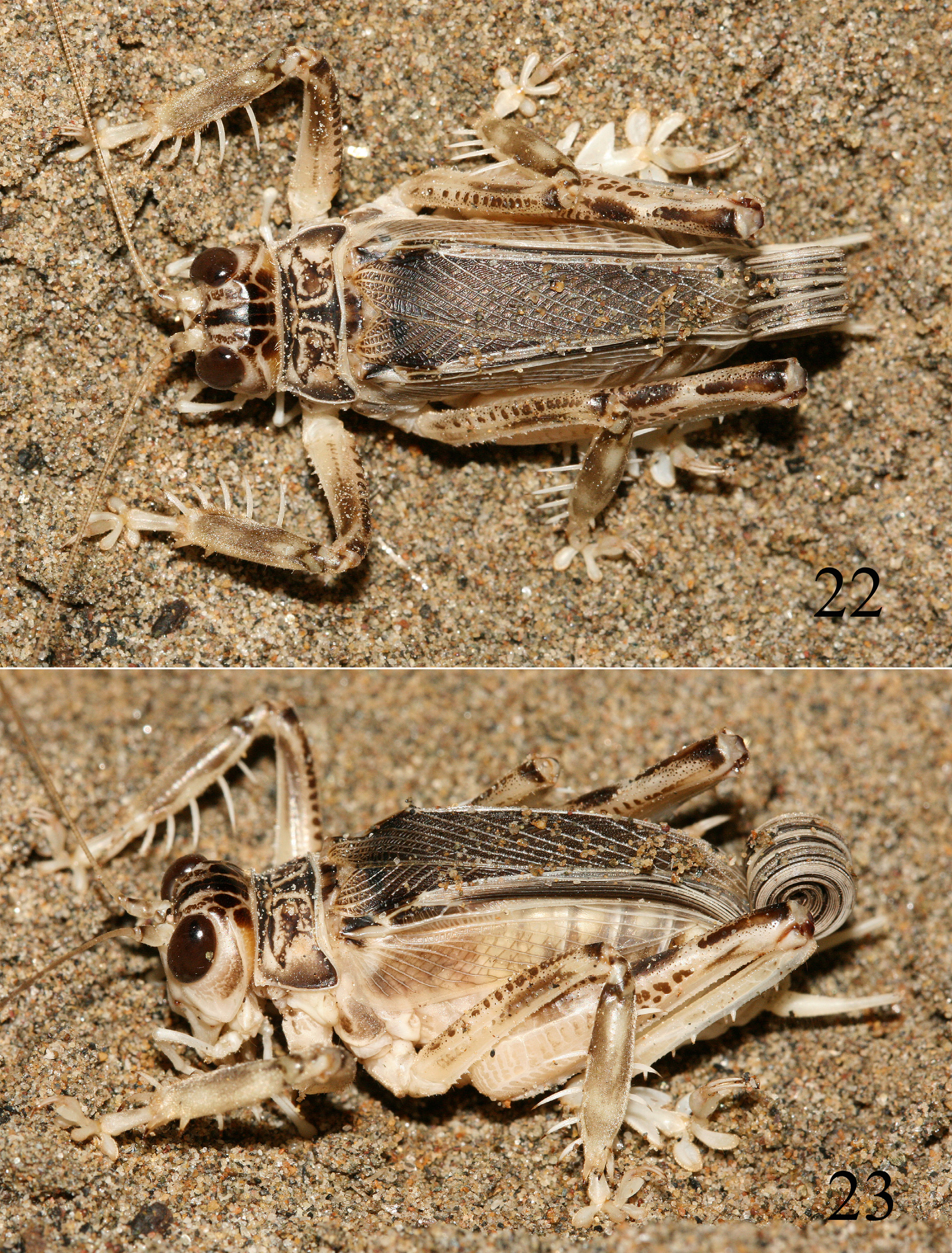