Etymology. The name, to be treated as a feminine Latin noun, refers to a Brazilian folklore figure known as Matinta Pereira, commonly feared in Northern Brazil (= Amazon) for being a witch worn in black who lives in the forest. The association is due to the meaning of the word “mago” in Iberian languages (= wizard), since species being transferred herein to Matinta were previously included in Mago O. Pickard-Cambridge.

Diagnosis. Amycine species included in Matinta generally have the male palp with a “tegulum” obliquely divided by a thin slit, with the two “tegular” halves articulated by a poorly developed hematodocha ( Figs 35–36 View FIGURES 35–36 ; see also Patello & Ruiz 2014: figs 7–10). The embolus is usually short, wrapping less than 180° around the tegulum, with the tip resting in a cymbial groove. [In an alternative interpretation of the bulb, the tegulum would be reduced and represented only by the proximal half prior to the hematodocha; the distal “tegular” half would be, in fact, a modification of the embolar base; in this alternative, the embolus would be articulated with the reduced tegulum and rise at 2 o’clock in the left palp, reaching almost 360°.] The femur is straight ( Fig. 39 View FIGURES 39–48 ). Epigynal plate varies from having a common atrium (see Galiano 1968: fig. 59) to a pair of separate copulation openings (see Patello & Ruiz 2014: fig. 32), but with no digitiform gland ducts. The legs ( Figs 40–43, 45–48 View FIGURES 39–48 ) are relatively shorter and thicker than in many other amycines, such as Noegus , Hypaeus , Amycus and Acragas . This gives them a more robust appearance than most other larger species of amycines ( Figs 37–38 View FIGURES 37–38 ). Besides having the “tegular” slit, species of Matinta differ from Mago in the 16SND1 gene region (see below), in having the 3 rd and 4 th legs coequal in length, the male palp patella and tibia coequal in length, and the larger and less compact body.

Note. The boundaries of amycine genera are still being revised. The diagnostic “tegular” slit is not obvious in Matinta procax ( Simon, 1900) comb. nov., Matinta saperda ( Simon, 1900) comb. nov. and in Matinta pardo (Costa & Ruiz, 2017) comb. nov. However, these three species have the subtegulum exposed on the retrolateral side of the male palp, a feature also seen in Matinta apophysis (Costa & Ruiz, 2017) comb. nov. (which has the “tegular” slit), but not in the remaining species of the genus. These are all kept in Matinta based on the overall similarity. Although under a new genus name, this is conservative in preserving the existing concept of the group. A cladistic analysis needs to be carried out to confirm the monophyly of the genus.

List of species. The type species Matinta acutidens ( Simon, 1900) comb. nov. and closely related species (treated as the acutidens species-group) received recent redescriptions, diagnoses and updates on distribution records ( Patello & Ruiz 2014). The text below is only intended to establish new combinations and a list of the species included in the genus (for known sexes and details on nomenclatural acts, see World Spider Catalag (2019) and listed literature): 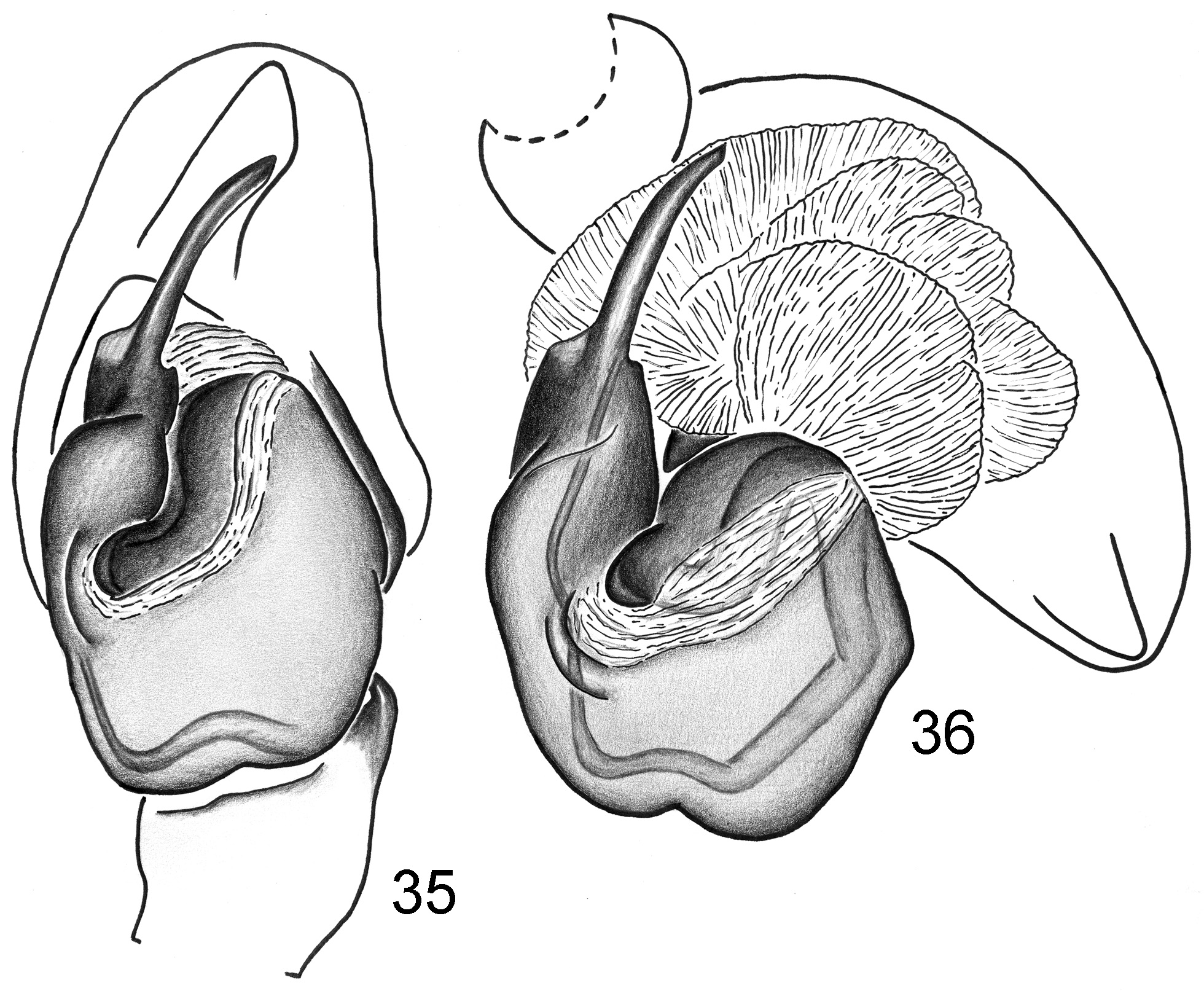 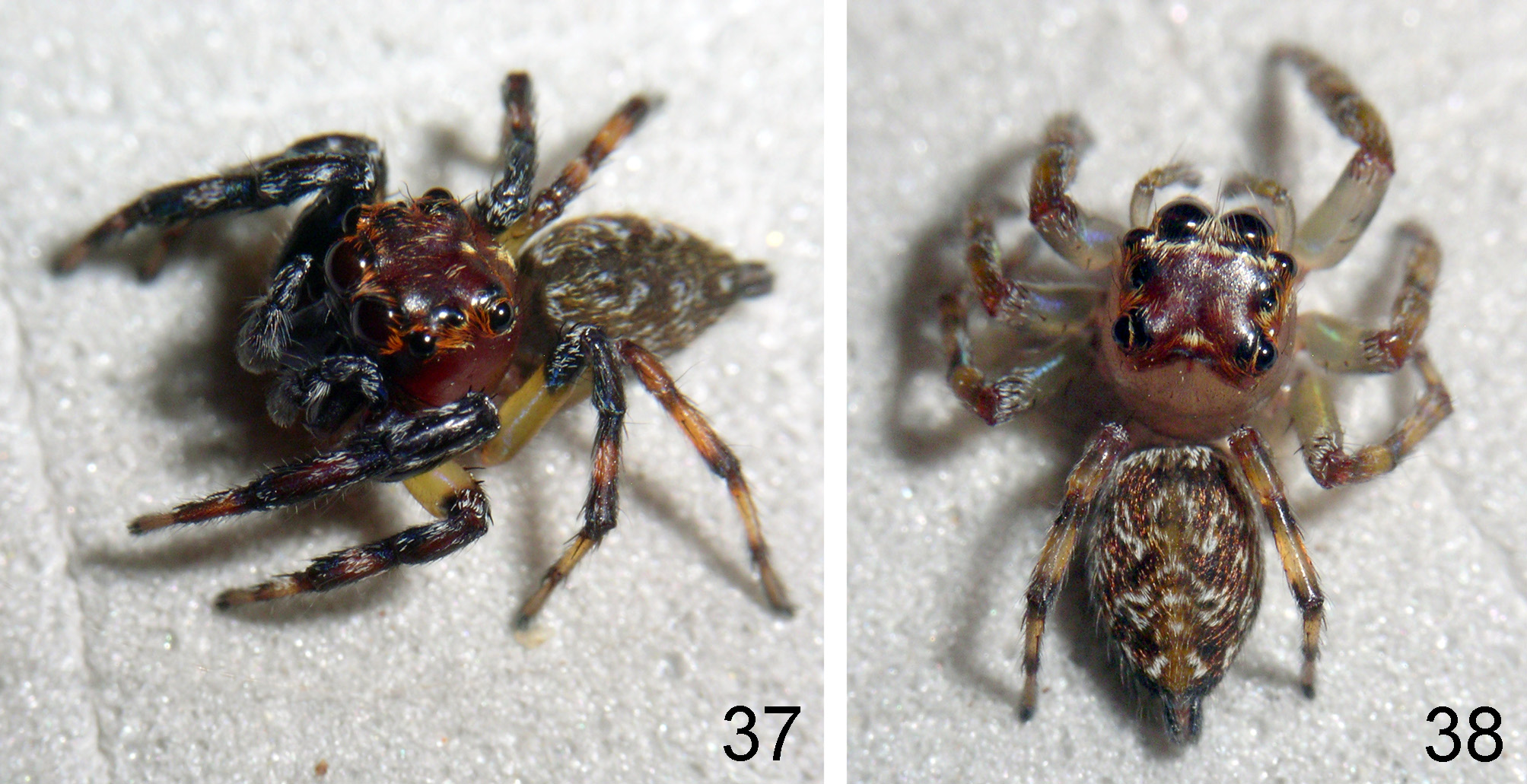