The lectotype of Aleurodes perseae  is one of two puparia on a slide bearing the type data (see above), is clearly indicated on the adjacent red USNM type label, and is the specimen with clearly developing adult eyes visible through the cuticle. The lectotype is the specimen in best condition, and the author considers that improvement through remounting, with proper maceration, would be possible in the future.

DESCRIPTIVE CONFLICT—PUPARIUM. In the original description of Aleurodes perseae Quaintance (1900)  stated that “On the dorsum are 5 pairs of cup­shaped compound pores, 4 pairs on caudal third of case [posterior part of abdomen], and the fifth pair on cephalic segment…..”. However, the puparium was illustrated with five abdominal pairs of compound pores, the anteriormost abdominal pair being significantly smaller than all the others. The original account also described puparial secretions that were much more extensive than is usually seen amongst Paraleyrodes  species: in a later paper Quaintance (1909) quoted the opinion of Dr H.W. Morrill, that puparia with such secretions had proved to be parasitised, and that is confirmed by the present author’s field observations of Paraleyrodes  puparia ( Fig. 4View FIGURES 3 – 4). This then raised the question of whether the originallydescribed form might have been atypical, due to parasitism, with normal specimens (not seen by Quaintance at that time) perhaps having the typical complement of seven pairs of compound pore pairs in total.

Quaintance (1909) redescribed Aleurodes perseae  , and formally designated it as the type species of his new genus Paraleyrodes  . In his “revised description” the compound pore complement did indeed rise from five pairs (described) and six pairs (illustrated) [in 1900] to seven pairs (both described and illustrated), this being the typical situation throughout the genus as now understood. This revised description was repeated by Quaintance & Baker (1913), but with fresh illustrations provided. Whereas the 1909 drawing was a fairly accurate representation of a typical Paraleyrodes  puparium, the 1913 puparial figure showed all six abdominal compound pores to be the same size as each other, a characteristic of Metaleurodicus  species that is never seen in Paraleyrodes  .

Although puparia with only five pairs of abdominal compound pores were generally (and correctly, see Conclusions) being identified as P. perseae  for many years, Paulson & Kumashiro (1985) stated that puparia of Hawaiian P. perseae  bore six abdominal pairs, thus continuing the confusion over this species’ identity. However examination of material on behalf of the author (Bernarr Kumashiro, personal communication) indicates that the Hawaiian record is correct but that Paulson & Kumashiro’s description was not.

DESCRIPTIVE CONFLICT—ADULT MALE. In the original description Quaintance (1900) quoted Theodore Pergande’s very basic observations on an adult, but the sex was not noted and Quaintance stated that the single specimen was lost before he could examine it himself. Pergande’s colour observations do suggest that the lost specimen might indeed have belonged to Paraleyrodes  , but nothing more can be deduced.

In his 1909 redescription, Quaintance did describe adults and spoke of Morrill having “been able to obtain the adult in quantity” and having “kindly furnished [Quaintance] with abundant specimens of all stages…..”. However, he described adults generally as having four antennal segments, which is a character of female Paraleyrodes  only, and the caption of his illustration of such a female antenna simply says “antenna of adult”, suggesting that he did not study any male antennae at all. Quaintance clearly did study at least one male specimen, and the aedeagal apex was illustrated as a two­pronged structure (reproduced here, Fig. 16View FIGURES 8 – 16), but the lack of comment on the highly unusual and characteristic male antennae is remarkable. In Quaintance & Baker’s (1913) new illustrations, that accompanied the repeated 1909 revised description of “ perseae  ”, the bifurcate male aedeagus seems to have been drawn from the same specimen figured in 1909, but the drawing is not quite identical; also a clearly­female antenna is again figured and captioned as though it could have belonged to either sex.

A single male in BMNH ( USA, Florida, Orlando, no host data, 12.xi. 1914, Williams, Fig. 14View FIGURES 8 – 16) has a bifurcate aedeagus, but with the prong bases not contiguous as illustrated in the 1909 and 1913 papers. Two further male specimens, in CDFA, ( USA, Florida, Broward Co., Davie, Citrus  sp., 08.xii. 1985, Dowell, Fig. 15View FIGURES 8 – 16) each have a bifurcate aedegus, but with the prongs almost parallel and directed posteriorly, rather than laterally as in the Williams specimen. Either of these males may belong to the species which Quaintance and Quaintance & Baker thought was P. perseae  , but both remain undescribed and unassociated with puparia. The aedeagus depicted in the 1909 and 1913 papers also bears some resemblance to P. a n c o r a Martin (2004) ( Figs 12–13View FIGURES 8 – 16), described from material on avocado in Belize and Nicaragua; however, P. a n c o r a also features a dorso­apical aedeagal process not present in the Quaintance / Quaintance & Baker drawings, and has not yet been recorded from anywhere in the USA.

CONCLUSIONS. After so many years of uncertainty concerning the identity of P. perseae  , recent observations have enabled a resolution of the problem, through examination of puparia, associated adult males, and puparia containing fully developed pre­emergence males. The 1900 puparial illustration is correct in its depiction of the compound pores, the “missing” pair of small compound pores is not an artifact of parasitism, and this confirms that P. perseae  is the only known species of Paraleyrodes  with a pair of very small compound pores on abdominal segment III, but none at all on segment IV. For the future, the distinctive puparia will probably allow accurate identification, even in the absence of confirmatory males. In practice, puparia have hitherto tended to be correctly identified, and it is the males that have not.

The aedeagal apex of male specimens recently collected in Nicaragua ( Figs 8–9View FIGURES 8 – 16), and reared from puparia that match the lectotype puparium of Aleurodes perseae  , is quite different in structure from that which Quaintance (1909), and subsequently Quaintance & Baker (1913), mistook for P. perseae  . This finding, combined with the illustration of a puparium with six pairs of abdominal compound pores ( Quaintance, 1909), indicates that the redescription of “ P. perseae  ” involved a different species entirely. Unfortunately, the detail of the 1909 description is still insufficient to lead to any conclusion about the species concerned.

The aedeagus of true P. perseae  is illustrated here (probably for the first time) in figures 8–10. This should allow for confident identification of this species when puparia are also present. However, the male aedeagus of P. perseae  is very similar to that of P. citricolus Costa Lima  ( Fig. 11View FIGURES 8 – 16), which typically exhibits six, somewhat digitiform, ventral processes but which otherwise shares the same lateral profile. That P. perseae  and P. citricolus  are particularly closely related is also indicated by the structure of the inner lumen of the large compound pores ( Fig. 7View FIGURES 5 – 7), even though the large compound pores of P. citricolus  are usually over twice the diameter of those of P. perseae  .

A final observation is that this is the second example of a species of Paraleyrodes  being incorrectly identified because described males were not associated with puparia. For many years, P. pseudonaranjae Martin (2001)  was misidentified as P. naranjae Dozier (1927)  , based on its puparia. However, the males in invasive populations did not match the two male syntypes from Dozier’s original sample of P. naranjae  , and the invasive populations proved to be a different and undescribed species. The author’s own field experience indicates that, in their native habitat, puparia of Paraleyrodes  species are frequently found with adults of different species feeding on the same individual plant, making the association of adults with puparia difficult. Conversely, invasive populations tend to be taxonomically useful, for they usually comprise only single species. 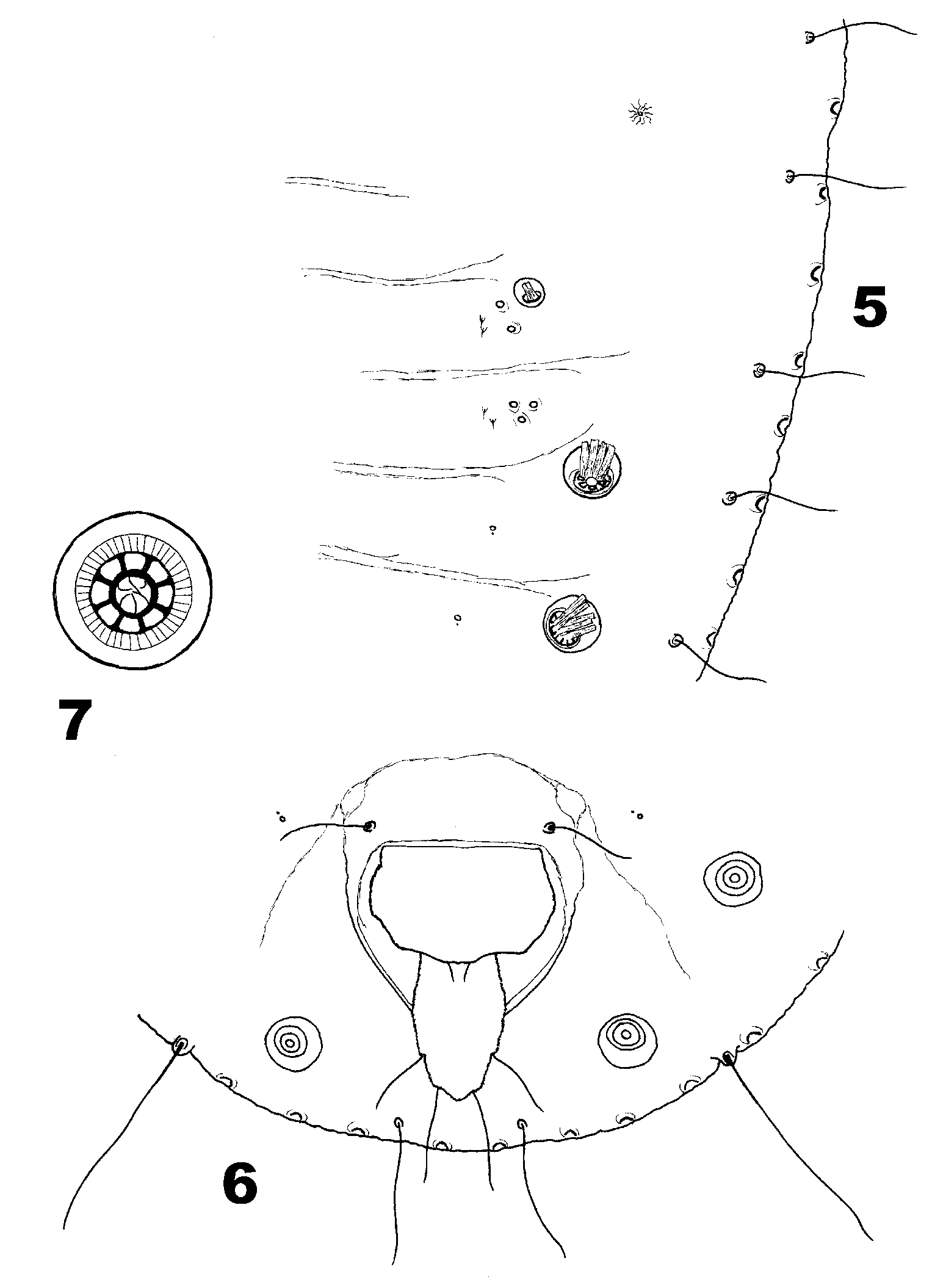 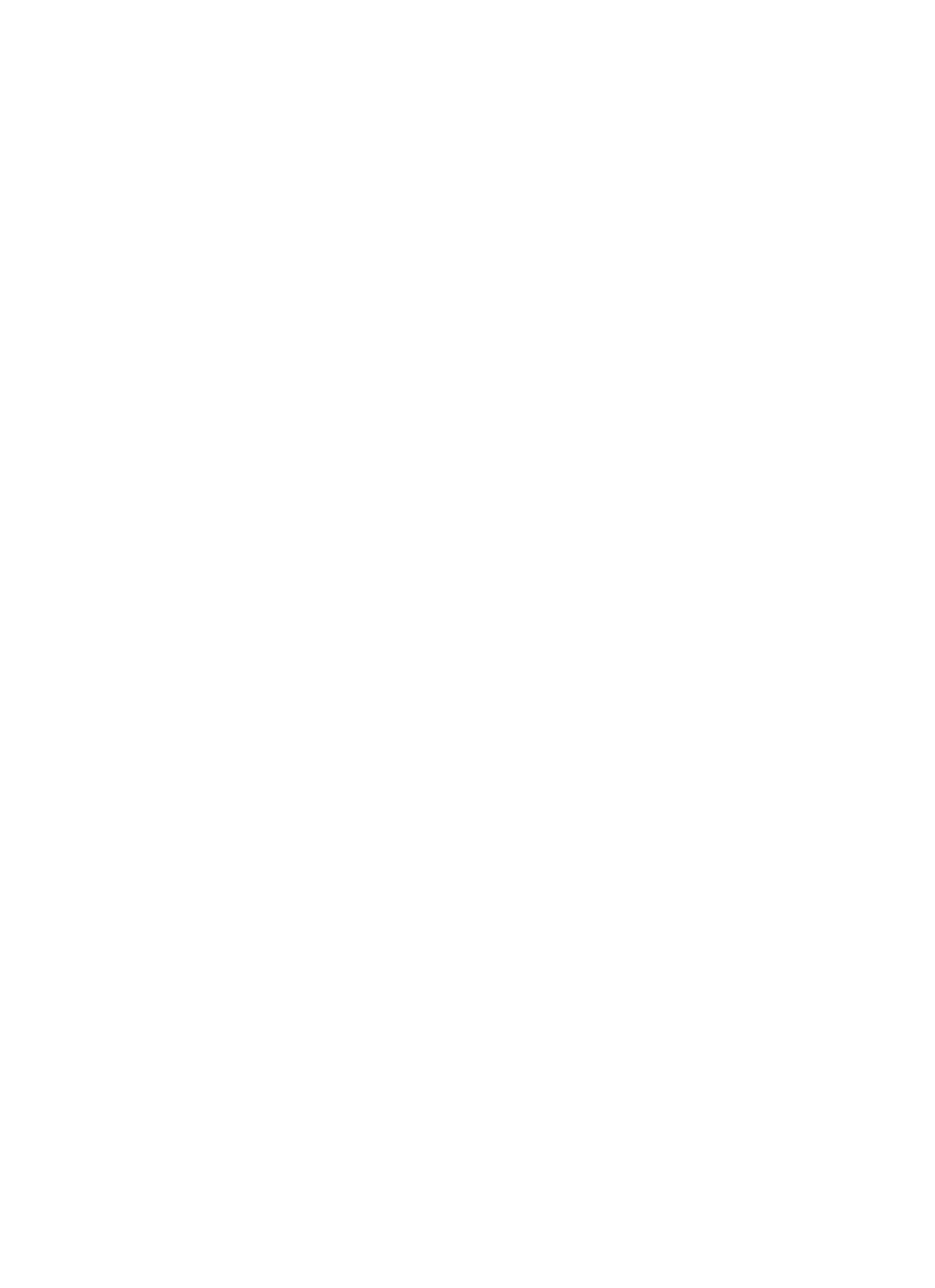 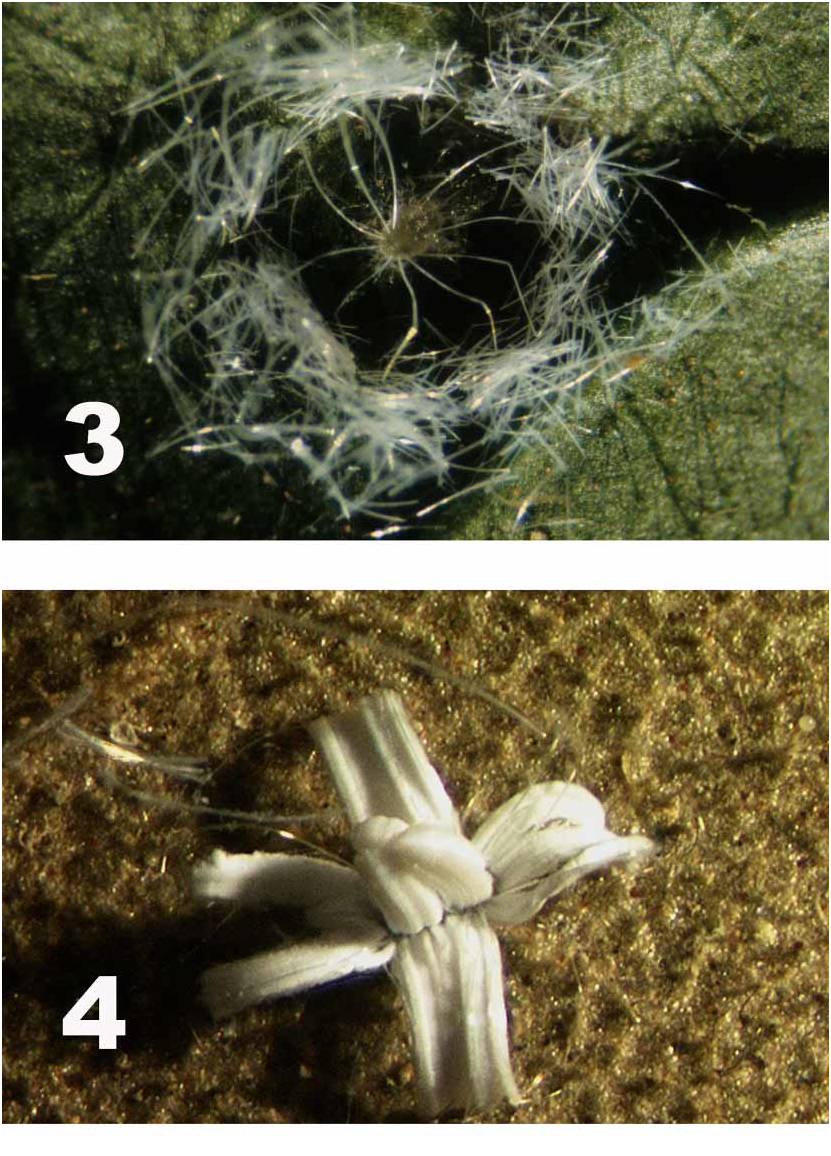