REMARKS: This species was originally described in the 1824 Isis . In the Beitra¨ge one specimen is described, with measurements and scale counts. The species was revalidated by Bailey (1955).

There are no specimens in the collection.

The name of this species dates from the 1824 Isis paper, not the 1825 Beitra¨ge as sometimes given. The species appears to be based on a single specimen with 137 ventrals and 50–51 subcaudals; the Beitra¨ge gave measurements equivalent to 721 + 155 mm. AMNH R-3365, a female, is a very damaged specimen, whose ventrals cannot be counted. But it measures 717 + 155 mm and has 50 subcaudals—essentially a perfect match. Agreement with the plate is also very good.

REMARKS: Coluber lichtensteinii dates from the 1824 Isis , not from the 1825 Nova Acta as given by most authorities (e.g., Stuart, 1941: 39; Peters and Orejas-Miranda, 1970: 192). A formal description with a color plate appeared in Nova Acta, and virtually the same description was published in the same year ( Wied , 1825b) in the Beitra¨ge. For the 1831 fascicle of Abbildungen, the original color plate from Nova Acta was evidently recopied (perhaps with specimen in hand, as there is a slight shift in positioning) by the artist Hermann Beckers in the same style, with the outline drawings of the head being reduced and repositioned. This second painting, shown in Bosch (1986 – 1991: 256), was transferred to copperplate in mirror image for the Abbildungen (see pl. 29).

Wied proposed lichtensteinii essentially as a nomen novum for Coluber capistratus Lichtenstein (1823: 104) , which was based on a five-line Latin description in a sales list of duplicate specimens in the Berlin Museum. Wied’s description was, of course, much more complete and accompanied by a color plate, but that was before priority of publication became virtually paramount in nomenclatural matters. 28 Both these names have been buried in the synonymy of the species-group name bifossatus at least since Boulenger (1894: 10).

28 Usage, however, sometimes trumps priority, as in the case of another of Prince Max’s names: Coluber poecilogyrus (now in Liophis ) came to prevail by fiat (in 1996) over older names, including Lichtenstein’s C. alternans , which was published on the same page as Coluber capistratus above.

Some years later, Schlegel (1837, vol. 2: 143, pl. 5) misapplied Daudin’s name C. pantherinus to a Brazilian specimen (‘‘St. Paul’’ 5 São Paulo) of the same species as Wied’s C. lichtensteinii! Remembering that ‘‘authorities’’ in Maximilian’s 1860 catalog were not necessarily original authors, the blank space evidently reflects his uncertainty about the attribution of the name pantherinus .

specimen—AMNH R-3514 ♀, to which had been added at one time an AMNH mammal or bird paper field tag bearing an old card catalog number (588) and the name Coluber pantherinus , obviously taken from Maximilian’s manuscript catalog.

Wied gave measurements and scale counts of six specimens, of which one was in Berlin (Lichtenstein’s holotype) and one in Leiden. The relevant Nova Acta and Beitra¨ge data for Wied’s specimens (excluding the two in Leiden and Berlin) and the extant AMNH specimen are:

From these comparisons alone, it would seem probable that AMNH R-3514 is Wied’s specimen number 4 above (this is the sixth specimen in Nova Acta and the Beitra¨ge). In corroboration, AMNH R-3514 is clearly the specimen illustrated in color in the Nova Acta plate and again in the Abbildungen (see pl. 29). The dorsal blotch pattern is a good match: The specimen has 44 body blotches + 25 distinct tail blotches 5 69, about the same total in the plates, with the first blotch being confluent with parallel cephalic blotches and with the first five dorsal blotches being detached from the lateral markings. The details of head scutellation are especially convincing. The inherently variable gular scales are a virtually perfect match between specimen and plates; other details include the point contact of each fifth infralabial with a posterior genial.

Therefore, the only specimen of this species remaining in the Maximilian collection is clearly a syntype, and the most important one at that. We consequently designate it (AMNH R-3514) as lectotype of Coluber lichtensteinii Wied, 1824 . Several localities are mentioned in the Beitra¨ge, but they cannot be matched to specimens. The type locality is the east coast of Brazil.

REMARKS: The brief diagnosis in the Reise, repeated (paraphrased) in the Isis , is com-

plemented by a good description in the Beitra¨ge, with measurements and scale counts, and by an excellent plate in the Abbildungen (see pl. 30).

Wied’s only specimen measured 1433 + 354 mm, and had 224 ventrals and 79 subcaudals. AMNH R-3481, a male, measures 1455 + 373 mm, and has 222 ventrals and 79 subcaudals. Compared with plate 30, the specimen matches the outline drawings of scutellation on the dorsal and ventral sides of the head; the side of the snout of the whole snake is accurate, although the two postoculars are much too long (being better represented in the dorsal outline drawing). The specimen is differentially faded—yellowish over much of the dorsum but brown on parts that presumably were less exposed to light.

Inasmuch as Wied stated in the Beitra¨ge that he had taken only a single specimen and that the present one agrees closely with the description and plate, AMNH R-3481 is the holotype beyond doubt. It is shown in his 1860 manuscript catalog as ‘‘ Brachyrrhyton D.B. plumbeum Wied. D.B.’’ (species no. 156). 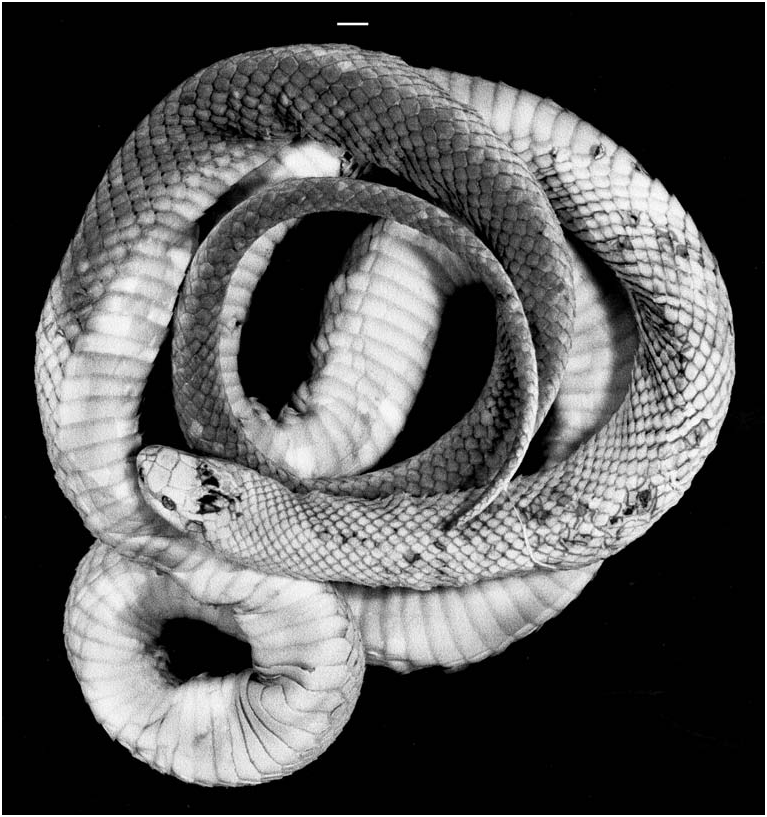