Mxp: Mxp1 with bases broadly separated. Mxp3 with long setae. Basis with 1-4 denticles on mesial ridge. Ischium with small spine (and much smaller accompanying spine in holotype) lateral to distal end of flexor margin, crista dentata with a few obsolescent denticles. Merus more than twice (2.7 ×) length of ischium, ridged along flexor margin, not well compressed; with 3 o 4 spines on distal third of flexor margin and 1 or 2 spines on distolateral margin. Carpus unarmed.

REMARKS„ In an earlier stage of the present study, Uroptychus articulatus n. sp., U. imparilis n. sp., and U. parisus n. sp., had been placed together under U. scandens Benedict, 1902 on the basis of the uniquely truncate dactyli of P 2-4. In addition, they share nearly all of essential characters such as the anterior carapace with denticles or small spines, all pereopods slender and very setose with the same spination, and also have Mxp3 and sternal plastron almost similar to one another. Careful examination of the material at hand and the type material of U. scandens made available on loan showed that there are two different shapes of eyes. One is proximally swollen and distally narrowed, and the other is nearly uniform in breadth, with the cornea broader than the greatest breadth of the remaining eyestalk. Also the antennal scale is either articulated or fused with article 5. Whether these represented intraspecific or interspecific differences was determined by DNA analyses ( COI gene sequences) conducted at my request by S. Samadi, M.-C. Boisselier and L. Corbari. They showed genetic divergences between the four different forms are sufficiently high to secure their specific value.

The antennal scale is articulated in U. articulatus and U. imparilis , whereas it is fused with article 2 in U. parisus and U. scandens . These couples each are different in the shape of the eyestalk. Uroptychus articulatus and U. scandens have an elongate, proximally broadened and distally narrowed eyestalk, with the cornea distinctly narrower than the maximum breadth of the eyestalk, whereas in U. imparilis and U. parisus the eyestalk is equally broad proximally and distally, with the cornea slightly broader than the eyestalk at its maximum. Other features are extremely similar in the four species.

Examination of the material reported by Miyake & Baba (1967) from the East China Sea showed that it is referable to U. scandens sensu stricto but the antenna shown in their illustration that is articulated with antennal article 2 is apparently from another specimen of a different species, probably U. imparilis n. sp.

The previously reported specimens need to be reexamined for correct identification (see under synonymy, for identification questioned). The specimens reported by Balss (1913b: fig. 19) from Japan and by Kim & Choe (1976: fig. 1) from Korea may be referable to U. scandens because of the elongate eyestalks although there is no mention or illustration of the antennal scale. The other possible species is U. articulatus that shares with U. scandens the elongate eyestalks but it is common in New Caledonia and vicinity.

The distributional range of the species appears to be restricted to Japan and the East China Sea, but exceptional is the male from the Solomon Islands (MNHN-IU-2014-16941) that could not be discriminated from the type material. This specimen is provisionally placed in this species until more material and molecular data become available. 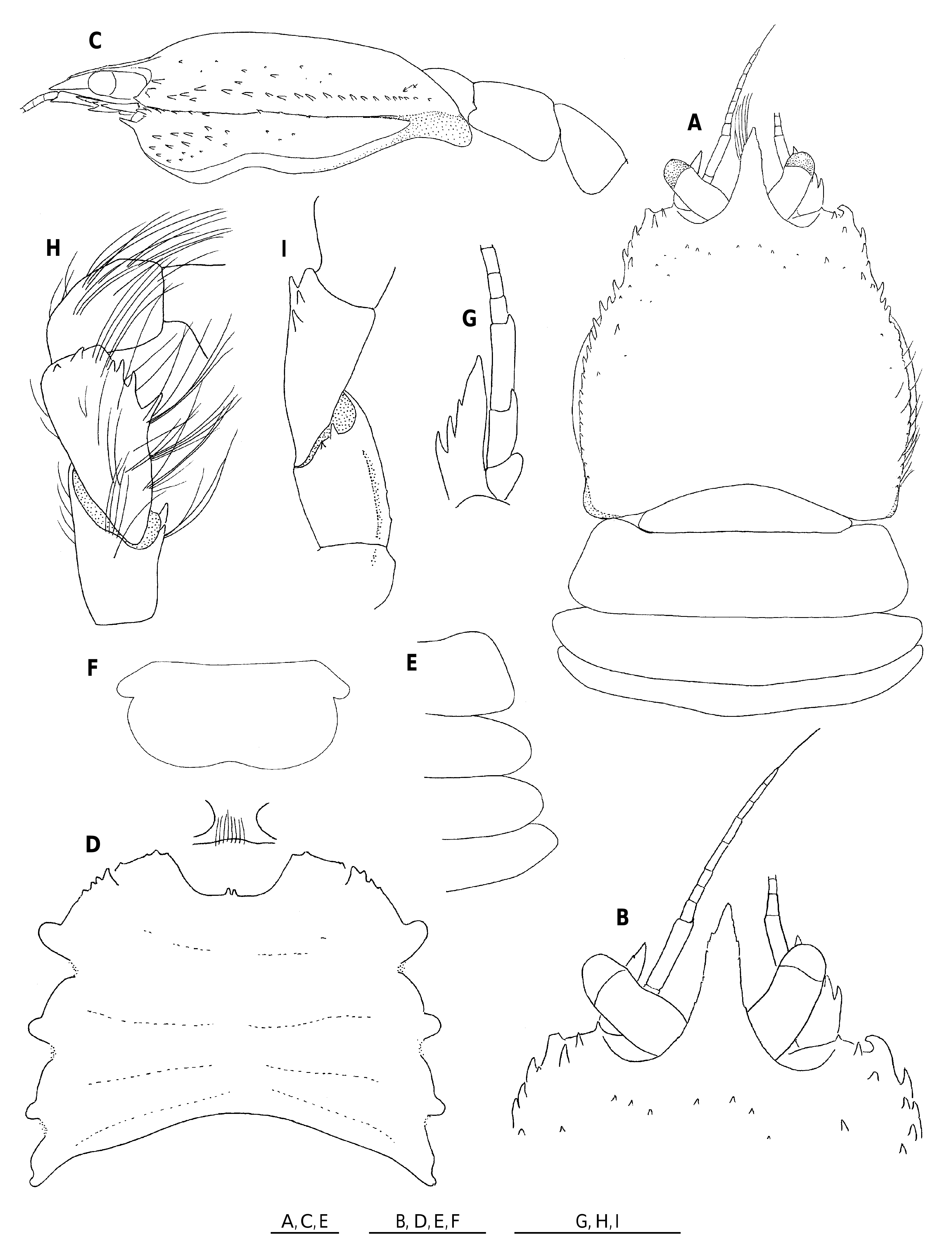 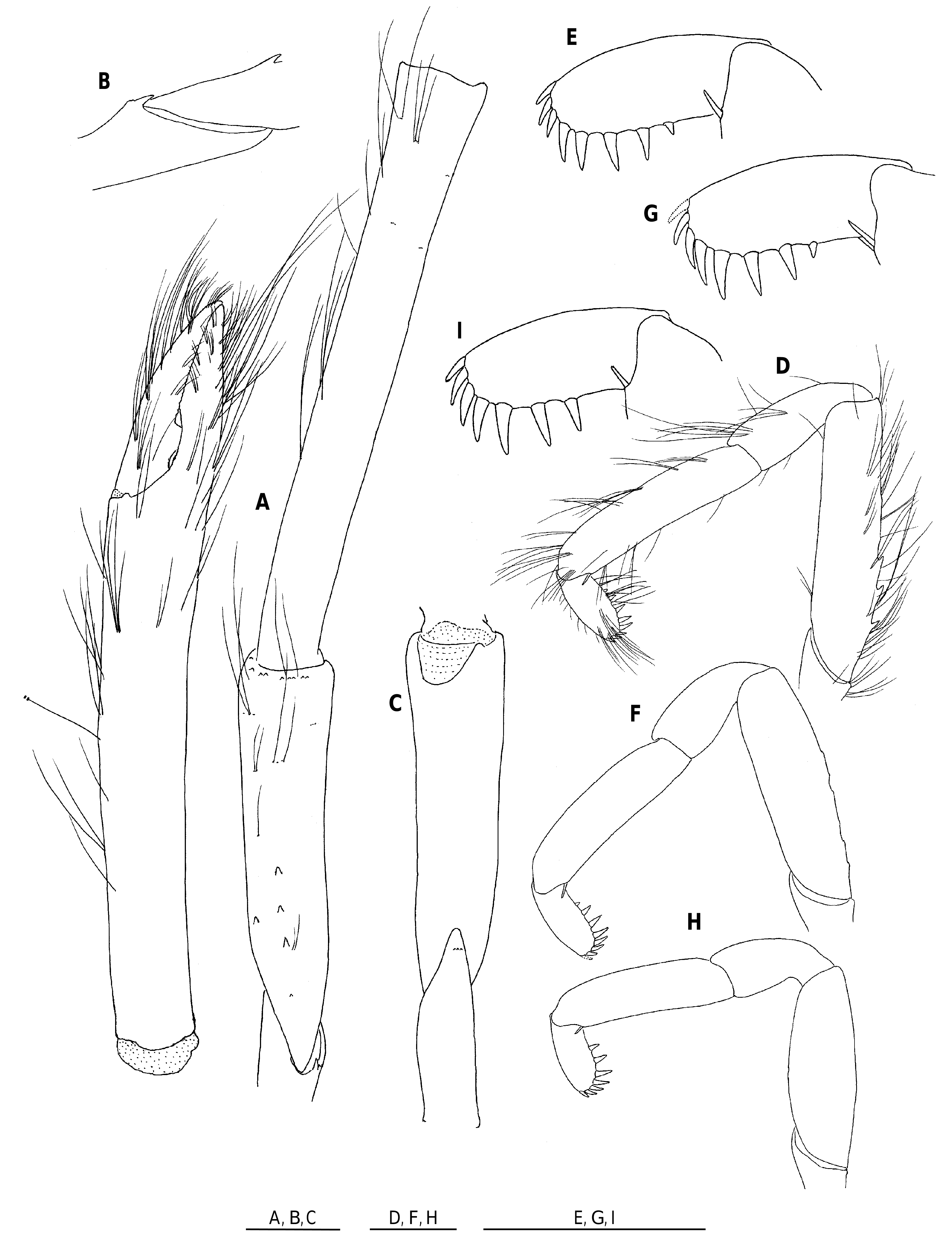