ETYMOLOGY„ From the Latin palmaris (pertaining to the palm of the hand) for the P 1 palm of the species which is massive and large relative to the carapace.

Mxp: Mxp1 with bases close to each other. Mxp3 sparsely setose except for distal 2 articles. Basis without denticles on mesial ridge. Ischium with more than 18 distally diminishing denticles on crista dentata, flexor margin not rounded distally. Merus about twice as long as ischium, with well-developed distolateral spine and 1 or 2 small spines distal to point two-thirds of cristate flexor margin; mesial face flattish. Carpus with distinct distolateral spine.

REMARKS — As suggested by the species name, the P 1 palm of the species is pronouncedly broad, often more than the distance between the anterolateral spines of the carapace.

Uroptychus palmaris somewhat resembles U. yaldwyni Schnabel, 2009 from the Kermadec Ridge, in having the anterolateral spine that is close to the smaller lateral orbital spine, the elongate eyes, an antennal article 5 that is slightly longer than article 4, and the P 2-4 dactyli that are longer than the carpi, with the ultimate spine much more slender than the penultimate spine. However, the new species is distinguished from that species by the following: the last carapace lateral spine is located at the midpoint instead of near the posterior end of the branchial margin; the anterior margin of sternite 3 is weakly instead of strongly excavated, with 2 very small median spines closely placed side by site instead of acute submedian spines separated by a distinct notch; the anterolateral margin of sternite 4 is twice instead of subequal to the length of the posterolateral margin, and the surface of the pterygostomian flap is more sharply angular, the surface being smooth instead of covered with small spines.

Uroptychus palmaris also resembles U. triangularis Miyake & Baba, 1967 in having two small, closely placed median spines on the concave anterior margin of sternite 3, but it differs from that species in having the branchial marginal spines rather small instead of short but broad at base, in having the P 2-4 meri unarmed instead of bearing a row of dorsal spines. At first glance, the carapace in U. palmaris is not so strongly broadened posteriorly as in U. triangularis (the greatest breadth is 1.8 versus 2.2 times the distance between left and right anterolateral spines). 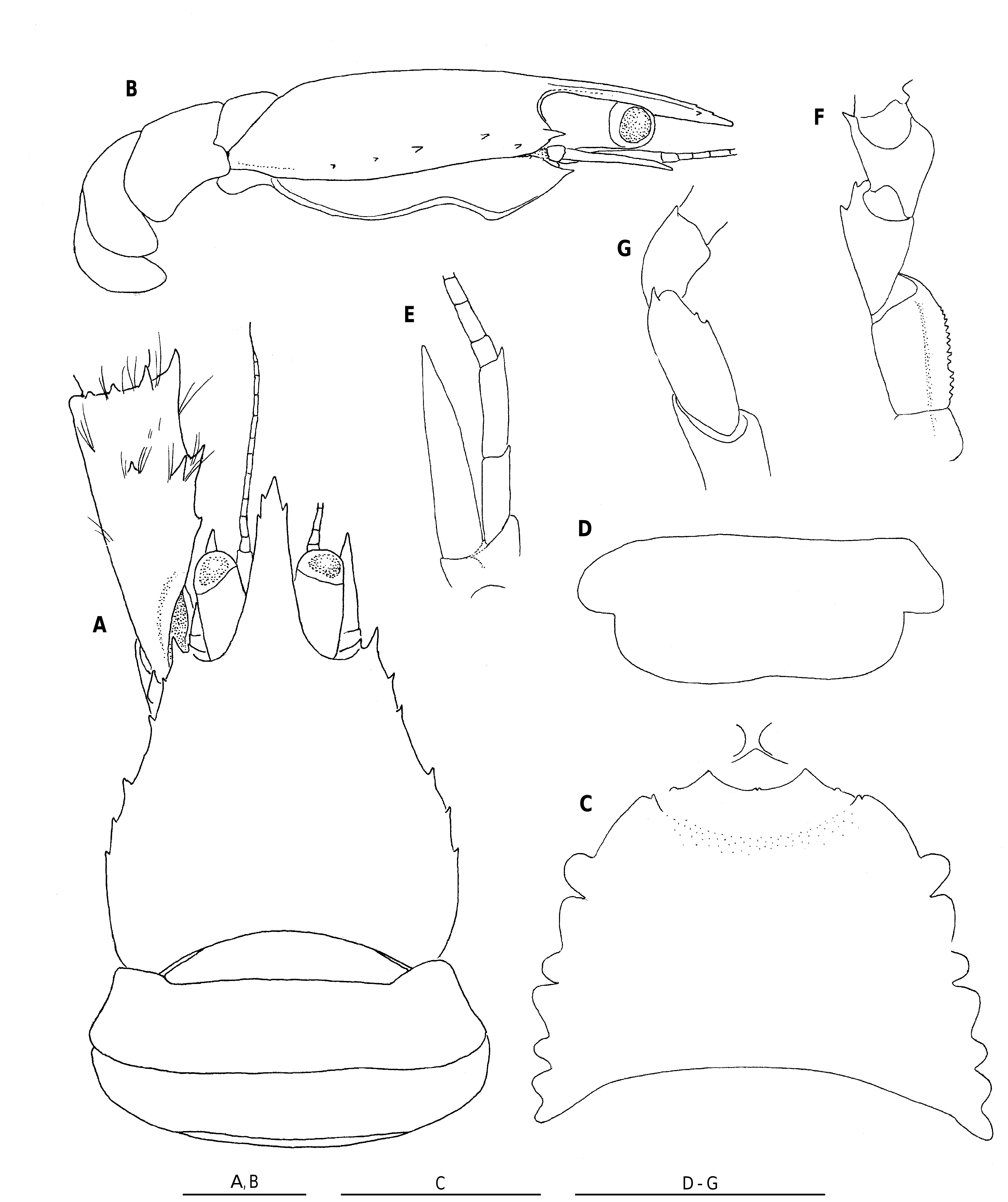