P 2-4: P 3 missing on both sides. P 2 and P 4 rather flattish, setose like P 1. P 2 much more slender than P 4, especially distal 2 articles; merus 5.9 × longer than broad, slightly longer than carapace, unarmed; carpus 0.4 × length of propodus, slightly shorter than dactylus; propodus distally narrowed, 6.2 × longer than broad at proximal portion of greatest breadth; flexor margin ending in pair of spines preceded by 1 spine; length about twice that of dactylus; dactylus moderately curved, flexor margin with 8 spines, ultimate slender, penultimate pronouncedly broad, remaining spines small (discernible under high magnification), oriented parallel to margin and loosely arranged. P 4 merus 3.5 × longer than broad, 0.7 × as long as and 1.2 × broader than P 2 merus, 0.9 × length of P 4 propodus; carpus as long as that of P 2, slightly less than half length of dactylus; propodus and dactylus longer and broader than on P 2; propodus 2.8 × length of carpus, flexor margin ending in pair of spines preceded by 1 spine; dactylus 2 × length of carpus, 0.7 × length of propodus, well compressed, flexor margin somewhat curved, with strongly inclined spines distinctly larger than those on P 2, penultimate 2 × broader than antepenultimate, proximally preceded by 11 blunt spines nearly contiguous to one another, ultimate more slender than antepenultimate.

REMARKS — The new species is unique among the species of Uroptychus in having the propodus and dactylus of P 2 much more slender and shorter than those of P 4, with the dactylar spination different between P 2 and P 4 ( P 3 is missing in this species): the flexor marginal spines proximal to the pronounced penultimate spine are small, oriented parallel to the flexor margin and loosely arranged on P 2, whereas these spines are larger, strongly inclined and nearly contiguous to one another on P 4. The slender P 2, which is different from P 3 and P 4 in lacking flexor marginal spines on the dactylus, is one of the diagnostic characters of Uroptychodes Baba, 2004 . This species may likely be shifted to a different genus but is provisionally placed under Uroptychus awaiting molecular analysis.

The new species has the lateral carapace margin bearing a row of spines, the anterolateral spine of the carapace is smaller than the lateral orbital spine, the penultimate of the P 2-4 dactylar spines is twice as broad as the antepenultimate, and the ultimate of the same is more slender than the penultimate, all characters shared by U. pronus Baba, 2005 . Uroptychus diaphorus differs from that species in having the antennal scale overreaching the antennal article 5 instead of barely reaching the tip of that article, in having both the P 2 and P 4 meri unarmed instead of bearing a row of spines along the dorsal margin, and more distinctly in having a different spination between P 2 and P 4 (see above). 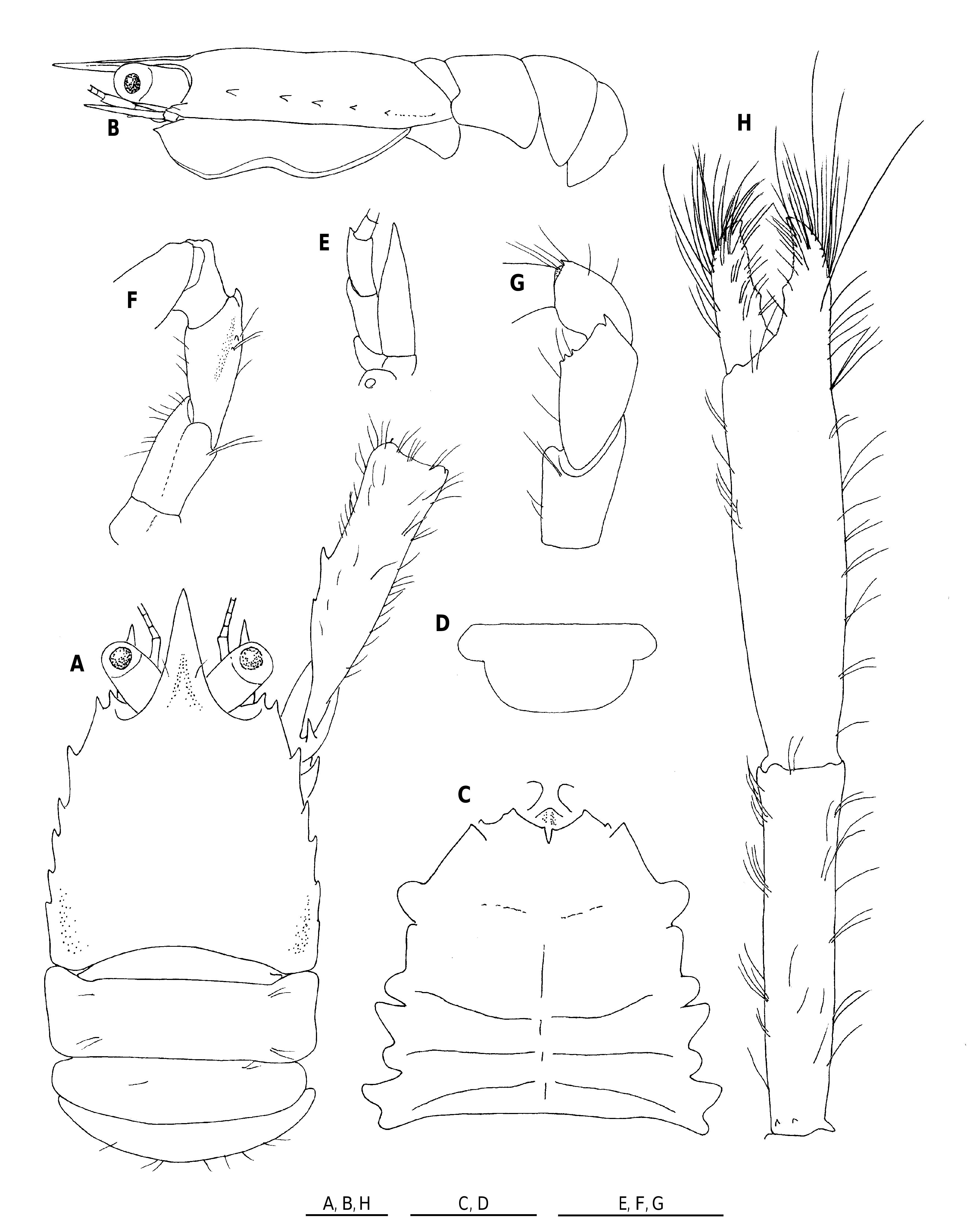