ETYMOLOGY„ Named for the BERYX 11 cruise by which the new species was collected; used as a noun in apposition.

DESCRIPTION„ Small species. Carapace: Slightly longer than broad (length 1.06 × breadth); greatest breadth 1.7 × distance between anterolateral spines. Dorsal surface feebly convex from anterior to posterior, without distinct groove, with sparse short setae, unarmed except or a few spinules on hepatic region. Lateral margins slightly divergent posteriorly, with row of about 10 small lateral spines along entire length; anterolateral spine slightly falling short of tip of lateral orbi- tal spine; spine at anterior end of branchial region well developed, preceded by 1 or 2 small spines, with accompanying smaller spine dorsomesial to it, followed by 7 spines (first of these much smaller and ventral to level of remainder, last closer to posterior end than to preceding). Rostrum slightly deflected ventrally, deeply excavated dorsally, with 2 subapical spines (proximal obsolescent) on lateral margin; length about half that of carapace, breadth somewhat more than half carapace breadth measured at posterior carapace margin. Lateral orbital spine well developed, slightly smaller than anterolateral spine, both situated at same level and close to each other, but not contiguous in dorsal view.

Eye: Relatively broad (1.6 × longer than broad), with subparallel lateral and mesial margins, overreaching midlength of rostrum, falling short of rostral tip. Cornea not dilated, half as long as remaining eyestalk.

REMARKS — The new species resembles U. multispinosus Ahyong & Poore, 2004 and U. vicinus n. sp., in having the anterolateral spine slightly larger than or subequal to the lateral orbital spine and in having the anterior margin of sternite 3 with median notch. Uroptychus beryx differs from U. multispinosus in the following features: the rostrum is as long as instead of longer than broad; the antennal scale is slightly broader instead of more than twice broader than article 5, falling short of instead of extending far beyond the apex of article; the antennal article 5 is unarmed instead of bearing a distinct distal spine; the P 2-4 meri bear spines instead of being unarmed on the dorsal crest; and the P 2-4 dactyli bear more numerous and more closely arranged flexor spines (9 or 10 instead of 6 or 7 spines that are more loosely arranged). The relationships with U. vicinus are discussed under that species (see below). 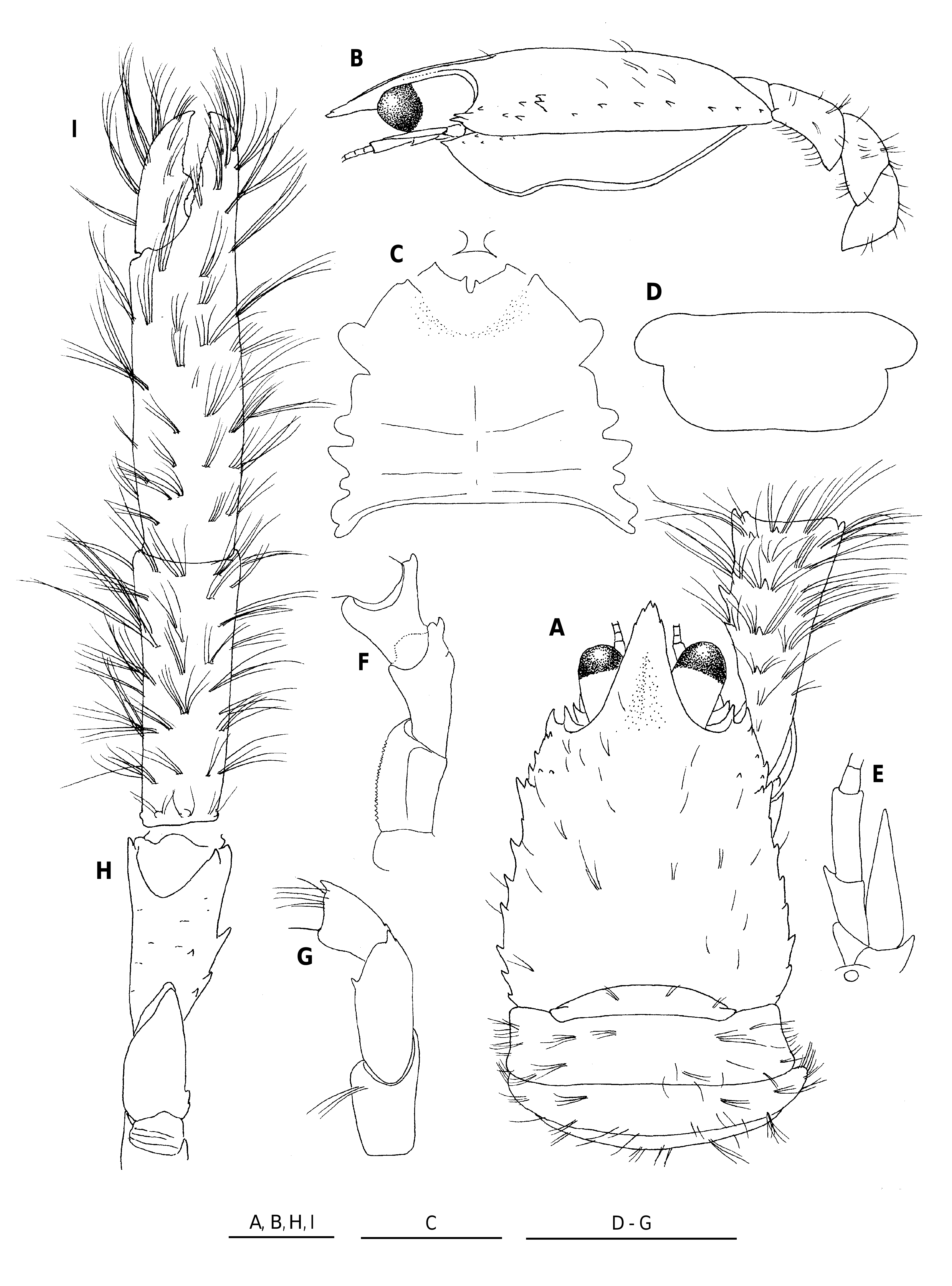