Etymology. This specific epithet is derived from the masculine Latin noun, favonius , used in apposition, a word meaning ‘west wind’, in reference to the fact that this species is only known from west of the Andes.

Distribution. ( Fig. 3 View FIGURE 3 ): Based on the examined specimens, this new species is distributed from Costa Rica to northwestern Ecuador.

Biology. In western Ecuador, E. favonius occurs in wet lowland rainforest from 70–900 m elevation, where it is uncommon. Males were only encountered on prominent hilltops, where they perched and patrolled singly approximately 1 m above the ground at the edges of light gaps in the mid-morning. Females were observed both on hill and ridgetops as well as hillsides, flying along trails in the primary forest understorey about 1–2 m above the ground from midday to early afternoon.

Taxonomy of Euptychia meta and E. favonius . Weymer (1911) described E. meta based on an unspecified number of specimens from Marcapata, Peru. Although only one syntype in the ZMHU has so far been located (a female), examination of the original description indicates that Weymer believed that he had examined both sexes. In plate 46 the dorsal surface of the female is figured, but the sex is not mentioned and it is difficult to judge whether Weymer correctly realized that this species was sexually dimorphic. Therefore, additional syntypes (if they exist) might consist just of female specimen(s). The single known female syntype ( Fig. 1 View FIGURE 1 D) exhibits an undulating marginal band on both ventral wings, similar to E. favonius in this respect. However, the ventral hindwing submarginal band and outer ring of concentric submarginal ocelli are both typical of other east Ecuadorian E. meta and are distinct from those of E. favonius (see diagnosis). Since cryptic species are frequently found in euptychiine butterflies (e.g. Cong & Grishin 2014), we designate this female syntype ( Fig. 1 View FIGURE 1 D, forewing length = 17mm) in the ZMHU with the following labels as the lectotype of E. meta in order to stabilize the nomenclature and allow confident identification of E. favonius : LECTOTYPE ♀ Euptychia meta Weymer designated by Lee D. Miller. 1989 // Marcapata Cuzco // genitalia vial M-9055 ♀ Lee D. Miller.

Euptychia meta and E. favonius are clearly sister taxa, based on both morphological and molecular data (Nakahara, unpublished data), and given their allopatry they could arguably be regarded as conspecific. However, the small but consistent wing pattern differences are similar in extent to those distinguishing other sympatric, closely related Euptychia species (Nakahara, unpublished data). Moreover, the significant divergence in COI, which is of an order of magnitude greater between the two taxa than within the two taxa, suggests that separate species status is warranted. 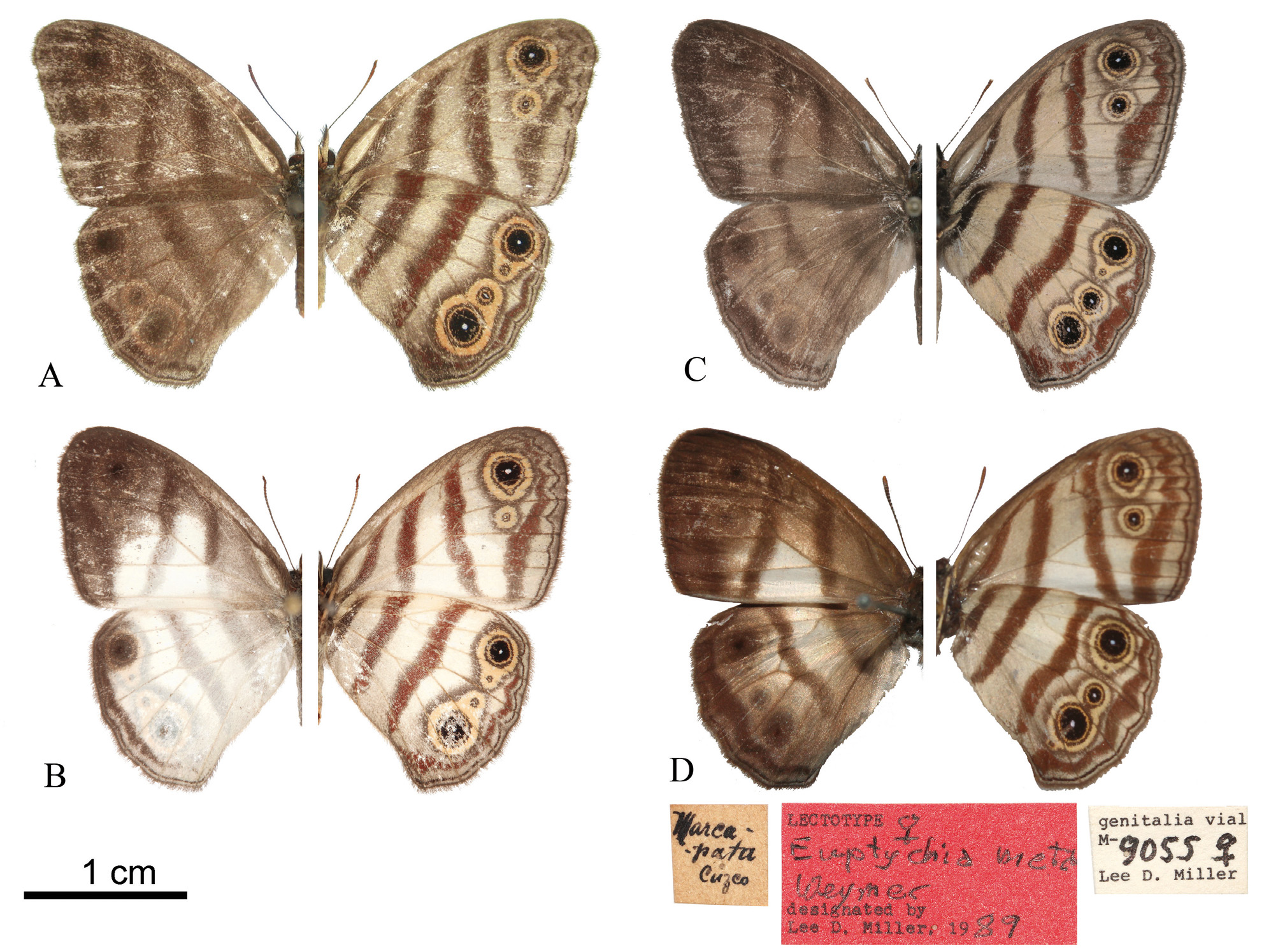 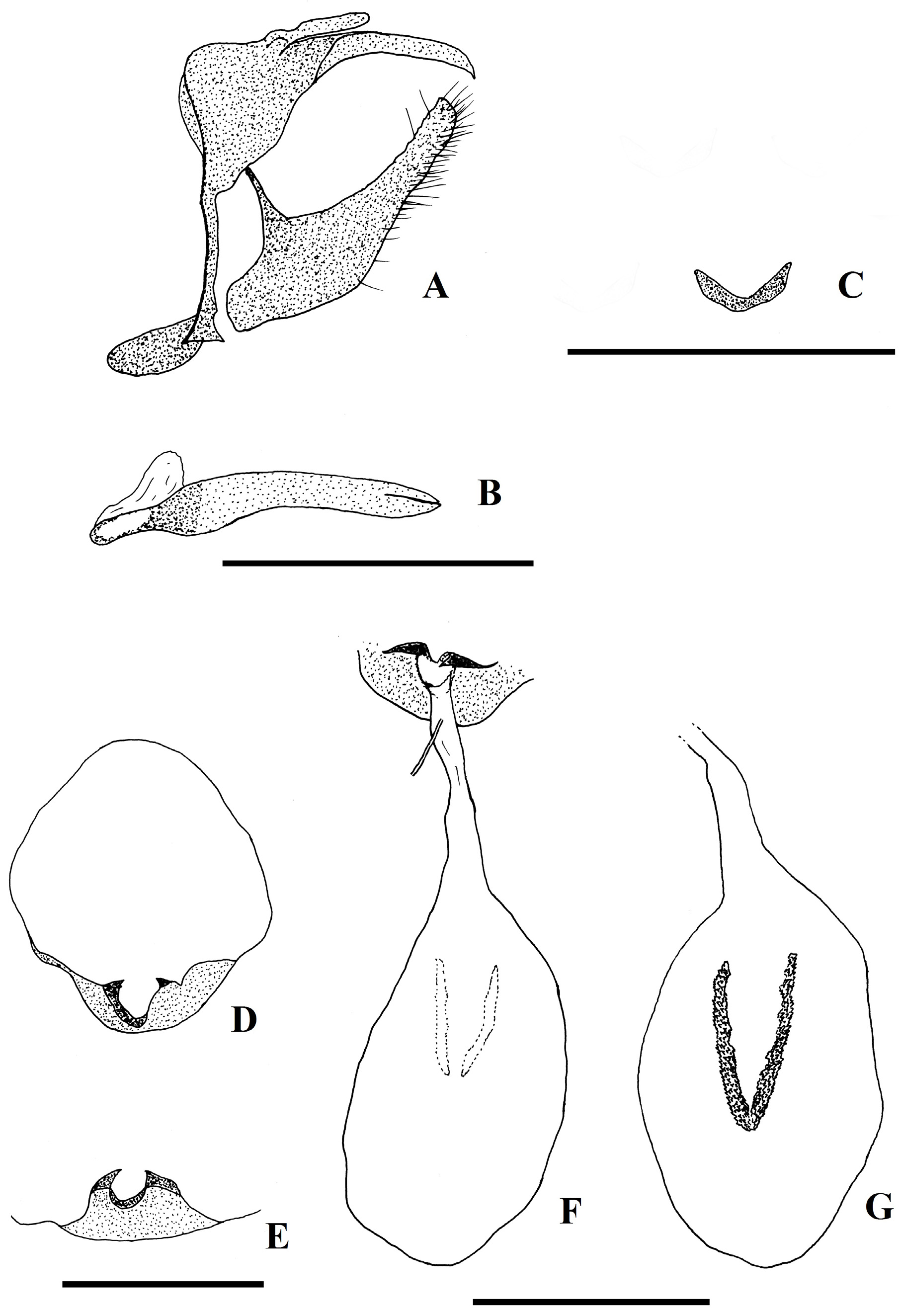