Head moderately slender, slightly wider at opercles than the maximum body width. Snout moderately long and pointed distally. Mouth terminal, moderately large, extending beyond anterior margin of eye; tip of lower jaw slightly upturned, with small blunt fleshy tip. Postorbital head length less than half of head length. Eye round, diameter 5.8 (5.5–6.0) in HL. No light organs in front of or on lower margin of eye. Interorbital flattened, width 8.2 (7.7–8.6) in HL, with two lateral, compressed, longitudinal ridges on each side.

Gill rakers ( Fig. 2C View FIGURE 2 ) somewhat rudimentary and not easy to observe without staining; well developed in outer the two arches and poorly developed on the two inner arches. Each raker with 2 or 3 (mainly 2) short teeth. First arch with 3 small rakers on epibranchial, 15 on ceratobranchial, and several on posterior half of hypobranchial, those on anterior half with their bases fused to each other ( Fig. 2C View FIGURE 2 ). Single row of small teeth on fifth cerotobrachial. Four gill arches, filament present on the first to fourth arches. The fourth mostly connected to the gill wall by membrane. Pseudobranches present, inside a deep pocket above first gill arch.

Body devoid of scales, except for lateral-line scales originating from above pectoral girdle and running to above about posterior third of anal-fin base. Anterior lateral-line scales slightly wider than high, gradually becoming smaller and becoming narrower posteriorly; those in anterior half of lateral line with concave on upper and lower margins; each scale with 3 pores above and below the posterior portions, the anteriormost one largest; posterior scales with only 1 pore in general.

Anterior half of snout and lower jaw densely covered with chromatophores, somewhat blackish; other parts of head with unevenly and loosely scattered chromatophores. Top of head brownish. All fins blackish, except for pale pectoral fin sometimes with few chromatophores.

Nine saddles on ventral margin; 4 on abdomen before VFO, 5th at pelvic fin base; 6th at midpoint of V–A, 7th right at anterior quarter of anal-fin base, its base much longer than others; 8th right above posterior 1/3 of anal-fin base; and the last on caudal peduncle, fused with the last saddle of dorsum, forming a wide band.

Size. The largest specimen examined in this study is 161 mm SL.

Distribution. Known from eastern Indian and western Pacific oceans off the Philippines (Sulu Sea; Western Pacific Ocean), eastern Java, Indonesia and Northwest Shelf of Australia. Specimens were collected by bottom trawl at continental slope (396–514 m), except for one collected by mid-water trawl (40–180 m) at night.

Etymology. The specific name is combination of retro means behind and dorsalis mean back, here the dorsal fin, in referring to the backward position of dorsal fin. 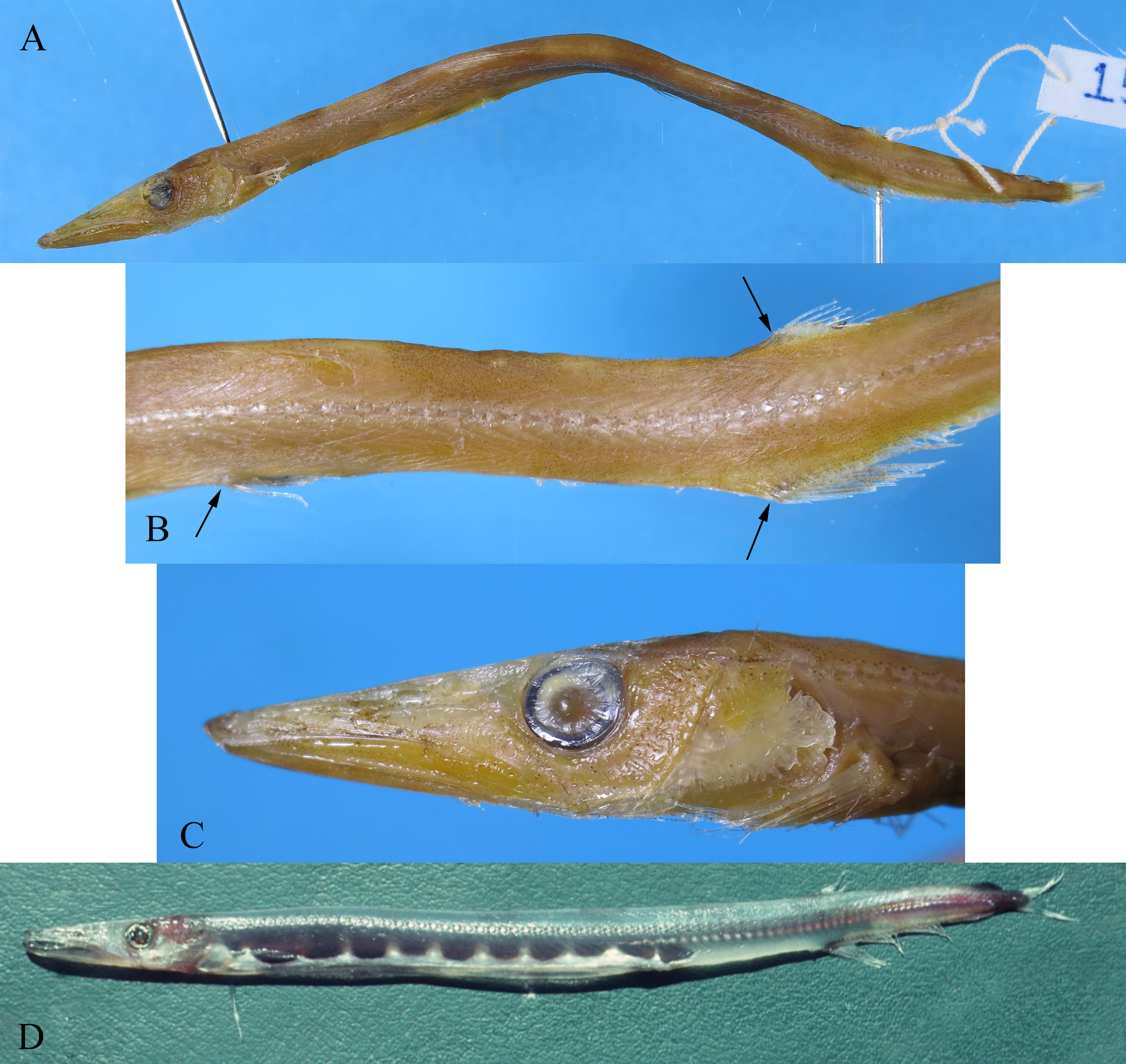