Original generic description: “Genus PROMETOPIDIA , nov. Proboscis fully developed; palpi porrect, slender, hardly reaching as far as the large conical frontal prominence; antennae of male laminate; legs slender; wings slender; forewing with the termen oblique; vein 3 from close to angle of cell; 5 from middle of discocellulars; 7, 8, 9, 10 stalked from before upper angle; 11 approximated to 12, then 10. Hindwing with vein 3 from before angle of cell; 5 obsolescent from middle of discocellulars; 7 from before upper angle; 8 approximated to cell to middle.”

Thorax. Wings with basal and medial transverse lines absent, fovea in male absent; base of veins Sc and R 1 in hindwings swollen, frenulum present. Index of spurs 0-2-4, hindlegs not dilated.

Pregenital abdomen. Tympanal organs large, ovoid, flattened on tympanum side, basal half of ansa with a lateral curvature and a knob at middle, membranous extension on one side only, opposite to curvature, with straight outer margin; lacinia absent, but a transverse band of sclerotization present; supporting sclerites of phragma between 1 st and 2 nd segment strap-like, tapering in width towards ventral side ( Fig. 4i View FIGURE 4 ); 1 st and 2 nd tergites and sternite 1+2 sclerotized in males, in females additionally posterior half of 7 th tergite sclerotized and the distal margin lined with a dense row of two types of modified scales (type 1 stiff, elongate, slightly broadening towards forked apex; type 2 setous); in females only, the distal margin of the 7 th sternite bears a sclerotized, spatulate process of varying shape, very densely covered with modified scales like those on 7 th tergite, but smaller ( Fig. 4g View FIGURE 4 ; Yazaki, 1995: 18, fig. 575).

Male genitalia with uncus long, narrow, stick-like, strongly bent ventrad near the broadly triangular base, remaining part slightly curved, decorated with a few long setae in the middle, tip a curved spine. Gnathos with long, very narrow lateral arms and a broader, moderately sclerotised, band-like medial part, subanal plate present. Valves elongate, tip rounded, medial surface setous on distal two thirds, setation very dense with longest setae towards costa. The latter broadly sclerotized up to two thirds, broadest in the middle. Sacculus not developed. Valves at base of outer surface with moderately developed coremata, bearing a brush of strong setae exceeding the valves in length. Hemi-transtillae band-like, tapering to a point towards middle, there touching each other, medial parts gently curved dorsad. Juxta of a complicated shape: broadly plate-like at base, then roundly incurved and fringed with long setae (“crista-hairs”), more distally broadening to arm-like processes, narrowed again, distally with a deep incision and finished by a roof-like plate. Saccus small, hardly extending beyond valve bases. Aedeagus narrow and rather short, vesica with a large field of numerous, small teeth.

Female genitalia (terminology following Skou & Sihvonen, 2015) with ostium bursae moderately funnelshaped, membranous, ductus bursae partly sclerotized (“colliculum”) or without sclerotized part. Posterior part of corpus bursae narrow, weakly sclerotized, fluted, broadening abruptly or gradually towards anterior part or extended into it, the latter membranous, with a stellate signum. At the transition between anterior and posterior part of corpus bursae a broad, ring-like area present which is more strongly and irregularly fluted and scobinate. Abdominal segment A8 reduced to a heavily sclerotized ring, broader dorsally, ventrally consisting of narrow arms, tapering towards middle, covered partly with elongated scales, with a small, medio-ventral gap for the genital opening, the latter membranous, without any ornamentation. Apophyses anteriores relatively short and stout, with triangular bases and enlarged apices. Papillae anales strikingly modified, floricomous ( Pierce, 1914), consisting of a collar of numerous, very long, incurved setae, arising from baso-lateral pad-like structures; in the centre between them an ovally cylindrical tube with a double line of specialized, strongly sclerotized setae, their bases straight and with distinct, sharply pointed hooks distally. Apophyses posteriores rather straight, narrower and longer compared to the apophyses anteriores.

Biology, phenology, habitats. Immature stages and hostplants are unknown, though, regarding the collecting sites at Joshimath, Quercus may be the most probable hostplant: more than 80% of the specimens collected come from localities where oak-trees are dominant (see Introduction and Fig.1 View FIGURE 1 , b–d). Adults are on the wing in April and May ( conisaria , joshimathensis ) and in July ( joshimathensis of Shimla, Punjab, perhaps a second generation).

Habitats are mainly situated at elevations between 1600m and 2500m, rarely lower or higher.

Systematic position. Prometopidia belongs to the tribe Baptini . Holloway [1994: 58] provided a detailed diagnosis of the tribe Baptini and he analysed for this purpose the morphological characters of a large number of East Asian genera of potential Baptini , but also includes the typical genus Lomographa Hübner [1825] . He mainly refers to a number of characters of the male genitalia as potential synapomorphies for the tribe: a gnathos which is weak or absent; a broad, immaculate costal zone and a central zone of long setae on the valve; coremata which are present at the base of the valve; socii which are present in most genera; absence of two characters abundant in other Geometridae : a transverse group of setae (“setal comb”) on male third abdominal sternite and no fovea on male forewing. These characters are also shared by Prometopidia .

Skou & Sihvonen (2015) summarized the published knowledge about the classification of European Ennominae genera into tribes. For the tribe Baptini they noticed that the geographical extent and the number of included species is unclear and no convincing synapomorphies for this tribe have been identified, except potentially the swelling of the base of the vein Sc in the male hindwing and, as also mentioned by Holloway, [1994: 58] the weakly developed or absent gnathos in the male genitalia, both characters shared by Prometopidia Hampson, 1902 (gnathos weakly developed in Prometopidia ).

Moreover, the very finely ciliate male antennae agree with those of Lomographa Hübner [1825] , the genus which typifies the tribe Baptini . Lomographa also possesses a distinctive venational character which it has in common with Prometopidia : vein R 2 in the forewing arises from the common stalk of R 3 –R 5. All those characters shared clearly confirm the systematic position of Prometopidia as a member of the tribe Baptini .

On the other hand, Prometopidia exhibits a number of characters not shared with other genera of Baptini , as far as we know: the conical frons in males and females; the spatulate process on posterior margin of female 7 th abdominal sternite, the strongly modified 8 th abdominal segment and the special floricomous condition of the ovipositor in females, with short, strong, hook-like setae (see fig. 3f).

The function of a typical floricomus ( Pierce, 1914) is still not satisfactorily clarified. It is assumed, however, that “females use the floricomous, scoop-shaped setae of the papillae anales to scratch particles from the surface of the bark to cover and camouflage eggs” ( Skou & Sihvonen, 2015, referring to Rajaei, 2010 and Rajaei et al. 2012). The dense collar of elongated setae surrounding the scoop-shaped setae may support this function by brushing aside or distributing the particles. The special “ Prometopidia -floricomus” with very strong, short, hooked setae instead of long, flexible, scoop-shaped ones may have a similar function, but is adapted for more resistant material. Both types of floricomus are building together with the similarly modified 8 th abdominal segment (which is reduced to a heavily sclerotized, ring-like structure with short, strong apophyses anteriores) a functional unit. It is present in all species possessing a floricomus and most likely enables a free, powerful movement of the ovipositor.

Remarks. With exception of the spatulate process on female 7 th abdominal sternite and the hooked setae of floricomus, all or some characters of Prometopidia mentioned above are found also in a group of genera which are characterised by possession of a typical floricomus, as known before since more than a century ( Pierce, 1914) (but not well-known at all) and figured in detail by Skou & Sihvonen (2015: 364, Text-figures 118–121): with modified, flexible, scoop-shaped setae, arising from pads of different shape on the papillae anales. These genera are Theria Hübner, 1825 (mainly European), Aleucis Guenée, 1845 (Europe, Turkey, Levante, Caucasus, Turkmenistan), both placed in the Theriini recently ( Skou & Sihvonen, 2015), Ramitia Viidalepp, 1988 ( Tadzhikistan, Turkmenistan, N. Iraq, SE. Turkey), Epitherina Wehrli, 1938 ( Iran), Heterobapta Wiltshire, 1943 ( Iran, Tadzhikistan, Afghanistan), Earoxyptera Djakonov, 1936 ( Mongolia). The last-mentioned four genera are generally similar to Aleucis in the structure of the male genitalia and may also belong to the Theriini . To decide this, more detailed studies are required, including also female genitalia and DNA sequence analyses which is beyond the scope of the present paper.

A very similar, typical floricomus has also been found in the two unrelated genera Gnopharmia Staudinger, 1892 and Neognopharmia Wehrli, 1951 , which are members of the tribe Macariini . The question how such highly apomorphic structures could have developed independently is still unresolved and additional detailed studies are needed. 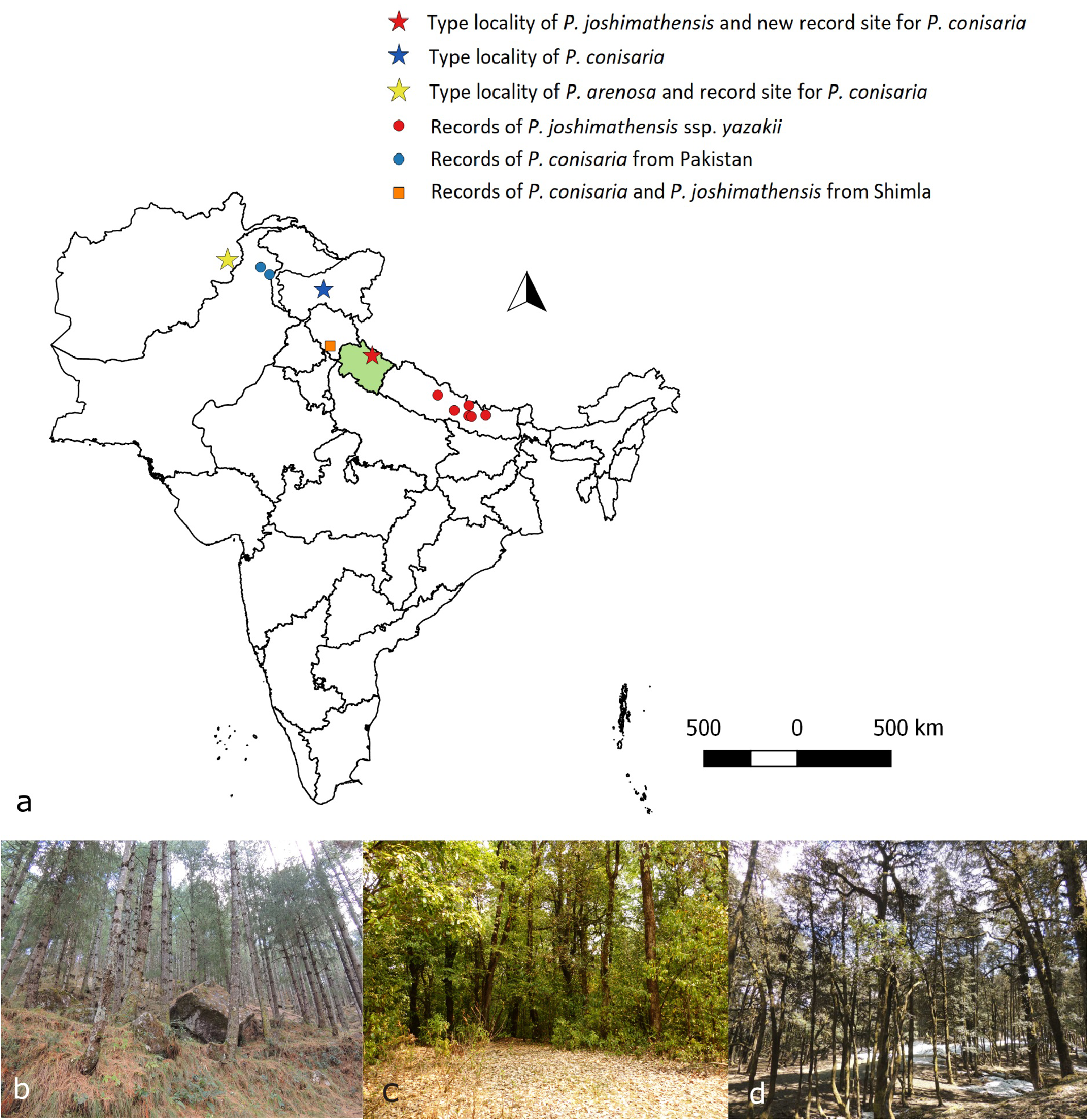