Shape, color and consistency. At Santa Marta and the Gulf of Urabá ( Valderrama & Zea 2013) this species occurs as thick encrustations, generally up to 5 mm in thickness and 15–20 cm in the larger diameter (thicker specimens were observed in Urabá). In other areas of the Colombian Caribbean, it occurs as erect, ramified and anastomosing branches arising from a common base, up to about 30 cm tall, 1–3 cm thick; sometimes branches can be crooked and repent. Live, the surface is smooth and undulated to conulose, with scattered oscules, up to 4–5 mm in diameter, within which the confluent, exhalant canals are readily seen; sometimes a thin membrane rims the oscules. Out of the water the thick pinacoderm collapses, resulting in an irregular surface with conules and tubercles up to 2 mm high and up to 3–5 mm apart. External color whitish pink; flesh red. In situ, elevated areas look red, depressions pink, the latter forming an irregular network. The surface of some specimens is fouled by bright orange zoanthids. Consistency compressible, tougher at the conules-tubercules.

Skeleton. Ectosome relatively thick, with the pinacoderm supported by brushes of auxiliary subtylostyle spicules. Choanosome non-cavernous. Skeleton is a network of erect and interconnecting spongin fibers, 28–110 µm in diameter, arising at the substratum from a basal plate of spongin, up to 19 µm thick; the meshes are irregular, 95–400 µm, with rounded corners; towards the conules and tubercles, fibers are anastomosed in fibrofascicles 475 – 110 µm wide. Fibers are cored by tracts of 1–4 principal styles and, at irregular intervals, by tracts up to 7–8 choanosomal subtylostyles, organized in tufts or plumose tracts; accessory acanthostyles echinate heavily the fibers at rather irregular intervals; many subtylostyles are located in confusion among meshes. Towards the ectosome, a few principal styles arise from the fiber ends, from which brushes of auxiliary subtylostyles, mostly of the smaller category, support the ectosome. Spicules (Table 1): (1) Large, thick, slightly curved principal styles with smooth heads, 190– 280.3 – 342 µm by 8.1– 11.4 – 19 µm. (2) Thin, mostly straight accessory subtylostyles with telescopic, pointed ends, in two size categories by spatial location, with a few intermediate sizes: large, subectosomal and choanosomal ones, 218– 294.1 – 351 µm by 2.4– 4.8 – 7.1 µm, and small, ectosomal ones, 105– 150.6 – 223 µm by 1.0– 2.9 –4.3 µm. (3) Accessory echinating acanthostyles, relatively short and stout, with large spines, and characteristically spined in the head and in the distal half of the shaft, leaving the basal half mostly smooth, 48– 59.6 – 69 µm by 4.6– 6.3 – 7.5 µm. (4) Toxa in two categories: long, oxeote to rhaphidiform, 194 – 253.0 – 351, and smaller, wing-shaped ones, 16– 62.5 – 138 µm. Tiny, oxhorn toxa, ca. 5 µm, were observed in some specimens. (5) Palmate isochelae, 11.5– 14.6 – 16.7 µm; a few, tiny isochelae, 4.6–6.9 µm, were seen in spicule preparations of Santa Marta specimens.

Remarks. Gómez (2014) also found encrusting and erect specimens along the Yucatan Peninsula in Mexico. Indeed, there are other Clathria   species with encrusting and erect morphs [e.g., Clathria (Thalysias) curacaoensis   , see below; Clathria (Microciona) echinata ( Alcolado, 1984)   , see van Soest (1984) and Zea (1987), as C.(M.) simpsoni   ]. The apparent geographical and ecological variation in predominant morphotype (thickly encrusting to massive in wave-exposed shores of Santa Marta and Gulf of Urabá vs. erect-branching in exposed deeper reef habitats of Cartagena, Old Providence and other localities), is intriguing and needs to be investigated. The presence of tiny chelae and oxhorn toxa in this species was also reported by Gómez (2014), regardless of habit.

This species is clearly separated from other Caribbean Clathria   by the characteristic spination of the accessory acanthostyles. When encrusting, it is distinguished from other species by its greater thickness, presence of conules, red color and tougher consistency. Among Caribbean shallow Clathria   that are branching, it may be confused with orange-yellow C. curacaoensis   , which also has the smaller category of chelae next to smooth, principal styles; the latter is distinguished from C. virgultosa   by its larger styles and auxiliary choanosomal subtylostyles, the latter of which have microspined heads; also, the acanthostyles have larger spines in C. virgultosa   and are located everywhere along the fibers, in contrast to the smaller spines and particular localization at the basal spongin sheet, and at branching areas of the fiber network in C. curacaoensis   . The latter species also lacks the large, oxeote toxa. In the field, C. virgultosa   could also be confused with erect, bushy and branching specimens of the sponge Monanchora arbuscula   , and analysis of spicules may be required to tell them apart. Clathria (Microciona) foliacea Topsent, 1889   Clathria (Clathria) carteri Topsent, 1889   , recently redescribed from the Gulf of Mexico and the Yucatan Peninsula are red-orange foliose and bushy species that may be confused with C. virgultosa   ; for details see Gómez (2014).

Material of Rhaphidophlus juniperinus   listed by Reyes & Campos (1992) from Santa Marta mangrove roots, then identified by S.Z., was revised again (INV-POR 0428) and found to belong to C. (T.) curacaoensis   . The record of R. juniperinus   by Pulitzer-Finali (1986) should be confirmed by reexamination of the material, as it does not mention acanthostyles, whose size and shape are quite characteristic in this species; the record of Wintermann- Kilian&d Kilian (1984) is assumed to be correct on the basis of their collecting locality, Bahía de Nenguange, where part of the present material comes from. Examination of uncatalogued material (tissue slides) of R. juniperinus   material from Rozemeijer & Dulfer (1987) showed that it does not belong to C. virgultosa   for the presence of larger acanthostyles, different in shape from those of this species; its identity remains uncertain.

Rhaphidophlus basiarenacea Boury-Esnault, 1973   is an encrusting, light maroon (preserved color) Clathria   ( Thalysias   ) found in the Fernando de Noronha Archipelago in NE Brazil (holotype pictured in Muricy et al. 2011, Fig. 13 View FIGURE 13 D). From its description, besides a layer of sand at the base of the skeleton, it is not possible to distinguish it from C. (T.) virgultosa   , especially from its smooth principal styles, its acanthostyles heavily spined at the head, and the presence of long, oxeote toxas. Detailed revision of the type and additional materials is needed to determine if it is a different species. 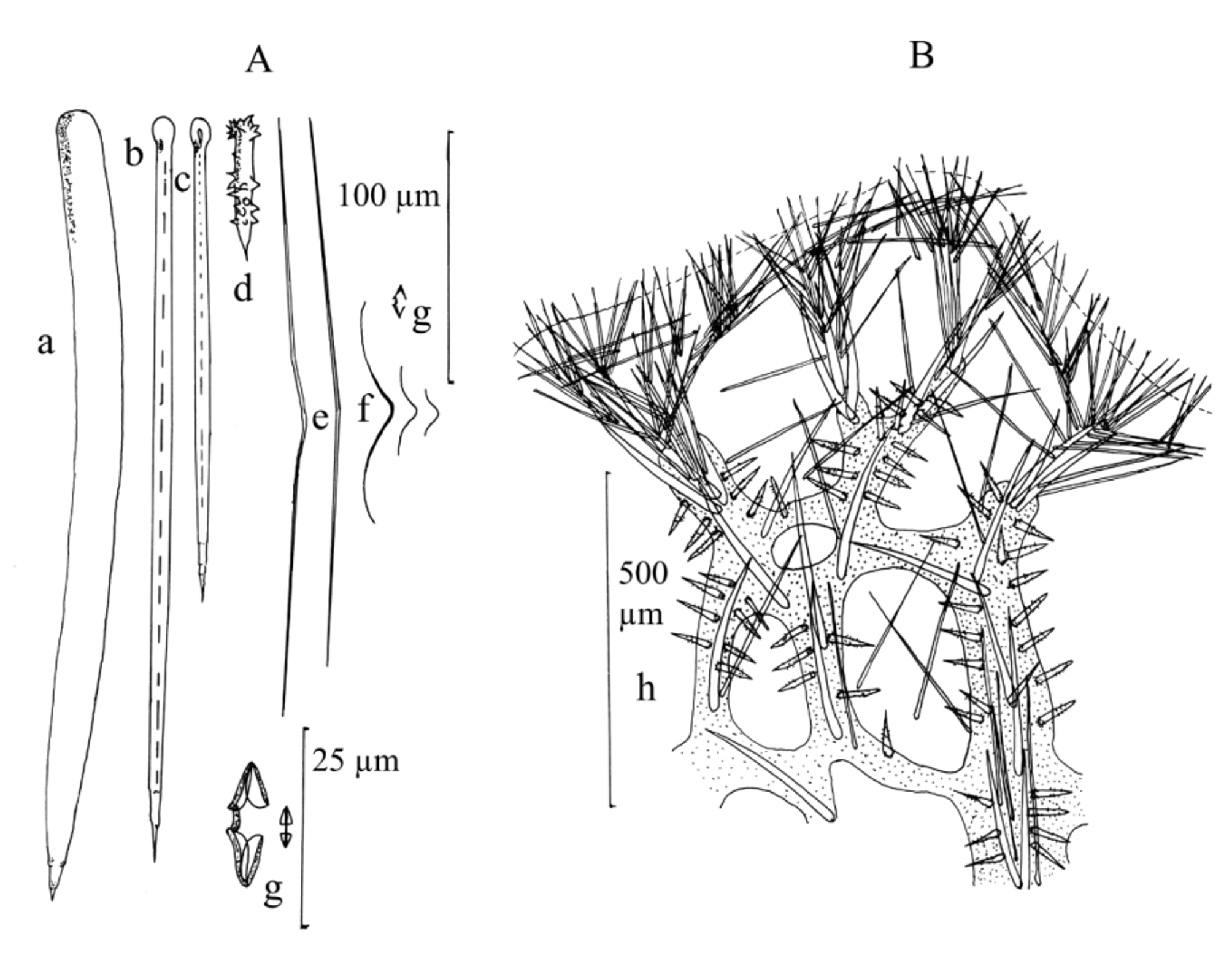 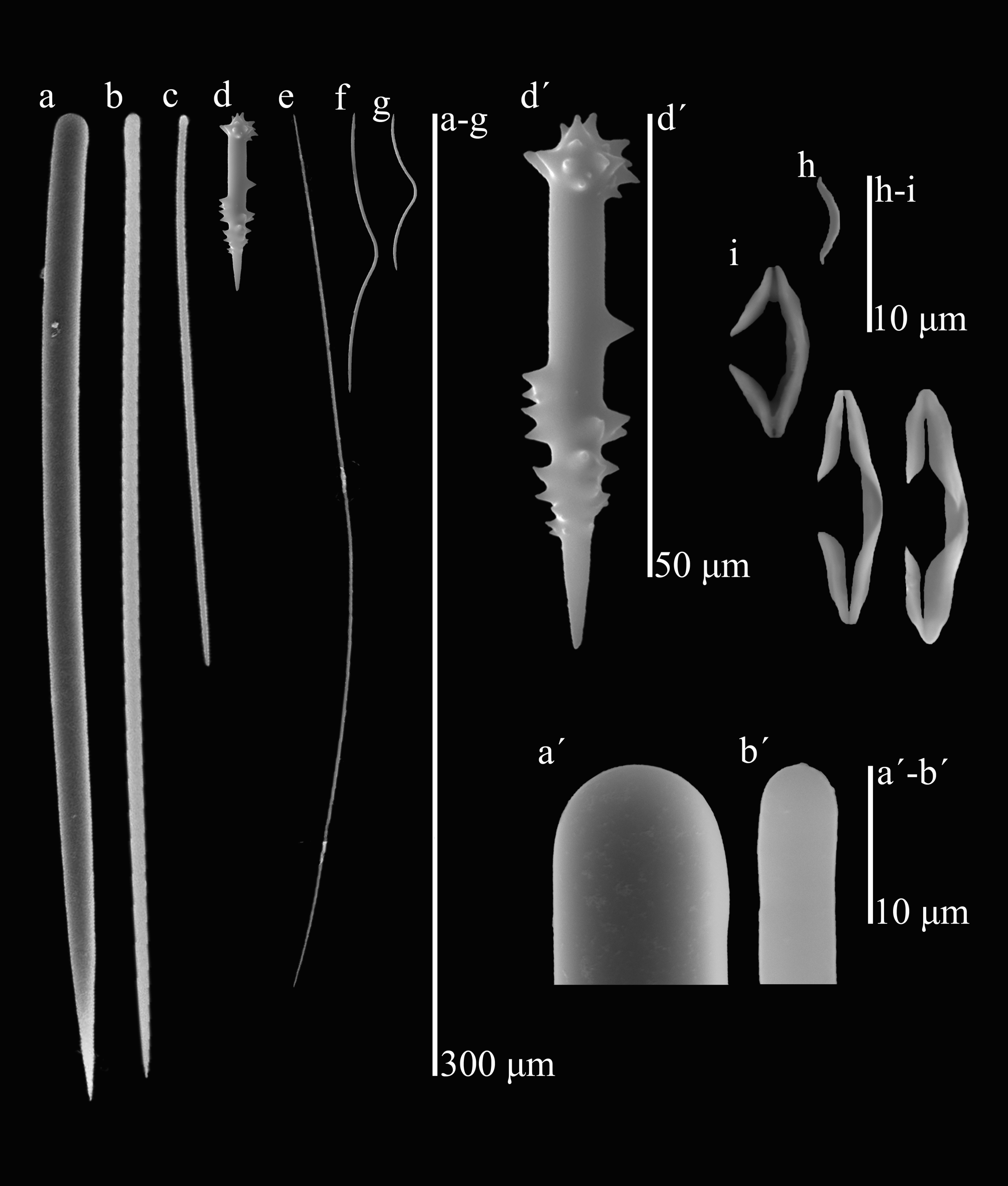 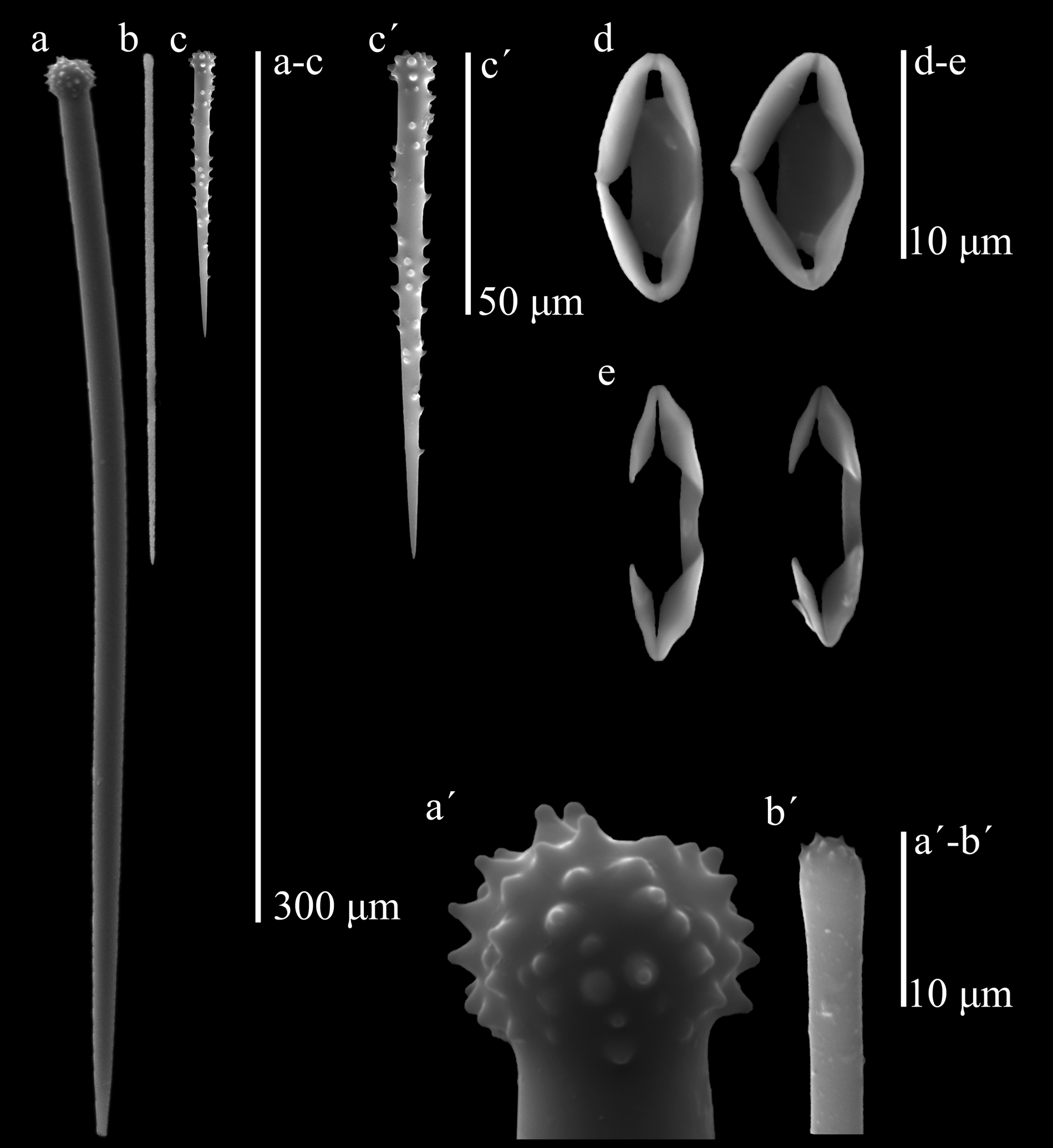