Description. Holotype ( Fig 1View FIGURE 1 A): body long cylindrical, with length/width ratio about 6.6. Cephalothorax about 1 / 5 of body length, as long as broad, with two well separated eye-lobes, carapace divided into four plates. Pereon with all pereonites shorter than broad, pereonites 2 and 4 longest, interpereonites extended; pleon about 1 / 5 of body length, pleonites 1–4 each with one plumose seta laterally; pleotelson semicircular.

Etymology. The name is derived from the Latin “ lenis ” (smooth) and “ primorum ” (incisor), implying the presence of smooth superior margin on right incisor of the species.

Distribution. It is only known from Shitiping and Jihuei, eastern Taiwan.

Remarks. Of six described species, the present species most closely resembles Aparatanais denticulatus ( Gutu & Ramos, 1995)  , recorded from Columbia, South America. Both species have the carapace divided into four plates and the lack of kukri-shaped sinuate spine on palm of chelipeds ( Table 1). Yet, they are distinguishable by several morphological characters. First, Aparatanais lenoprimorum  lacks any serration on the left mandible lacinia mobilis, in contrast to 5 serrations on that of A. denticulatus  . Second, the former species has non-crenulated right mandible incisor and four plumose setae on pleon epimerons, whereas the latter species has crenulations on right mandible incisor and four simple setae on pleon epimerons. Finally, the former species has serrated spines on the second article of the maxilliped palp, but the latter species possesses denticulated spines on the same mouth part ( Gutu & Ramos, 1995: Figs 6View FIGURE 6 A, E –F, 7 A –C; present study: Figs 1View FIGURE 1 A –B, G –H, 2 B –E, Table 1).

Bird and Bamber (2013) commented that the primary morphological character for the genus Aparatanais  is the presence of the heavy serrate spine on the maxilliped palp article 2, and other supporting characters (i.e., small maxilliped endite tubercles, a kukri-shaped cheliped palm spine, a long pereopod 1 merus, a relatively narrow pereopod 3 propodus, and short uropods) are not necessarily present simultaneously in all the taxa of the genus. On the same token, the lack of crenulations on right mandible incisor of the present species may be considered as an exemption from the generic diagnosis. 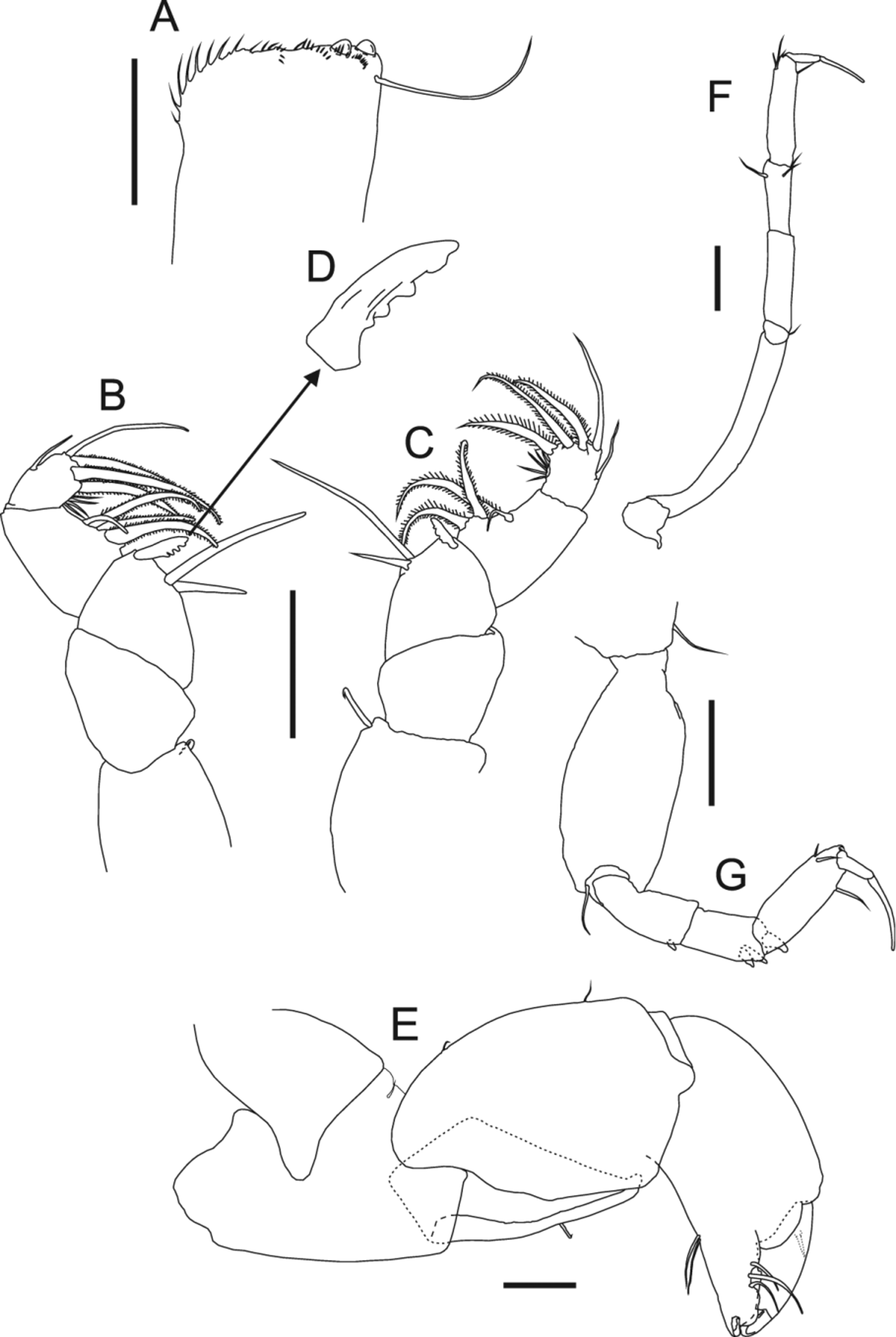