Description. Masses of small hollow lobes and tubes ( Figs 75a –cView FIGURE 75). Surface faintly roughened, not smooth. Color in situ greyish blue to light red-brown, in alcohol both samples are red-brown. Size of whole mass up to 6 x 8 cm, individual tubes and lobes up to 1.5 cm high 1 cm in diameter or smaller. Oscules are frequently absent from the top of the hollow lobes, as they may be at the sides or in the interstices, and are not common. They do not have observable collars or fringe and have a diameter up to 0.5 cm.

Remarks. We follow Lévi (1965) in assigning the specimens to Haeckel’s S. stauridia  , although his figure and description shows some discrepancies: Haeckel’s specimen apparently was much smaller and he provided a stylized drawing which shows a single central tube with a ring of side tubes. He did not mention the presence of diactines. However, they are not very common in our specimens, so he may have overlooked them. He did not

There are competing names, which are potential junior synonyms of this species. Mauritian Sycortis sycilloides Schuffner, 1877  (p. 420, pl. 25 fig. 10) has similar habitus (two coalescent small tubular individuals), but it has the unpaired actines of the subatrial triactines much longer and thicker (600–1000 x 80 µm) against Haeckel’s and ours only 400 x 10–20 µm. Red Sea Grantessa glabra Row, 1909  (p. 203, pl. 19 figs 5–6, text fig. 4a) is a small tube with side oscule and it has cortical and atrial triactines much larger (400–700 µm) and diactines and pseudosagittal triactines much thicker (50–90 µm) than Haeckel’s and the present material. If these measurements would prove to be inaccurate or much more variable than so far determined, these names could be synonyms. Redescription is necessary. Burton (1959) reported Grantessa glabra  from the South Arabian region and Grantessa sycilloides  from the Gulf of Aden, but he did not provide a description of his material. He commented that the two species, glabra  and sycilloides  , are probably synonymous.

We obtained a 28S partial sequence of one of our specimens ( ZMA Por. 13664). This ended up in the same clade but rather far away from the group comprised by Sycettusa  hastifera-S. simplex-S. hirsitussima  sp.nov. (cf. Fig.3View FIGURE 3). As mentioned above in the Remarks of S. simplex  , a trimmed alignment with a length of 403 showed 20 sites or more difference with S. hastifera  , S. hirsutissima  and S. simplex  . FIGURE 3. Maximum-likelihood tree based on analysis of sequences of the partial 28S gene (C2–D2 region, comprising 461 sites) of Western Indian Ocean Calcaronea newly generated by the Naturalis Biodiversity Center and sequences additionally obtained from GenBank, the Sponge Barcode Project and from Oliver Voigt (München) from the Red Sea, Indonesia, Australia, and a few sequences from other parts of the world, to demonstrate the affiliation of the compared species. Numbers at the root of clades are bootstrap values of 1000 replicates. 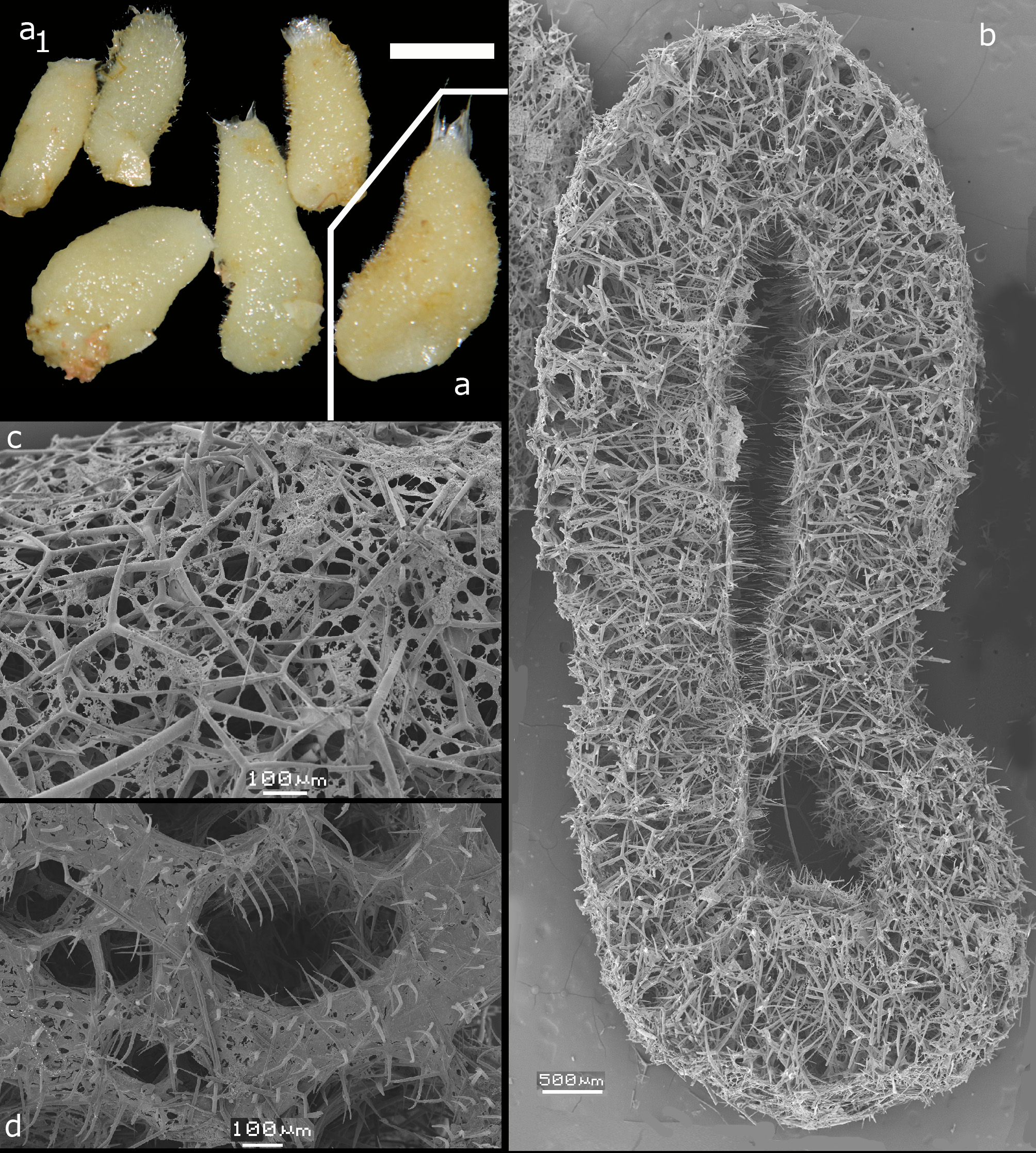