Diagnosis. Litoria pinocchio sp. nov can be diagnosed from all other Litoria by the following combination of characters: long (up to at least 2.5 mm), erectile, rostral spike in males that is circular in cross section; relatively small size (SVL 29.2 mm); moderately slender build (HW/SVL 0.26); tibia less than half length of body (SVL/TL 0.48); large eyes (EYE/SVL 0.12); moderately small tympanum (TYM/SVL 0.055); small, rounded, green tubercles present on lateral surfaces of torso but not extending across mid-dorsum; light-brown dorsal colouration with distinct green transverse bands and relatively little dark-brown flecking and spotting; and orange colouration in concealed areas of thighs and axilla.

Fingers with relative lengths III>IV>II>I; fleshy, opaque webbing between all digits, forming a narrow basal strip between I and II, extending to disc on distal edge of II and proximal edge of IV, and to penultimate phalanx on both sides on III. Terminal discs expanded, wider than toe discs and with distinct circum-marginal grooves. Nuptial pads brown, roughly tear-shaped with point of tear oriented in posteroventral direction. Indistinct, unpigmented, bifid subarticular tubercle present at base of penultimate phalanx on all fingers, series of further indistinct unpigmented subarticular tubercles present on finger IV, indistinct proximal metacarpal tubercle at base of I, and a pair of smaller distal metacarpal tubercles at base of both III and IV.

Appearance in life. The following description is based on photographs of the holotype taken at night and during the day ( Fig. 5 View FIGURE 5 A–E). Ground color of dorsal and lateral surfaces medium brown, with extensive vermiculations of darker brown along lateral surfaces. Three prominent, green transverse dorsal bands or blotches, one thin band between anterior edge of eyes, and two much wider and more indistinct bands extending across shoulders and posterior half of abdomen respectively. Further bright-green lateral flecks and blotches along lips, orbit, elbow and hindlimbs. Rostral spike predominately green, with brown flecks and an unpigmented tip. Broken yellowish-white labial stripe extending from tip of snout below eye to axilla. Iris with indistinctly edged outer ring of golden-brown with dark brown flecks, medial ring of dark brown with golden flecks, and narrow golden-brown inner ring around the pupil. Concealed surfaces of fore and hindlimbs orange ( Fig. 5E View FIGURE 5 ). Venter predominately offwhite, heavily flecked with brown around the edges of the lower jaw.

Comparisons with other species. The combination of small adult size (<35 mm), slender build and a rostral spike distinguishes L. pinocchio sp. nov. from all but four other Melanesian Litoria . Of these four taxa L. pinocchio sp. nov. can be distinguished from L. mareku by its larger size (male SVL 29.2 mm vs 25.5–26.5 mm), long erectile rostral spike in males (vs effectively a short stub that is wider than long), and light to medium brown base colouration on dorsum (vs at least some regions of very dark chocolate brown); from L. havina by its mixed green and brown dorsal colouration (vs uniform green or brown) and orange groin colouration (vs red); and from L. mucro (found at lower elevation in the Fojas) by its proportionally shorter legs (TL/SVL = 0.48 vs 0.51–0.56), larger eyes (EYE/SVL = 0.12 vs 0.097–0.11), and more complex dorsal pattern with three prominent green bands (vs predominantly brown or olive-green with at most a small amount of light-green flecking). Males of L. havina and L. mucro also have shorter rostral spikes than L. pinocchio sp. nov. (RL <2.0 mm vs>2.0 mm).

Litoria pinocchio sp. nov. is most similar in size and appearance to L. pronimia from the southern slopes of the Central Cordillera. We compared the single specimen of L. pinocchio sp. nov. with L. pronimia specimens from populations scattered widely across much of its known range. It differs by its shorter limbs (TL/SVL 0.48 vs 0.49– 0.52), wider tympanum (TYM/SVL 0.055 vs 0.042–0.053), and light green tubercles in life prominent on lateral regions of mid-torso but not extending across the dorsum (vs extending across the dorsum at mid-torso). Litoria pinocchio sp. nov. further has a tendency towards a more robust build than L. pronimia (HW/SVL 0.26 vs 0.23– 0.26, with only one specimen out of 23 L. pronimia having the maximum ratio of 0.26). The preserved holotype of L. pinocchio sp. nov. also has a more clearly defined dorsal pattern of blue (green in life) blotches on a light brownish background (see Fig. 4 View FIGURE 4 ) (vs densely ‘peppered’ with varying shades of brown and blue, and with transverse green regions tending to be less clearly defined (see Fig. 2 View FIGURE 2 )). Comparison of colour patterns in life based on a series of photographs of both species also suggests some further differences, with the holotype of L. pinocchio sp. nov. having a broken off-white labial stripe extending from the tympanum and across the front of the snout ( Fig. 5 View FIGURE 5 B–D) (vs absent, or on lateral regions of head only) and no visible off-white tubercles along the outer edge of the lower arms and legs (vs usually apparent).

Etymology. In reference to Carlo Collodi’s fictional character Pinocchio, who had a nose that became longer when under stress or lying.

Range. Litoria pinocchio sp. nov. is known only from a single site on the southern slopes of the Foja Mountains in northern Papua Province, Indonesian New Guinea ( Fig. 3 View FIGURE 3 ). Despite extensive searching over six nights at the same site, and during nearly 6 weeks of surveys across two trips at sites higher (~ 1500 m a.s.l) and lower (~ 700 m a.s.l) than the type locality in the Foja Mountains, we failed to capture further individuals. Litoria pinocchio sp. nov. was also not detected during surveys of the nearby Mamberamo Basin, and locals from the villages of Kwerba and Papasina in foothill forests around the Foja Mountains were unfamiliar with this species, suggesting it does not occur at these lower elevations.

Conservation status. Litoria pinocchio sp. nov. occurs in a region retaining large areas of undisturbed forest with very low human population density. However given that it is known only from a single specimen and information on its distribution and habitat requirements are lacking, we recommend that it be classified as Data Deficient by the IUCN.

Remarks. The holotype was found on the ground in heavy rain in the late afternoon. When collected, the spike was oriented at 180 degrees to the line of the body ( Fig. 5D View FIGURE 5 ). Subsequent to capture, the spike became less rigid and ‘drooped’ ( Fig. 5A View FIGURE 5 ). A similar transition has been reported and photographed in L. mucro and L. pronimia ( Günther 2014; Menzies & Johnston 2015). No females of L. pinocchio sp. nov. are known; however, based on its close similarity to L. pronimia and other small spike-nosed Litoria , we hypothesize that only males have a spike.

Another small Litoria with a rostral spike was observed at higher elevations in the Foja Mountains on a previous expedition in 2005 at the ‘Bog Camp’ site (~ 1600 m a.s.l.; 2.57°S, 138.72°E). This specimens was calling in an inaccessible position on a leaf in the lower canopy, and we are unable to confirm that it was L. pinocchio sp. nov. 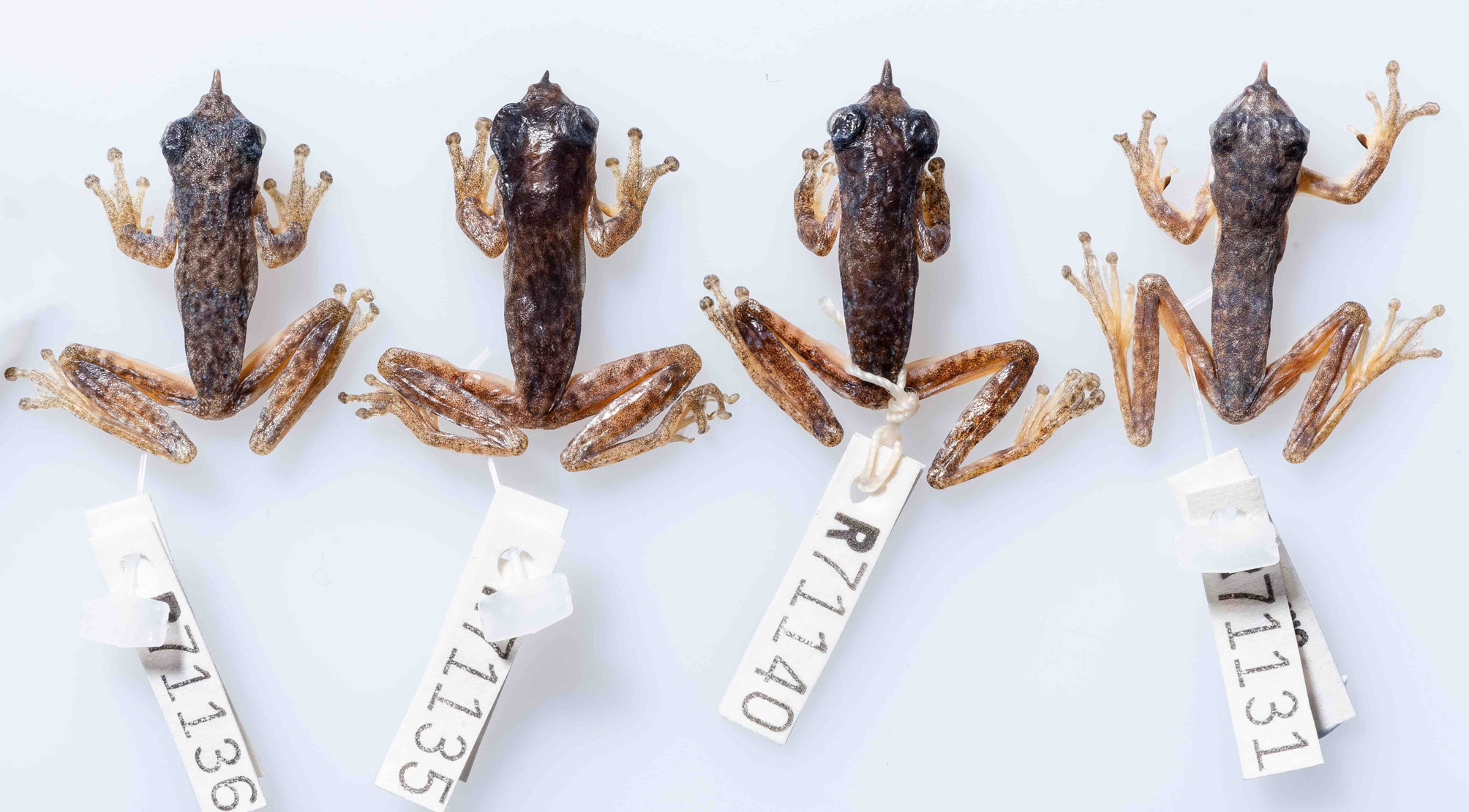 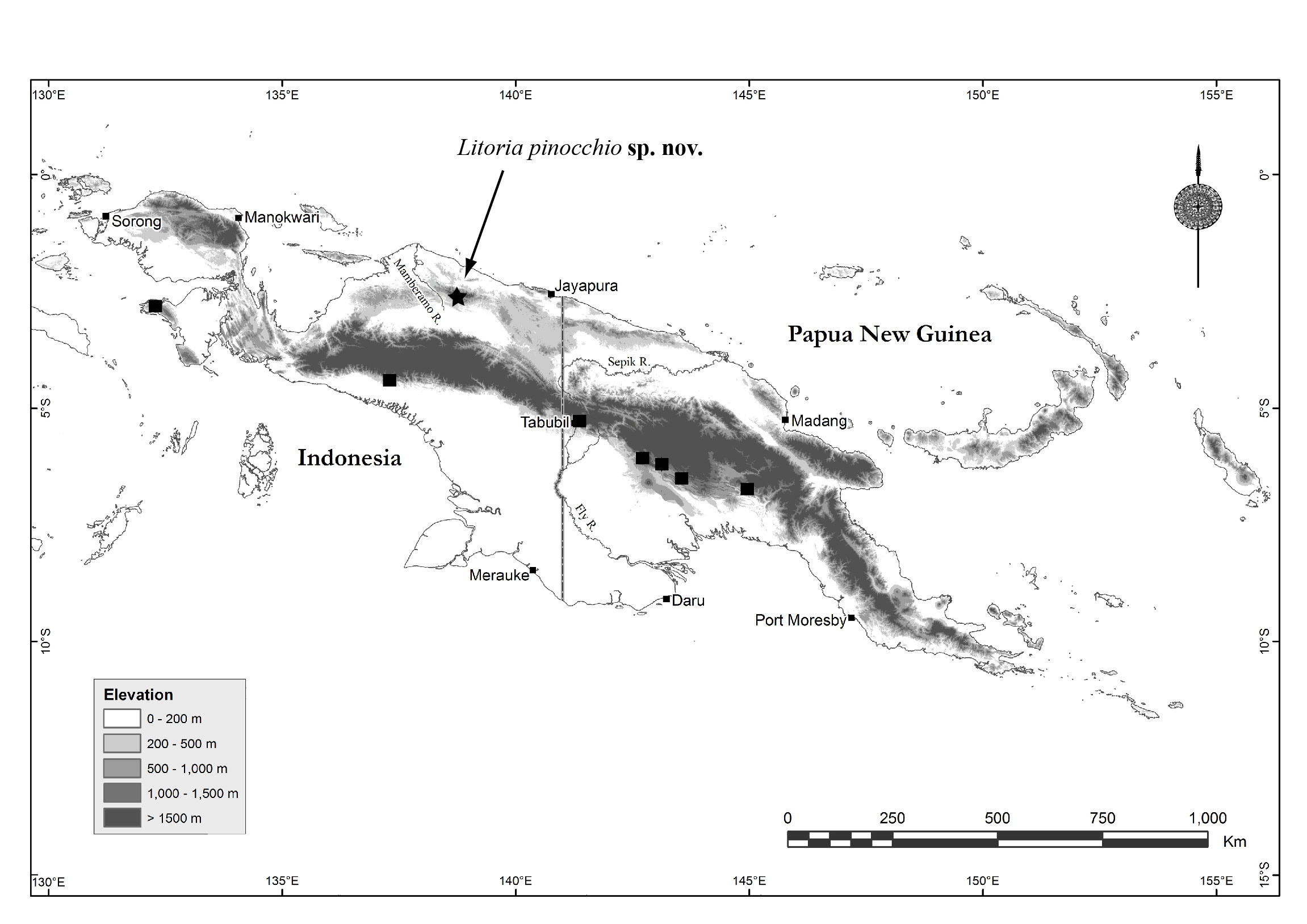 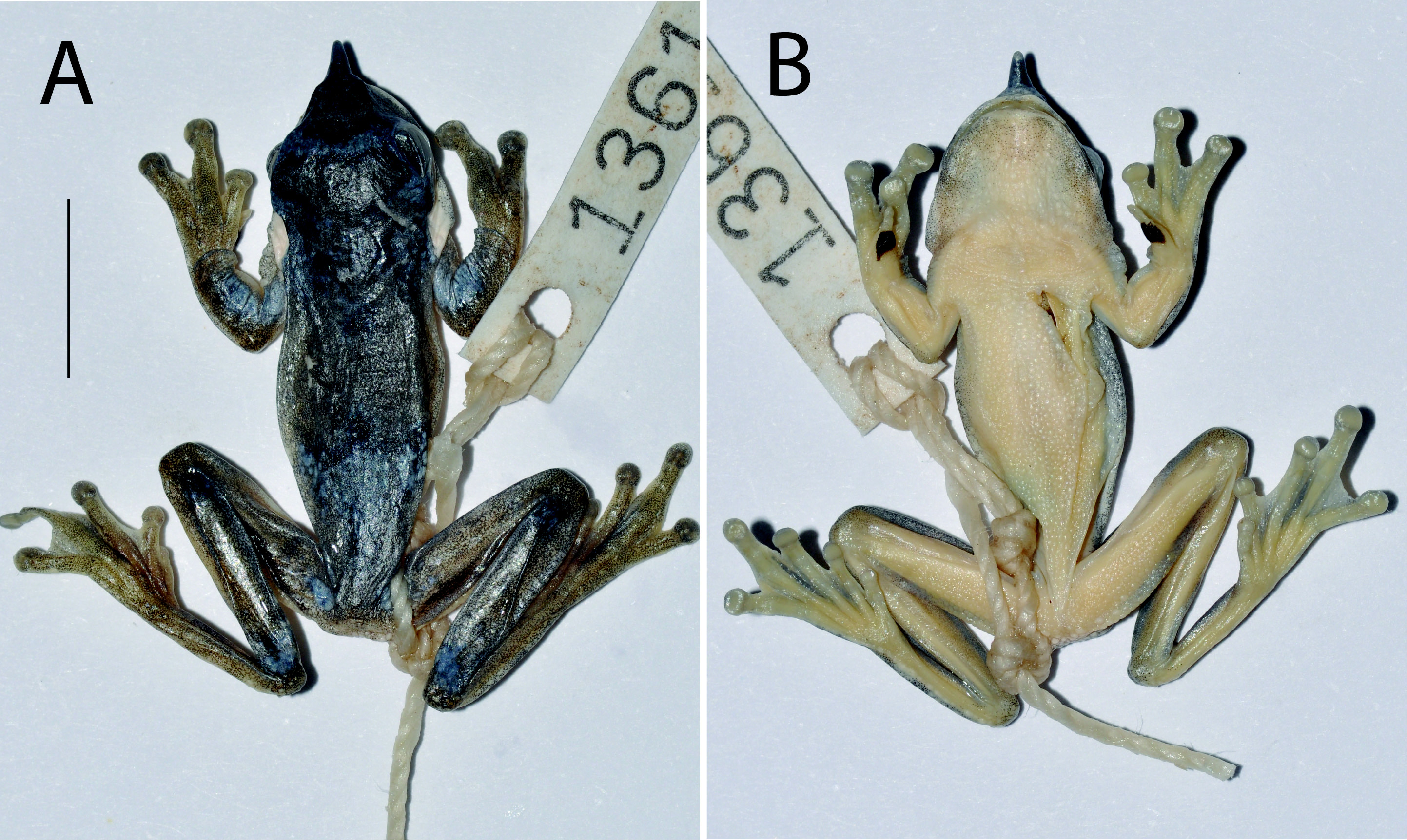 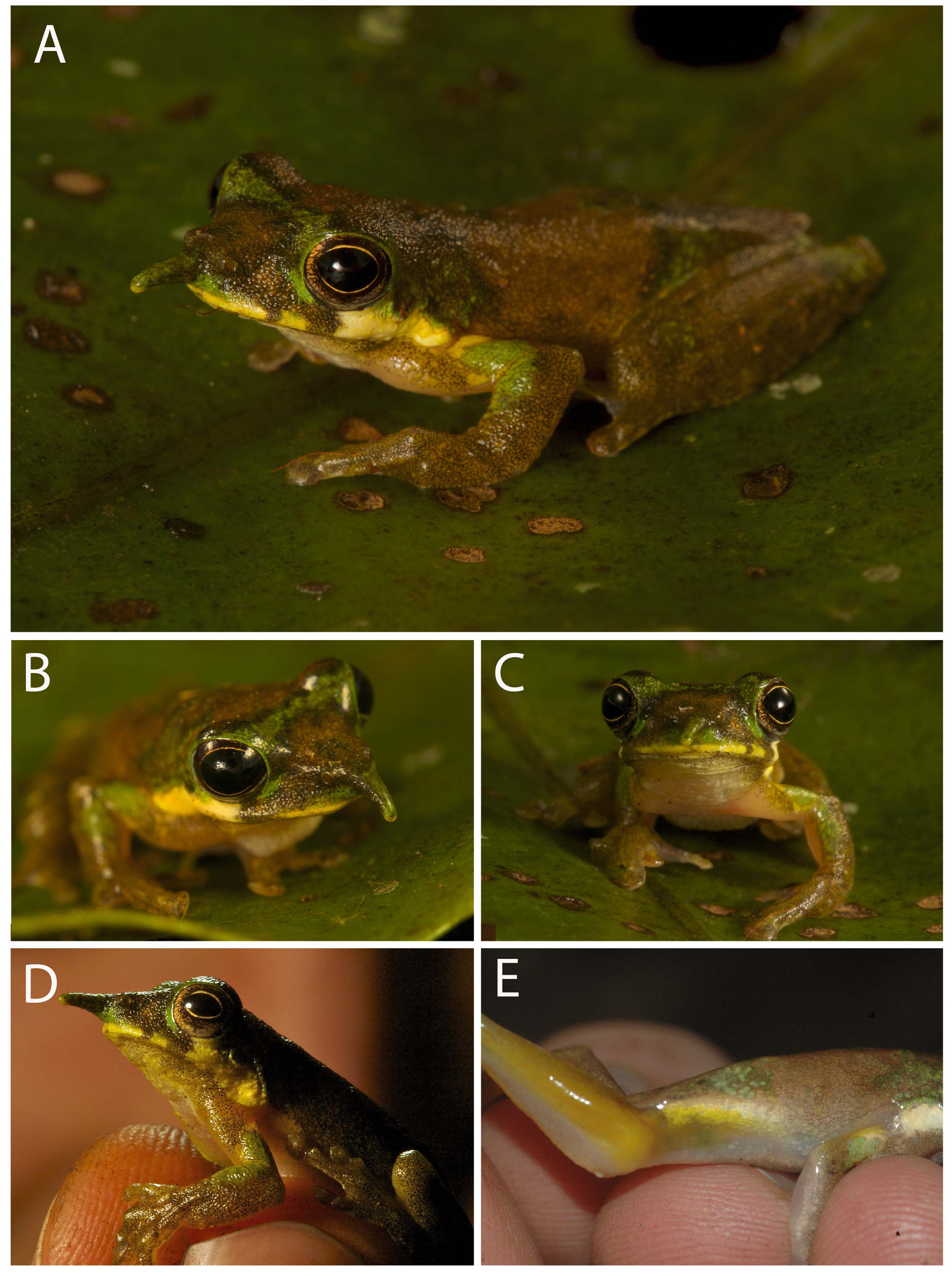 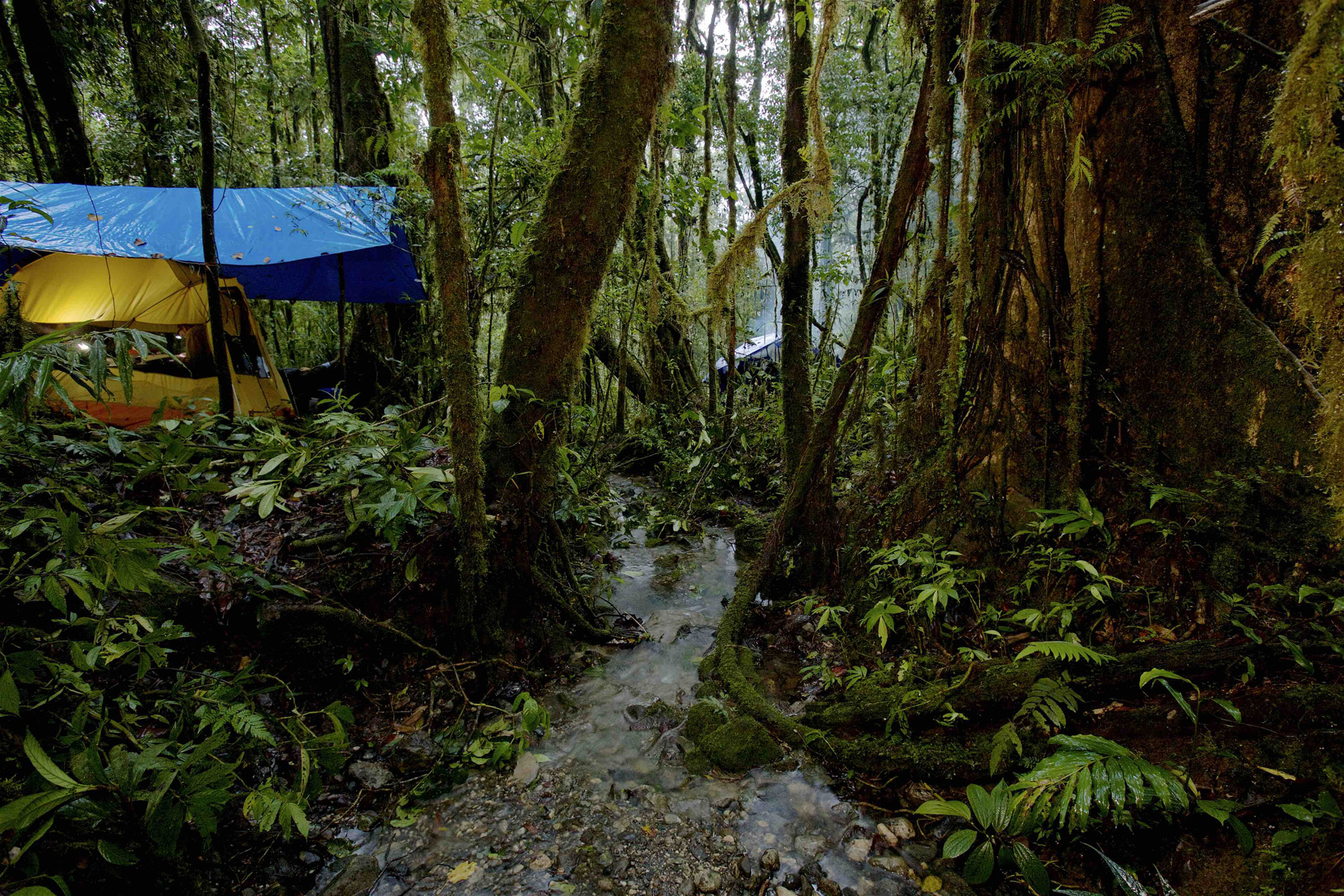