In Cloeodes   patella-tibial suture retains usual shape, being not shifted distally ( Fig. 16 View FIGURES 13 – 17 ), and is equally developed on all legs on larva ( Figs 21–23 View FIGURES 18 – 25 , 60–62 View FIGURES 58 – 62 , 102 View FIGURES 98 – 103 ) and on all legs of female subimago and imago; it is absent only on fore legs of male subimago and imago. These features are initial for Anteropatellata and different from Centroptella   and Chopralla   , whose patella-tibial suture on larval middle and hind legs is greatly shifted distally, and on fore legs is absent in all stages.

Proximal arched row of fine setae is developed on larval tibia in some other taxa, being a plesiomorphy ( Salles et al. 2016); it can be poorly expressed (e.g., in Indocloeon   — Kluge 2012a: Fig. 15 View FIGURES 13 – 17 ), or dense and regular, but with spaces between setae sockets and stretched distally up to beginning of the patella-tibial suture (e.g., in Cloeoninae—Kluge & Novikova 1992: Figs 1–2). In Centroptella   and Chopralla   it is also regular and spaced, being greatly elongated.

(2) On larval abdominal sternum, transverse row of fine setae is very regular, with setal sockets contiguous ( Fig. 20 View FIGURES 18 – 25 : Waltz & McCafferty 1987a: Fig. 5; 1987b: Fig. 44 View FIGURES 37 – 57 ; Salles et al. 2015: 10E–F). Setae of these rows are long and simple (not furcate). Pair of these setal rows is present on each of abdominal sterna II–VI ( Salles et al. 2016). On sternum II these rows can be either well-developed, or vestigial, consisting of few (3–2) setae, which sometimes are situated not close together. Waltz & McCafferty (1987a) wrote about incus [ Bernerius   ], that its sterna have «long, fine setae randomly scattered over surface, without tufts of setae», that was a reason for placing it to a separate genus Bernerius Waltz & McCafferty 1987a   .

Transverse rows of long setae on the same places of abdominal sterna are present also in Centroptella   and Chopralla   , but their setal sockets are separated, and all setae are bifurcate. Presence of such spaced rows of bifurcate setae is not a reliable apomorphy, because the same rows are present in some non-related taxa, for example in selected Oriental species of Procloeon Bengtsson 1915   ( Salles et al. 2016 and own observation). Unlike this, rows of non-bifurcate setae with contiguous sockets is not found in taxa other than Cloeodes   .

Setae forming transverse rows on sterna, are very delicate and colorless; under light microscope, their structure is well visible only if prepare a dry slide of empty cuticle (molting exuviae can be used for this purpose). FIGURES 13 – 17. Cloeodes vibratorius sp. n. 13, labial palp; 14, labium (left half in ventral view with muscles shown by interrupted lines; right half in dorsal view); 15, paraprocts; 16, tibia of fore leg, anterior view (seta and suture on opposite side shown by interrupted lines; only two setae of proximal arched row are shown); 17, tarsus of hind leg, view from outer side (13, holotype). 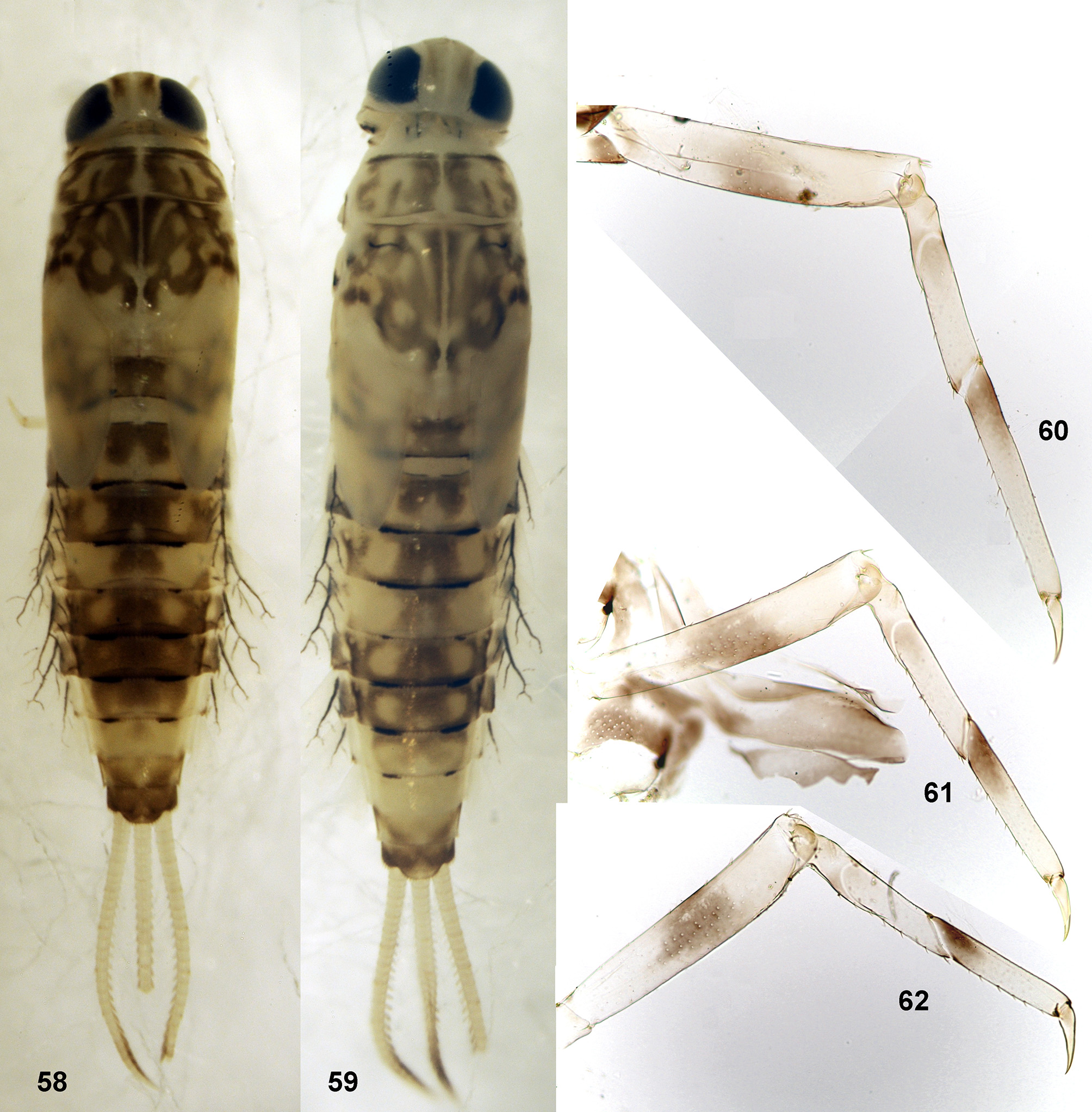 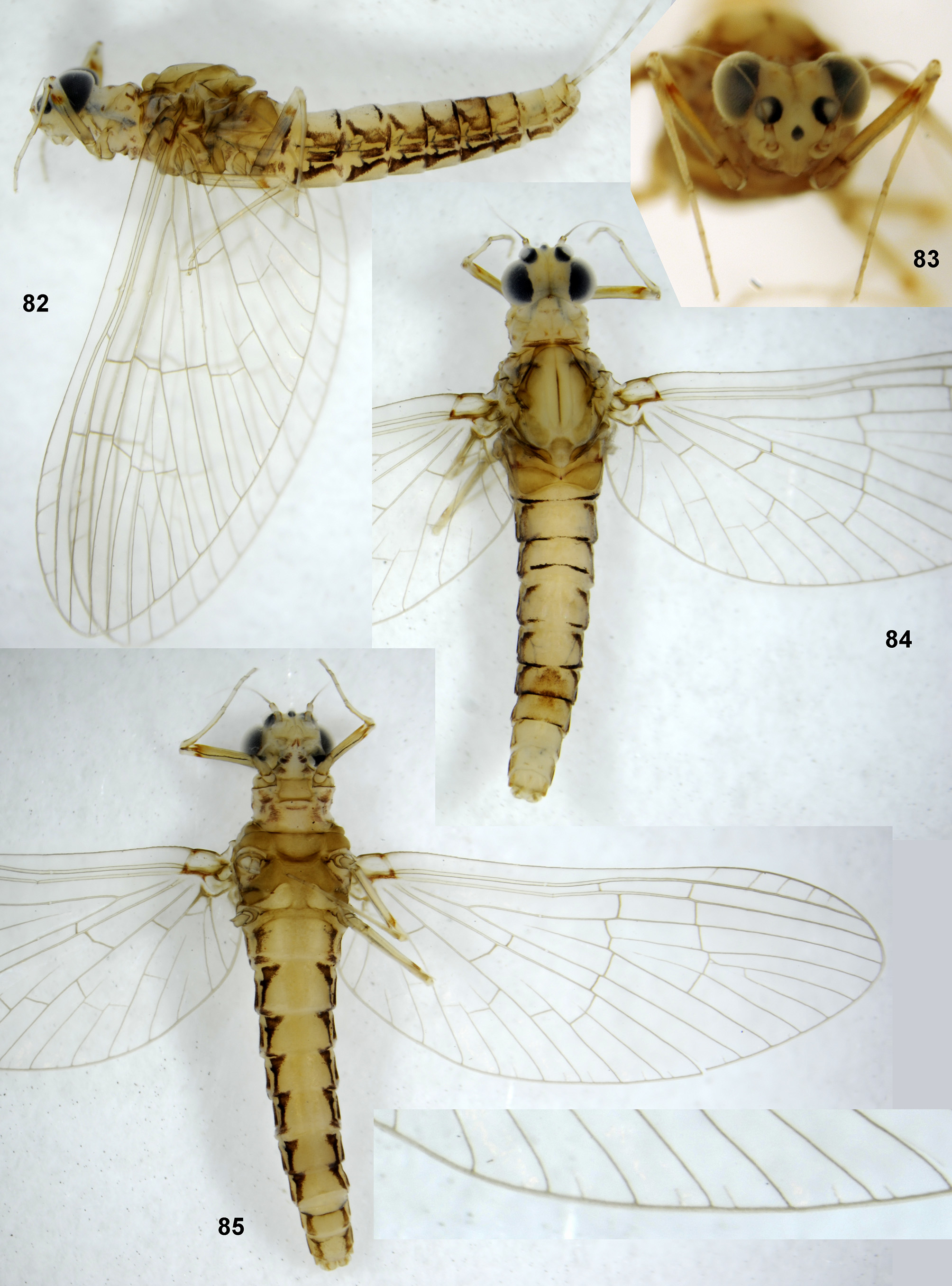 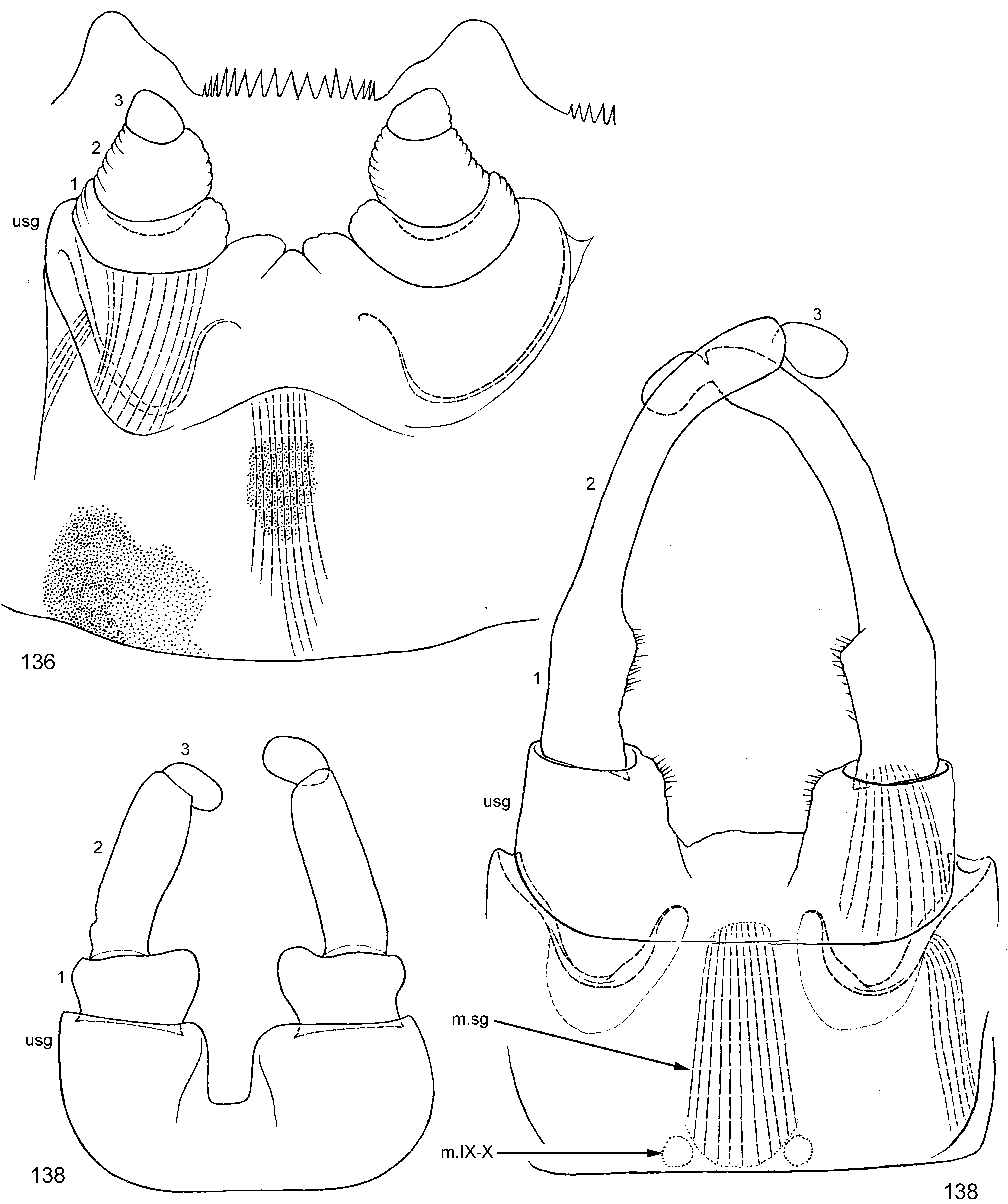 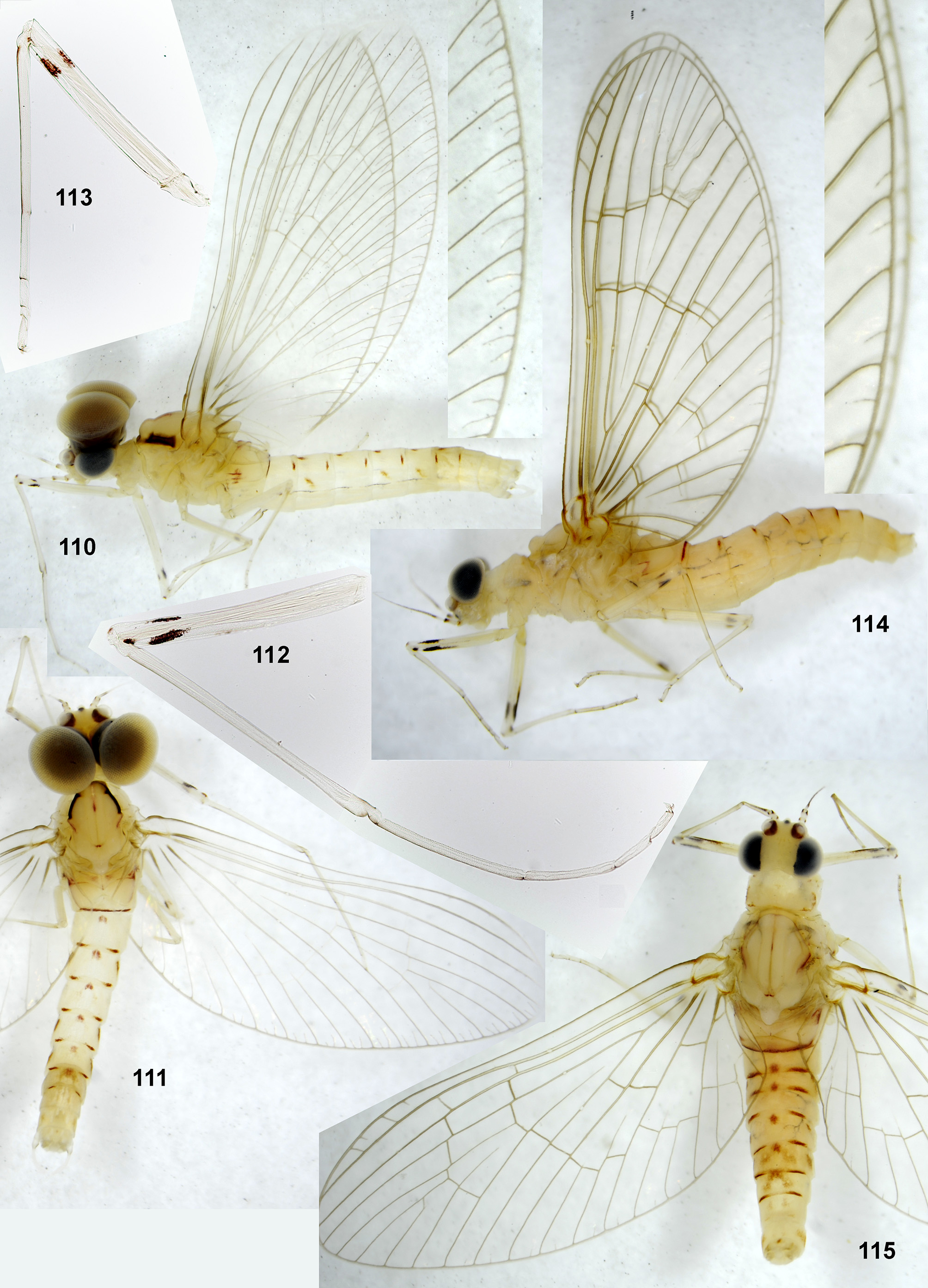