Tenthredo atra has already been associated by various authors with larval hosts in many higher plant taxa. Taeger et al. (1998), in a summary of these records, mentioned the families Brassicaceae, Caprifoliaceae, Lamiaceae, Plantaginaceae, and Solanaceae. There are also records of larvae of T. atra feeding on Asteraceae ( Pschorn-Walcher and Altenhofer 2006), Betulaceae and Salicaceae ( Loth 1913), Ranunculaceae ( Conde 1934), Rosaceae ( Kangas 1985), and Urticaceae ( Pschorn-Walcher and Altenhofer 2000). It is not clear whether records from Menyanthes trifoliata ( Menyanthaceae) and Sedum telephium ( Crassulaceae), which are sometimes named as hosts of T. atra (e.g. Taeger et al. 1998), really refer to this species, or respectively to the closely related T. moniliata Klug, 1817 and T. ignobilis Klug, 1817. Taeger et al. (1998) mentioned some additional plant taxa on which oviposition by T. atra has been observed but which have not been proved to be hosts of the larvae. Our identification of the larvae from Gentiana as T. atra accepts the premise that the name refers to only one, highly polyphagous species. However, a wide morphological variability, most obvious in the colour pattern of T. atra imagines, might indicate that more than one species are currently grouped under this name.

The larvae from Gentiana asclepiadea (Figs 1 View Figures 1, 2 , 2 View Figures 1, 2 ) are in general appearance not distinguishable from larvae of T. atra from other hosts, nor from the larvae of the related T. moniliata on Menyanthes trifoliata ( Conde 1934; Liston personal observations). Lorenz and Kraus (1957) did not examine larvae of T. atra , and their description is based on those of Cameron (1882) and Carpentier (1888). Lorenz and Kraus (1957) did not mention the faint, oblique, darker dorso-lateral stripes shared by the larvae from Gentiana , the larva described by Cameron (1882; as T. dispar Klug, 1817 from Succisa pratensis ), and larvae of T. moniliata examined by Liston. Note also that Carpentier’s (1888) description, as T. dispar , is of larvae from Menyanthes trifoliata , and may therefore refer to T. moniliata , but he did not mention any body markings. On the other hand, the larva of Tenthredo ignobilis , another species in the complex with T. atra , possibly differs from T. atra in lacking the oblique body markings ( Liston 2015: fig. 9).

Larvae of the later instars feed mainly on the leaves; they feed from the edge, leaving irregular holes. Inflorescences are also sometimes consumed, at least under rearing conditions (Fig. 2 View Figures 1, 2 ). The largest full-grown larvae are similar in size to those of T. propinqua , i.e. somewhat over 20 mm long. 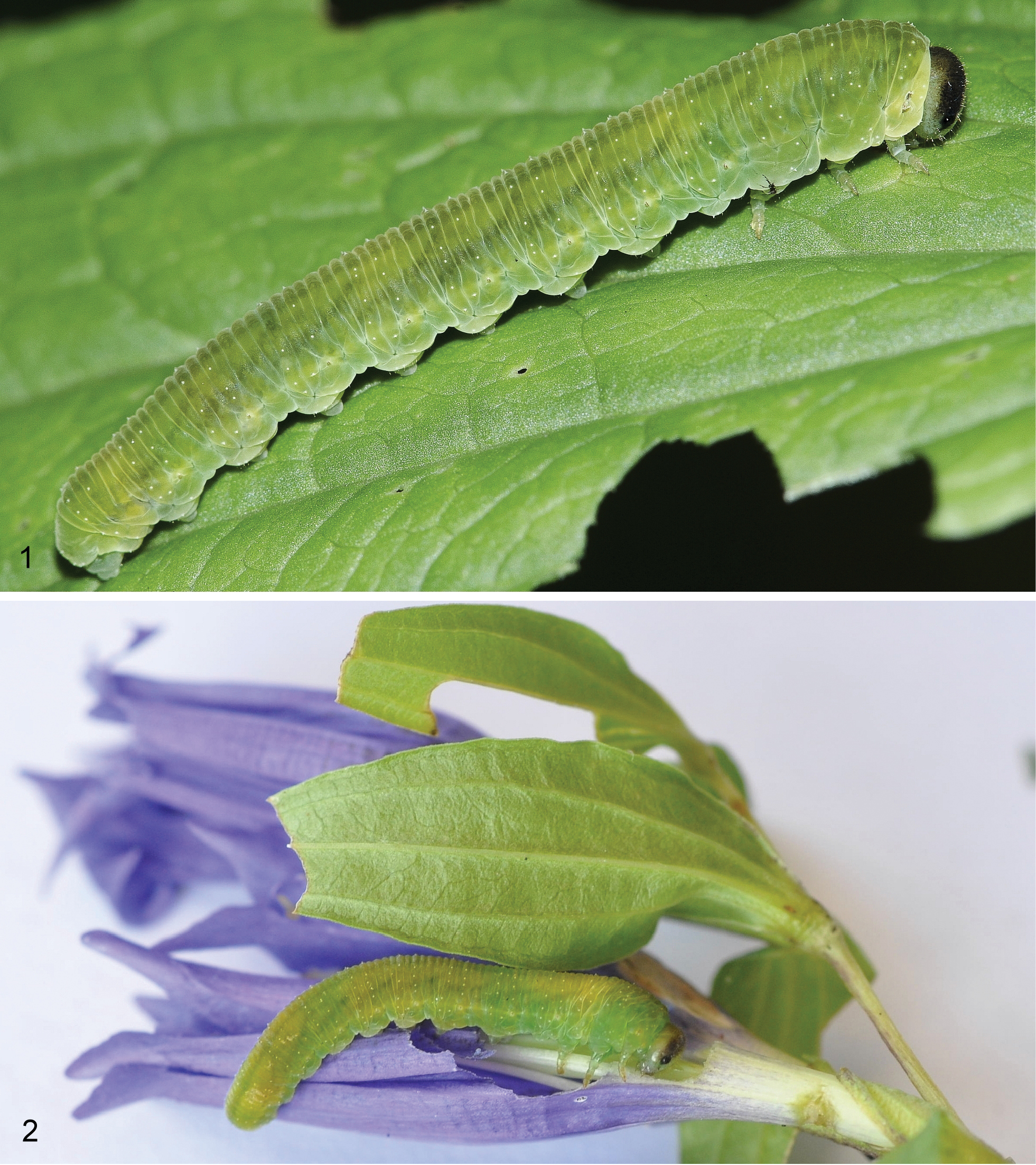