Remarks. Stål (1862) described Repipta subinermis , which he later transferred to Castolus ( Stål 1872) . He based his description on females from Mexico and deposited them at the NHRS and NHMW. We are here designating a lectotype for Repipta subinermis , selecting the syntype deposited at NHMW that fits the length indicated by Stål (1862) and which was figured by Champion (1899, his fig. 6, Tab 17) ( Sehnal 2000), thus following Recommendation 74B of the ICZN (1999). Maldonado (1976) in his synopsis of Castolus stated not having examined specimens of C. subinermis , but nonetheless included this species in his identification key. Brailovsky (1982) provided additional distributional data for species of Castolus including C. subinermis . Maldonado and Brailovsky (1992) later described as new C. annulatus , based on some of those “ C. subinermis ” specimens, indicating that Brailovsky’s (1982) identification of C. subinermis was in error and that they belonged to a new species. Maldonado and Brailovsky (1992) did not provide comparative notes on how to separate these two species. Studying photos of the lectotype and paralectotype of C. subinermis ( Figs. 8A, B View FIGURE 8 ), and the holotype of C. annulatus ( Fig. 7A View FIGURE 7 ), show that both are similar in having rather short humeral angles, and a similar head, pronotal, hemelytral, and ventral abdominal coloration patterns. Given that Maldonado (1976) never stated having examined the syntype series of C. subinermis , he probably had an erroneous concept for this species, and thus the confusion about the identity of C. subinermis (e.g., Maldonado & Brailovsky 1992). Therefore, we formally synonymize C. annulatus under C. subinermis .

Elkins (1962) described Mucrolicter to accommodate the new species M. alienus , and stated that this genus is related to, but different from, Castolus due to its trifid median process of the pygophore. Maldonado (1976) showed that males of Castolus species have a patch of hairs next to the median process of the pygophore, sometimes on raised tubercles giving the impression of a trifid posterior margin on the pygophore (e.g., C. nigriventris [as C. bicolor ], C. spissicornis , C. plagiaticollis ). Nevertheless, the situation is more complex because some species of Castolus apparently exhibit tumescent areas adjacent to the median process (e.g., C. pallidus ), being an intermediate between a non-raised area (e.g., C. lineatus ) ( Maldonado 1976; Swanson & Chordas 2018) and a fully protruding one as the one exhibited by Mucrolicter ( Elkins 1962) . Even when the holotype of M. alienus ( Fig. 7B View FIGURE 7 ) has some minor color differences when compared to the lectotype of C. subinermis , for instance the smaller dark area on the posterior lobe of the pronotum and the darker apex of the femora ( Fig. 8A View FIGURE 8 ), the structure of male pygophore ( Fig. 7B View FIGURE 7 ) is identical to the drawing presented by Maldonado & Brailovsky (1992), in which their holotype ( C. annulatus ) has a color pattern extremely similar to that of the lectotype of C. subinermis . Therefore, because Mucrolicter is monotypic, and given the evidence presented, we here propose the formal synonymy of Mucrolicter under Castolus . 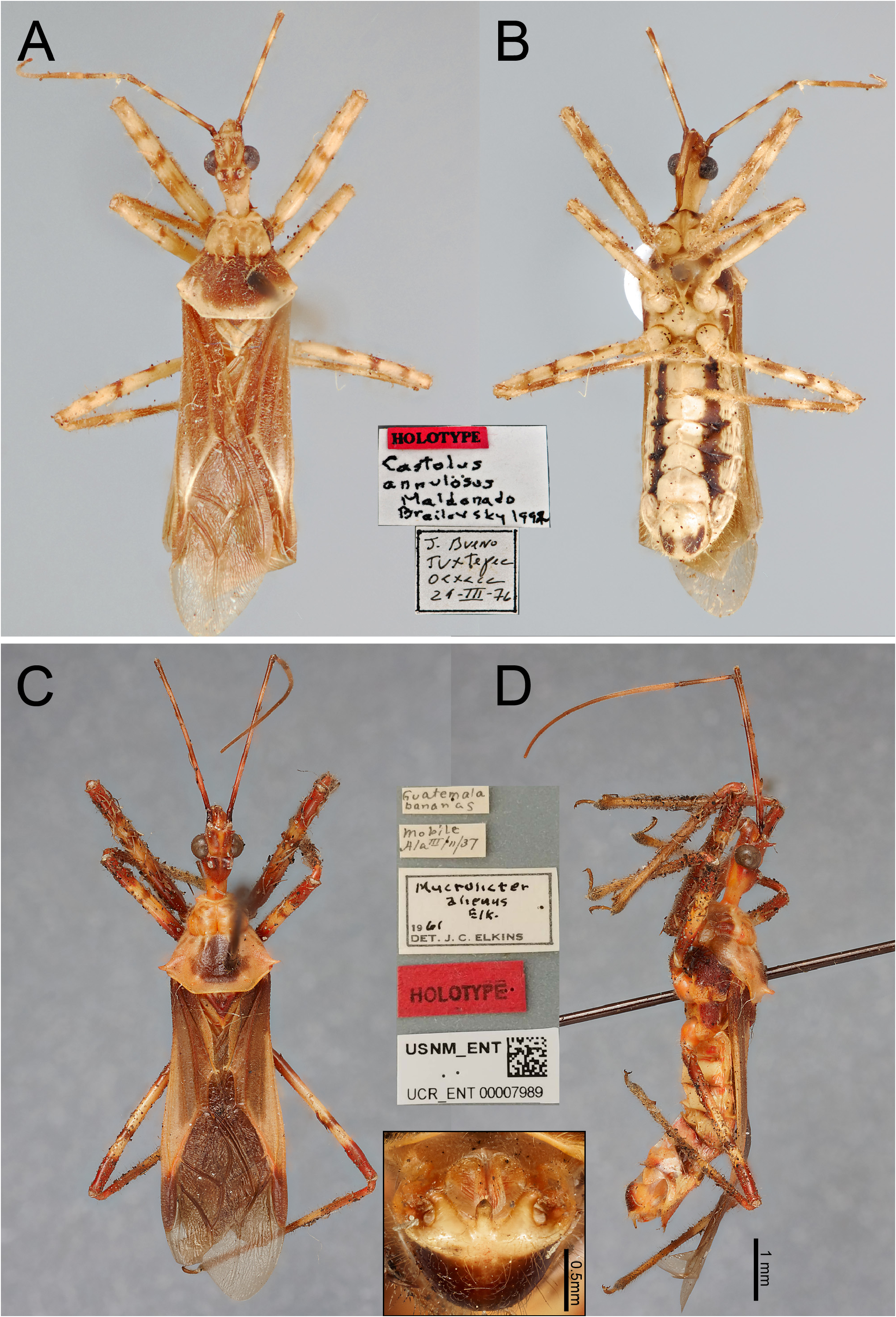 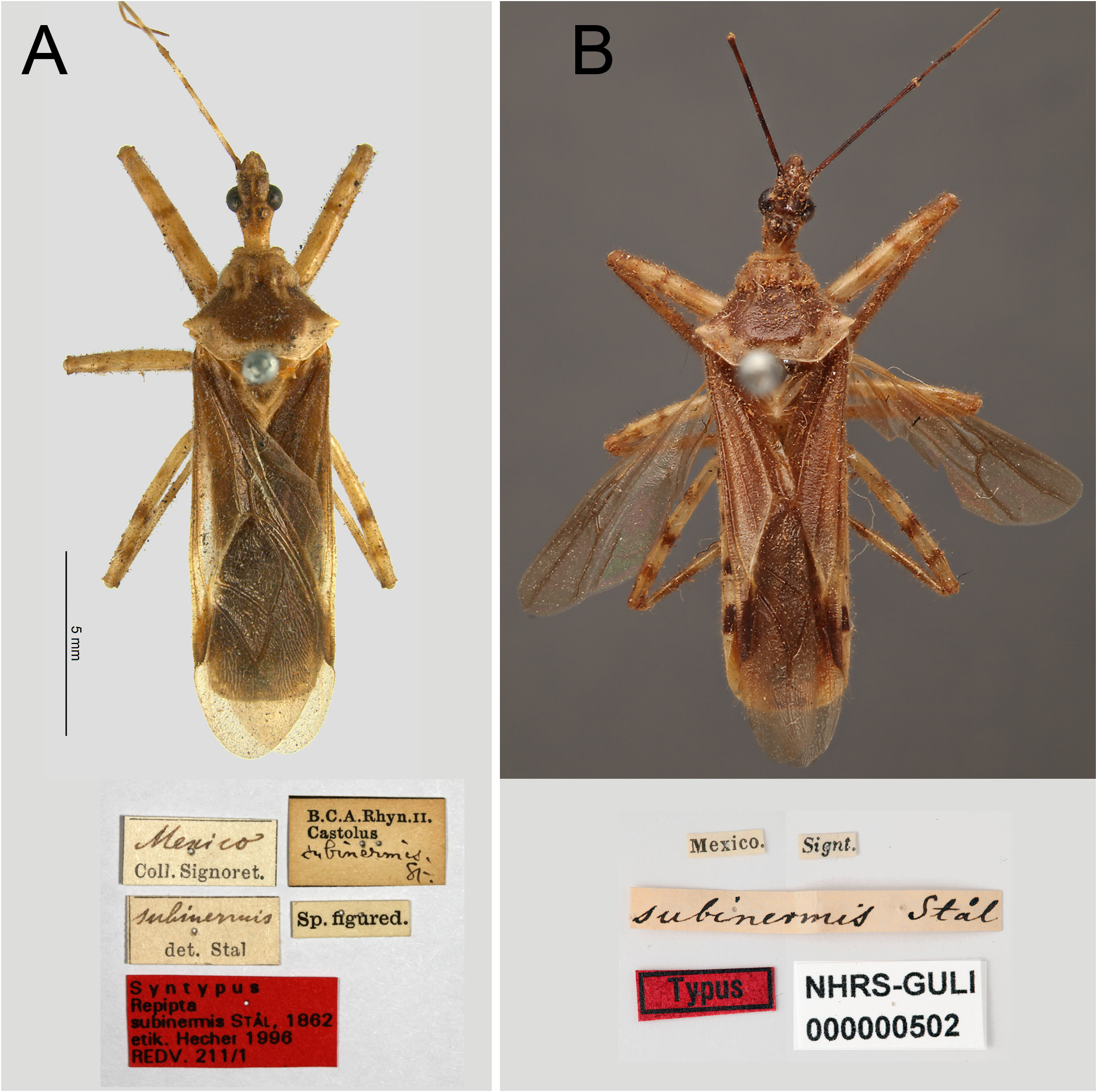