Gonothecae (♂) few, attached to internode or directly below base of hydrotheca; large, up to three-times longer than hydrothecae, spindle-shaped, widest medially, longer than wide, flexed or bent mid-axis. Gonothecal body strongly annulated throughout; 10–12 complete, well-developed annulations. Neck short or barely discernible, four low rounded cusps around gonothecal aperture. Occasionally, one of the four cusps may be more developed than other three.

Differential diagnosis. The records from the west coast of North America ( Torrey 1902; Fraser 1937) seem to be morphologically distinct from descriptions of S. fusiformis  elsewhere as shown by the absence of four intrathecal cusps and the presence of two annulations at the base of the internodes. These descriptions correspond to the specimens examined by the author in this study. Given the variability of the species included in the S. fusiformis  / S.ellisii  complex, this species was most likely misidentified as S. fusiformis  . Measurements of the internodes, hydrothecae, and gonothecae ( Table 4) show that these specimens are much larger than S. fusiformis  . The intrathecal cusps are never as well-developed as in S. fusiformis  . Moreover, the hydrothecae of Sertularella pacifica  sp. nov. lack the considerably swollen basal portion and strongly tapered upper portion characteristic of the fusiform hydrothecal shape, and the gonothecae are distinct from those belonging to S. fusiformis  in being spindle-shaped and bent around their mid-axis.

Remarks. This material agrees with the hydroids attributed to Sertularella fusiformis ( Hincks, 1861)  from the west coast of North America by Torrey (1902), and subsequently included in reports by Fraser (1911, 1937). Sertularella fusiformis  is well distributed in temperate and subtropical parts of the Atlantic as well as in the Mediterranean, but records of occurrences elsewhere are few and dispersed ( Ramil et al. 1992). The latter are from the Indian Ocean coast of South Africa ( Millard 1975) and from the Pacific coast of North America: Californian Pacific coast ( Fraser 1911); off Heceta Head, Oregon ( Fraser 1937). I consider the reports of Sertularella fusiformis  from the Pacific coast of North America to be erroneous. Its biogeographic distribution, and the distinct morphological characteristics of Sertularella pacifica  set this species apart from its congeners. Even within the Atlantic, it is probable that the nominal species Sertularella fusiformis  is part of a species complex. Sertularella fusiformis  , along with S. mediterranea  , S. ellisii  , S. ornata  , and S. polyzonias  are morphologically similar and so have been variously kept separate or synonymised with other taxa ( Cornelius 1979; Ramil et al. 1992; Medel & Vervoort 1998). Millard (1958) considered S. fusiformis  to be a variable species, but accepted the diagnostic value of the presence of 4 intrathecal cusps that alternate with the marginal cusps in this species, a view shared by Corrales et al. (1980). Others, such as Picard (1956) considered S. fusiformis  to be an extreme, Atlantic form of S. ellisii  . 16 S genetic data has provided evidence that nominal species of Sertularella fusiformis  from Madeira and the Azores in the North Atlantic fall into distinct clades likely corresponding to different species ( Moura et al. 2011).

Etymology. The species name refers to the Pacific Ocean and emphasizes its distinctiveness from its congeners elsewhere. 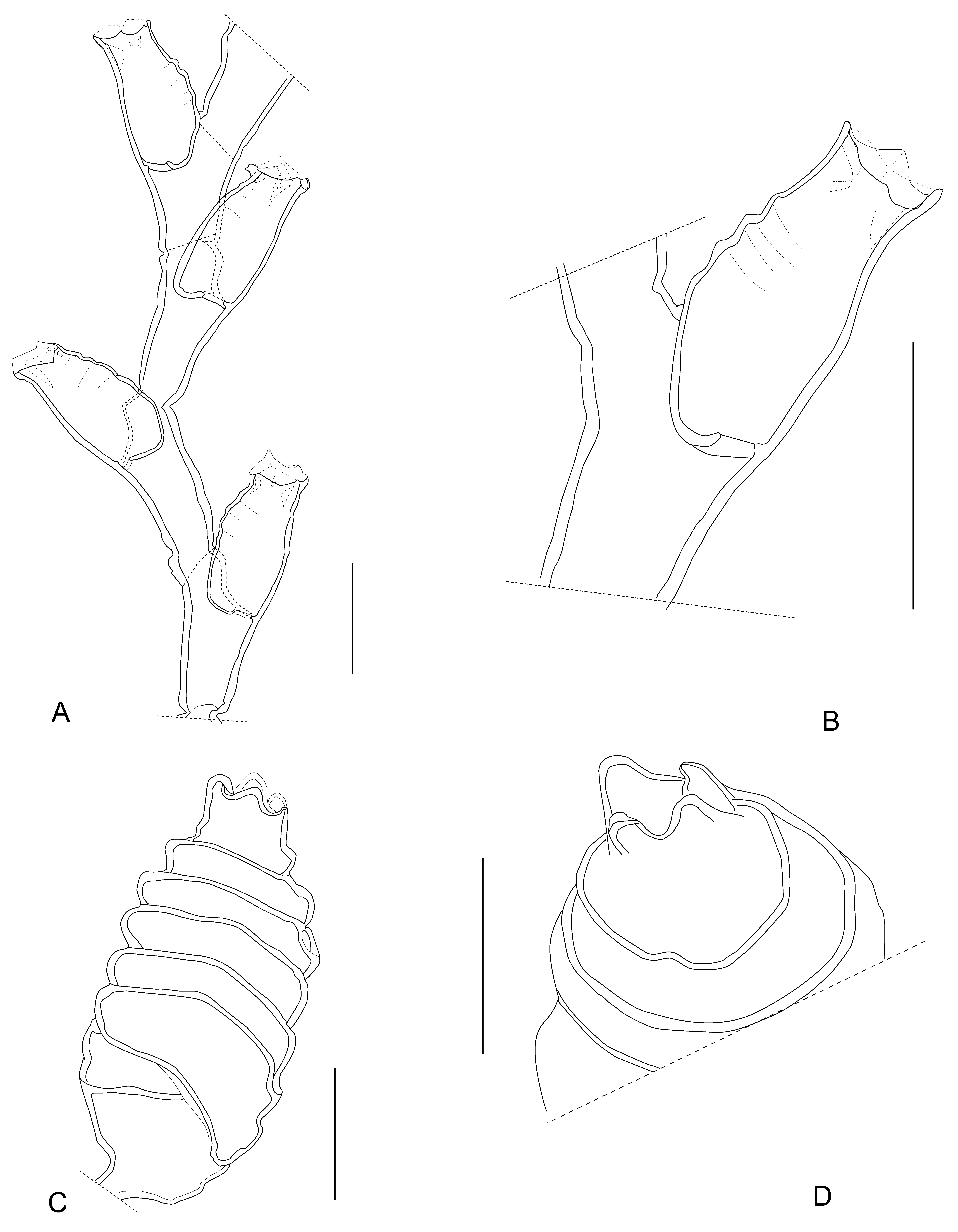 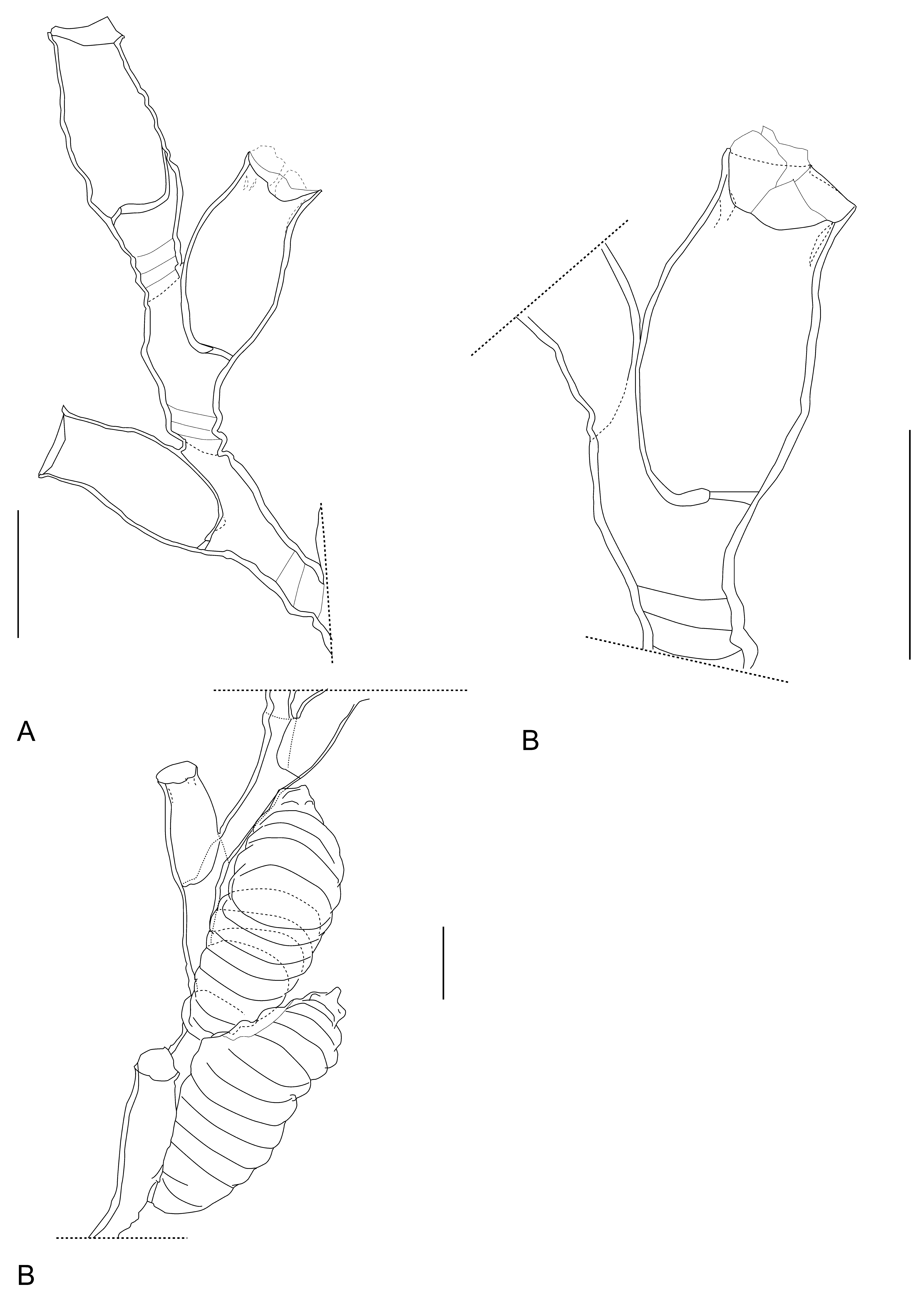