Diagnosis. Devario fangae   shares uniquely with D. browni   and D. kakhienensis   an anterior expansion in width of the P stripe. It differs from D. browni   and D. kakhienensis   in presence of a broad P stripe, wider than adjacent interstripes, vs. narrow, as wide as or narrower than interstripes. Devario fangae   is further similar to species of Devario   characterized by three dark stripes (P, P+1, P-1) along the side, but differs from these in having all three stripes wide and of similar width vs. P stripe wide and P+1 and P-1 stripes much narrower as in D. aequipinnatus   , D. acrostomus   , D. deruptotalea   , D. fangfangae   , D. fraseri   , and D. gibber   . In D. regina   and D. malabaricus   , the stripes are relatively wide but not wider than interspaces and the P stripe is split anteriorly by a short light interspace.

The status and diagnoses of D. assamensis (Barman, 1984)   from the Brahmaputra River in southern Assam, and D. ostreographus (M’Clelland, 1839)   , without locality, are uncertain, but both were described as extremely deep-bodied, and thus unlikely to be confused with D. fangae   . From D. devario   , D. fangae   can be distinguished by presence vs. absence of infraorbital process and rostral barbel; distinct vs. very shallow danionine notch; 9½–11½ vs. 15½–17½ dorsal-fin rays; 30–32 vs. 42–47 lateral line scales; and 12 vs. 16 circumpeduncular scales.

Devario fangae   can be distinguished from all remaining species of Devario   also by the striped colour pattern, vs. a pattern of large blotches as in D. kysonensis   , D. pathirana   , or smaller blotches as in D. quangbinhensis   ; a very narrow posterior P stripe as in D. chrysotaeniatus   , D. laoensis   , D. leptos   , D. micronema   , D. neilgherriensis   ; vertical bars as in D. apogon   , D. apopyris   , D. auropurpureus   , D. interruptus   , D. jayarami   , D. maetaengensis   , D. salmonatus   , D. shanensis   ; uniform, with or without a thin dark stripe posteriorly on the side as in D. acuticephala   and D. sondhii   ; P stripe separated into two blotches as in D. anomalus   ; or wide P stripe posteriorly on side, but no other dark stripes as in D. naganensis   . From barred devarios, D. fraseri   , and D. malabaricus   , D. fangae   can be distinguished further by presence vs. absence of infraorbital process.

Description. Based on specimens in measurement series, with notes on variation. Largest female 61.0 mm SL, largest male 58.8 mm SL. Measurements are presented in Tables 1–2 View TABLE 1 View TABLE 2 . Counts for holotype are marked with an asterisk.

Lateral line complete, along 30 (8), 31* (7), 32 (5) scales, and 2 scales on caudal-fin base; comprising one tubed scale followed by a canal running steeply caudoventrad under about 5 unperforated scales to slightly posterior to pectoral-fin base, where curved caudad and represented by perforated scales running in a curve parallel to the ventral body outline and ending low on caudal peduncle and caudal-fin base; continued by two scales on caudal-fin base. Median predorsal scales 13 (8), 14* (12). Lateral scale rows passing between dorsal and pelvic fins ½7+1+2½* (20). Circumpeduncular scale rows 12* (20). A row of scales along anal-fin base. About ¼ of caudalfin length scaled basally.

Etymology. This species was singled out by the late Fang Fang (1962–2010) for description as new, including separation of the holotype, and it seems pertinent to attach her name to it as the proper discoverer, and also recognizing her deep personal interest in the freshwater fishes of Myanmar. A noun in the genitive case. 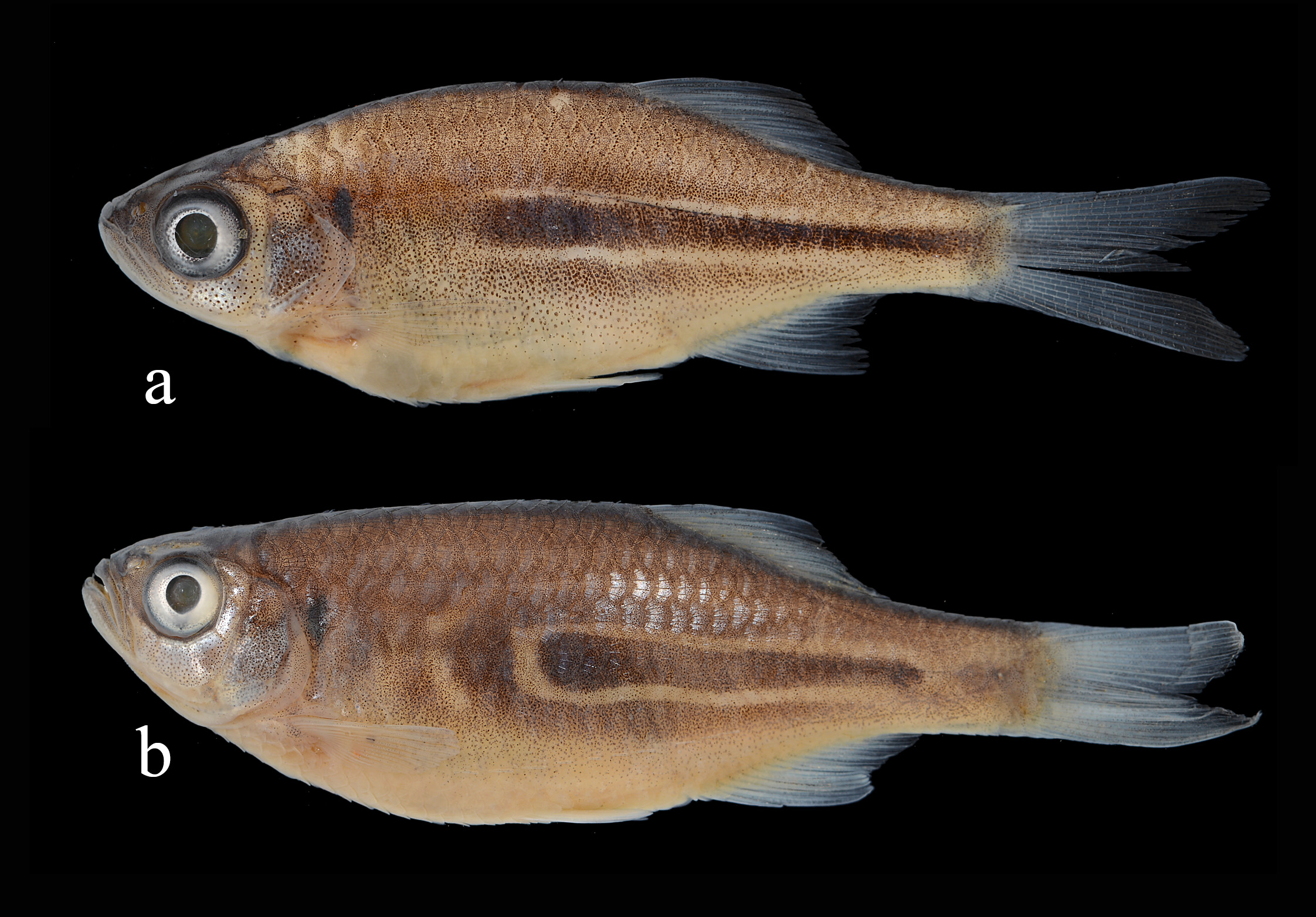