Etymology: the name “ graziae ” is a patronym honoring Dr. Jocelia Grazia, in recognition of her many decades of work to help advance our understanding of Heteroptera.

Comparative notes. In overall body form, O. graziae is similar in some respects to O. victor , but is smaller and stouter, with darker overall coloration and more limited pale markings (compare Figs. 1, 2 View FIGURES 1–4 ). It is easily distinguished from the two previously described species of Ocyochterus by its broad and robust body form and dorsal coloration, with no areas of yellowish coloration on the lateral flanges of the pronotum, and a reddish-brown dorsal ground color overlain with scattered small flecks of pale bluish to lavender coloration (compare Figs. 1, 2, 4 View FIGURES 1–4 ). The frons of O. graziae is most similar to that of O. irmae , but with the transverse striae deeper and more extensive, and the lateral areas of pale brown coloration extending further posterad adjacent to the inner margins of the eyes (compare Figs. 5, 8 View FIGURES 5–8 ).

The male genitalia are similar in many respects to those of the previously illustrated for O. irmae (D. Polhemus & J. Polhemus 2014) , although the right paramere is much more reduced in size. The proctiger is somewhat narrower and more elongate than in O. irmae ( Fig. 10 View FIGURES 9–14 ), and the process on the posteromedial margin of the pygophore is more truncate ( Fig. 13 View FIGURES 9–14 ). The right paramere is very elongate and similar to O. irmae , including the possession of a transverse ridge near the middle of the distal arm, while the left paramere has a more concave upper margin and the apex of one of the lateral processes slightly more acute ( Fig. 12 View FIGURES 9–14 ). The aedeagus is also largely similar to O. irmae , although the elongate distal flagellum projecting beyond the phallotheca is slightly shorter in O. graziae ( Fig. 11 View FIGURES 9–14 ).

The females listed here from 32 km E. of Banos are presumed to represent this species based on body form, and origination from a collection site near the type-locality, but in the absence of a male the identification cannot be verified with certainty. As such, this series is not included as paratypes.

The immature in hand probably represents instar III or IV, although this cannot be conclusively determined in the absence of a full developmental specimen series. The body is uniformly pale brown in coloration, with the legs uniformly pale yellow. The anterior margin of the frons bears a transverse row of 8 short, evenly-spaced, spinelike setae above the base of the labrum; these setae are not present in the adult. The posterior margin of the frons is clearly delineated from the vertex and eyes by a prominent, arcuate sulcus. The pro-, meso- and metanota are all well defined, but the scutellum and wing pads are not yet evident in this developmental stage. The entire dorsal surface is set with numerous small, shallow punctillae. Ventrally the rostrum is long and reaches to the posterior apices of the hind coxae, as in the adult.

Ocyochterus graziae is the third species in the genus known from the Ecuadorian Andes, with three of the four described species occurring in close geographic proximity to each other in the vicinity of Quito. Of these three species, O. irmae is by far the most broadly distributed, occurring from Colombia to northern Ecudaor; O. graziae is known from the length of Ecuador; and O. victor is known only from a circumscribed area in central Ecuador ( Fig. 21 View FIGURE 21 ). Given the infrequency with which Ocyochterus species are collected, however, these apparent patterns of distribution must be considered provisional.

Ecological notes. According to label data, the female specimens in hand that are presumed to represent this species were taken from “seepage over rock outcrops,” which is similar to the situation in which the author previously encountered O. irmae in the Colombian Andes. No other ecological information is at hand. It is likely that O. graziae , and probably all Ocyochterus species, are specialized inhabitants of hygropetric habitats. 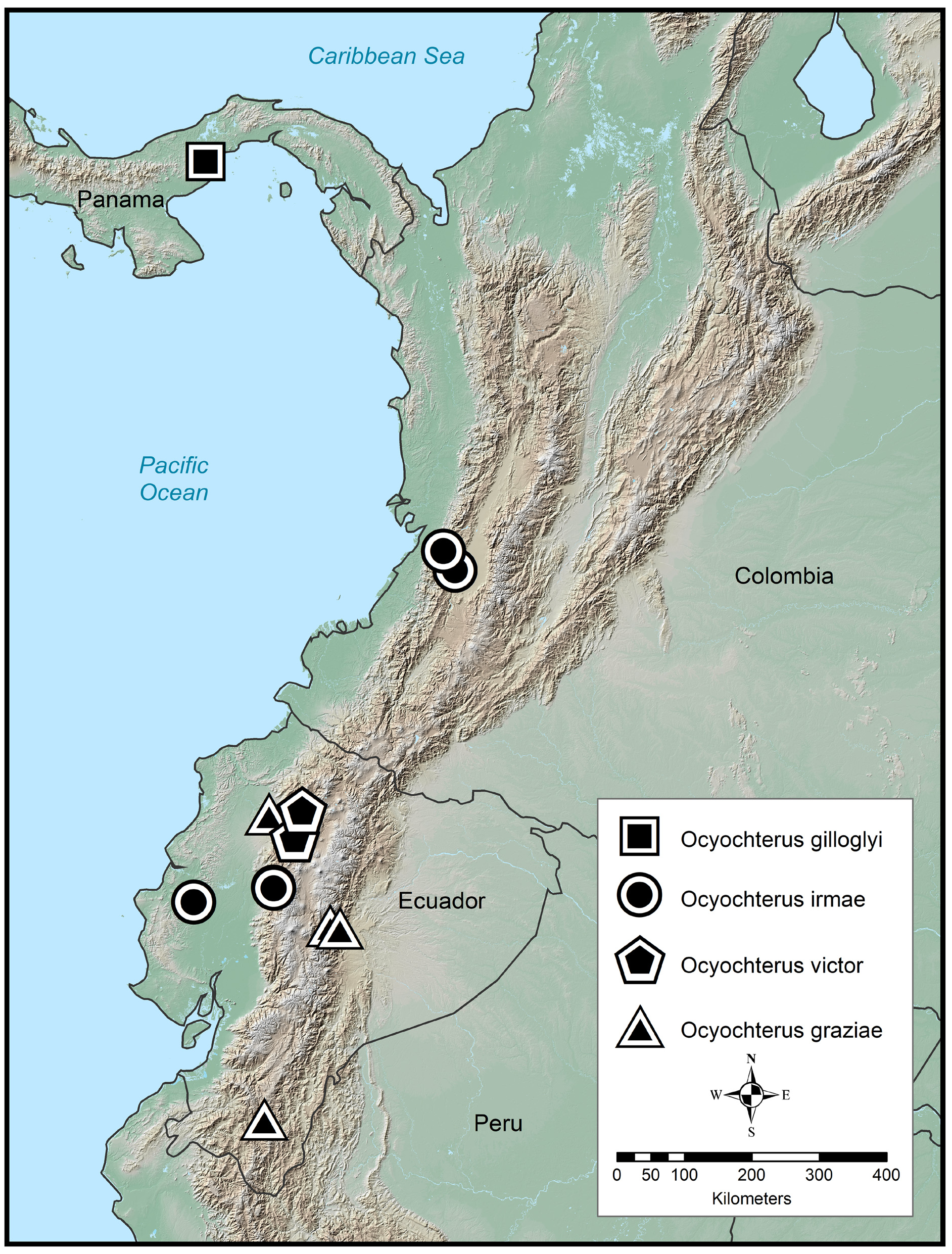