Referred Specimens from Provincia Chimborazo ( QCAZ 3870, 3871, EPN 3307) are dorsally predominantly black, but have some cream blotches. QCAZ 3871 has a black dorsum with cream blotches, one on the snout, one on the upper eyelid, a small one on the interorbital region, two on the scapular region, and three on the sacral region; the flanks are black with minute white tips of spiculae. The loreal and suborbital regions are cream stippled with brown; the lower lip, throat, and chest are entirely white, whereas the belly and undersides of the limbs are black, except for a large white mark on belly. The palmar surfaces are white, and gray digits contrast with white tips of fingers dorsally, and all of Finger II is white dorsally. The dorsal surfaces of the feet, and soles are black; the ventral surfaces of Toe I, tips of toes, and metatarsal and subarticular tubercles are white. QCAZ 3870 differs from the previous individual by having the dorsum posterior to the head entirely black, whereas the dorsum of the head is mostly black with diffuse gray on the snout; the belly has four cream blotches and palms are mostly cream. EPN 3307 differs from QCAZ 3871 by having the dorsum of head mostly cream and four asymmetrical cream round blotches on the dorsum of the anterior part of body, the throat with a small black blotch, and the belly with a large white mark

Color in life. Peters (1973: 35) described specimens from Provincia Napo (Chalpi, Oyacachi and Papallacta) as follows: “The lighter dorsal areas are bright yellow. Many of the warts and pustules have white tops. The ventral surfaces are white in almost all individuals, but some may have orange areas or spots and some have red bellies.”

Two components with eigenvalues> 1.0 were extracted from the PCA of eight morphometric variables of 26 specimens from populations throughout the range of Atelopus petersi  . The axes accounted for 57.5 % of the total variation. Along PC I, the highest loadings were for FL and HLSQ. Along PC II, the highest loadings were for SW and SVL. There is a wide overlap among the morphometric range of these populations.

Peters (1973) discussed a series of specimens in the Gustavo Orcés collection (GOV 8698 – 700, currently USNM 236942 – 44) resembling Atelopus petersi  (i.e., A. pachydermus sensu Peters, 1973  ), from the Andes of Provincia Loja in southern Ecuador. He stated that these specimens were identical to those from Oyacachi. However, these specimens are unicolor cream, in contrast to Oyacachi specimens. Because at that time A. petersi  ( A. pachydermus sensu Peters, 1973  ) was unknown from the area between Napo and Loja, Peters (1973: 37) suggested that the locality data were erroneous. However, we prefer to assume that the Loja population may refer to a distinct (unnamed) taxon, although they are morphologically similar. Our PCA analysis shows that morphometric variation between the Loja specimens and A. petersi  widely overlaps. Our assumption is based on the large geographic gap between A. petersi  and the Loja population. Nonetheless, resolution of this issue will require further analyses of Atelopus  specimens and populations from intermediate areas and from Loja and Azuay.

Distribution, ecology and current population status. According to our data, Atelopus petersi  occurs in the Cordillera Oriental of the Andes in Ecuador, Provincias Napo and – according to specimens tentatively referred to the new species – Chimborazo ( Fig. 6View FIGURE 6), at elevations of 2660–3300 m above sea level. The area in which A. petersi  occurs includes Cloud Montane Forest and High Montane Evergreen Forest, following the classification of the natural plant formations of the Ecuadorian Andes ( Valencia et al., 1999). Annual mean precipitation is about 1000–2000 mm and annual mean temperature is about 12–18 ºC ( Cañadas-Cruz, 1983). According to Peters (1973), A. petersi  (as A. pachydermus  ) occurs sympatrically with A. ignescens sensu  stricto ( Cornalia, 1849).

Knowledge on the life history of Atelopus petersi  is poor. KU 117874View Materials – 79 were collected on 7 March 1968 under rocks at the edge of a stream. KU 142950View Materials was collected in 27 October 1971 in streambed by day. KU 142951View Materials – 54 were collected in 17, 27 and 28 October 1971 under logs on grassy hillside. The referred specimen EPN 3307 (female) was collected active on cushions plants in paramo habitat at 10: 59 hrs on 19 September 1986. QCAZ 298–302 (two males, three females) were collected on April 1988 during the day when active on a trail. A juvenile ( QCAZ 3154) was collected on 30 March 1988. QCAZ 4555 (female) was collected on 19 August 1993 when walking along the border of the Río Oyacachi. QCAZ 7678 was found dead, at 1 Km E of Oyacachi, on 8 November 1996. This is the latest record for this species from Provincia Napo. Despite occasional efforts to locate A. petersi  subsequently (one visit to Oyacachi on September 2003, two visits to 11 Km East of Papallacta on January and August 1999, four visits to Atillo on May 2001, on 15 and 30 June 2002, and on April 2006), no additional individuals have been found. According to Peters (1973: 36), in the past, A. petersi  was “extremely common” in the vicinity of Papallacta, where it was found along the Río Papallacta, under rocks in moist, and spongy runoff areas. Interviewing local people at Oyacachi and Papallacta, they were familiar with these toads. Several different-aged persons revealed that these toads once were abundant but have not been seen for several years, although in Oyacachi some people claimed, on September 2003, that from time to time they still see single individuals.

Remarks. The color pattern of specimen JAP 2267 of Atelopus petersi  , and depicted on Figs. 26–27 in Peters (1973) from the environs of Papallacta conforms well to the color pattern of the holotype of A. bomolochos  ( CAS 91930View Materials; Peters, 1973: Fig. 15View FIGURE 15). This resemblance might be homoplastic, plesiomorphic, or indicate a close phylogenetic affinity between them.

Etymology. The specific name is a noun in the genitive case and it is a patronym for James A. Peters, in recognition of his discovery of this species in 1962 and posterior detailed description in 1973. As well, we recognize his contribution to Atelopus  taxonomy. 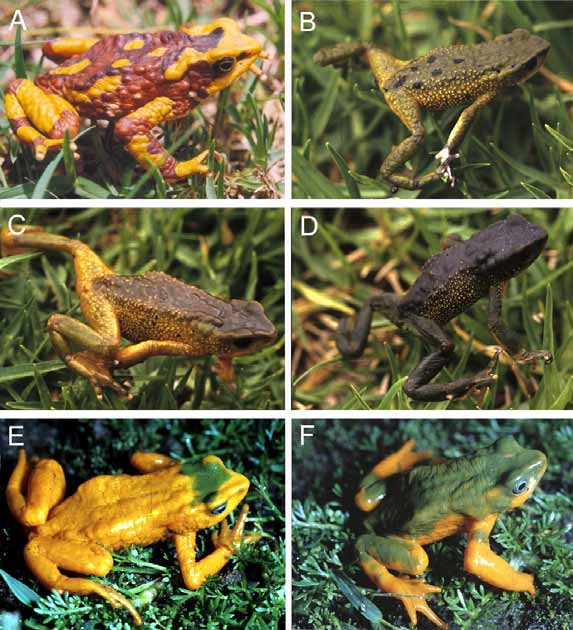 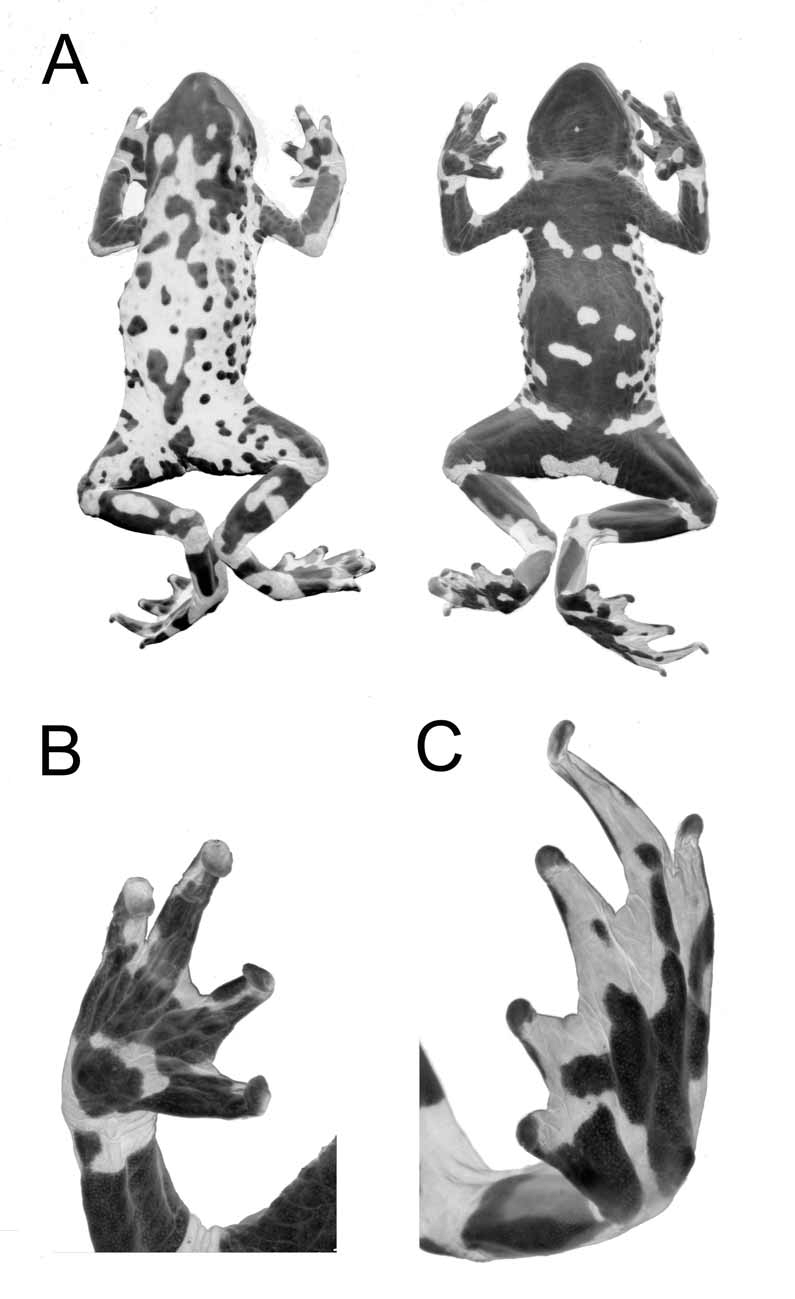 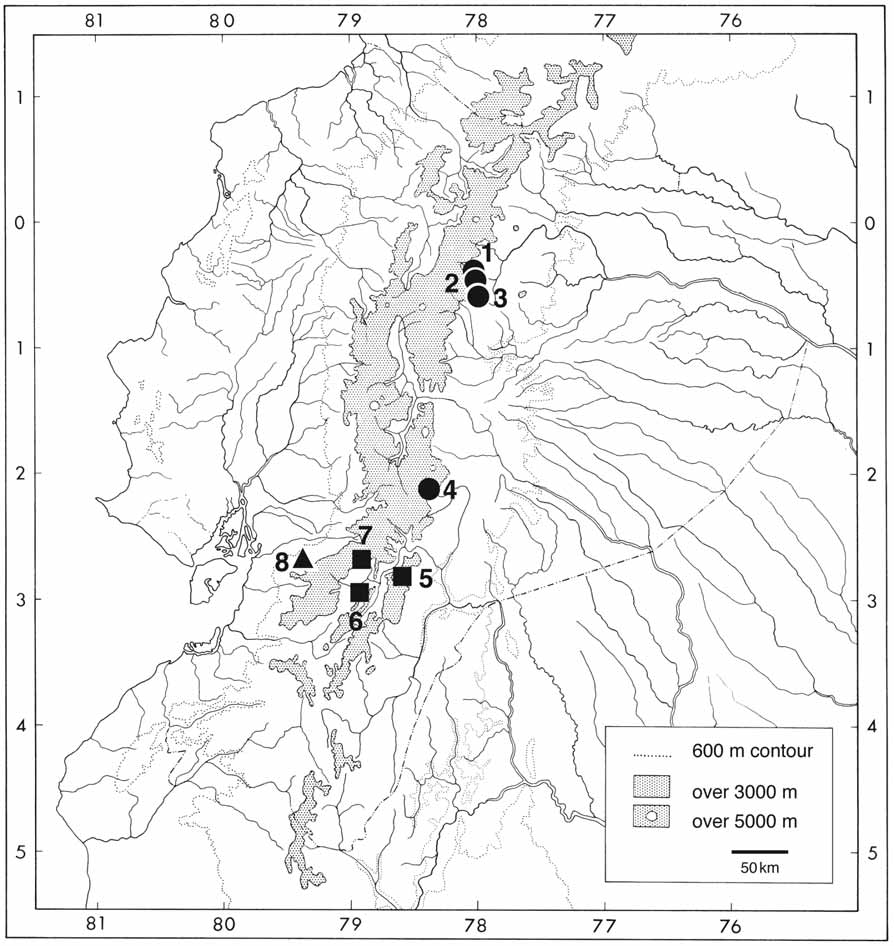 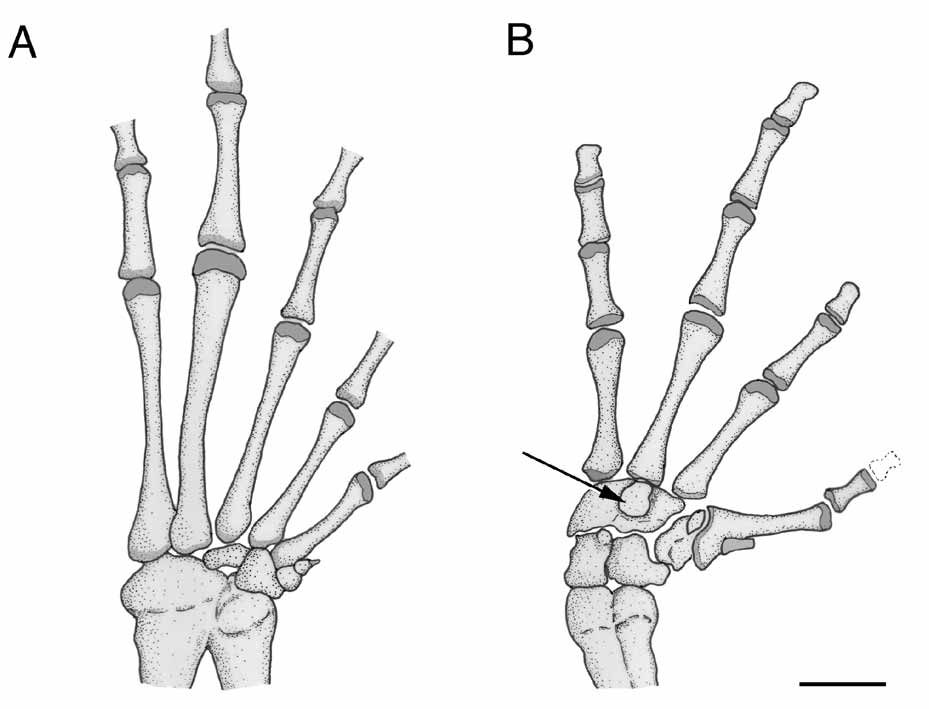