Head. Frontovertex with polygonal reticulate sculpture, clothed with sparse black setae, about one-third head width; ocelli forming an acute angle; eyes clothed in very fine, inconspicuous setae and slightly overreaching sharp occipital margin; torulus midway between lowest eye margin and clypeus, separated from each other by about 1.5 × own diameter; antenna with scape subcylindrical, 5 × as long as broad; pedicel subtriangular, as broad as scape, 1.8 × as long as broad; funicle with F 1 –F 3 subequal in length, moniliform, F 4 and F 5 equal in length and width, F 6 widest, ratio of width and length for each segment: 1.3, 1.7, 1.3, 1.25, 1.25, 1.5; clava 3 -segmented, its apex with a distinctly oblique truncation ( Fig. 1View FIGURES 1 – 7); mandible with three acute teeth ( Fig. 9View FIGURES 8 – 13); maxillary and labial palpi 4 - and 3 - segmented respectively.

Mesosoma. Dorsum clothed with fine setae except apical half of scutellum smooth; pronotum very short, about one sixth as long as mesoscutum, with polygonal reticulate sculpture; mesoscutum subquadrate, about 1.4 × as broad as long, sculpture as pronotum; scutellum about 1.3 × as long as broad, sculpture anteriorly similar to that of mesoscutum, posteriorly shallower and smooth; fore wing ( Fig. 2View FIGURES 1 – 7) about 2.5 × as long as broad; costal cell with more than one line of setae dorsally; linea calva more or less closed by a single line of setae dorsally; marginal vein about as long as postmarginal vein but more or less shorter than stigmal vein, which is more or less scimitar shaped.

Metasoma. About as long as mesosoma; genitalia ( Fig. 33View FIGURES 31 – 34. 31 and 33) with distinctly long and slender aedeagus, about 1.4 × as long as mid tibia; phallobase with elongate parameres and digiti, each of which with one apical hook.

Etymology. The specific epithet is derived from the latin words “long” and “caud” referring to the long ovipositor sheath for the new species. 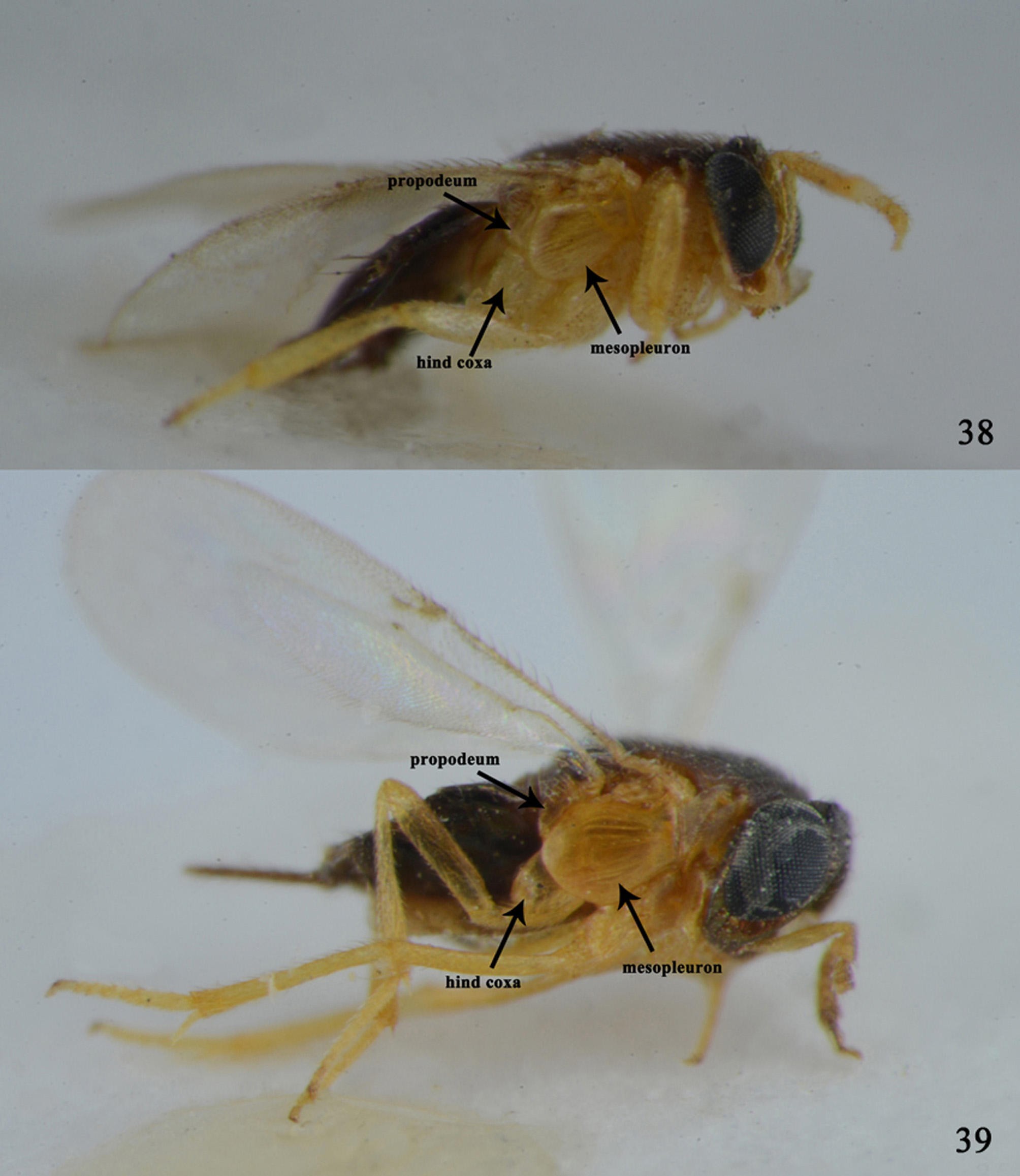