Mniarogekko chahoua  — No subspecies have been described and no synonyms exist for Mniarogekko chahoua  , nor have previous authors discussed intraspecific variation in the context of possible taxonomic significance. However, our results reveal relatively large intraspecific divergence within this taxon ( Figs. 1–2View FIGURE 1View FIGURE 2). Seipp and Henkel (2000) first noted that M. chahoua  occurred in far northern New Caledonia, northeast of Koumac, and speculated that the species might be distributed island-wide. Specimens from this same population, at Rivière Néhoué, were reported on extensively by Langner (2009). Mniarogekko chahoua  specimens from recently discovered northern populations on Île Art in the Belep group and at Vallée Poupoule, Dôme de Tiébaghi, and Rivière Néhoué in the far northwest of the Grande Terre ( Whitaker et al. 2004; Bauer et al. 2006 b) are morphologically similar to one another but 7.8 % divergent with respect to more southern Grande Terre specimens from Sarraméa and the Vallée d’Amoa. Specimens from these latter two localities are likewise highly genetically divergent from one another, but existing sample sizes are small and morphological differences between them have not yet been identified. All northern samples come from ultramafic areas, whereas those from the east-central and more southern Grande Terre populations are from low elevation (vallicole) habitats on non-ultramafic substrates ( Fig. 17View FIGURE 17). Bauer (1985) reviewed M. chahoua  , then known from very few specimens, and designated a specimen from the Vallée d’Amoa as the neotype (many captive M. chahoua  supposedly derive from Île des Pins stock and these are stated by herpetoculturalists to differ from Grande Terre M. chahoua  ; however, we have not encountered Mniarogekko  on the Île des Pins and have not examined museum specimens from this locality, therefore, we are unable to evaluate their taxonomic status). We believe that genetic and morphological differences warrant the description of a second chahoua  -like species to accommodate the northern populations sampled here. This is described below: FIGURE 1. Maximum likelihood tree based on the mitochondrial ND 2 gene and flanking tRNAs showing relationships among species of New Caledonian diplodactylids and their immediate sister-group, the Australian genus Pseudothecadactylus. Values subtending branches are maximum likelihood / Bayesian posterior probabilities above the line and maximum parsimony bootstrap values below the line. Dashes for posterior probabilities indicate no support for the maximum likelihood topology whereas dashes for maximum parsimony bootstraps indicates values <50 %. Support values are not shown for conspecific relationships where samples differ by three or fewer bases. In the case of Rhacodactylus auriculatus southern ultramafic block samples are cumulatively represented as a triangle. 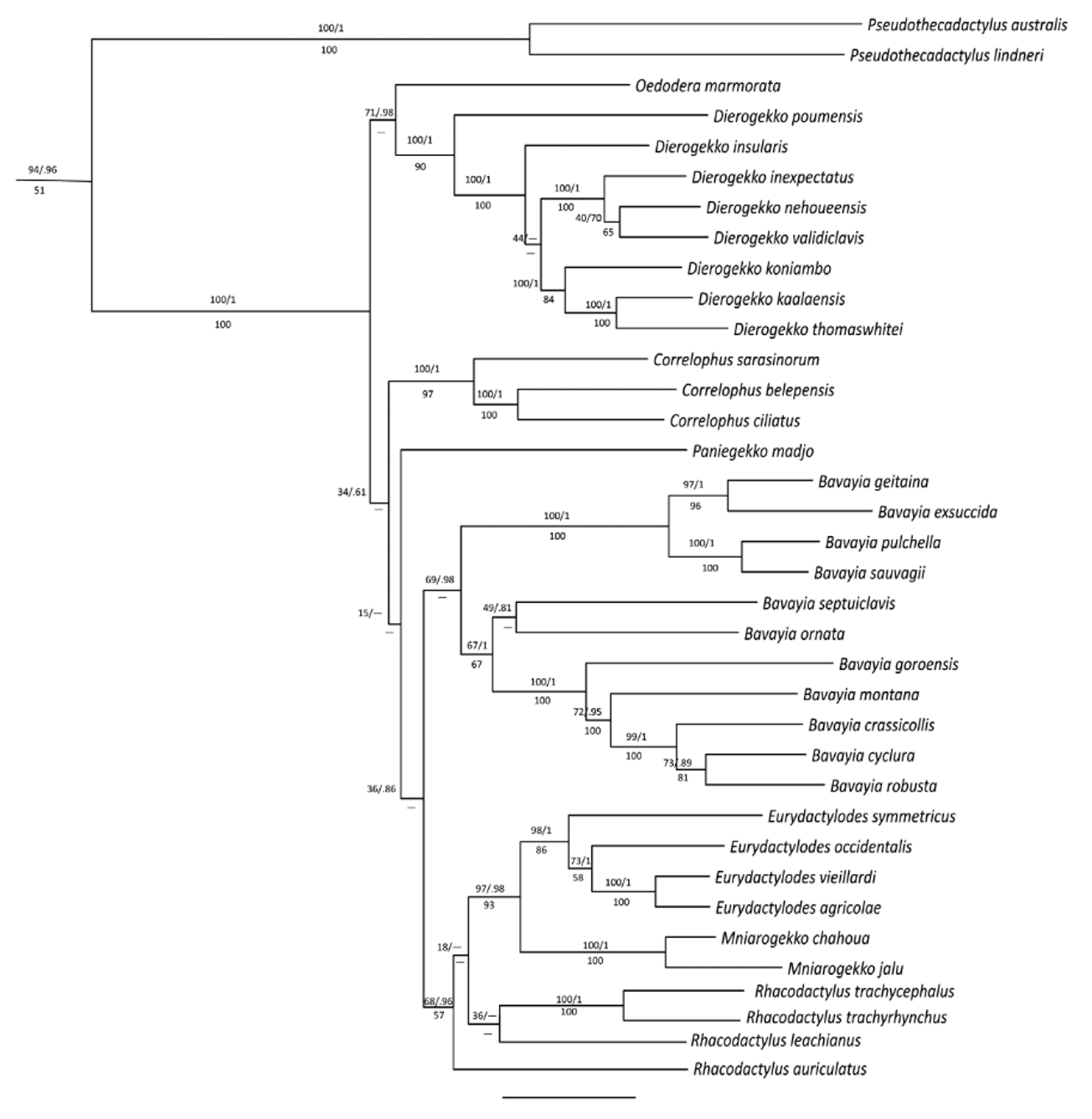 FIGURE 2. Maximum likelihood tree based on the combined mitochondrial (ND 2 and flanking tRNAs) and nuclear genes (RAG 1) showing relationships among species of New Caledonian diplodactylids and their immediate sister-group, the Australian genus Pseudothecadactylus. The tree has been pruned to show only one exemplar for each taxon. Both intra- and interspecific patterns of relationship are nearly identical to those supported by ND 2 only (Fig. 1). Only within Dierogekko and Rhacodactylus sensu stricto are alternative patterns hypothesized (see text). Values subtending branches are maximum likelihood / Bayesian posterior probabilities above the line and maximum parsimony bootstrap values below the line. Dashes for posterior probabilities indicate no support for the maximum likelihood topology whereas dashes for maximum parsimony bootstraps indicates values <50 %.