Distribution. Tropical South-West Pacific, off the Solomon Islands; Santa Cruz Islands and Guadalcanal. Probably more widespread in Oceania but limits of its distribution need to be defined.

Remarks. The two former syntypes ( MNHN 2440, 156 and 159 mm DW) from the eastern Solomon Islands (Vanikoro) are both females, presumably immature. The designated lectotype (156 mm DW) has strongly faded skin, almost pale brown with evidence of very small, white ocelli on both (confined to two spots on right side), with the tail intact; white central core of ocellus 1.2–1.7 mm diameter, surrounded by thin darker ring ~ 0.5 mm; the tail is mainly pale with two dark saddles confined to the dorsal part after caudal sting; entire tail tip is brownish on both surfaces. The designated paralectotype (159 mm DW) has ~29 similar-sized ocelli (some possibly missing), still evident beside orbits and irregularly dispersed over disc (diameter white core 1–2.6 mm); additional dark speckles are present on the orbital membrane, interorbit and over the central disc (<1.5 mm diameter). In both specimens, the posterior margins of ventral disc are probably darker than centrally; outer edge of ventral fold darker than its base (discussed by Müller & Henle, 1841).

A third much smaller syntype ( MNHN A7931) collected from New Guinea by Quoy & Gaimard, is a late-term male embryo (~ 100 mm DW) with a rudiment of its umbilical cord still evident. The specimen is heavily bleached, being uniformly pale with no indication of colour ( Fig. 3a View FIGURE 3 ). Morphometrics of these preserved types may be slightly affected by preservation, as the lectotype in particular has very flexible skin that may alter some anterior measurements. The fourth syntype from Leiden is probably RMNH 2472, an adult male (~ 270 mm DW) which is dried and stuffed ( Fig. 3b View FIGURE 3 ).

Identification of the primary type specimen used in the Müller & Henle’s description and excellent figure to designate a lectotype of the species has proven problematic. The number of blue spots and the presence of two caudal stings in their figure does not coincide with any of the types. Also, the illustration is of a female whereas the probable Leiden syntype is an adult male. Either their illustration is a composite image (most likely) or the dry Leiden adult male is not a syntype. The Leiden type ( RMNH 2472) is listed as from Java, collected by Kuhl & van Hasselt. Müller & Henle’s description, the type location is listed as ‘Indien’ which although often presumed to be India, was often used for East India or East Indies, present day Indonesia. Thus, this provides some support for the Javan specimen as the fourth syntype of T. kuhlii . But it should be noted that in other species descriptions, Müller & Henle refer to Java in the locations provided so there is still an element of uncertainty over the exact syntype specimen. Müller & Henle’s description also refers to a sting (rather than two): ‘der Stachel am Ende des vordem Viertels’. Still, a discrepancy remains as to their sizes; the syntype measured appears to be about 139.5 mm DW (largest width '5 Zoll, 4 Linie' based on Müller & Henle) which is much smaller than the first size of maturity of any member of the kuhlii -complex. The paucity and very small sizes of blue spots appears typical of maskrays from the Solomon Islands; blue-spotted maskray populations from India (inferentially specified as the location of the fourth syntype by Eschmeyer, 2016) and Indonesia (often referred to as ‘Indien’ in old museum labels and incorrectly accorded to India) have medium to large blue spots, usually in much higher densities. The size of spots and their distribution in Müller & Henle’s figure ( Fig. 1) is very similar to that of the two Vanikoro types ( Fig. 2 View FIGURE 2 ). On that basis, the most complete MNHN specimen, a 156 mm DW female in good condition with tail and caudal sting intact, is hereby designated as the lectotype. The second Vanikoro type becomes a paralectotype. This embryonic syntype ( MNHN A7931) probably equals N. australiae sp. nov., and the dried RMNH syntype probably equals N. caeruleopunctata sp. nov. based on its size and capture location. 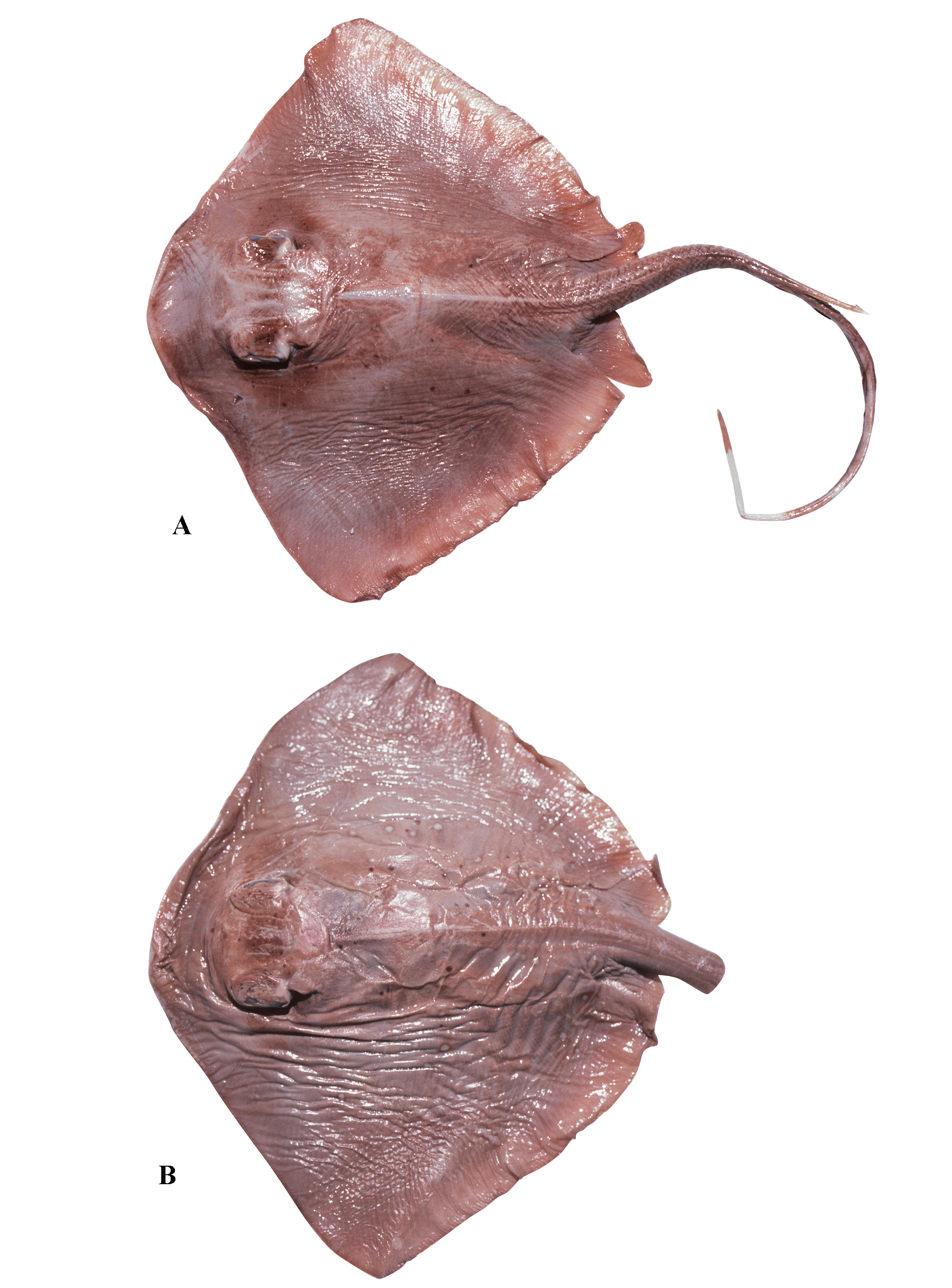 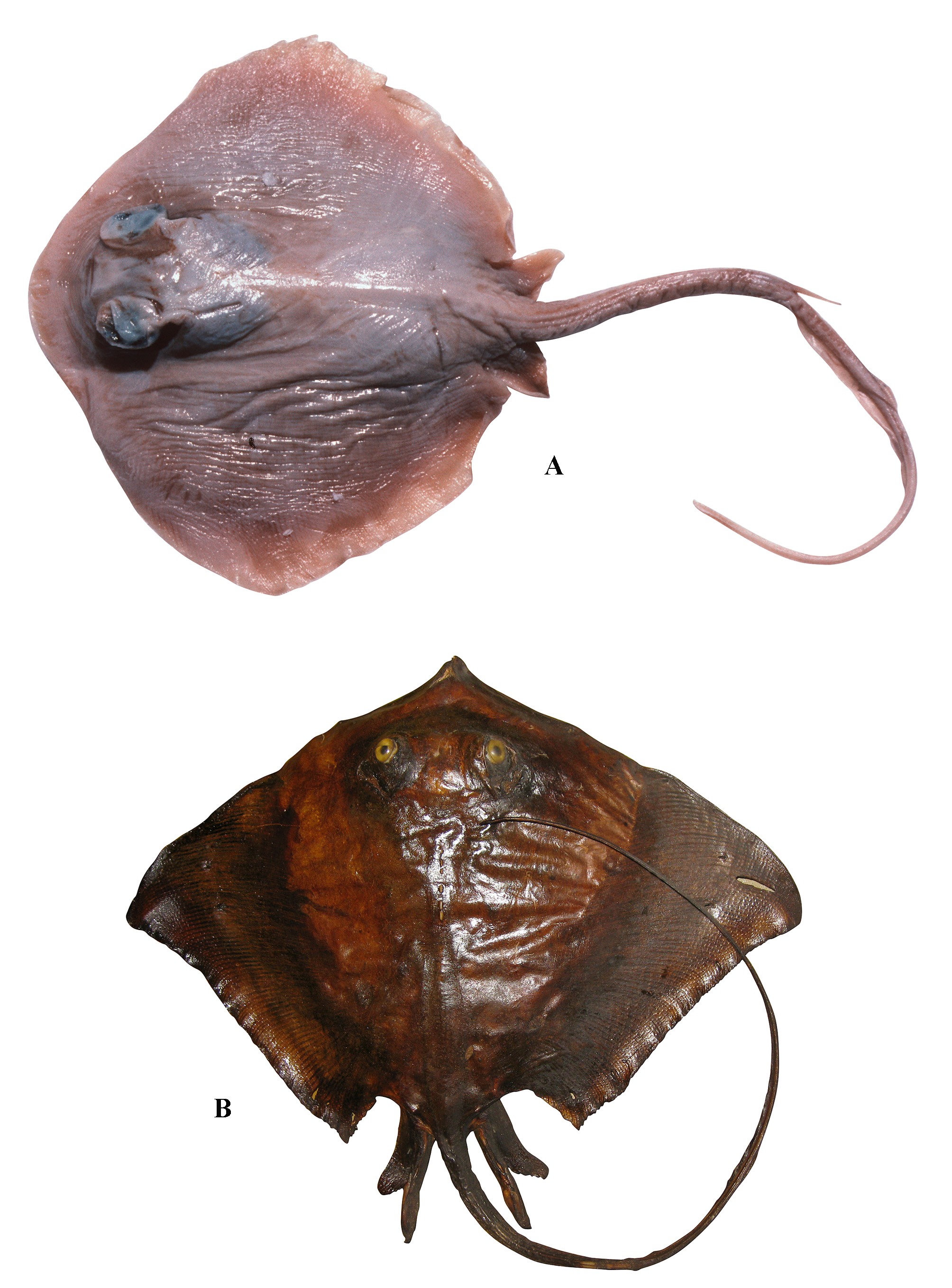 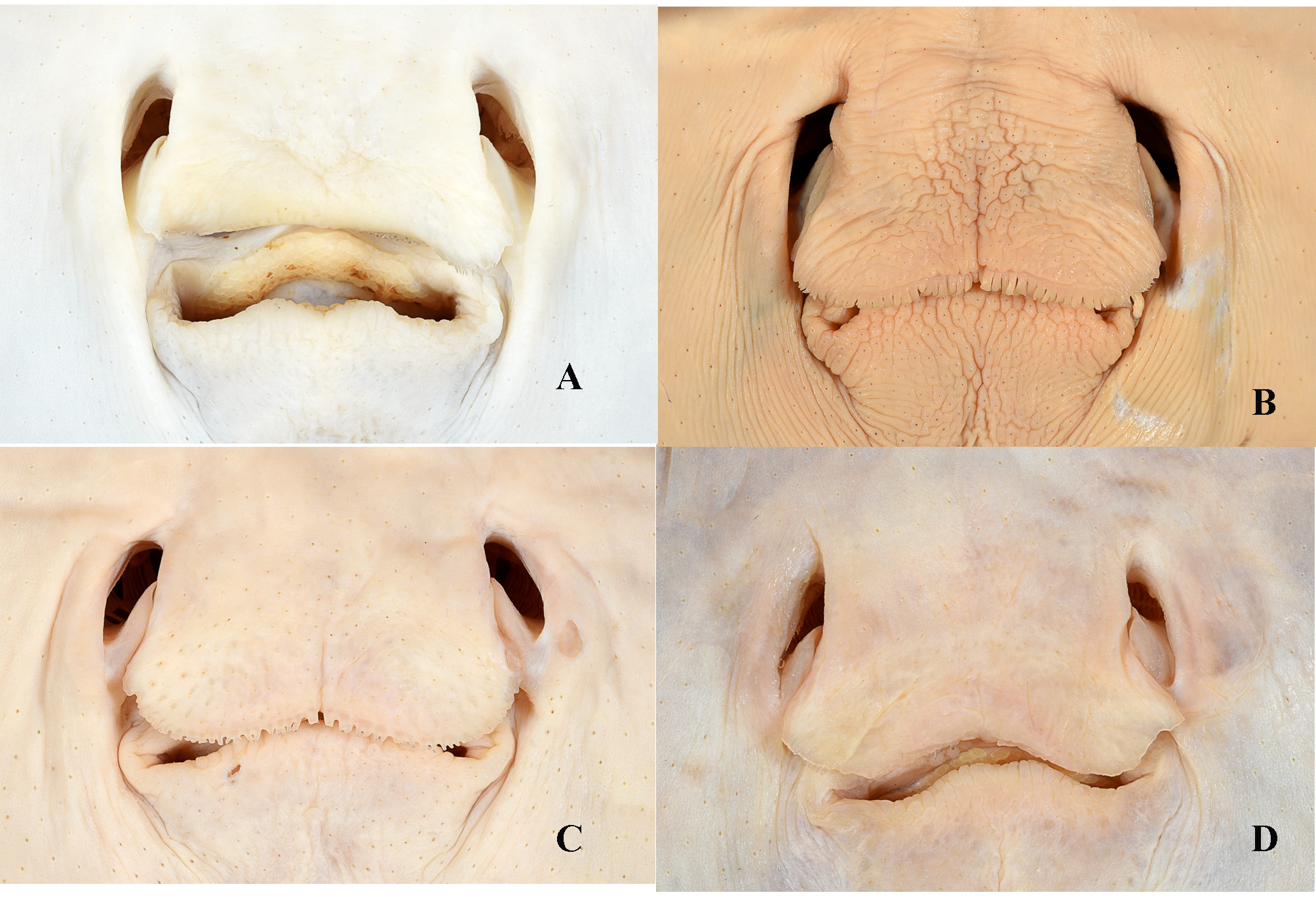