Status of Foa longimana Weber, 1909  . There are only three literature records of Foa longimana: Weber  in 1909, Weber in 1913 and lastly Weber & de Beaufort 1929, where the original German description was translated into English. Eschmeyer (2014) has no new entries under Foa longimana  or under any other cardinalfish genus. There are no listings in the available online collections. What could be the reasons for the lack of material?

Weber (1909) described Foa longimana  from one specimen, 14.2 mm SL (19 mm TL) taken in the water column (pelagic sample), (station 234 in the Siboga text, 238 in the table, p. 621) at Nalahia, Nusa Laut, Indonesia. He figured this specimen (here as Fig. 2View FIGURE 2 B) in the results of the Siboga Expedition (1913, figure 58; also in Weber & de Beaufort). This is a young specimen, perhaps about to settle out of the plankton. Both Foa  and Fowleria  Jordan & Evermann 1903 have larva with long pectoral fins and the fish flap like butterflies in the water column according to J. Leis (personal communication). The type has a slender body depth at 33 % of standard length taken from the specimen by me in 1972. Most species of Foa  have body depths of 37 % or greater in standard length ( Fraser & Randall, 2011; this paper) The pectoral fins are damaged but figure 58 suggests the length is about 30 % of standard length where as the head length is 38.7 % of standard length. Weber described the pectoral fin as “Pektorale fast so lang wie die Körperhöher.” “...almost as long as the head”. Most species of Foa  have pectoral fin lengths of 21–26 % of standard length ( Fraser & Randall, 2011; this paper). Only the number of pored lateral line scales at 11 reported by Weber (my count was nine) and the presence of palatine teeth (3‒4 teeth) are in favor of Foa  . There is known variation in the number of pored lateral line scales with size for Foa ( Fraser & Randall, 2011)  . This holotype cannot be certainly identified.

Alternative I. It is a species of Foa  . The reason for the differences in body depth is allometric growth after settling out of the plankton. I have no data to accept or reject this growth assertion (a likely change) and likely no way to identify the adult form because of poor color pattern information. Pectoral fin-ray counts for species of Foa  are usually 12 not 14.

Alternative III. It is a species of Apogonichthys Bleeker 1854  . Palatine teeth are absent in species of this genus. Assume that small Foa longimana  lose these four teeth with age/size. If so, some known characteristics fit with Apogonichthys perdix Bleeker 1854  , A. landoni Herre 1934  or A. ocellatus ( Weber 1913)  . The best fit as an Apogonichthys  is with A. perdix  , because A. ocellatus  has a high pectoral fin-ray count of 17–18 and an ocellus in the first dorsal fin. Apogonichthys perdix  has a deeper body depth so allometric growth would have to occur. Both Apogonichtys perdix  and A. landoni  agree in the cycloid scales on the cheek, VII first dorsal spines, and number of pectoral fin-rays.

Alternative IV. It is a species of Fowleria  . Palatine teeth are absent in species of this genus. Assume that small Foa longimana  lose these teeth with age/size. The best fit with species of Fowleria  is with F. vaiulae  Jordan & Seale 1906 because it lacks an ocellus on the opercle. Some allometric growth would have to occur. It agrees in cycloid scales on the cheek and VII first dorsal spines.

Weber’s type specimen exists ( ZMA 112.203), and his description meets the requirements of the International Code of Zoological Nomenclature to be a valid name. No additional specimens have been reported in the literature. Its true identity is a mystery. At present, it cannot meet the Code’s date requirement under Article 23.9 relating to the lack of use applied to an older name after 1899 as a nomen oblitum, that is, reversal of priority. A reasonable junior synonym cannot be identified, although the genus Neamia  has the best morphological fit. The name is treated here as a nomen dubium in the Apogonichthyini Snodgrass & Heller 1905 in Mabuchi et al. 2014. Weber’s name remains available should better information emerge, such as raising specimens among the four alternatives from eggs or larvae that lead to a species identification. 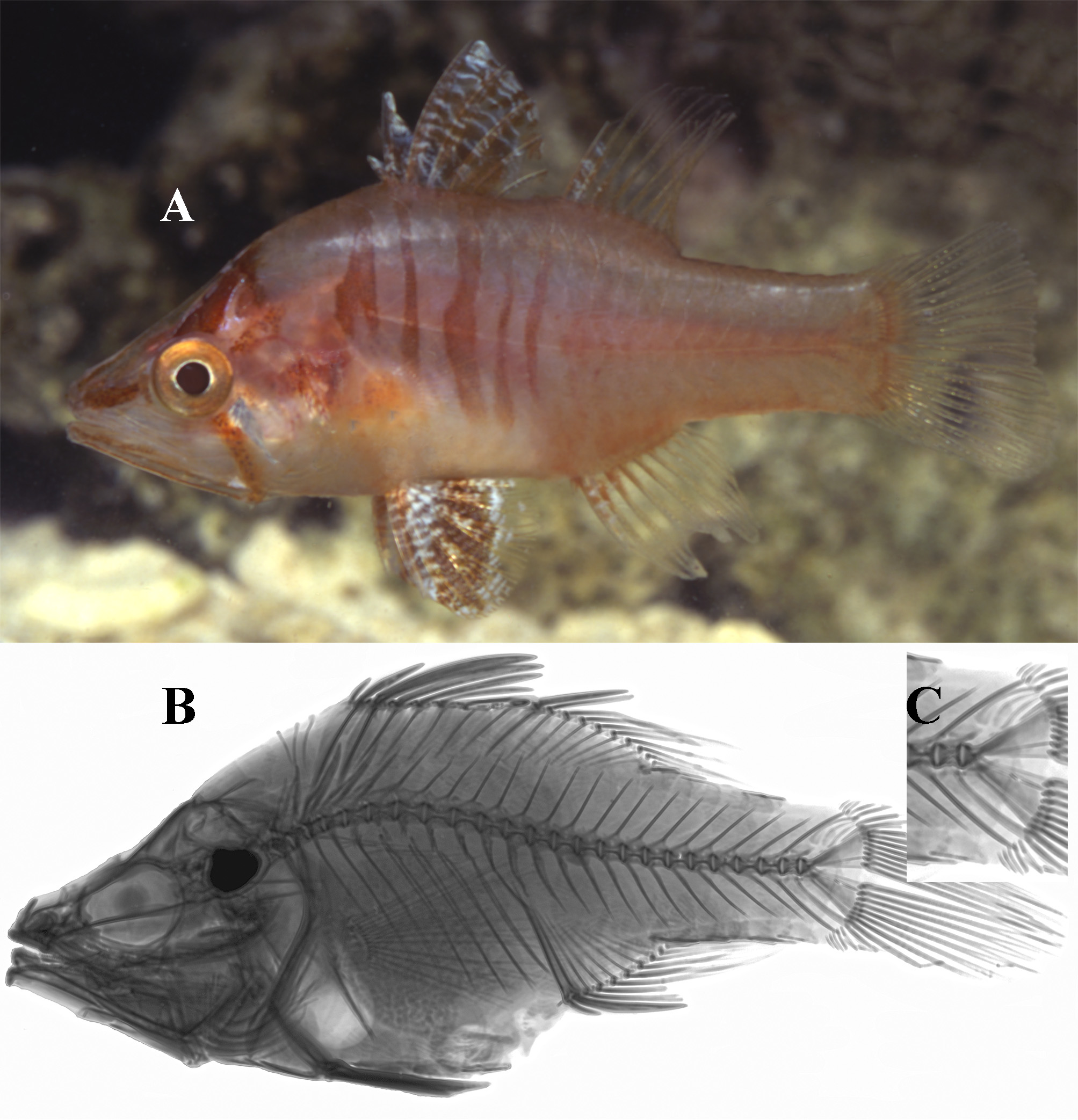