Differential diagnosis. The new species from the cliff coast near Algeciras ( Spain: Cádiz) belongs—from a morphological and molecular perspective—to the species complex of Dichromacalles diocletianus   (cf. Germar, 1817) and is compared with the lectotype of D. diocletianus   (coll. Martin-Luther-Universität Halle-Wittenberg) from the type locality near Split ( Croatia):

2. Pronotum with V-shaped, elongated humps and with a narrower and high longitudinal midline keel on the disc ( Fig. 3 View FIGURES 3 – 13 ).

For a comparison with all other species see below: ‘Key to the species of Dichromacalles   ’.

Head & rostrum. Eyes large, ovally rounded towards front and acuminate towards underside of rostrum. Rostrum of males dark brown, short, reaching at most 2 / 3 length of pronotum; length-width ratio of 3.0 (width measured between the insertions of the antennae); closely covered with white and beige scales in front of the base and finely punctured towards apex ( Figs. 3, 4 View FIGURES 3 – 13 ); rostrum of females clearly longer, shiny and even more finely punctured towards the apex ( Fig. 17 View FIGURES 14 – 21 ). The last two antennal segments preceding the club are wider than long, trapezoidal and not clearly separated from the club; the first two segments of the funicular antennomeres are elongated.

Pronotum. Length-width ratio 1.30–1.40; widest directly in front of the base (at the end of the apical quarter of the pronotum) uniformly rounded laterally towards the anterior margin and more strongly rounded towards the base; with a deep depression at the sides directly behind the anterior margin. In lateral view contour-line of pronotum and contour-line of the elytra not forming continuous curve but clearly separated; contour-line of pronotum flattened, towards the base with a high hump. In dorsal view with V-shaped, elongated humps and with a narrower and high midline keel on disc of pronotum ( Figs. 3 View FIGURES 3 – 13 , 17 View FIGURES 14 – 21 ); further smaller humps upon both sides of the pronotum. The vestiture consists of white and beige, slightly transparent scales, which completely disguise the integument. Pronotum with single tiny, raised and short bristles primarily on the humps.

Elytra. Length-width ratio 1.35 (holotype); widest at the end of the first fifth; sides of the obovate elytra more or less parallel only in the anterior part, humeri not prominent; behind the middle acuminate-ovally rounded towards the apex; laterally directly behind the base with a depression. In lateral view the contour-line of elytra flat behind the base, the contour-line of the elytral slope forming an arc towards the apex. The vestiture of the elytra is not rich in contrast and consists – like that of the pronotum – of white and beige, slightly transparent, circular and overlapping scales so that the integument is not visible. Always with a white spot directly behind the base on the first 2 intervals; here on the 2 nd interval (not counting the suture interval) with a small elongated hump; on the anterior half of the elytra with a crescentic fascia. The most extensive white spots are located between the apex and the middle of the elytra, forming a broad fascia poor in contrast. Striae broader than the intervals, with rounded, deep and vast punctures. Bristles on the suture interval and on the intervals at most 3– 4 x longer than wide, forming sometimes small tufts, which have big gaps between them (distances between tufts 3– 5 x the length of a bristle).

Legs. Short; the apices of the fore femora reach the fore margin of the pronotum, the hind femora clearly not reaching the elytral apex. Legs completely covered with predominantly beige, overlapping scales and some white and raised scales which are 3– 4 x as long as wide on the tibiae.

Etymology. The species name refers to the city of Algeciras in the south of Spain (Prov. Cádiz), from where the type series originates.

Ecology. The specimens of the types series were found under the rosette leaves of Carduus pycnocephalus   , the host plant of the new species.

Distribution. This species is so far only known from the coast between La Línea and Barbate on the southern tip of Spain; see map Fig. 11. View FIGURES 3 – 13 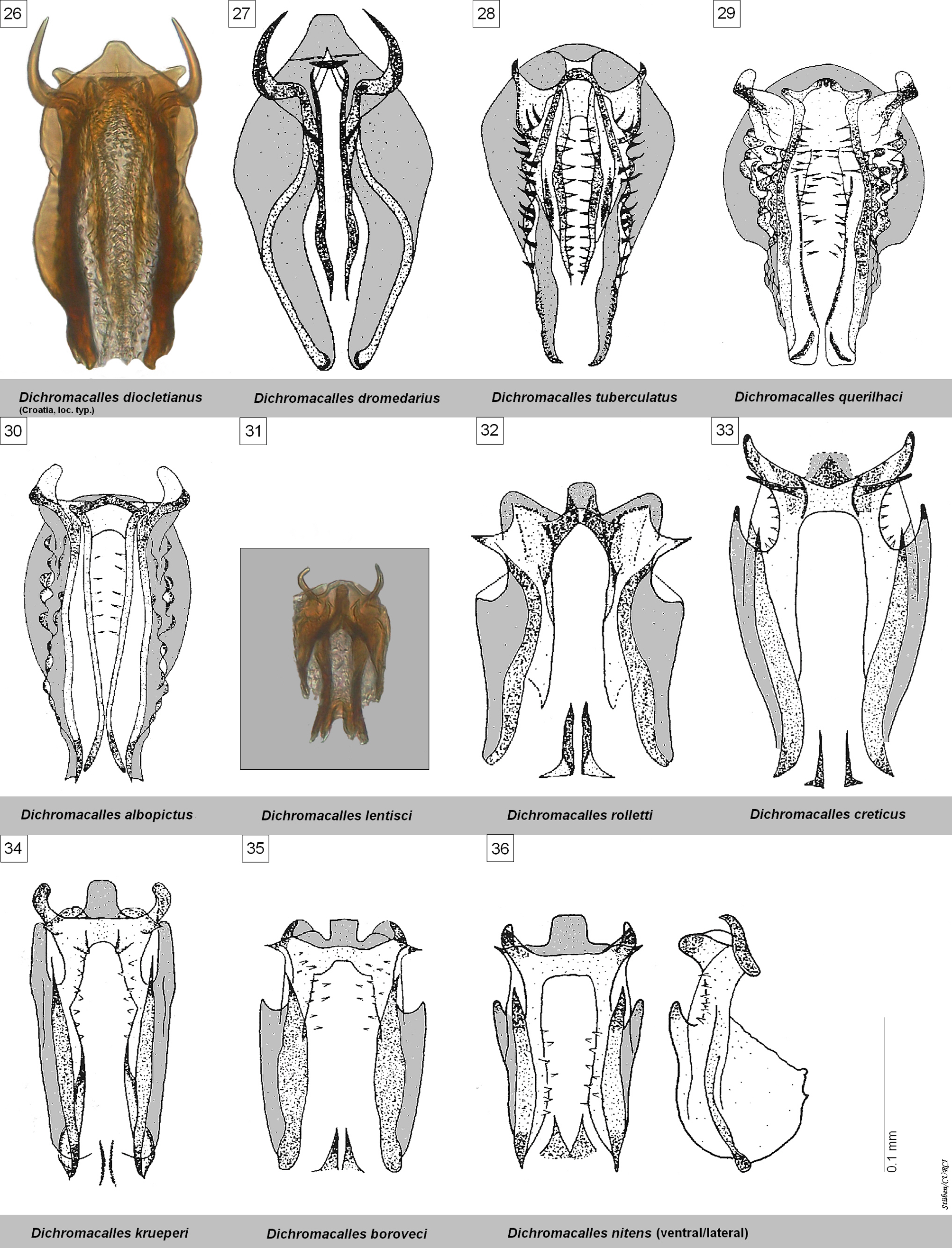