Diagnosis. Dalopius mississippiensis fits Brown’s (1934) cognatus-group of Dalopius by having the phallobase at least half the total length of the aedeagus, truncate elytral apices, and pale humeral maculae on the elytra. It can be distinguished from the other members of this group by the characteristics of the male aedeagus, especially with regards to the shape of the parameres.

Head as in other members of the genus. Antennae extending approximately two segments beyond apex of pronotal hind angles; antennomere III short, slightly longer than II, combined with II subequal to IV.

Variation. A second specimen is 7.0 mm in length and with the reddish humeral macula slightly longer.

Distribution. Currently known only from the type locality in Monroe County, Mississippi.

Other material. Paratype, 1, male, with same data as holotype, deposited in the MEM, Starkville, MS.

Etymology. This species is named for the state of Mississippi where it was collected. This is currently the only species of Dalopius recorded from Mississippi.

Discussion. The placement of Dalopius mississippiensis falls in Brown’s (1934) cognatus-group, supported by the long phallobase, truncate elytral apices, and pale elytral maculae. Based on the lack of emargination at the apex of the paramere, and relative lengths of antennomeres II-IV, this species keys to D. virginicus Brown (1934) . It can be separated from that species by the angulate the apices of the parameres. Externally, D. mississippiensis is largely indistinguishable from other members of the cognatus-group, other than being slightly paler in color. The length of the humeral macula is slightly longer in the secondary specimen than in the holotype, but this trait varies in other members of the cognatus-group.

This represents the southernmost type locality for a Dalopius species in the eastern U.S.A. The town of Hamilton, MS is in the Fall Line Hills subregion of the Southeastern Plains. This is a very rugged terrain drained by tributaries of the Tombigbee and Tennessee rivers. The steep, dissected hills have narrow ridgetops and narrow valleys. The land cover is dominated by oak-hickory-pine forests with 400–700 ft of relief, and includes the highest point in Mississippi ( Chapman et al. 2004). Most other records for Dalopius species in the southeast are in the Blue Ridge and Southwestern Appalachians in eastern Tennessee, North Carolina, South Carolina, and northern Georgia and Alabama. The Southeastern Plains may seem like an unusual place to find Dalopius , but the high, narrow ridgetops and valleys of the Fall Line Hills subregion may allow for relict distributions of otherwise boreal elaterid groups. 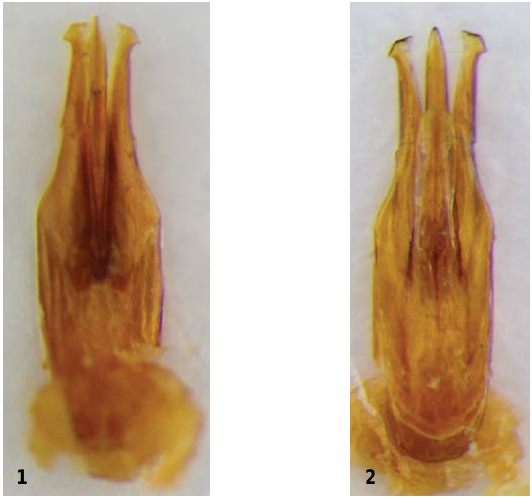