The mainly black and white coloured animals (with orange markings on legs and pronotum) have a distinctive threatening display ( Fig. 1View FIGURE 1 B). They open the elevated wings to some extent, go down with the head towards the ground and bulge the brightly orange skin of the neck as it is done also by disturbed Acripeza reticulata ( Rentz 2010)  . Possibly they are imitating a wasp or another Hymenopteran (see the wasp-imitating phaneropterine Aganacris  for a similar wing coloration; Nickle 2012). This idea is supported by the black antennae, marked with white rings only in large intervals. However, even the nymphs present orange and black colours ( Fig. 1View FIGURE 1 C), so that an own chemical defence should not be completely excluded.

Song: In the field and in the laboratory two different types of song could be heard. The short song (about 0.5–2 s; Fig. 6View FIGURE 6) was heard quite often, while the complicated long song (8–28 s; 4 complete recordings) was presented only in much larger intervals.

At the beginning of the short song an animal typically sings microsyllables by opening the tegmina silently and producing few impulses only during a part of the closing movement. After a variable number of these elements, increasing in amplitude, the animal switches to macrosyllables and during the whole closing movement impulses are produced ( Fig. 7View FIGURE 7 A). The syllable repetition rate decreases only very slightly from 23 to 21 Hz (T> 29 ºC). Mostly there are one or a few intermediate syllables in between. At the end of a short song sometimes microsyllabes are added or even another series of micro- and macrosyllables (observed once in a field recording). A long song ( Fig. 2View FIGURE 2) starts with macrosyllables of low amplitude and short duration, but they become quickly longer and louder and remain so for several (up to many) seconds (syllable repetition rate 23 Hz). After some time the animal switches ( Fig. 6View FIGURE 6, 7View FIGURE 7 B) to another syllable type which looks like a combination of a micro- and a macrosyllable. After a series of impulses one separate impulse (8–10 ms interval) is following. These syllables are repeated for about 2 to 4 s at a repetition rate of 37 Hz. After some intermediate syllables ( Fig. 7View FIGURE 7 C) the final syllable sequence (0.5 to 1 s duration) is enclosed where very loud isolated impulses are produced, similarly as in the microsyllables, but with a much higher intensity, higher movement amplitude and higher repetition rate (55 Hz).

The stridulatory file did not show any irregularities. 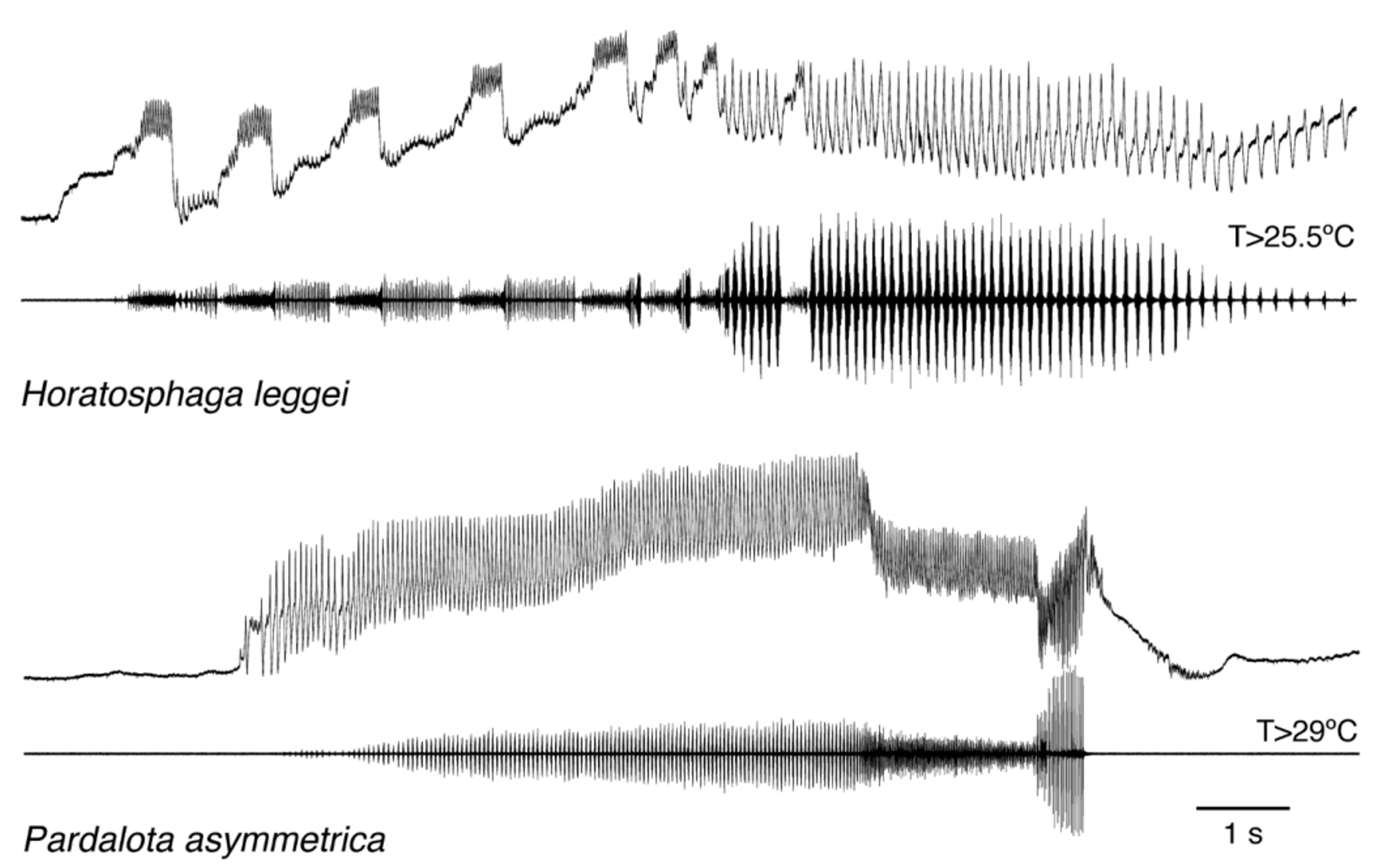 FIGURE 2. Oscillograms of stridulatory movements and song [synchronous registration of left tegmen movement (upward deflection represents opening, downward closing) and sound; 15 s sequence]. In the first half of the recording of H. leggei, the stridulatory movement is superimposed by a slight body movement, mimicking a continously increasing opening of the tegmina. 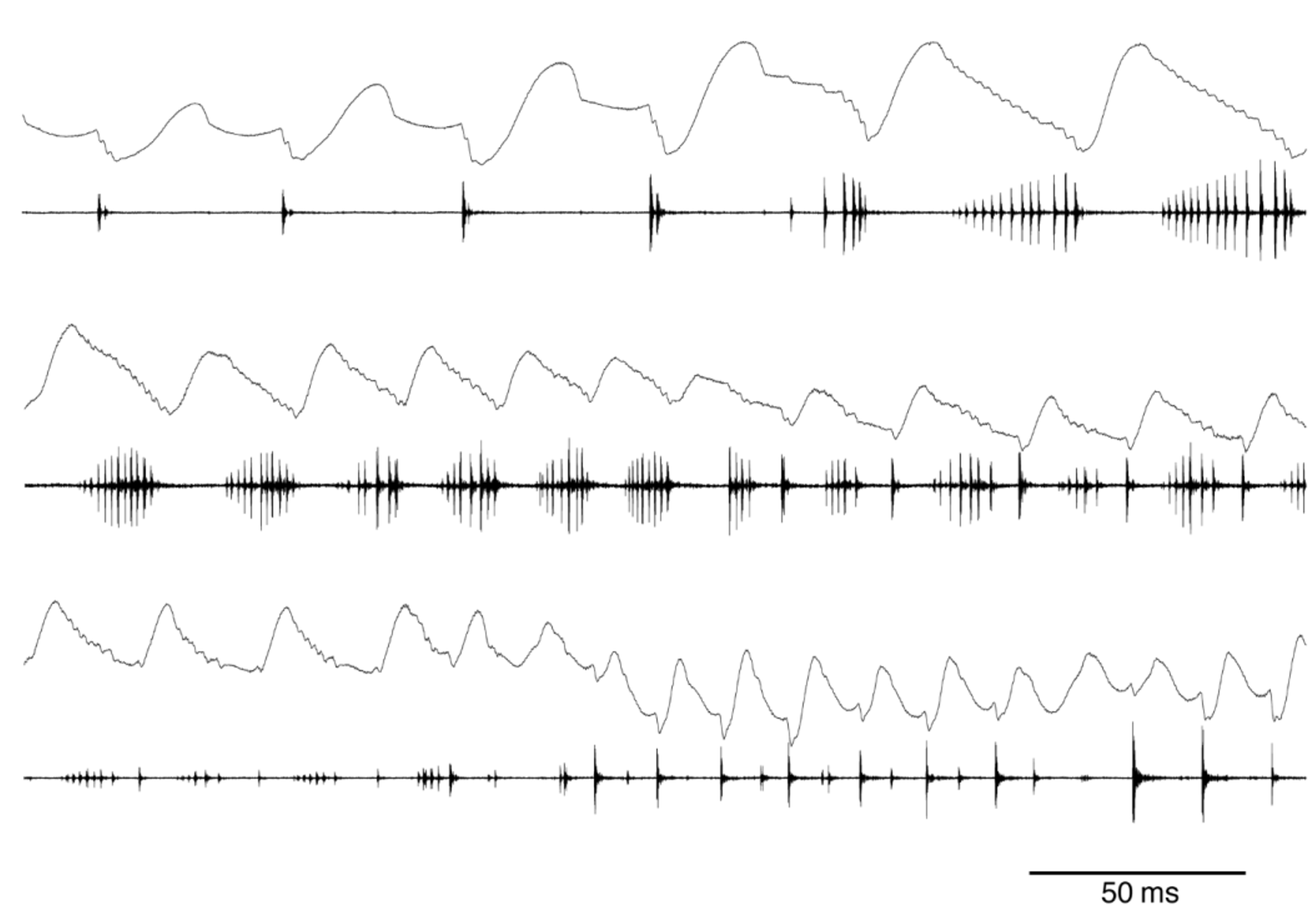