Shrubs or small trees, usually 1-6 m tall, armed with curved deflexed prickles (except Caesalpinia nipensis which is unarmed), these either in pairs at the base of leaves, or scattered along the shoots (or both), or sometimes on woody protuberances at the base of trunks and stems; young shoots terete, glabrous and eglandular. Stipules not seen. Leaves alternate, bipinnate, c. 4-30 cm long, ending with a pair of pinnae, unarmed, or sometimes with a pair of prickles at the insertion of the pinnae on the leaf rachis, sometimes also at the insertions of the leaflets on the pinna rachis; pinnae opposite, in (1-) 2-6 pairs per leaf; leaflets alternate to opposite, in 3-13 pairs per pinna, short-petiolulate, blades suborbicular, obovate or elliptic, apex mucronate, rounded or emarginate, base cuneiform, rounded or oblique; main vein centric, secondary veins reticulate. Inflorescence a terminal or axillary raceme or panicle of pedicellate, bisexual flowers, c. 5-37 cm long, unarmed; bracts lanceolate or ovate, apex acute to acuminate, caducous. Flowers zygomorphic, c. 13-25 mm long; calyx comprising a hypanthium with 5 sepals, that are each c. 7-17 mm long, glabrous to occasionally finely puberulous, always eglandular, the lower sepal strongly cucullate and covering the other 4 sepals in bud, all sepals caducous, but hypanthium persistent as a free ring around the pedicel as the fruit matures; petals 5, variable in colour (yellow, white, red, orange, or green; certain horticultural varieties are also pink), the corolla also variable in shape (related to different pollination systems: bees, butterflies, birds and bats); stamens 10, free, c. 10-65 mm long, the filaments pubescent, eglandular; ovary glabrous and eglandular. Fruit a wingless, unarmed, coriaceous, glabrous, eglandular, oblong-elliptic, or linear pod, with a marcescent style forming an acute apex, c. 34-120 × 7-26 mm, explosively dehiscent, with twisting valves, 3-7-seeded. Seeds laterally compressed, obovate, up to 10 mm in diameter.

Caesalpinia , as re-circumscribed here, is reduced to around nine species (a detailed taxonomic revision is needed to properly delimit species), and is now restricted to the Neotropics (apart from the pantropically cultivated Caesalpinia pulcherrima ). All the Old World species previously included in Caesalpinia s.s. sensu Lewis (2005) are here transferred to other genera. One species ( Caesalpinia cassioides ) occurs in the northern Andes from Peru to Colombia, one ( Caesalpinia pulcherrima ) is likely native in Guatemala and the state of Sonora in Mexico), two occur in the Caribbean (one, Caesalpinia nipensis , is endemic to Cuba, the other widely distributed and possibly divisible into six separate species, all of which are listed below). Caesalpinia pulcherrima is a widely cultivated ornamental throughout the tropics. It includes red, orange, pink, and pure yellow-flowered forms and cultivated specimens are usually unarmed and lack bristles (unlike wild specimens which are armed and bristly). 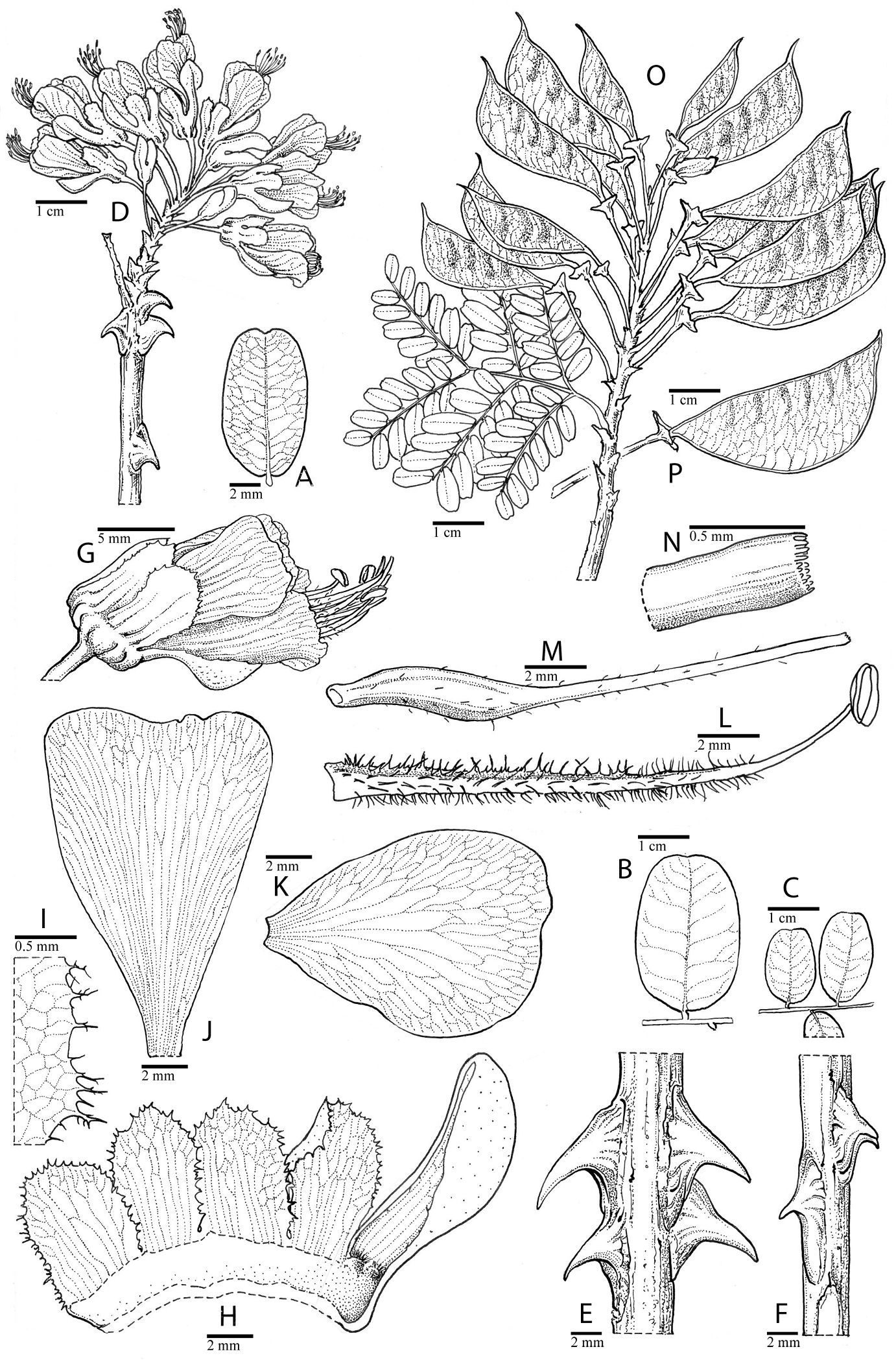 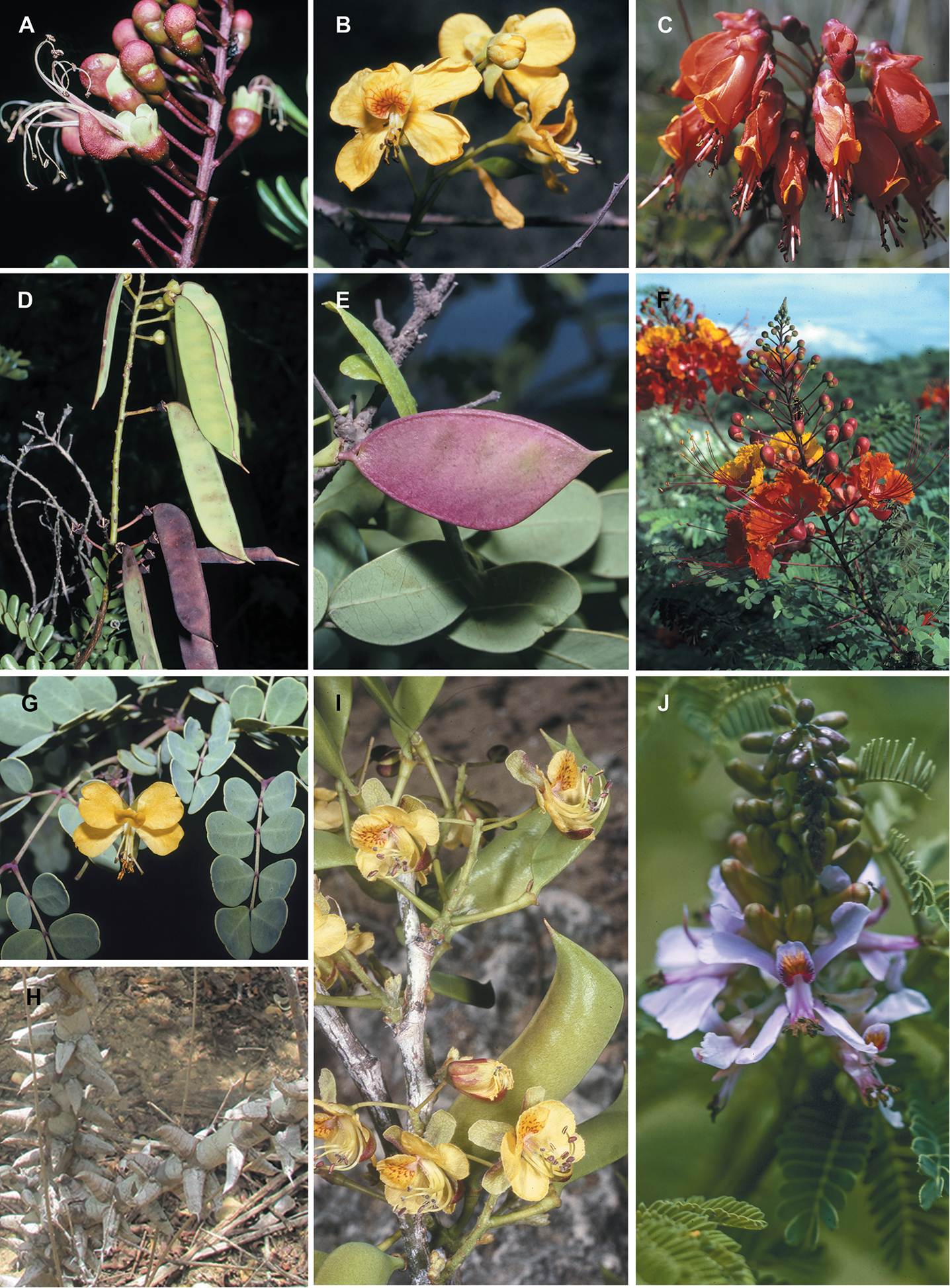