Large species (5.7 mm length in slide-mounted specimens). Body suboval, dorsally smooth. Dorsal bristles long, more dense on head, antennal segments I and II ( Fig. 2View FIGURES 2 – 7), sides of pronotum (continued towards the posterior margin) ( Figs. 3–4View FIGURES 2 – 7), hemelytral pads, and at apical half of each abdominal segment; these intermixed with very short setae. Lb 2 distinguishable by its greater length and its more internal base ( Figs. 3– 4View FIGURES 2 – 7). Venter with more sparse and shorter bristles, with a long hair at the latero-apical angle of each ventrite. Legs with long and thick bristles ( Fig. 6View FIGURES 2 – 7). Females with a very small and reduced apical tuft of hairs on front tibiae and absent in middle tibiae; males with apical tufts of hairs in front and middle tibiae.

Clypeus strongly widened, subquadrangular, more than 1 / 2 as wide as interocular space, with many long setae ( Fig. 2View FIGURES 2 – 7). Head disk rugose, with a few bristles on each side near eyes and at middle. Eyes small, separated from the anterior margin of pronotum by a distance subequal to their width ( Fig. 2View FIGURES 2 – 7). Antennae about equal to width of head; second segment longest, greater than interocular space (Table 1, Fig. 2View FIGURES 2 – 7), I and II thick, and III and IV slender, these ones slightly shorter than segment II and subequal among them. Rostrum reaching middle of front coxae; first and third segments subequal, second slightly shorter and wider.

Etimology. The generic name refers to the Psittacidae  genus Cyanoliseus  related to Cimex  , the type-genus of the family. The gender is masculine.

Taxonomic discussion. The most distinctive characters of Cyanolicimex were summarized in the generic diagnosis. In Cyanolicimex, A 2> pIS> aIS is clearly longer than the A 2 in Psitticimex ( Fig. 2View FIGURES 2 – 7 and Fig. 16View FIGURES 16 – 20 respectively). Affinities of Cyanolicimex are unclear, because some characters are shared with other South American genera: the absence of the apical tufts of hair in the middle tibia of the females ( Ornithocoris  ); A 2> aIS (Psitticimex); the maximum width of the pronotum in the middle of its length (Acanthocrios and Psitticimex); the shape of the spermalege, extended anteriorly (Psitticimex); and one species of Psittacidae  as a host (Psitticimex). On the other hand, Cyanolicimex shows some similarities with Hesperocymex List, 1925 from the Nearctic Region. In this latter genus, the pronotum has very long bristles at the lateral margins, the posterolateral angles of the pronotum are rounded, and the apical tufts of hair are absent in the front and middle tibiae of the females ( Usinger 1966). Hesperocymex was considered as a more derived genus in the Nearctic Region ( Ueshima 1966), and Cyanolicimex seems to be its counterpart in the Neotropical Region.

The phylogeny of the Haematosiphoninae  , first proposed by Usinger (1966), and later modified by Di Iorio et al. (2008) and Poggio et al. (2009), should be modified again with the tentative incorporation of Cyanolicimex as the sister genus of Psitticimex ( Fig. 8View FIGURE 8). A further cytogenetic study of C. patagonicus  will confirm if its chromosome number and sexual mechanism are similar to Psitticimex, as is suggested by its position in the phylogenetic tree ( Fig. 8View FIGURE 8). FIGURE 8. Phylogeny of the Haematosiphoninae, with the incorporation of Cyanolicimex as the sister genus of Psitticimex. 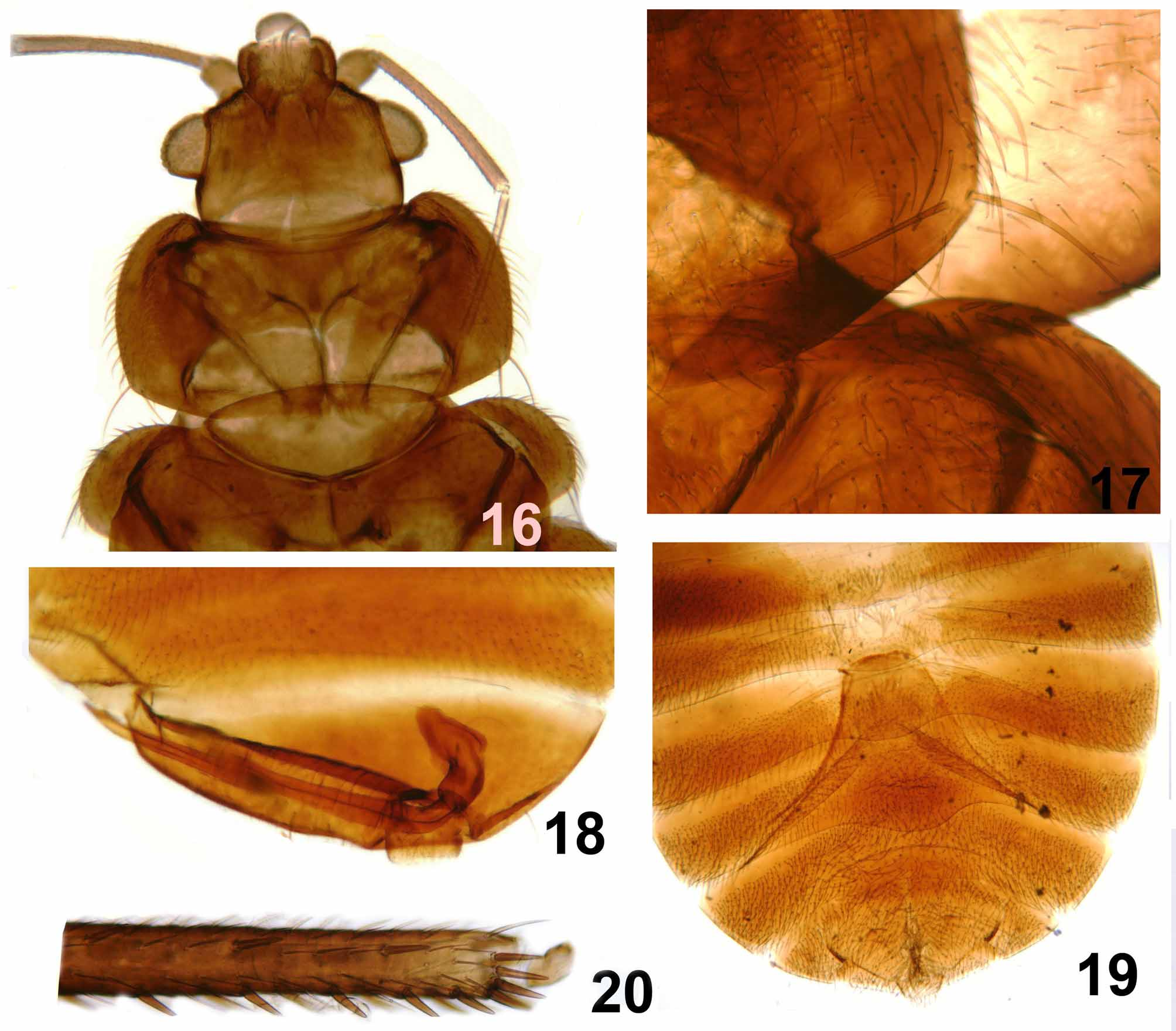