Shell vitreous or with wide brownish spiral bands, conical with an obtuse apex, reaching about 4.5 mm long and 1.5 mm wide, about eight whorls, aperture broad. Protoconch vitreous, subcylindrical, about two whorls, 330 µm in width, smooth, transition to teleo conch marked by a subtle incremental scar. Teleoconch with about six whorls of sinuous outline, with convexity more attenuated on the lower region of each whorl; suture deep, well impressed, sloping; subsutural zone occupying about 1/5 of the whorl height; surface glossy and smooth, except for microsculpture of axial lines and incremental scars; incremental scars well developed, appearing in intervals of about 0.5 whorl. Last whorl occupying about 50% of the shell length; base slightly abrupt in outline. Aperture high, occupying about 70% of the body whorl length, wide, pear-shaped, expanded laterally, acute posteriorly, rounded and spread anteriorly; outer lip thin, very sinuous, orthocline, strongly retracted near the suture, after strongly protruding, and retracted in the distal region, maximum projection at the middle of the outer lip height; inner lip sinuous, sloping and well demarcated. Umbilical fissure present. Shell whitish or vitreous, usually with a wide brownish spiral band along the teleoconch.

Dall and Simpson (1901) referred to five specimens in the original description without the selection of a holotype and, thus, all shells are syntypes. We select the shell of USNM 160202 ( Fig. 4A View Figure 4 ) as the lectotype.

The material from the north coast of Brazil fits perfectly with the lectotype of Eu. patula in shape and reaches a similar size (lectotype USNM 160202, 9 whorls, 4.53 mm long vs MCZ 34479, 8 whorls, 3.99 mm long). The record of Eu. patula from the north coast of Brazil represents the southernmost record of this species and is more than 2,500 km from the type locality and about 1,800 km from the recent record from Guadeloupe ( Lamy and Pointier 2017). This species is currently known only by empty shells.

As commented above, one shell recorded by Dall (1927: 67) is actually Eu. microsculpturata and the remaining shells found cannot be identified with certainty due to their poor condition. We did not find more material to reassess the record of Eu. patula by Dall (1927).

Parker and Curray (1956) recorded Eu. patula (as " Melanella patula ") from calcareous banks off Texas and Louisiana, USA, in a depth of about 55 m, in a checklist of species without illustrations. Odé (1989) recorded Eu. patula (as " Sabinella patula ") from Texas also with no illustrations. The source of material of these records could not be traced in malacological collections and the presence of this species in the Gulf of Mexico is considered dubious.

Eulimacrostoma patula differ from the congeners mainly by the presence of an umbilical fissure and by the more truncated base. 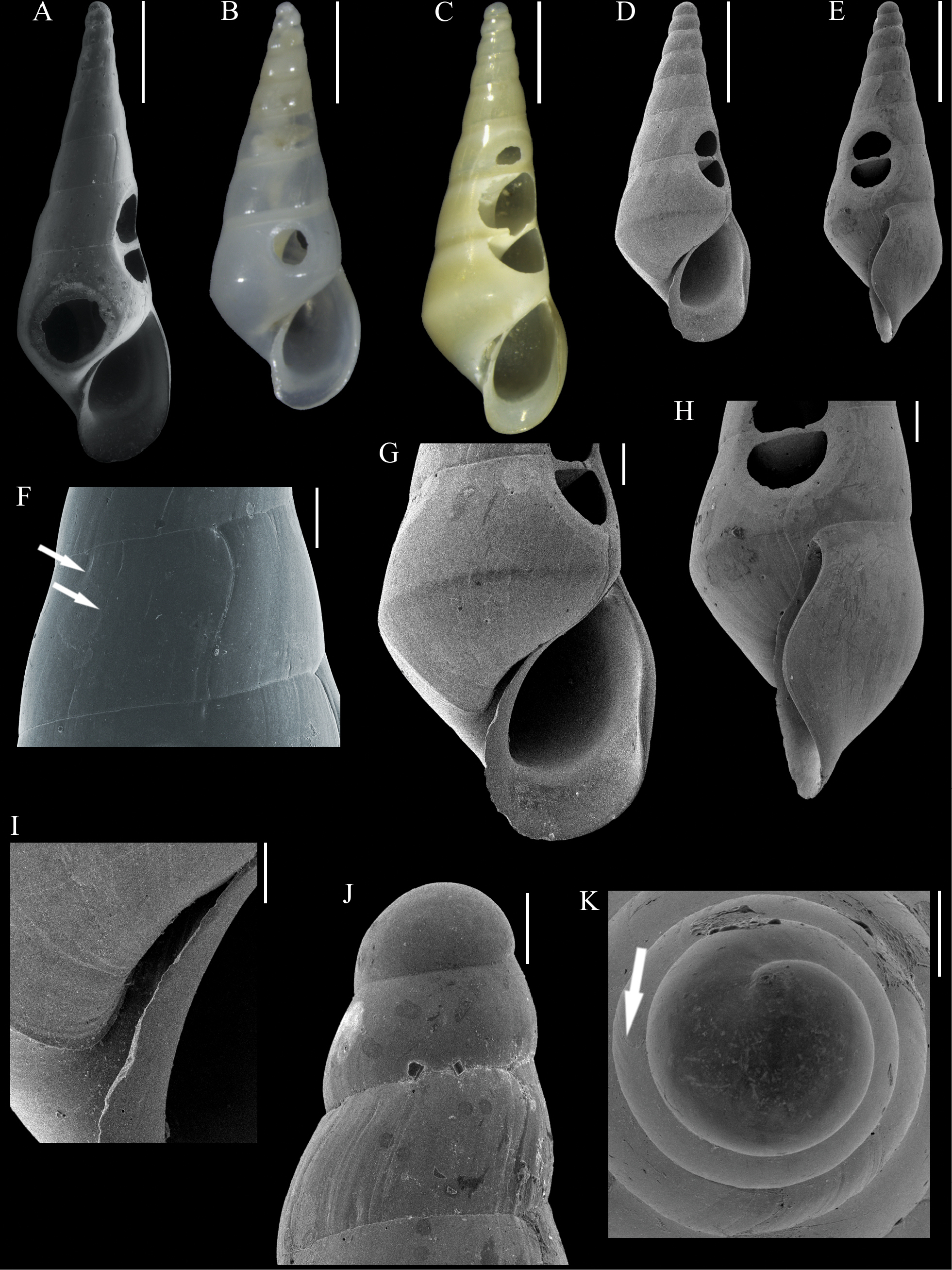