When Alcock (1900) described Conchoecetes andamanicus  , he said that he had “three small specimens”. None of them were designated as the holotype, so all three specimens are the syntypes (see ICZN 1999: Art. 72.1.1). Later Alcock (1901) gave more details about one of these specimens, the largest male “7.0 × 7.5 mm,” from the Andaman Islands, registered in the Indian Museum ( ZSI) as “2859/7 Port Blair, coll. G.H. Booley”. Examination of these specimens by Santanu Mitra, resulted in the following data: largest male, 8.0 × 9.2 mm, smaller male, 7.0 × 8.6 mm, and a damaged female, 5.8 × 5.6 mm, and there is no label in the container indicating they are types. Although the present measurements do not agree exactly with Alcock we have no doubt that they all refer to the same material. When size estimates involve pliable material with or without marginal structures included there will always be imprecision. We designate the largest male 8.0 × 9.2 mm as the lectotype and the two others become paralectotypes. The photograph provided herein is of the male paralectotype ( Fig. 3BView FIGURE 3).

Remarks. Alcock (1900) was unsure of the status of three small specimens amongst the collection from the Andaman Islands, so cautiously named them Conchoecetes andamanicus  (followed by a question mark), but this species is valid and differs from C. artificiosus  in having no supraorbital tooth, Fig. 3View FIGURE 3 (present in C. artificiosus  , Fig. 2View FIGURE 2); carapace regions weakly marked (deeply marked); anterolateral margins not sculptured (complex with notches); anterolateral and posterolateral teeth only weakly developed (both teeth strongly developed); single large tubercle at base of cheliped fingers (two unequal tubercles). Lewinsohn (1984: 122, 123) presented a detailed comparison of C. intermedius  with C. andamanicus  and C. artificiosus  .

Conchoecetes andamanicus  seems to be one of the smallest species in the genus: the male type specimen is only ~ 8 mm CW ( Table 1). Males examined here, CW 5–6 mm, appear to have well developed mature gonopods and the female has a mature sized pleon suggesting that this species matures at a very small size, around 5 mm CW. Laurie (1906) reported a male CW = 10.25 mm from the Pearl Banks (the same specimen was examined herein), which seems to be the largest known. We can compare these specimens with the megalopae of Conchoeodromia alcocki  (which may be a synonym of C. artificiosus  , see Guinot & Tavares, 2000) reported by Chopra (1934) viz. 6.2 × 5.2 mm and 5.6 × 4.1 mm) which are bigger than the ovigerous C. andamanicus  crab collected by Ihle (1913). Where known most of the other Conchoecetes  species mature at around three times larger. The exception is Conchoecetes pectenicola  whose type is a small ovigerous female 6.2 × 6.2 mm, but it grows to more than 20 mm CW. 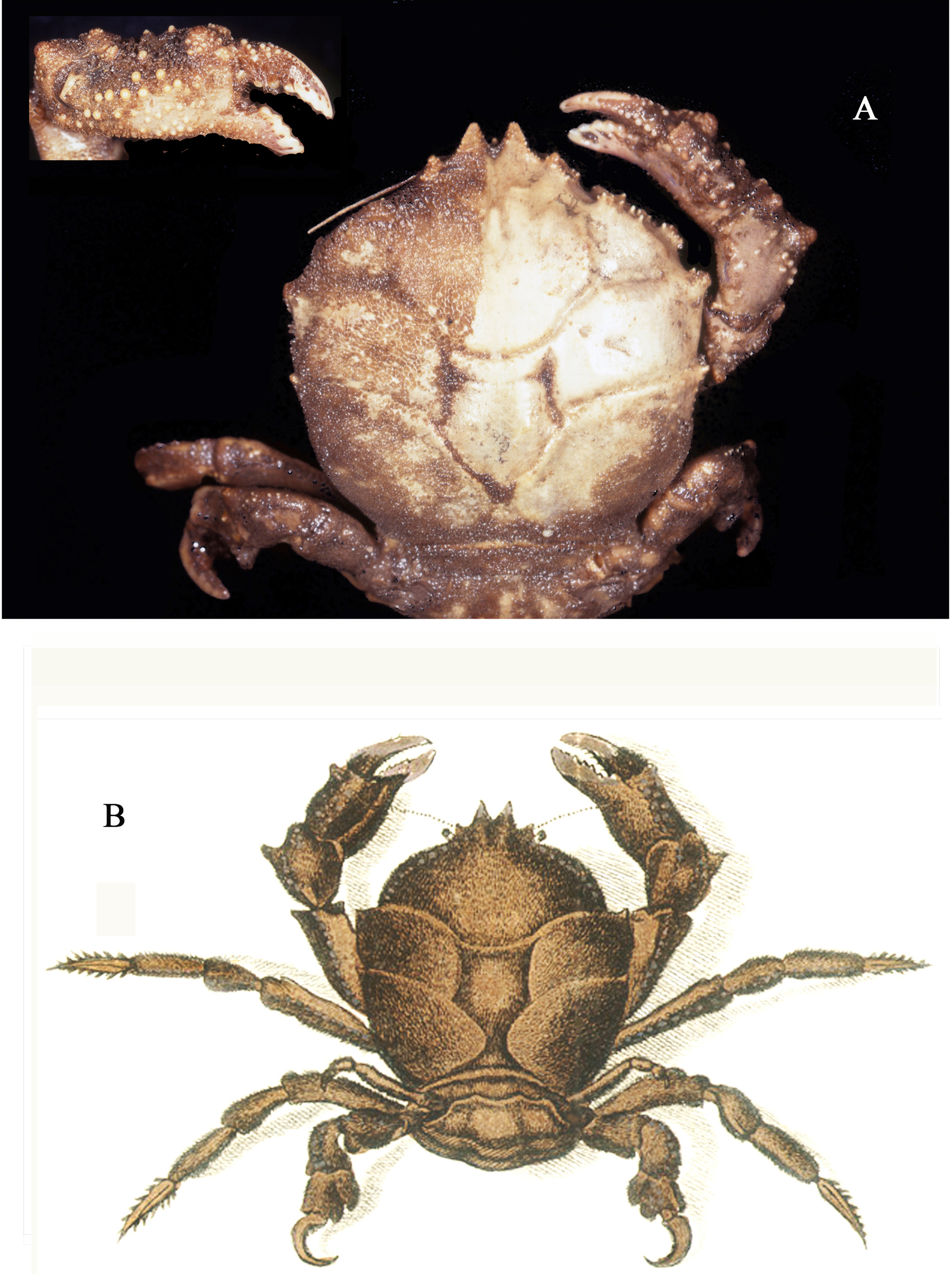 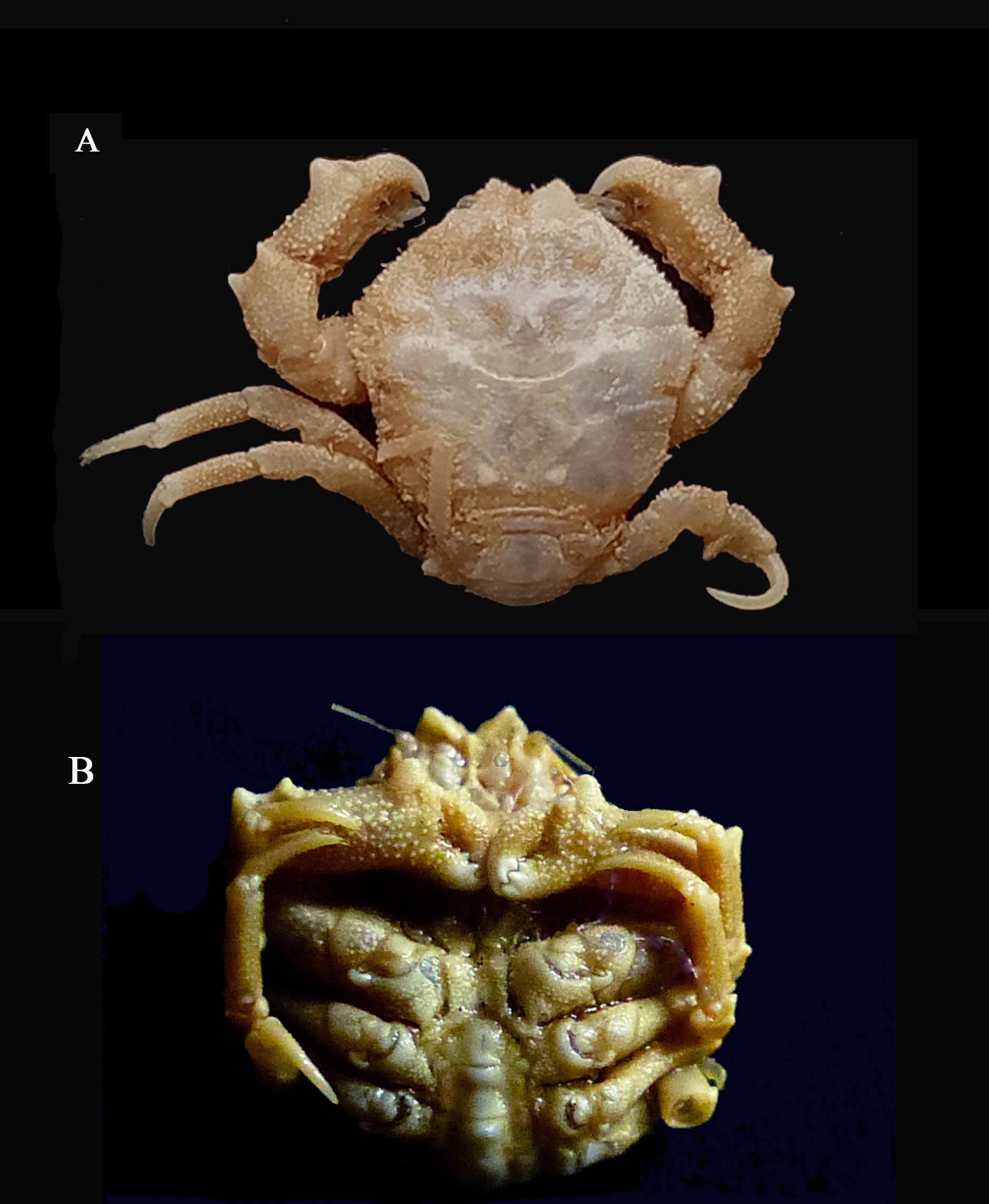