Remarks. The type specimen of this species, from the Sunda Straits, Java, was described as a portunid “ Caphyra pectenicola  ” but Adams (in Belcher 1848: 315) said that it carried a “ Pecten  ” shell in a manner reminiscent of dromiids. Later Wood (1867: 225, unnumbered fig.) illustrated Adams’ specimen in a stylized fashion and suggested that it might be some kind of pinnotherid. Adam’s name “ Caphyra pectenicola  ” remained unused until we recently realized that it was very likely a species of Conchoecetes Stimpson, 1858  . Examination of Adams’ specimen in the dry collection at the NHM confirmed that this was the case. We reproduce here both Woods’ drawing ( Fig. 19BView FIGURE 19) and a photograph of the type specimen ( Fig. 19AView FIGURE 19).

The unusual thing about the type is that it is a small female (6.2 x 6.2 mm) which is ovigerous. Being in a very fragile state and covered in fine setae, the specimen is not amenable to close examination. It is intact except for missing chelipeds. The carapace is flat, sub-pentagonal in shape with cervical and branchial grooves evident under the setae. The anterolateral margin is shorter than the posterolateral margin. The P2 and P3 are long and largely without ornamentation and the dactyli are long and tapering to a sharp tip.

In the ZRC collection there is a female (ZRC 1969.10.4.3) collected off Cape Cambodia, 8º10’N, 104º35’E, 25–30 m, by Raoul Serène, 22 Sep. 1969, which is 12.8 x 12.9 mm and agrees with all of the details that we can discern from the type. In addition it is also ovigerous at a size much smaller than normally found in females of C. atlas  n. sp. with which it has some resemblance. We also have other Southeast Asian material from the Gulf of Thailand and the South China Sea, in the vicinity of Singapore which are the same as Serène’s specimen. We are confident that these specimens can also be identified as Conchoecetes pectenicola  . This species reaches maturity at a small size around 6 mm CW, similar to C. andamanicus  . The species of Conchoecetes  normally mature at around three times this size (see Table 1). 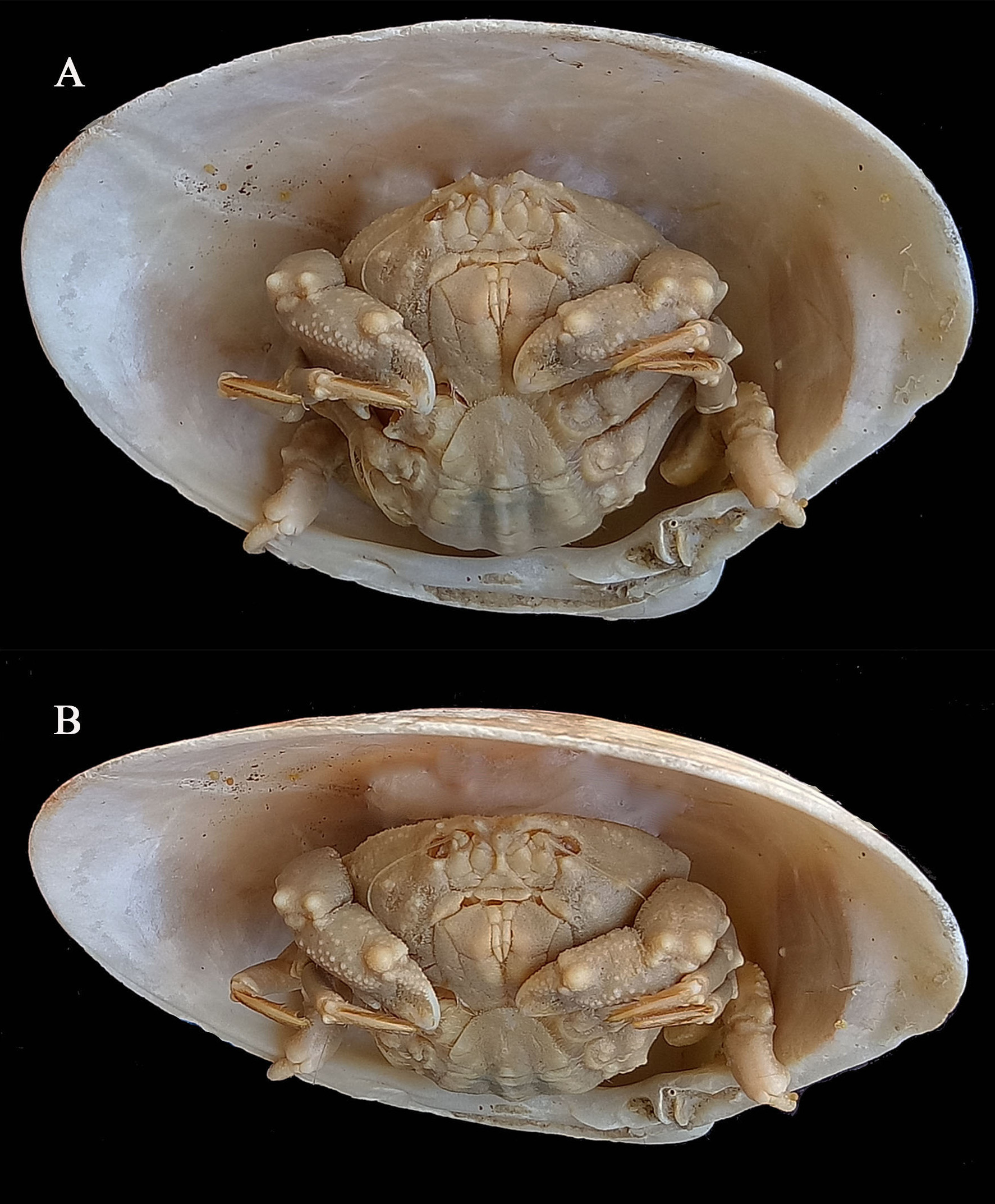