The species is named after Thomas H. Kunz in recognition of his many contributions to the ecology and conservation of bats, and his dedication to the promotion of bat research in Malaysia.

Texas Tech University TTU 108222 (tissue and karyotype TK 152065View Materials; field number VJS 155), adult ♂, body in alcohol, skull extracted, collected and photographed by Robert J. Baker on 6 August 2006 during TTU-UNIMAS Sowell Expedition ( Khan et al., 2008). Although the echolocation calls were not recorded for the holotype and the paratypes described here, all of the type specimens had mtDNA haplotypes consistent with the 142 kHz phonic group. This was further supported through comparisons of the noseleaf morphology with that of individuals for which the echolocation call frequency was known.

This is a small to medium-sized hipposiderid bat in the H. bicolor  group with a forearm length ranging from 38.8 to 45.6 mm (mean = 42.9 mm ± 0.9), tibia length of 17.1 to 20.6 mm (mean = 18.8 mm ± 0.5), and mass varying from 6.0 to 12.0 g (mean = 8.5 g ± 0.9 — Table 2). The dorsal pelage varies from medium or dark brown to bright orange, but is always bicolored with a white base. The ventral pelage ranges from buff or golden, to bright orange ( Fig. 9View FIG). The wing and tail membranes are dark brown, as are the ears. The ears are large (mean = 17.6 mm ± 0.6) and rounded with a bluntly pointed tip. The noseleaf lacks supplementary lateral leaflets and has an internarial septum that is generally triangular in shape (wider at the base — Fig. 9View FIG). The posterior and anterior portions of the nose are dark brown-grey in color, while the central part of the noseleaf is more flesh colored. The tail is long (mean = 28.7 mm ± 1.8), extending the full length of the uropatagium. The fifth metacarpal is about 74% of forearm length and the first phalanx of the third digit is about 53% of third metacarpal. Echolocation call frequency of the CF component ranges from 133.2 to 147.5 kHz, with a mean call frequency of 143.1 ± 2.0 kHz ( Fig. 5View FIG and Table 2).

Hipposideros kunzi  has a small and elongate skull with the greatest length of skull ( GSL) ranging from 17.69 to 19.13 mm (mean = 18.31 ± 0.33 mm). The skull is slightly wider across the zygomata (mean = 9.2 ± 0.2 mm) compared to across the mastoids (mean = 9.2 ± 0.2 mm — Table 3). The distal process of the jugal bone is low and not well defined ( Fig. 6View FIG). The rostrum is well developed with six nasal inflations. The sagittal crest is well developed and is taller more anteriorly. The constriction behind the orbits is well defined and narrower than the rostrum. The upper toothrow is shorter ( CM 3 mean = 6.3 ± 0.1 mm) than the lower ( CM 3 mean = 6.8 ± 0.1 mm). The upper incisor is small and both the upper and lower canines are of moderate size. The upper premolar (P 2) is minute and extruded from the toothrow, while the lower premolar (P 2) is about half the height of the second premolar (P 4). The species is sexually dimorphic with respect to magnitude of certain skull measurements: despite being smaller than females, males have longer and taller skulls and longer canines.

Hipposideros kunzi  is one of several Hipposideros  species described from the Indo-Malayan region, which superficially resemble H. bicolor  and lack supplementary leaflets adjacent to the noseleaf. In peninsular Malaysia and southern Thailand, H. kunzi  most closely resembles, and is easily confused with, both H. bicolor  and H. pomona  . Compared to H. bicolor  , H. kunzi  has a higher echolocation call frequency ( Table 2), is generally smaller in body size ( Table 2), and has a shorter but wider skull ( Table 3 and Fig. 9View FIG). In addition, H. kunzi  has a narrower anterior noseleaf (Holotype: 4.66 mm) that is slightly curved upwards compared to H. bicolor  , which has a wider anterior noseleaf (4.94−5.46 mm, n = 5) that is flattened and square in appearance ( Kingston et al., 2006), lighter in color, and has rudimentary supplementary lateral leaflets ( Fig. 9View FIG). The noseleaf characters, however, are only useful if both species are available for comparison in the field.

Currently, H. kunzi  has only been documented on the Malay Peninsula, between 3°12’N in peninsular Malaysia ( Fig. 1View FIG, site 12) and the Isthmus of Kra at 10°41’N in Southern Thailand (this study; Douangboubpha et al., 2010). Despite extensive sampling, Douangboubpha and colleagues did not capture H. kunzi  in Central or Northern Thailand, suggesting that the northern limit of this species’ range is restricted to the Sundaic biogeographical region, as delimited by the Isthmus of Kra ( Douangboubpha et al., 2010). While we did not sample bats in the southern tip of peninsular Malaysia, we expect that H. kunzi  should occur throughout the peninsula where suitable habitat exists. Lim et al. (2014) reported a positive correlation between the abundance of H. kunzi  (as H. bicolor  -142) and latitude across 15 forest sites in peninsular Malaysia, with few or no captures at sites in the southern third of the Peninsula (which may be attributable to the lack of karst). In Singapore, H. bicolor  (= H. kunzi  ) is considered locally extinct due to habitat loss ( Pottie et al., 2005). Douangboubpha et al. (2010) included Sumatra in the distribution of H. atrox  (= H. kunzi  ), but because of the high level of cryptic diversity within this group it is impossible to determine whether individuals from Sumatra are conspecific with H. kunzi  without genetic data. Based on limited sampling in Borneo ( Fig. 1View FIG), there is currently no evidence that H. kunzi  occurs in Borneo.

In peninsular Malaysia, individuals of H. kunzi  were captured at all sampling sites ( Fig. 1View FIG) and were relatively common and widespread in karst regions, but were also common in some non-karst areas (e.g., Krau Wildlife Reserve). Colonies ranged in size from a few individuals to several hundred and were found in caves, mines, and rock crevices. Colonies of H. kunzi  were almost always found in caves housing other bat species; these included H. cervinus  , H. larvatus  , H. armiger  , Rhinolophus malayanus  , R. stheno  , Myotis siligorensis  , M. ater  , Miniopterus medius  , and Taphozous melanopogon  . Based on captures and wing morphology, H. kunzi  is believed to forage in forested habitats; Douangboupha et al. (2010) suggested that H. kunzi  forages in diverse forest types and may be somewhat tolerant of anthropogenically modified landscapes that retain vegetative structure (e.g., secondary forest, rubber and orchard plantations). Given the species’ distribution across the Malay peninsula into Southern Thailand, widespread occurrence and local abundance, we currently recommend H. kunzi  be evaluated as a species of Least Concern, following IUCN Red List Categories and Criteria v. 3.1 ( IUCN, 2012). Loss and disturbance of caves and foraging habitats would support a higher category of risk.

We and others have noted the high levels of cryptic diversity in Hipposideros  (e.g., Esselstyn et al., 2012; Murray et al., 2012; Foley et al., 2017). We hope that our taxonomic delineation of a new member of the bicolor  species group, H. kunzi  , will motivate further efforts to resolve the taxonomy of remaining cryptic lineages. Such efforts are essential to the conservation of the remarkable diversity that exists within this already speciose genus. FIG. 4. Results of the statistical parsimony analysis for H. kunzi sp. nov. (=H. bicolor-142) recovered two groups, separated by the dashed line (15 steps). Solid lines represent one base pair change. Haplotypes Z and Y are from southern Thailand, haplotypes S, T, U, V, W, and X represent the Perlis group, and all other haplotypes are part of the Malay group. Haplotype A was determined to be the most basal in this analysis FIG. 9. Photographs of H. kunzi sp. nov. (=H. bicolor-142; A, D, and E) and H. bicolor (=H. bicolor-131; B and F), demonstrating overall similarity in appearance, variations in coat color, and differences in nose coloration (insets). Hipposideros cineraceus-B (C) is closely related to H. kunzi genetically, but is easily distinguished based on nose morphology and body size. Photographs are not to scale FIG. 7. Results of a stepwise DFA using 19 skull characters: A — The six different species from peninsular Malaysia were best separated with the first two functions: H. bicolor (|; = H. bicolor-131), H. kunzi sp. nov. (■ = H. bicolor-142), H. pomona (•), H. cineraceus-A (), H. cineraceus-B (£), and H. halophyllus (r). Included is a paratype (TTU 108209) for H. kunzi sp. nov. (X = H. bicolor-142); B — The following ◒ specimens were entered into the resultant DFA to determine if they were conspecific with either H. bicolor or H. kunzi: H bicolor lectotype (6), H. pomona gentilis type (), H. bicolor major type (n), type series of H. javanicus (Ü), H. bicolor erigens paratypes (s), H. bicolor erigens type (q), H. ater amboinensis type (È), and H. halophyllus individual from Thailand (p); C — One or two of the eight skull characters that best separated the six species from Malaysia were removed and the DFA was rerun to incorporated type specimens with incomplete skulls. GSL was removed to include the type specimen of H. macrobullatus (Ο) and the H. pomona type (); D — The type specimen for H. bicolor atrox (u) was missing the dentary, so DL, M1M3, and CDH were removed from the analysis; E — IOW, RW, and M1M3 were removed to include H. bicolor from the Philippines (►) and additional H. bicolor (= H. bicolor-131) from Sarawak (); F — The type specimen for H. pomona sinensis (Ì) was more damaged than any of the other skulls, so a separate stepwise DFA was performed only including available skull characters. Four characters were retained: RW, M3M3, DL, and M M 1 3 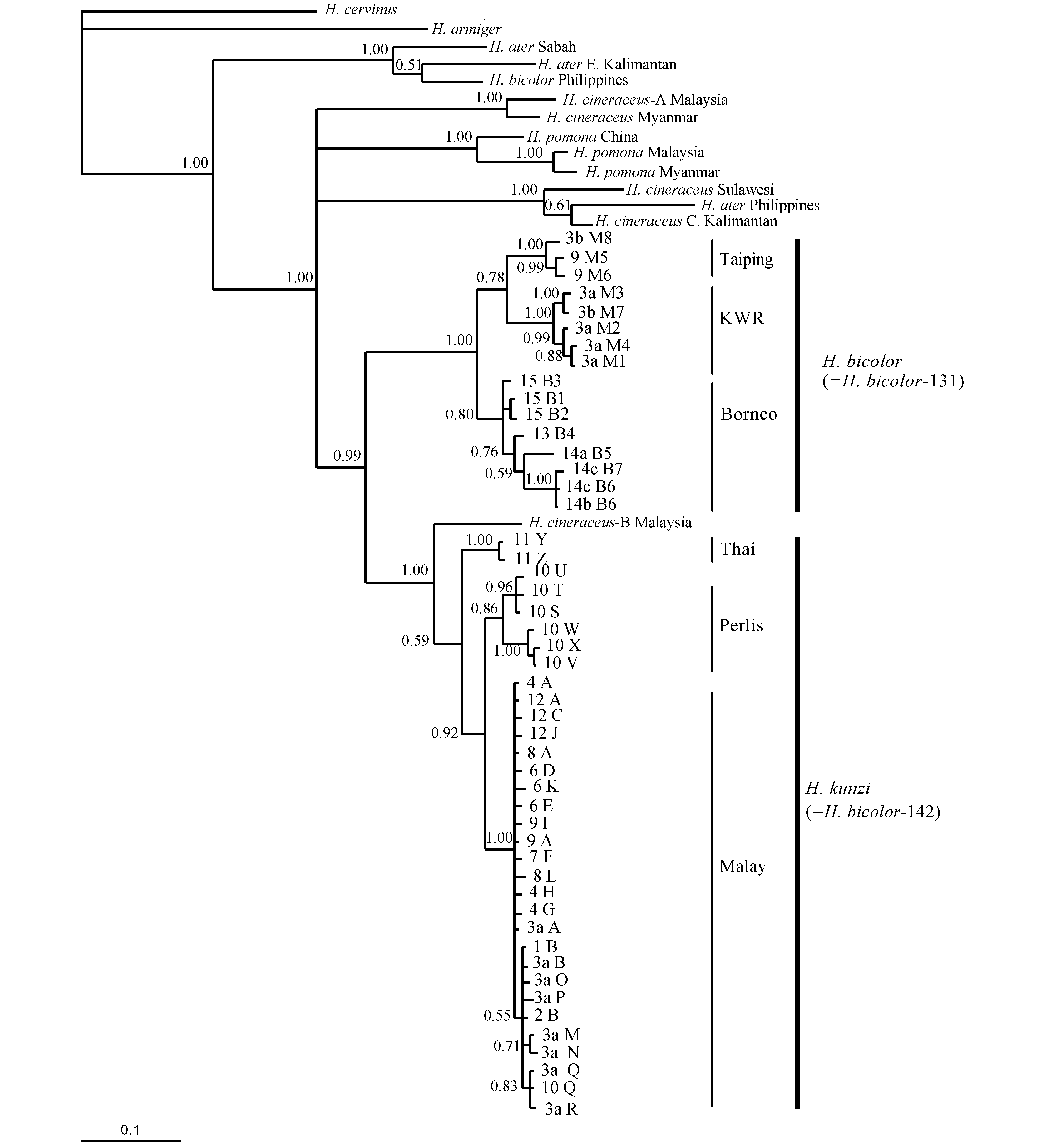 FIG. 2. Phylogram generated from a Bayesian analysis using the GTR+G+I model of nucleotide evolution. Branch lengths are proportional to the number of substitutions as indicated by the scale bar. Tip labels for the different species of H. bicolor include the capture site (Fig. 1) followed by the haplotype (Figs. 3 and 4). Posterior probabilities (pp) are next to the nodes