Gymnopus foliiphilus is the most commonly collected North American taxon in sect. Perforantia . Preliminary field identification attempts to distinguish several taxa with similar basidiomata. Substrate segregates G. androsaceus and G. perforans (conifer needles, usually Picea and/or Abies ), from G. foliiphilus . Geographic distribution is less secure. Both G. androsaceus and G. perforans are found in Europe and temperate North America, while G. foliiphilus seems limited to eastern North America. From all these taxa, a mimic, Marasmius pallidocephalus , is separated from G. androsaceus with difficulty in the field, based almost solely by lack of clamp connections of the former and phylogenetic placement.

Often in collections of G. foliiphilus , evidence of some bleaching of substrate can be detected. This is not dramatic - not to pale off-white - but distinct nonetheless. The phenomenon cannot be compared to M. perforans because fallen needles of Picea / Abies naturally bleach over time.

In G. folliiphilus , stipes are almost always bicolor , upward with some avellaneous to pinkish shade, downward to dark brown and finally black toward the base (note that the very junction of stipe and lamellae is always dark brown). The relative stipe length of these colors varies considerably, with the upward avellaneous shades from only the uppermost 10% to as much as the upper 50%. To some extent, the density and quality of the stipe vesture also varies, with upper surfaces producing shorter, less setoid, hyaline caulocystidia, often with long, slender, hyaline hyphae producing a sparsely silky or wispy appearance (40 ×) rather different from the hispid or barbed appearance of the lower stipe caused by setoid caulocystidia often gathered into synnematous sheaves.

A seductive artifact in microscope mounts of hymenial structures are the subbasidial cells. As is typical, basidioles and basidia are produced in “bouquets” by subbasidial hyphae, which usually are tightly packed but which retain hyphal characteristics. In G. foliiphilus , subbasidial hyphae are catenulate or congestedly lobose. The result are structures which mimic the cheilocystidia of numerous Gymnopus taxa, especially in sect. Vestipedes . In G. foliiphilus (as in G. perforans ), cheilocystidia are difficult to interpret, and when present, are consummately basidiiform.

Traditional generic characters are not consistent in sect. Perforantia and sect. Androsacei . For example, the pileipellis of G. androsaceus resembles a rameales structure of repent but diverticulate hyphae. Such a pileipellis is also present in Marasmiellus , taxa of which seem to belong to several relatively distantly related clades. In Micromphale , a gelatinous layer within the pileus trama can usually be demonstrated (i.e. M. foetidum , etc.), but in Micromphale sect. Perforantia the gelatinous layer is absent, but “replaced” by a thin slime matrix over and within the pileipellis.

Desjardin (pers. comm.) indicated the possibility that Marasmius insititius Fr. (1838. Epicrisis: 386), fruiting on Quercus leaves in Sweden, might be similar to M. foliiphilus . Marasmius insititius has seen a checkered history. Recently, Antonín and Noordeloos (2010) excluded the epithet from Marasmius because: 1) no type specimen exists; 2) Fries’s description is less than explicit; 3) in spite of Fries’s physical location in central Sweden in 1838, a habitat on Quercus leaves might indicate his exposure to the organism in southern Sweden; and 4) Orton (1960): 303) had dismissed the epithet as a later heterotypic synonym of Marasmius calopus . Desjardin (1989) did not include M. insititius in his type specimen studies, presumably based on the above and its extralimital status for Marasmius of the southeastern United States. Svengunnar Ryman (UPS; pers. comm.) indicates that M. insititius is an unknown entity. It is not the purpose of this paper to attempt to exhume M. insititius , especially as this name was not taken up in the Scandinavian mycota by Noordeloos in Funga Nordica ( Knudsen and Vesterholt 2012). 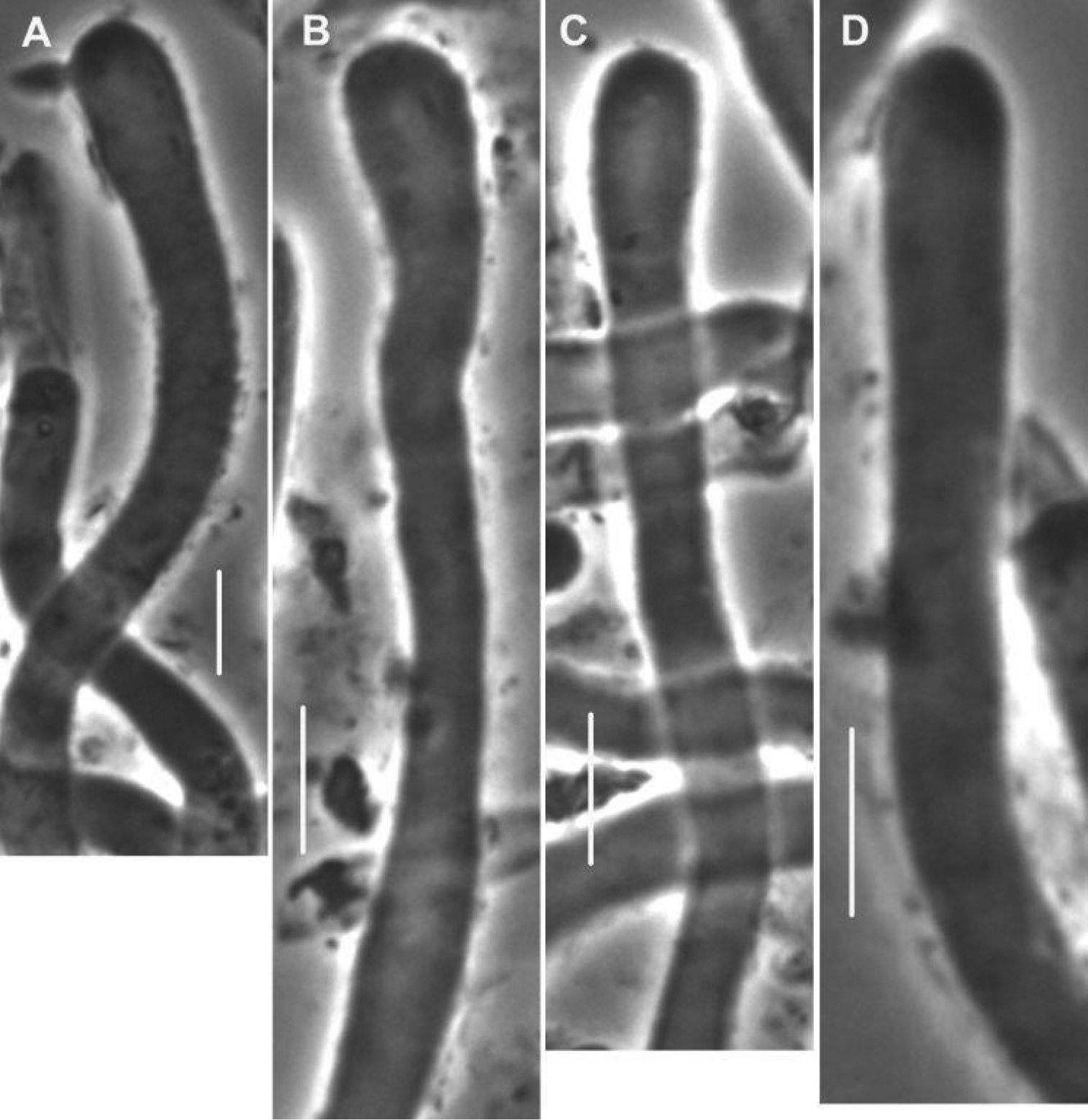 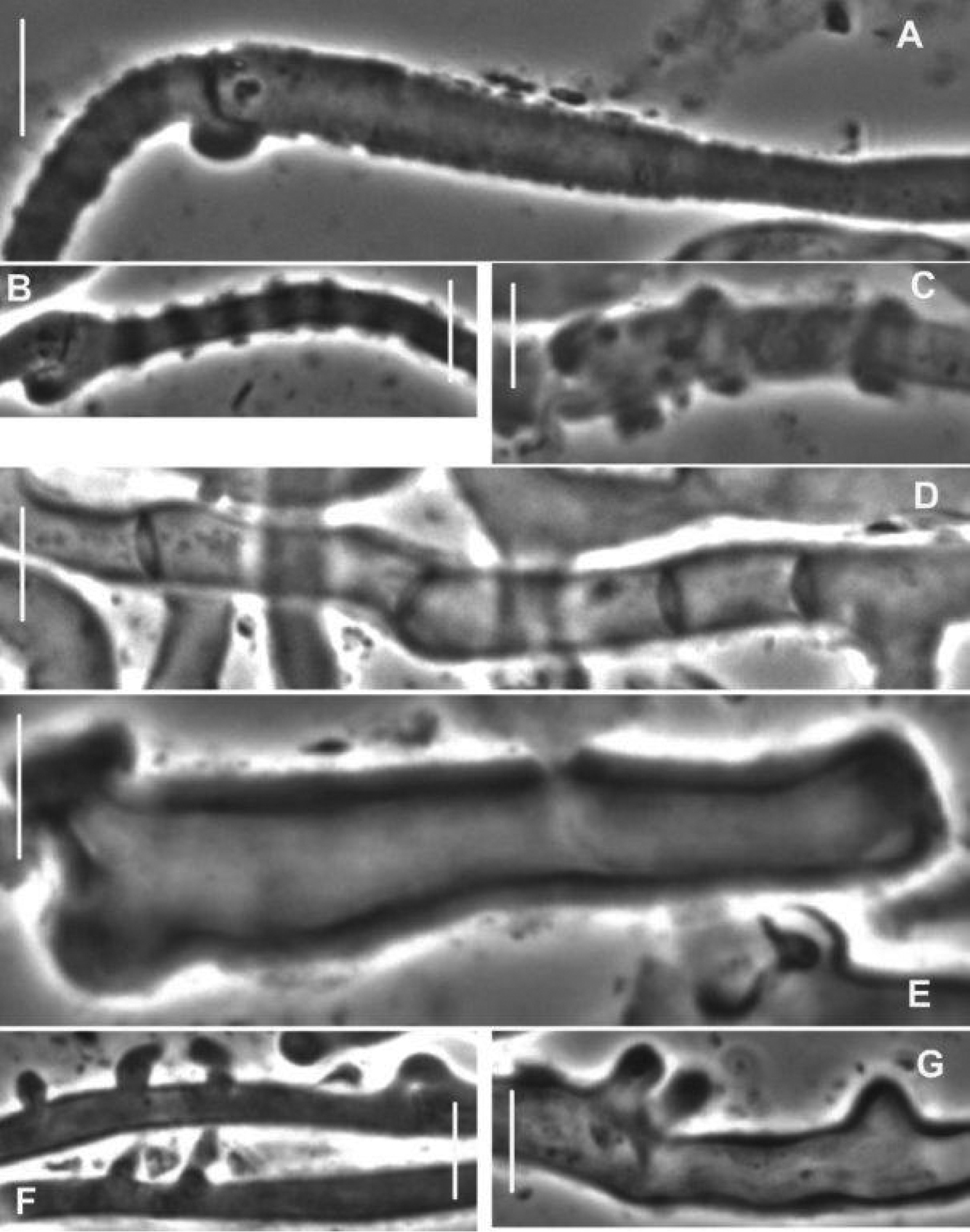 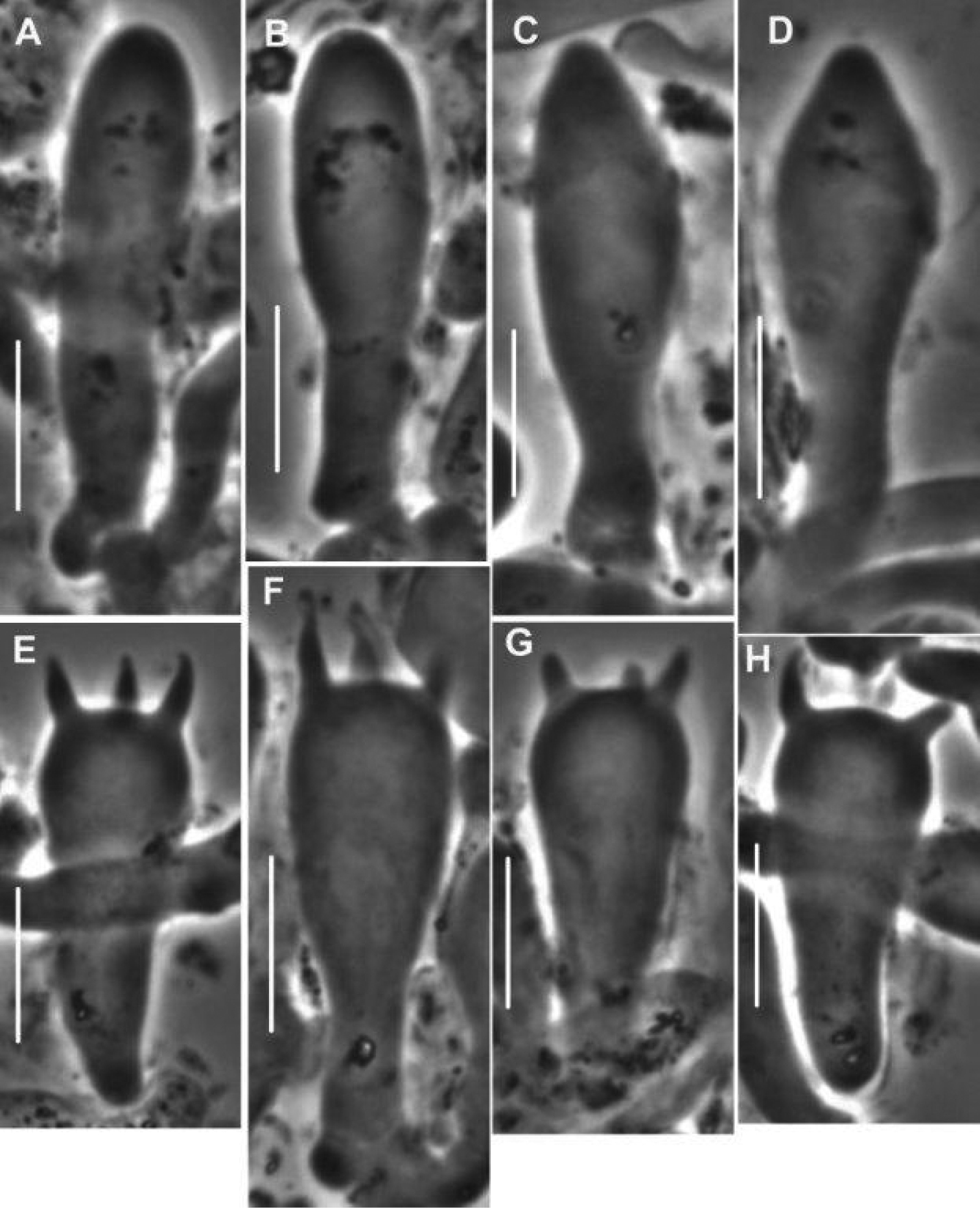 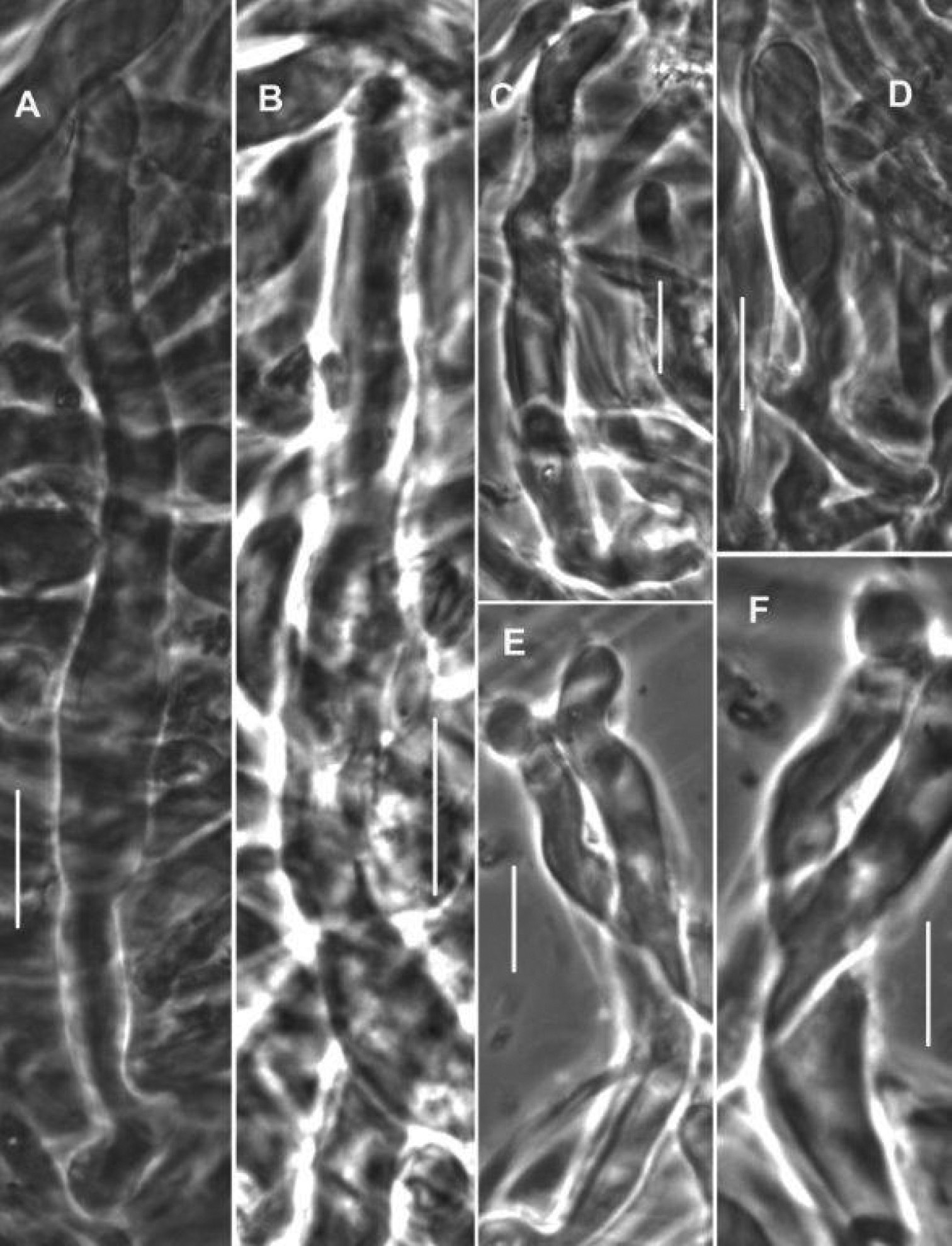 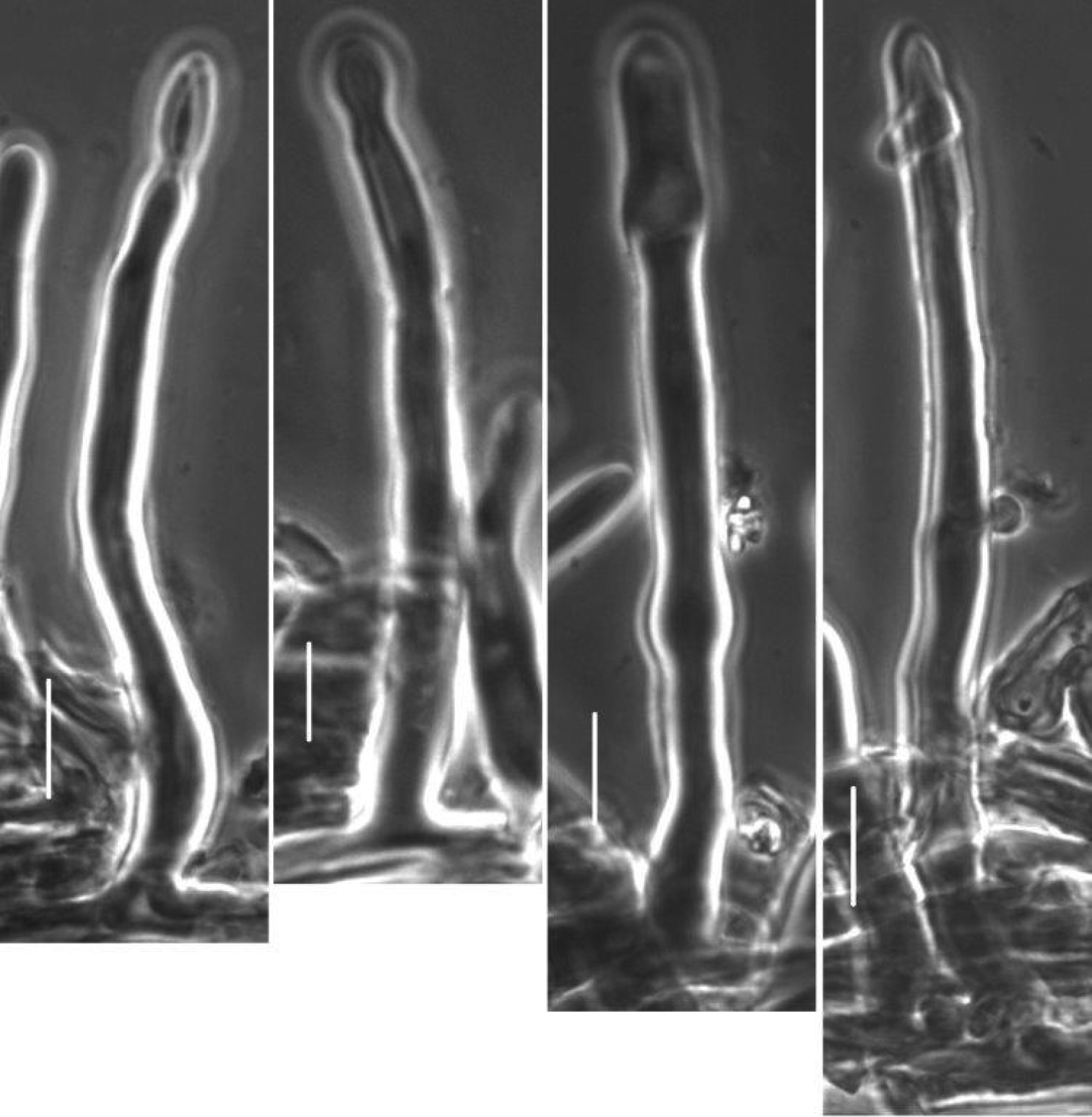