Eggs and first-instar larvae were found inside the early (green) seedpods of Vachellia constricta  and associated with the presence of weevil eggs and larvae ( Curculionidae  ). Eutrichosoma mirabile  eggs are laid among the host eggs inside the seedpods between the ovule and the inner wall of the pod. Hatching of the parasitoid seems to coincide with or precede hatching of the host because parasitoid eggs were never observed without host eggs. The majority of planidia found were parasitizing first- or second-instar weevils (~85%). Typically, only one planidium was found per host, positioned anterodorsally on the body just behind the head attached by the mandibles; always on the external surface and never penetrating the cuticle. The remaining unattached planidia were observed crawling around near clusters of host eggs. Eggs and planidia were the only life stages of the wasps observed in the seedpods. While there may be several eggs and early instars of weevil (up to ~10) per ovule within a seedpod, by the time the weevils are in their fourth instar, there is only one individual per ovule remaining. Considering the wasps are ectoparasitic koinobionts, they are likely detaching then reattaching and repositioning themselves on their hosts between host molts or transferring between individual host larvae. Given the similarities between E. mirabile  and chrysolampines (discussed below), it is assumed that the E. mirabile  planidia remain attached externally to the weevil when it leaves the seedpod to pupate in the soil, where the parasitoid likely finishes development. We were not able to keep the weevil larvae alive outside of the pods to allow the parasitoid to develop further. Parasitism rates shown in Suppl. material 1: Table S3.

Determining if a first-instar larva is a type I planidium (i.e. undergoes hypermetamorphosis sensu Pinto (2009)) requires examination of subsequent instars, which we did not find for Eutrichosoma  . However, the mobility of the larvae observed in the seedpods and inferred from their koinobiont ectoparasitc behavior suggests that Eutrichosoma  behavior is congruent with other PLC larvae, even if their morphology is not as derived as Eucharitidae  , Perilampinae  , or Philomidinae  , which are all more heavily sclerotized and generally lack ventral fusion of the terga. Larvae of Eutrichosomatinae  and Chrysolampinae  appear to be somewhat intermediate between typically hymenopteriform first instars of other chalcidoid taxa and the highly derived planidial larvae in the PLC. 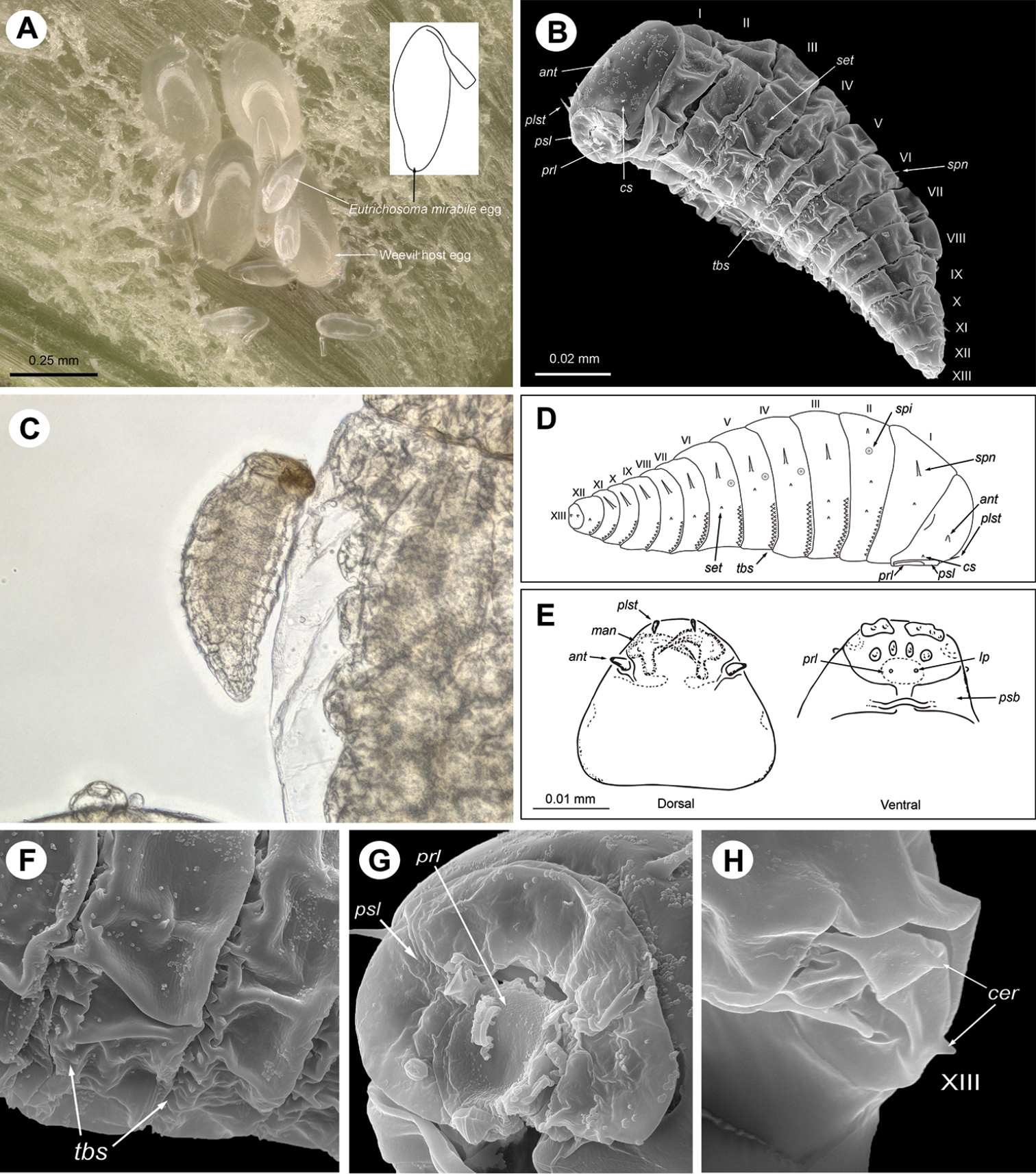