The new species is further distinguished from E. bicolor , E. corumbaensis , E. matogrosso , and E. muriaquitan in not having any light spot in the axillae and groin (light spot present). It also differs from E. bicolor , E. corumbaensis , and E. haroi in having grayish cream venter and hidden surfaces of limbs (bright yellow coloration on venter and hidden surfaces of limbs on the other species). Moreover, E. bicolor also lacks a mid-dorsal stripe, which is notorious in the new species (but note that this character might be variable in several microhylid species, and that our sample size for E. araios is fairly small).

Elachistocleis araios ( Figs. 7 View FIGURE 7 A-B) is most similar externally to E. panamensis ( Fig. 7C View FIGURE 7 ), from which is differs by the following combination of characters: a short and rounded snout in E. araios (long and truncate snout in E. panamensis ); present, although weak, lateral fringes in TIV (absent); thenar tubercle small and rounded (large and oval); inner metatarsal tubercles small and rounded (big and oval); dorsal color patterns with dark spots without defined patterns (generally a repetitive triangular design or a large irregular spot in the middle of the back); venter immaculate (cream with clear spots poor visible); grayish-brown, ash-looking, throat and chin—differs from ventral pattern (brown-cream with white spots—same as venter).

Coloration of the holotype in life. The coloration of dorsum, thighs, shanks, and arms is light brown with small black patches and tiny yellowish-cream dots. A narrow light cream dorsal line extends from the tip of snout to the vent. A thin dorsolateral line resulting from the combination of brown spots extends from the nostrils to the inguinal region and, creates a clearly marked edge between dorsum and flank colorations. Two inguinal spots are present visible from the dorsum. The posterior surface of thighs has a light cream line extending to the inguinal region. Irregular dark brown lines are distributed in thighs, tibia, and feet and, a slightly cream line running along the back of the thighs and across the urostyle bump. Flanks and ventral surfaces of head are light brown with small yellowish-cream spots. Venter is uniform light yellow anteriorly and grayish-yellow posteriorly. Ventral surface of thighs and arms is yellowish cream with light brown ( Fig. 4 View FIGURE 4 ).

Coloration of the holotype in preservative. The coloration of dorsum and forelimbs is uniformly dark brown with few cream spots. The dorsolateral line is not distinguishable; flanks and ventral surface of the head are grayish-cream. The middorsal line is cream, the two black patches on the posterior surfaces of dorsum, the cream line on the thighs, and the irregular dark brown lines in the forelimbs are distinct. The venter is yellowish-cream anteriorly and grayish-cream posteriorly ( Fig. 7 View FIGURE 7 ).

Etymology. The name of the new species is a noun in apposition from the Greek araiós (αραιός) which means scarce, alluding to the fact that it is a difficult species to find in field.

Distribution, natural history and conservation status. Elachistocleis araios is only known from two localities in the lowlands of Azuay and Guayas provinces of Ecuador. The holotype was found in a western foothill forest fragment. The habitat is characterized by the presence of dense vegetation cover with a thick layer of leaf litter and several small streams ( Fig. 8 View FIGURE 8 ). The holotype was collected at night while walking through the leaf litter in a trail of cacao crops near the forest. Sympatric amphibian species included: Epipedobates anthonyi, Lithobates bwana, Leptodactylus labrosus, and Pristimantis achatinus . The paratype and holotype were adult gravid females.

At the type locality, land has been concessioned for mining. Traditional mining is the most common type of mineral extraction in the region. In this process, toxic compounds (e.g., cyanide) and heavy metals (e.g., mercury) are used for extraction and refinement of minerals. Consequently, water bodies, and soils are directly and irreversibly affected. The second locality is a Provincial Natural Recreation Area of 631 ha, but it is an area with strong deforestation pressures.Activities such as cattle ranching and agriculture are widespread in the area as well. Therefore, important extensions of natural vegetation have been replaced with crops and grass. Despite this, we do not have enough evidence to define the degree of threat of this species and we highlight the need for population-level studies to know its status, which is why we recommend that E. araios be listed as Deficient Data on the IUCN Red List. 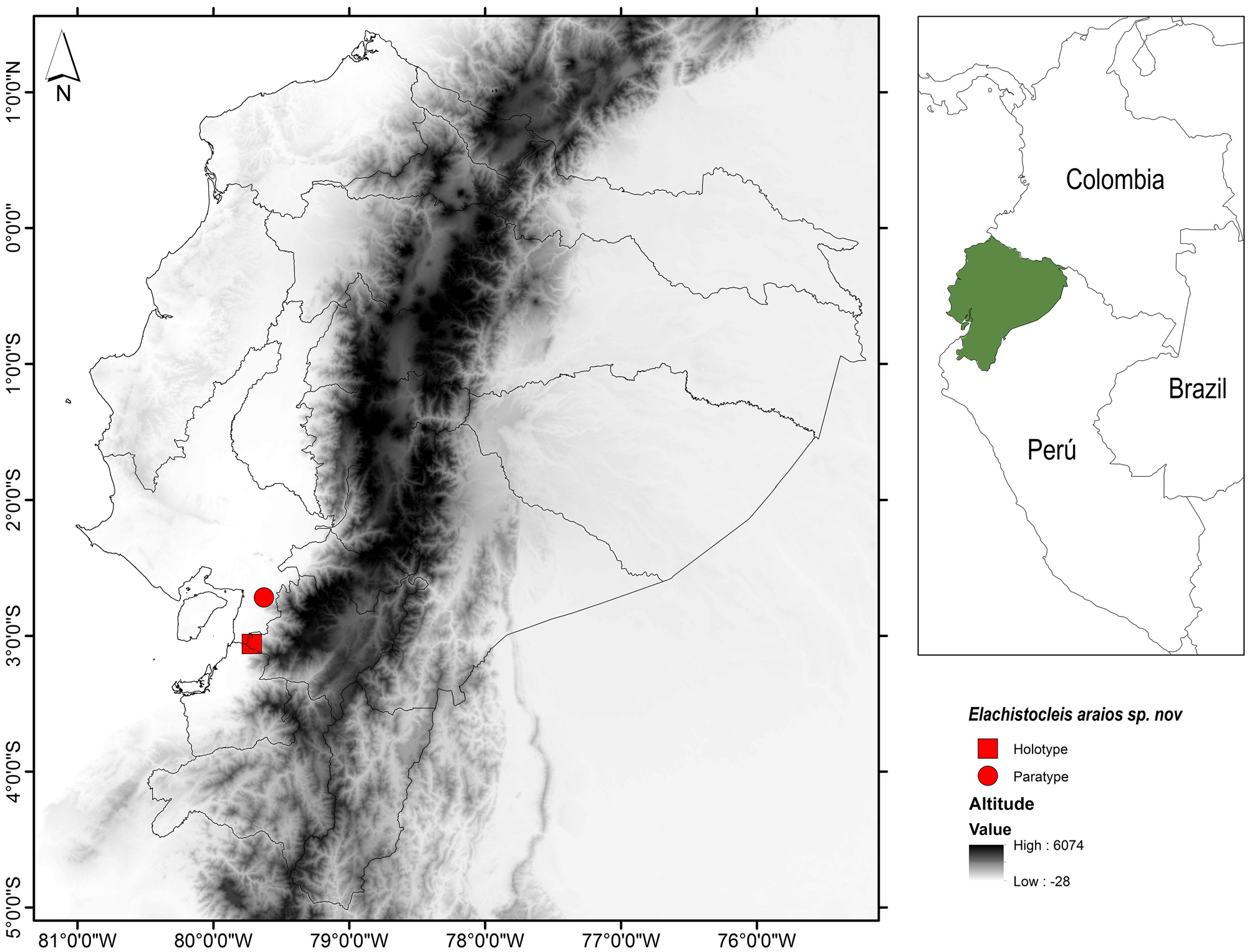 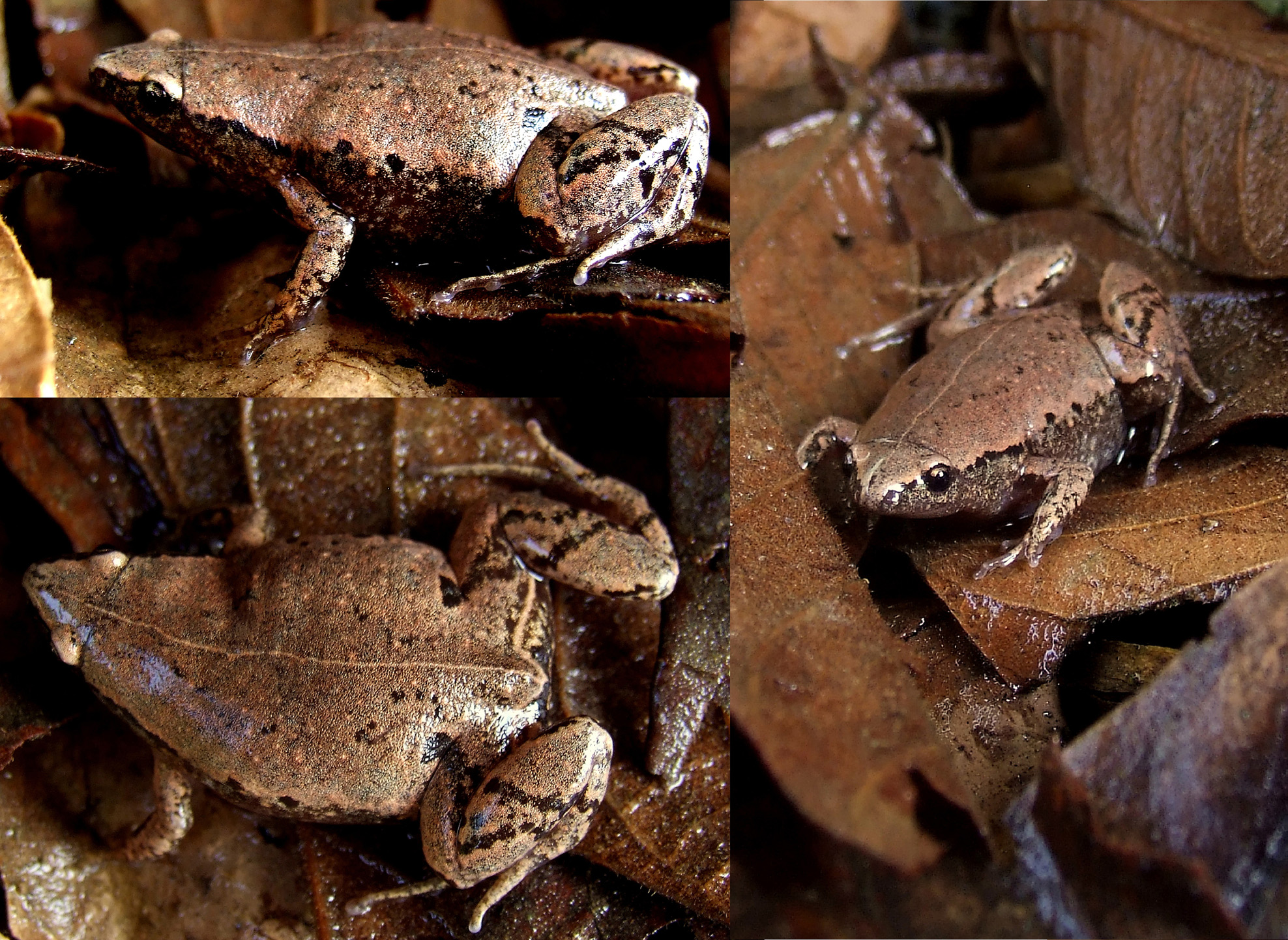 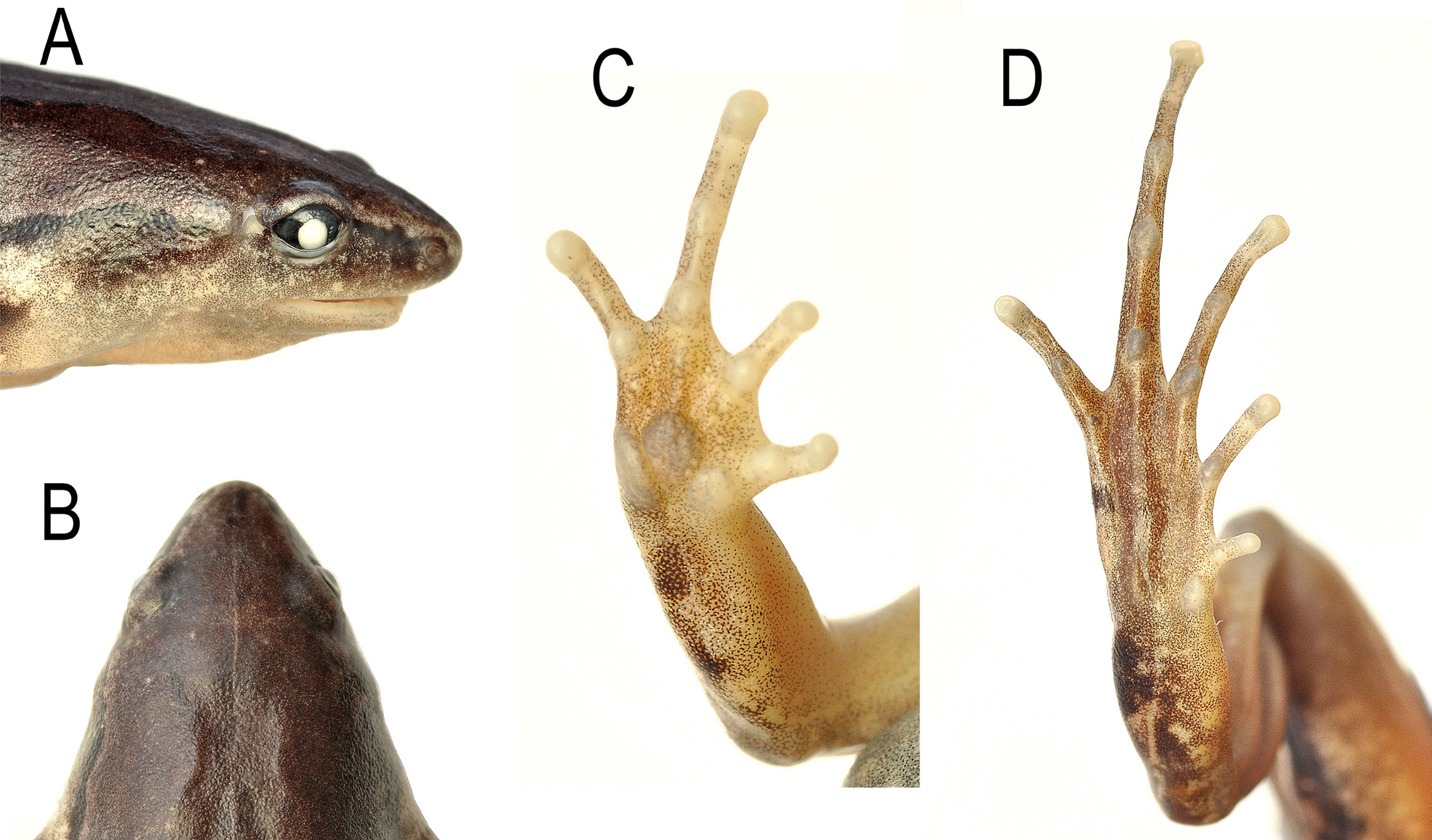 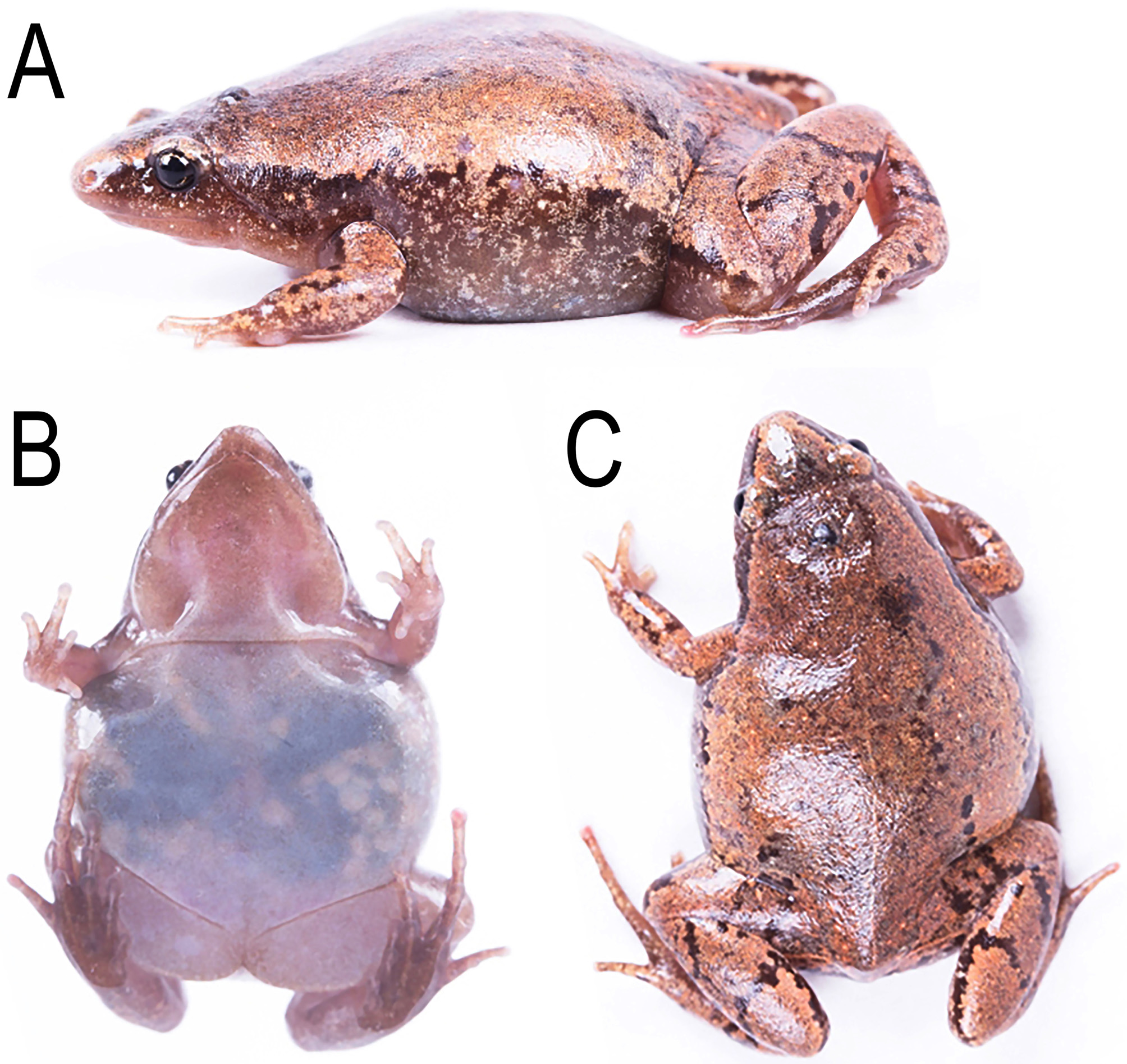 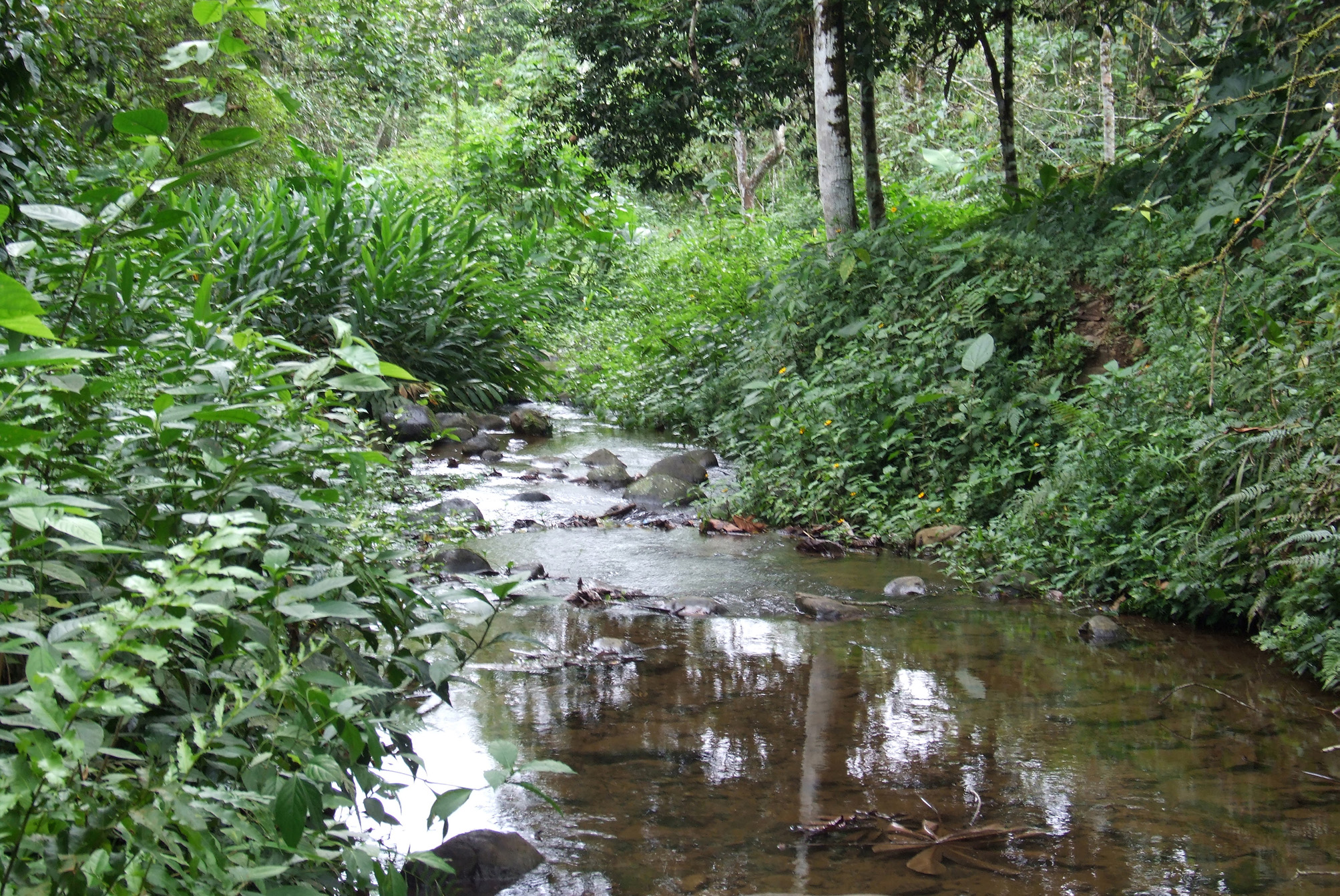 FIGURE 8. Habitat of the holotype of Elachistocleis araios sp. n.