Shrub to small tree, 1.5-15 m tall, moderately branched; trunk of flowering individuals 5-8 cm d.b.h.; some individuals with prop roots. Stems glabrous, the nodes moderately to densely tuberculate, density of tubercules increasing distally along each internode, the internodes 6.5-9.6 cm long and 0.5-1.1 cm in diam.; shoot apex emerging from the sheathing leaf base. Prophyll minute and hidden by the sheathing leaf base. Leaves more or less distichous on flowering branches, with petioles 6-14 × 0.7-1 cm at flowering nodes, vaginate, and with persistent margins, the margins extending to the leaf base or projecting 1-10 mm beyond the insertion of lower leaf lobe, glabrous, sparsely to moderately tuberculate; laminae 25-50 × 15-42 cm, broadly ovate, the apex obtuse, rounded, the base oblique, cordate, the lobes equal or more commonly somewhat unequal, extending 2-8 cm below the petiole attachment, divergent and never overlapping the petiole, the sinus open and the apices of the lobes nearer the leaf margin than the petiole, the sides of the lamina arising 7-8 mm apart on the petiole, the lamina drying thickly chartaceous, densely glandular-dotted (usually blackish on dried specimens, 3-5 per mm2, increasing in density along the leaf margin), glabrous above, glabrous to sparsely pubescent on the lamina below and moderately to densely pubescent on the veins below with much shorter trichomes (< 0.2 mm long; these more conspicuous on the secondary and tertiary veins, often lacking on the midvein), the 4-6 pairs of major secondary veins arising from the lower 2/3 of the midvein, arcuate-ascending, primary–tertiary veins somewhat impressed above, prominent below. Inflorescences free from the leaf base of the same node, pendulous, 40-72 × 0.4-0.8 cm in flower and 0.8-1.1 cm in diameter in fruit, the flowers densely crowded and +/- banded; peduncles 2.5-6 × 0.25-0.5 cm, white to green in fruit, glabrous; floral bracts 0.7-1.0 mm broad, triangular to triangular-rounded, nearly glabrous with upper margin white ciliate to densely pubescent throughout; stamens 4 per flower, the stamens maturing asynchronously such that only one or two are apparently visible per flower at one time, white, the anthers 1-1.5 mm long, the filaments clavate, the connective somewhat broadened between thecae and these divergent at ca. 45°, dehiscing laterally; fruits rounded or rectangular from above by compression, 1.5-2 × 1.2-2 mm, the apex truncate, glabrous, gland-dotted, stigma lobes 3(-4), 0.5-0.8 mm long, sessile or on a very short style, caducous; seeds rounded-square, flattened, 1.5-2 mm.

Piper kelleyi  is found in shaded understory habitats of primary and secondary lower montane rainforests ( Neill 1999) on the eastern slopes of the Andes in Ecuador and northern Peru; elevation 1200-2400 m ( Fig. 3AView Figure 3).

Piper kelleyi  is named for Dr. Walter Almond Kelley (1942-2010). Dr. Kelley spent a good portion of his career focusing on taxonomy within the genus Cryptantha  ( Boraginaceae  ; e.g., Kelley and Wilken 1993), but became fascinated with Piper  when he visited Costa Rica in 1997 to work with Piper  species at La Selva Biological Station. He was interested generally in angiosperm evolution, evolution of unique morphologies, stem anatomy, and tropical biology and spent years working with Piper  from Costa Rica and Ecuador (e.g., Tepe et al. 2009). He examined the unique morphology of Piper  , and documented Piper  stem anatomy. He had made considerable progress on understanding phyllotaxy and the notoriously complicated stem anatomy in Piper  , and produced two substantive manuscripts on Piper  biology. His extensive observations on Piper  morphology, included the following comments:

Piper kelleyi  exhibits the third of these patterns. He established the herbarium (MESA) at Colorado Mesa University, Grand Junction, Colorado (CMU), and cultivated a high diversity of Piper  species at the CMU greenhouse, including Piper kelleyi  . These plants are still used for research today.

According to the IUCN Red List Categories ( IUCN 2013), we deem it necessary to classify Piper kelleyi  as Data Deficient (DD). Piper kelleyi  appears to occupy a relatively narrow elevational band along the eastern slopes of the Andes in Ecuador and northern Peru, but is fairly common in Ecuador between 1400-2200 m in Napo and between 1900-2000 m in Zamora-Chinchipe Provinces. These two areas have established field stations with projects focusing on Piper  and, accordingly, collection of Piper  has been comparatively intense in these areas. Scattered collections of Piper kelleyi  in other parts of its range, however, indicate the species’ presence, but are not necessarily informative of its abundance. Collecting intensity across the Neotropics is decidedly uneven ( Schulman et al. 2007) and virtually nothing is known about the density of individuals of this species outside of the two focus areas mentioned above. Consequently, we are presently unable to make an informed statement regarding the conservation status of Piper kelleyi  . 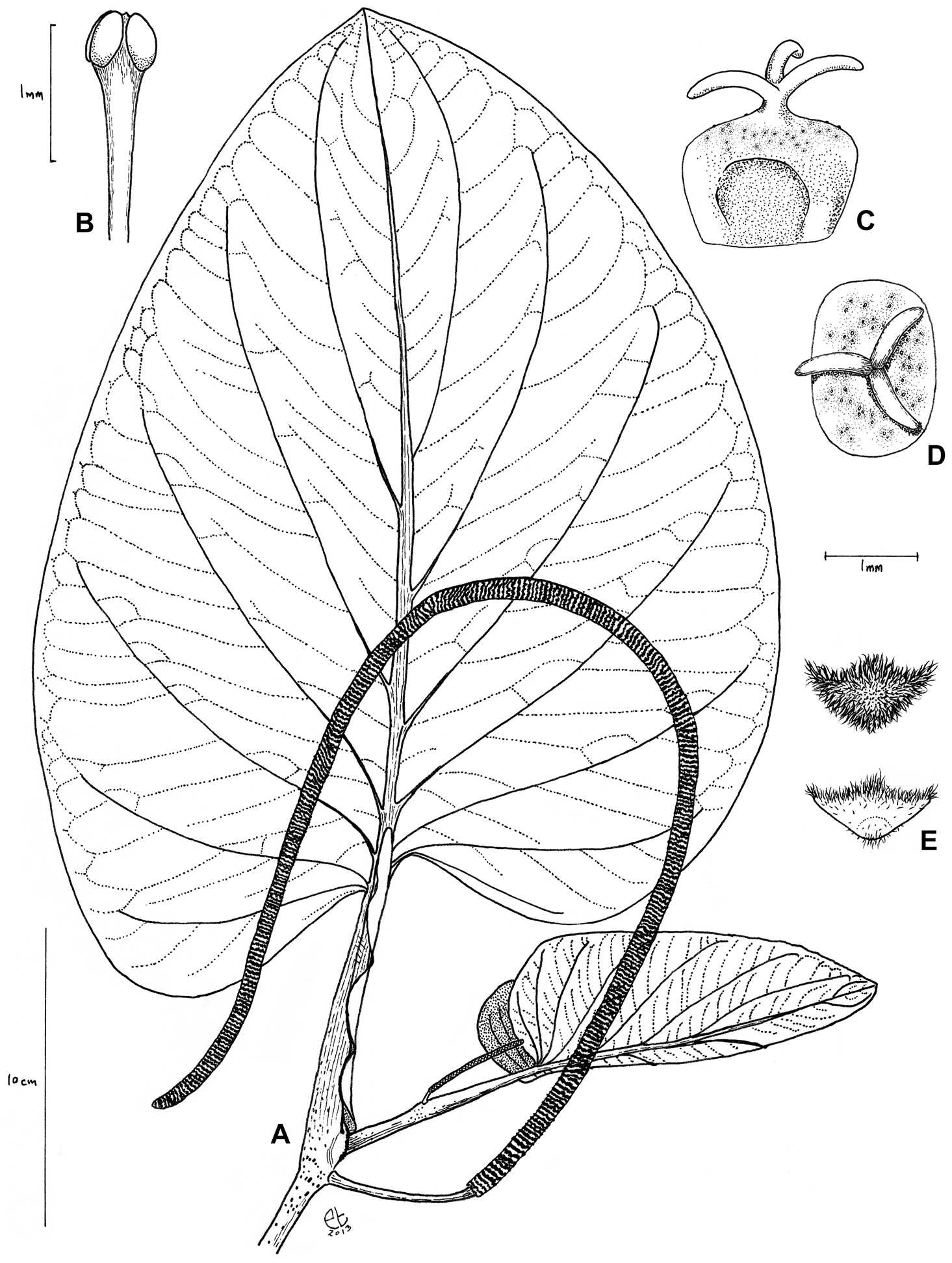 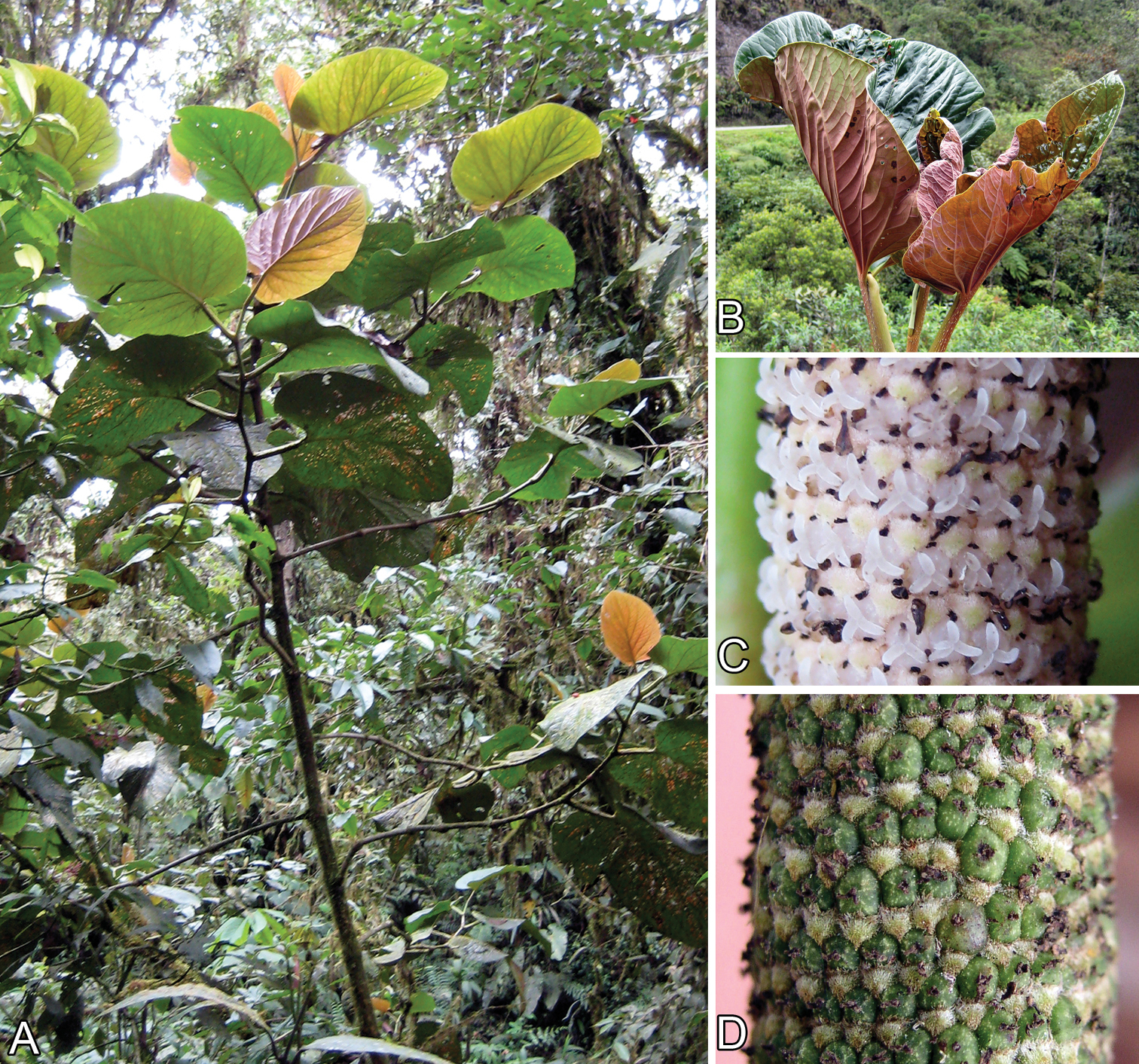 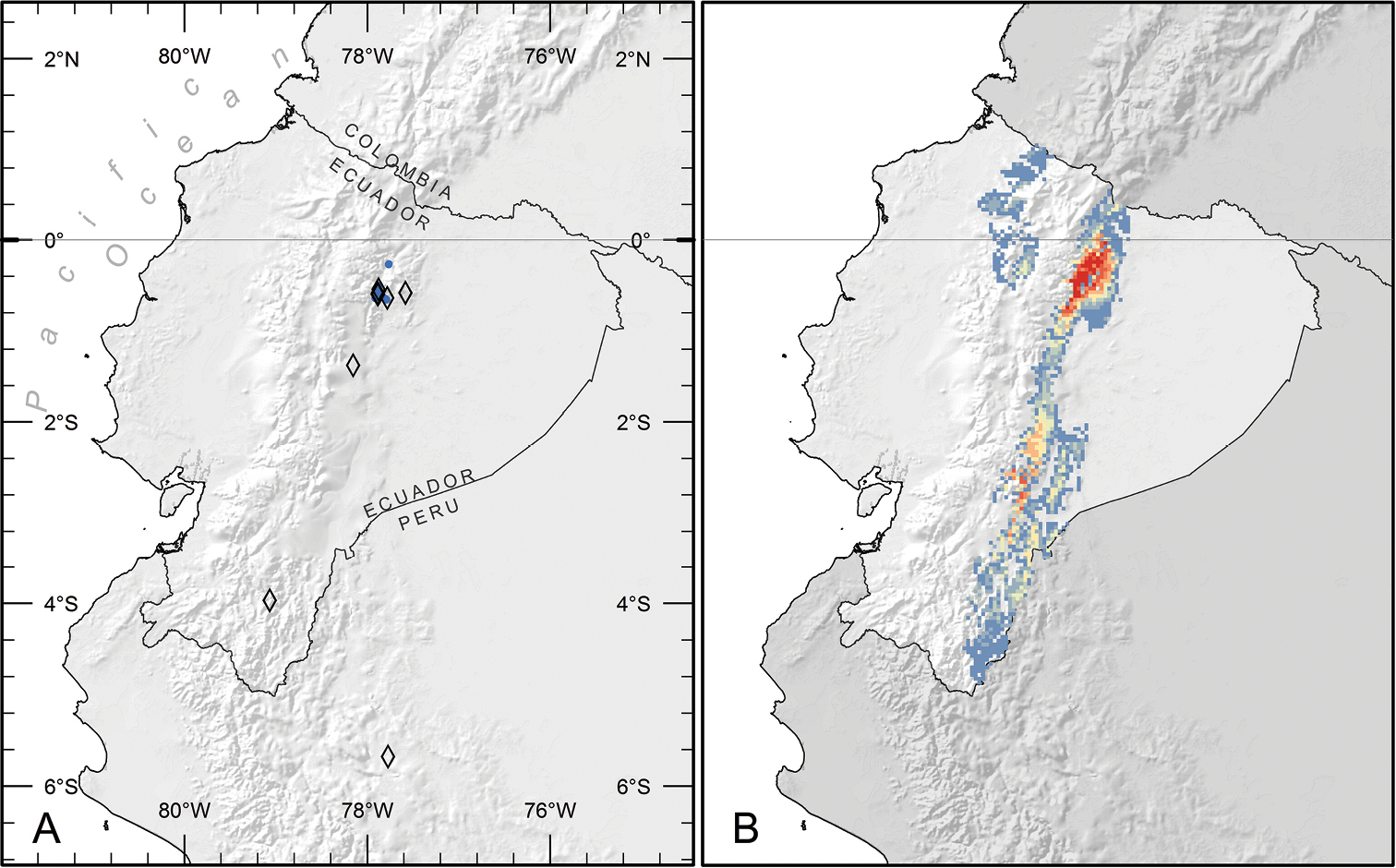 Figure 3. Distribution of Piper kelleyi. A Distribution of known localities based on collections (open diamonds) and study plots used to gather natural history data (blue circles) B Predicted distribution based on analysis of habitat parameters using the maximum entropy method. Areas in red are the most likely to have suitable habitat for Piper kelleyi (probability = 0.75 - 0.87), and areas in blue (0.02 - 0.08) or unlabeled (<0.02) are the least likely.