Diagnosis. Elachistocleis cesarii  is recognized by the following combination of characters: 1) ventral coloration is white or yellow with gray marks and reticulations; 2) presence of postcommisural glands behind the corner of mouth; 3) tympanum concealed; 4) advertisement call with the mean dominant frequency of about 3.5 kHz.

Comparison with other species. In life, Elachistocleis cesarii  is readily distinguished from E. erythrogaster  by the absence of the reddish coloration of the ventral portion of its body (see Figures 2View FIGURE 2 C, D and 3 C, D), its smallest body size, and the presence of a well defined femoral stripe (not well defined in E.

Color in life of individuals apart from the type series ( Figure 3View FIGURE 3 C, D). – Dorsum and limbs are dark brownish gray with small white dots. The single, subgular vocal sac is darker than the venter. The chest is yellow with gray marks. Belly white or yellow, with gray marks and reticulations, which reach the flanks. Orange femoral stripe present on the posterior surface of the thigh. Orange inguinal spots present. There is a tiny white vertebral line from the snout to the vent.

Color in preservative of individuals other than the type series (70 % ethanol). – Dorsum and limbs are dark grayish blue. Ventral region is gray with white spots. These spots reach up to the lateral portion of the animals. The throat is darker than chest and belly. The inguinal spots and femoral stripes on the posterior surface of the thigh are white. Vertebral line undistinguished.

Variation. Females are larger than males (see Table 1). Females present variation in size, with the SVL varying from 19.4 up to 42.7 mm ( Thomé & Brasileiro, 2007). The vertebral stripe may be absent. The ventral spots may not reach the flanks and the groin region of some individuals. The throat of males is darker than that of females.

Tadpoles. Tadpoles are unknown; however, 10 tadpoles collected in the municipality of Vitória Brasil, state of São Paulo, Brazil, and briefly described under the name Elachistocleis  sp. by Rossa-Feres and Nomura (2006), could be E. cesarii  .

Natural history notes. Elachistocleis cesarii  calls during the wet and hot season of the year (summer) as a prolonged breeder; however, after heavy rains during the hot nights it may behave like an explosive breeder (sensu Wells 1977). Males call with the legs in the water and the body out of water, holding the emergent vegetation with the forelimbs. The amplexus is axillar. We collected two amplected pairs that laid eggs in plastic bags. One female deposited 736 eggs and the second deposited 1126 eggs. In nature, the eggs are laid in the water surface as a gelatinous mass attached to floating or emergent vegetation ( Figure 3View FIGURE 3 F). Newly metamorphosed specimens have a mean SVL of 11.83 mm ± 0.38 (11.4 – 12.3; N = 6). The ecology of this species has been studied by Thomé and Brasileiro (2007) and a short communication about the defensive posture was published by Toledo (2004), in both articles under the name Elachistocleis cf. ovalis  .

Etymology. The meaning of the specific name of E. cesarii  was not stated in the original description.

Discussion. The taxonomic status of Elachistocleis ovalis  remains unclear. This fact limits the recognition of several related still undescribed species in South America. These species are incorrectly being referred to as E. ovalis  and even E. bicolor  in the past and current literature, as well as in museum collections. The lack of correct identification of all those taxa has direct implication in conservation, as some of them may be endangered or may be endemic to certain localities, countries or biomes. Therefore, a taxonomic review of the genus urges attention and may reveal a great hidden biodiversity. 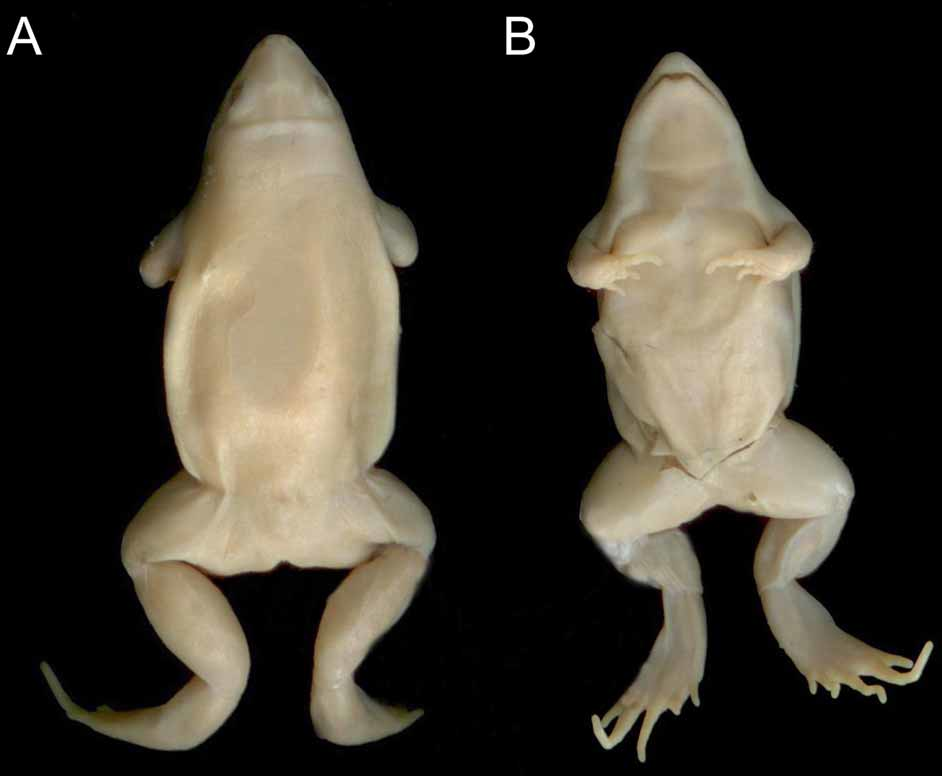 FIGURE 3. Dorsal (A) and ventral (B) views of Elachistocleis piauiensis from the municipality of Viçosa do Ceará, state of Ceará, Brazil; dorsal (C) and ventral (D) views of E. cesarii from Itapé, municipality of Rio Claro, state of São Paulo, Brazil (In C an arrow indicates the postcommisural gland); (E) dorsal view of E. surinamensis from Trinidad and Tobago; (F) gelatinous egg mass of Elachistocleis cesarii photographed in nature, where it is possible to visualize the embryos in development inside the egg capsules. 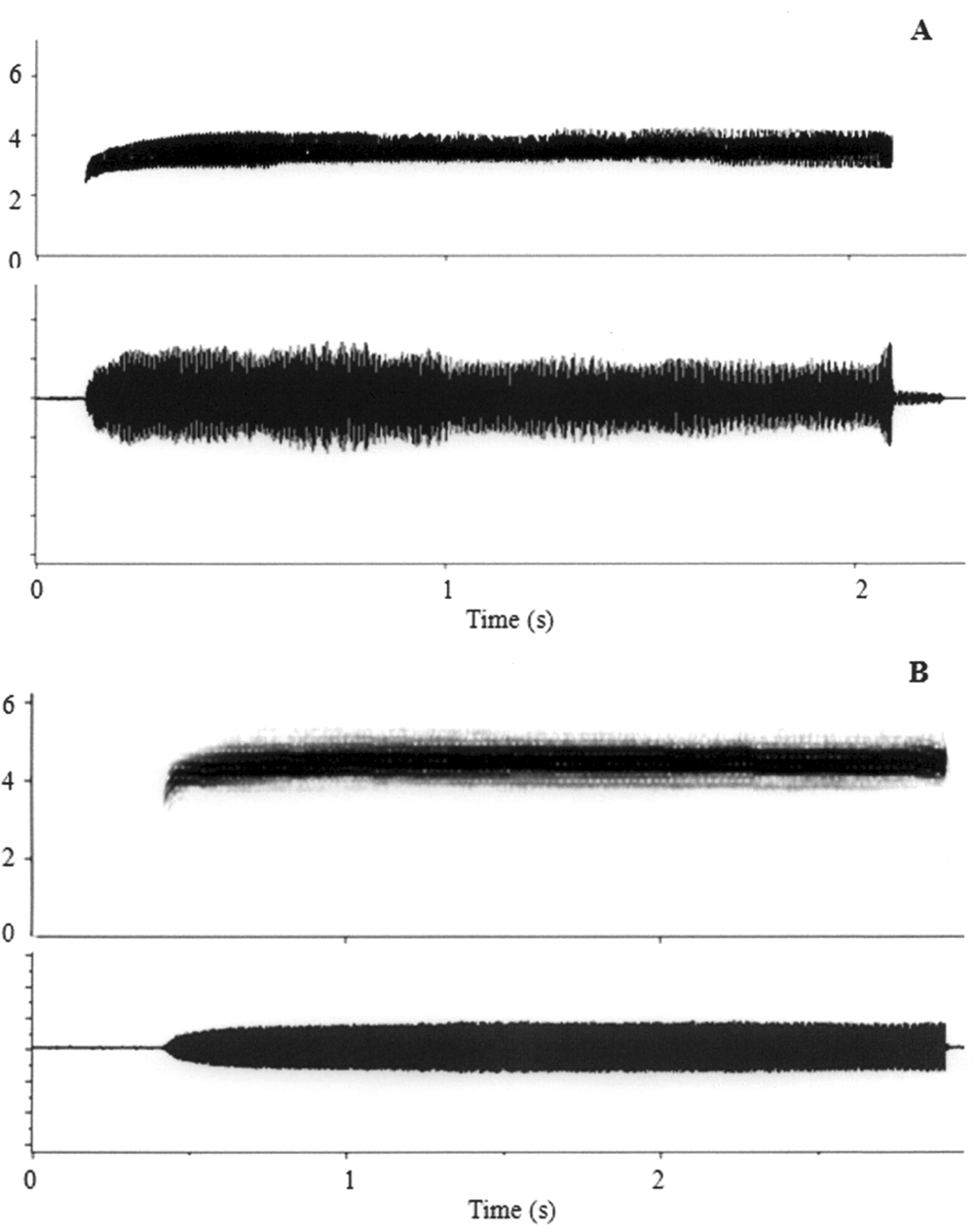 FIGURE 4. Spectrograms (above) and waveforms (below) of the advertisement calls of (A) Elachistocleis cesarii recorded in the district of Itapé, municipality of Rio Claro, São Paulo, Brazil, on 29 January 2002, air temperature of 23.1 ºC and (B) Elachistocleis piauiensis recorded in the municipality of Caucaia, Ceará, Brazil, on 15 May 2005, air temperature of 27 ºC. 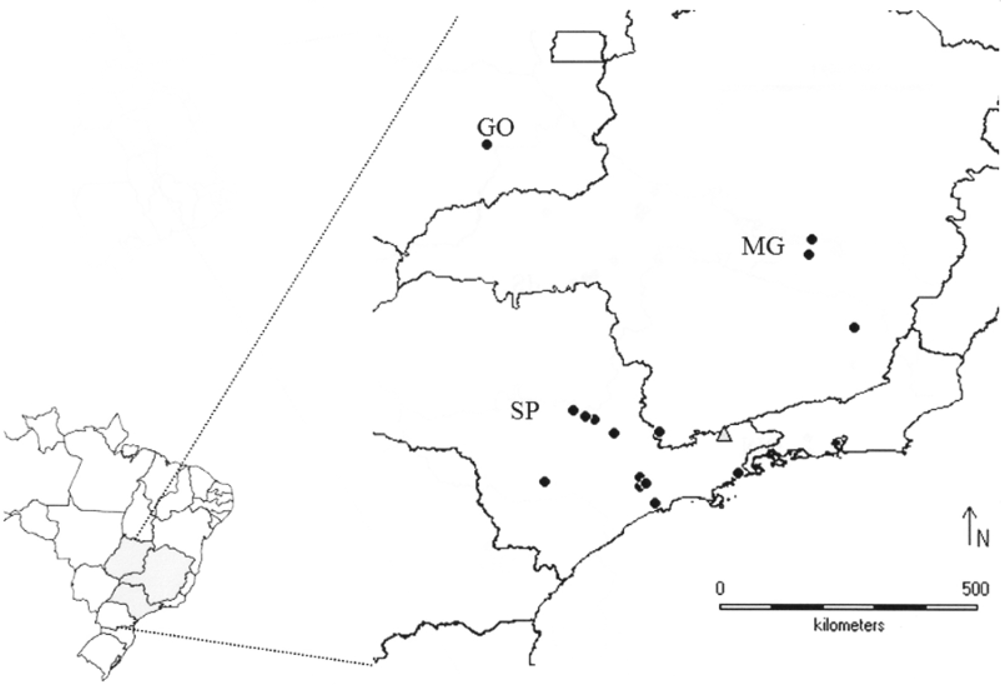 TABLE 1. Measurements of the type series and additional specimens recently collected of Elachistocleis cesarii. Abbreviations of the measurements are defined in the Material and Methods. Values presented as mean ± standard deviation (range).