Small interzooidal, vibraculoid avicularia oval, placed distal or distolateral to each autozooid, with wide oval to reniform opesia, slightly narrower in middle; seta long and slender, up to twice length of autozooid, curved.

Remarks. When revising NE Atlantic and Mediterranean material, Reverter-Gil et al. (2012) suggested that more than one species was reported under the name Setosella vulnerata (Busk)  in the literature. Examination of the type of S. vulnerata  , and of specimens on which the descriptions of several authors are based (e.g. Prenant & Bobin 1966; Zabala & Maluquer 1988; Hayward & Ryland 1998), is required to resolve this problem. Also, owing to the few morphological characters present, and the existence of only slight differences between populations, genetic analysis will be needed to define the northern and southern limits of distribution of this/these species.

A revision of the species complex is beyond the scope of this paper, but in order to initiate this process and to fix the status of Setosella vulnerata Busk (1860)  we have here re-described and designated a lectotype ( NHMUK 1899.7.1.1487) and paralectotypes ( NHMUK 1911.10.1.760) from the type locality, the Shetland Islands. The types are also imaged using SEM for the first time ( Figs 37, 38View FIGURES 33 – 38). Comparison between specimens is hindered by the fact that the lectotype is not bleached, and that certain skeletal characters are absent from the analysed paralectotype. For instance, the exact shape of the ancestrular opesia could not be observed, while Hayward & Ryland (1998, fig. 103 B) depicted an oval opesia in a British non-type specimen. For a thorough revision, resampling of the type locality will therefore be necessary.

Apart from slightly coarser granulation of the cryptocyst, our single colony from Galicia Bank does not seem to be distinctly different from the type of S. vulnerata  in morphology or morphometrics. Although the window in the ooecium also seems to be larger than in S. vulnerata  , this may simply be due to the fact that the only maternal zooids in our specimen are young and situated at the colony margin, whereas it can be observed in Setosella  species generally that the size of the window is reduced with age (J. Souto pers. observ.).

Our specimen also largely corresponds with the material described by Reverter-Gil et al. (2012, fig. 4), although in their figured specimen from off SW Portugal the opercular shelf (lunula) in the distal orifice margin appears slightly broader whereas in our specimen it is narrower. Also, the ancestrula in our specimen is distinctly larger (0.315 mm) than that (0.266 mm) reported by Reverter-Gil et al. (2012). Whether these characters reflect intra- or interspecific differences has to be determined in a separate study.

The only colony collected from Galicia Bank encrusted a small sand grain at 867 m depth. 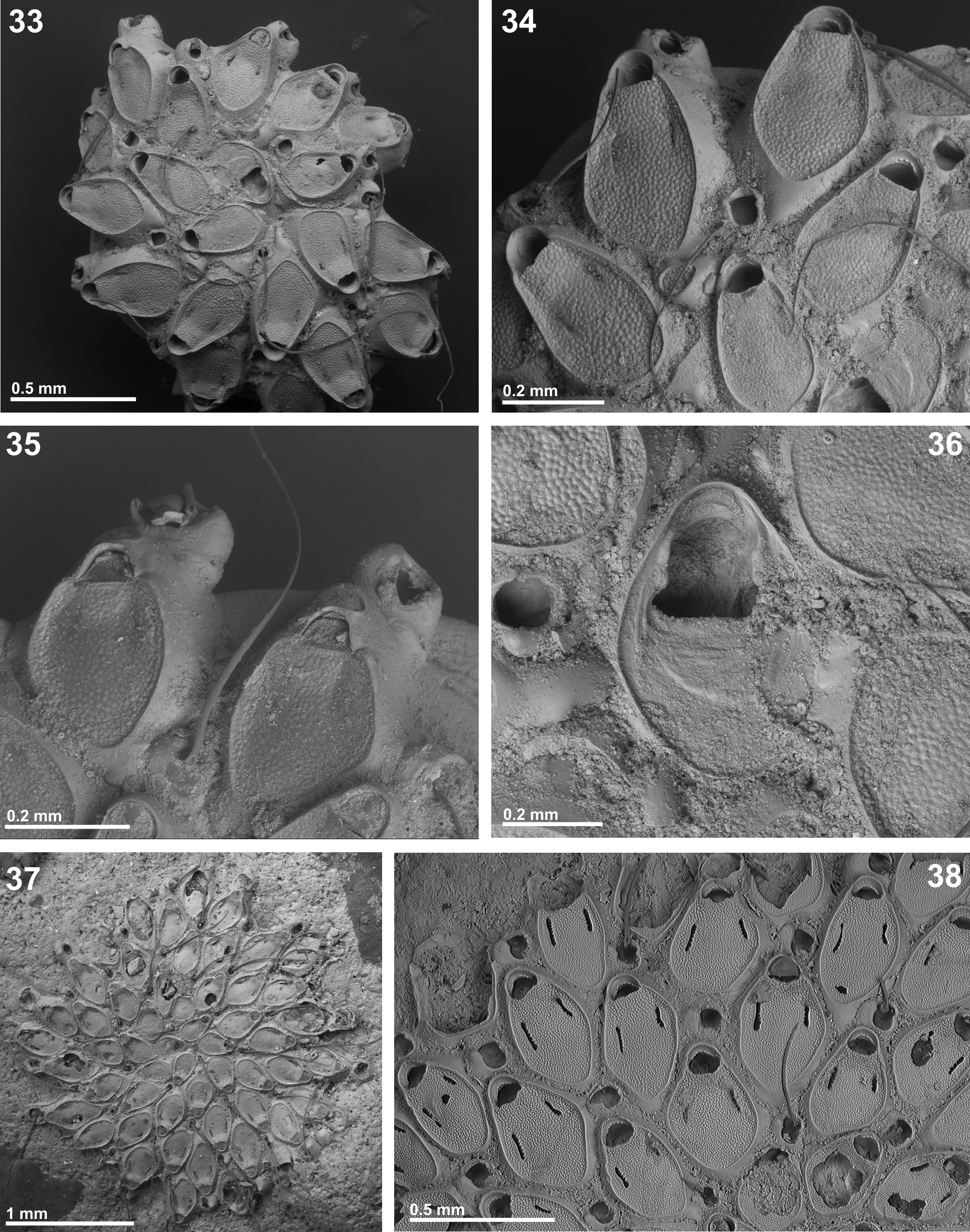