Adult diagnosis. Stegosatyrus is distinguished from all other Euptychiina by two uniquely features: 1) tectiforme (in lateral view) and spatulated (in dorsal view) uncus ( Figs 23, 29 View FIGURES 23 – 32 ), and 2) sclerotized sternite VIII and developed spiracle in females ( Fig. 31 View FIGURES 23 – 32 ). Among the genera with somewhat similar chromatic patterns, Stegosatyrus n. gen. can be easily distinguished from Yphthimoides Forster, 1964 by its genital morphology, namely by the absence of projections or spines on the apex of the valvae, and the presence of a subapical ocellus on the dorsal face of the forewing (FW). Stegosatyrus n. gen. differs from Euptychia Hübner, 1818 by the absence of the median and posterior apophysis of the tegumen. The shape of the valvae and of the anterior projection of the saccus, as well as the absence of projections on the apex of the valvae, along with the absence of the subapical ocellus on the dorsal face of the FW, and the amount and arrangement of ocelli on the ventral face of the hindwing (HW), distinguishes Stegosatyrus n. gen. from Magneuptychia Forster, 1964 . It is distinguished from the Nearctic genus Neonympha Hübner, 1818 by: having a labial palp which is twice as long than the head (in Neonympha it is two and a half times to three times larger); the absence of spines on tarsomere I of the female prothoracic leg; the mesotibia with several spines; the presence of an ocellus in the subapical region of the FW; and the ventral face of the HW with rounded ocelli. Stegosatyrus n. gen. differs from the Nearctic genus Megisto Hübner , [1819] by the absence of an ocellus between M 3 -CuA 1 in the FW and between M 1 -M 2 of the HW, and absence of the discal line on ventral face of the HW. The male genitalia is very distinct between this two genera: Stegosatyrus presents the narrow upward curved gnathos with 2 / 3 the length of the uncus, whereas in Megisto gnathos and uncus of subequal length; the appendix angular in Stegosatyrus is reduced and narrow differing of the well developed and rectangular appendix angular in Megisto .

Description. Antennae 2 / 3 the length of the costal margin of FW, with white scales around the base of each flagellomere; chaetosema with light brown scales; postgena area with small white scales; labial palp two times the length of the head with small, thin and white scales on the dorsal view. Meso-thoracic legs slightly shorter than meta-thoracic legs. FW (length: 13–20 mm): sub-triangular, costa slightly convex, apex rounded, external margin slightly convex, without indentations, and inner margin straight. HW sub-oval, somewhat longer than wide, costa slightly convex, apex rounded, external margin convex, inner margin straight. Tegumen sub-rectangular with median concavity at the base; uncus two times the length of the tegumen with pronounced dilatation at the median portion in dorsal view and tectiforme laterally; gnathos narrow and curved upwards with 2 / 3 the length of the uncus; appendix angular small; valvae sub-triangular and apex rounded. Papillae anales with membranous apical half and elongated bristles; anterior apophysis developed; sternite VIII, in lateral view, as sclerotized as the proximal part of the papillae anales, and with a developed spiracle; ductus bursae 2 / 3 the length of bursa copulatrix; bursa copulatrix oval with two signa of equal length, positioned on the right side.

Etymology. The generic name is masculine, formed by combination of the words “ stegos ” and “ satyrus ”. “ Stegos ” is of Greek origin and refers to something roof-shaped, such as the uncus of the species of this genus, in lateral view. 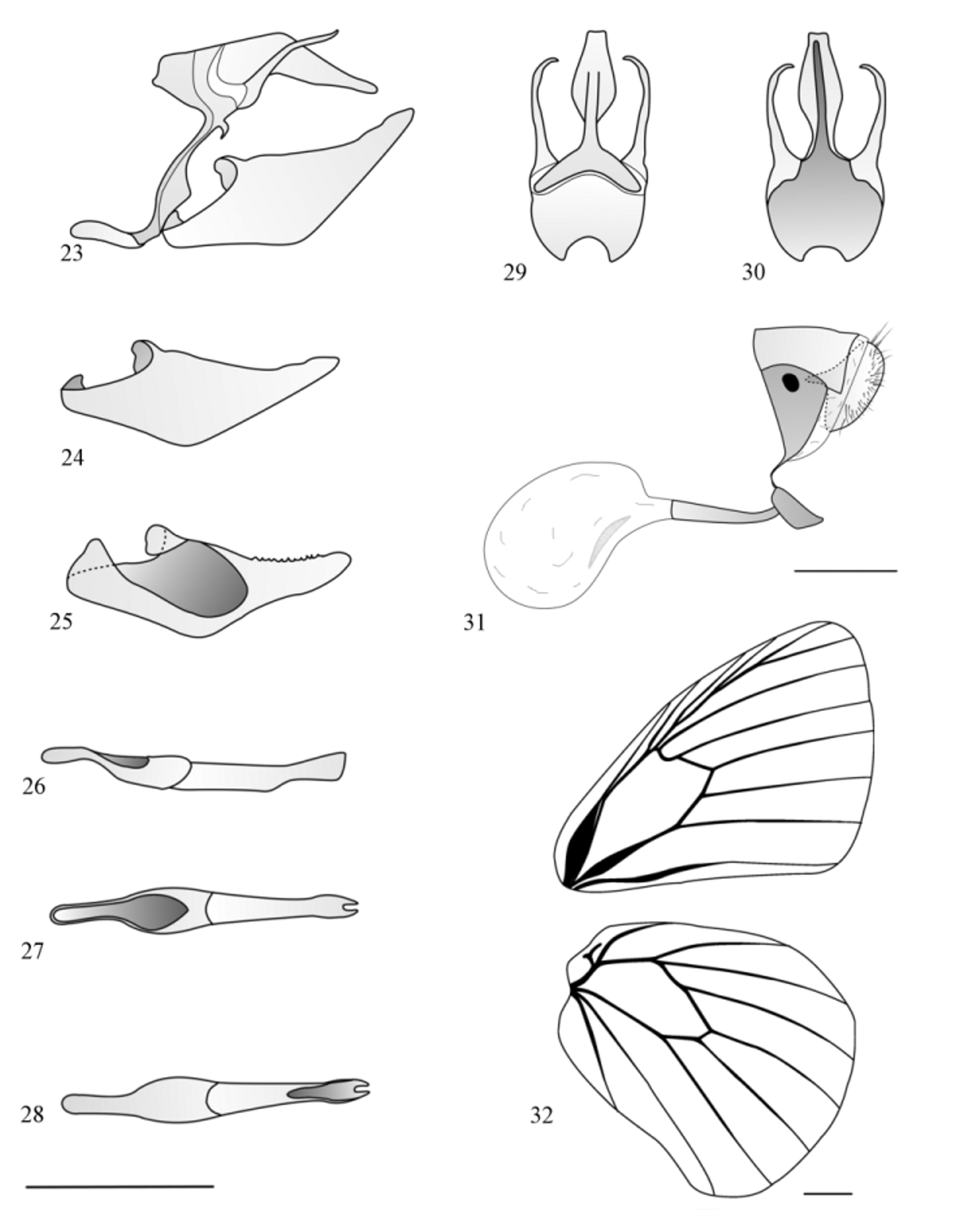