The sequence for the COI gene is 0% divergent from a sequence of a specimen of Chrysogorgia abludo Pante & Watling, 2011 (specimen NAS102-3, GenBank accession number GQ180138) collected at Nashville Seamount, New England Seamounts at 2246 m depth (Station 102; 34.5828°N, 56.8433°W) included as comparative material during the species description ( Pante and Watling 2011). In octocorals, it has been found that COI evolves very slowly and therefore it is not suitable for species discrimination, with different species having the same haplotype ( McFadden et al. 2011). Chrysogorgia abludo is distributed in the Atlantic Ocean, and morphological characters of the specimen collected in this study differ from the original description of C. abludo , as well as other species within the genus and hence considered a potentially new species In the phylogenetic tree (Fig. 15 View Figure 15 ) the specimen was also recovered along with another specimen of Chrysogorgia , supporting its placement within the genus.

The specimen was attached to polymetallic crust on the slope of a seamount in the APEI 4, at 4124 m depth.

Remarks. Both 16S (0.3% K2P) and COI (0.6% K2) sequences are very similar to Mopseinae sp. NHM_330 ( Dahlgren et al. 2016), which morphologically resembles the genus Primnoisis . The specimen from the western CCZ likely belongs to the same genus but based on genetic and morphological differences represents a different species from that of the eastern CCZ.

Ecology. The specimen was found attached to a nodule in abyssal sediments of APEI 4 at 5018 m depth.

Comparison with image-based catalogue. No similar Alcyonacea morphotypes had been catalogued so far from seabed imagery in the eastern CCZ or in abyssal areas of the Kiribati EEZ. Consequently, the in situ image of CCZ_088 was catalogued as a new morphotype (i.e., Mopseidae gen. indet., ALC_018). However, it is often not possible to determine whether such small and abundant polyps are arranged in pairs or not, or the actual orientation of these with regards to the axis from seabed images.

Figure 15. Rooted Bayesian phylogeny of Octocorallia. Concatenated (16 S, COI, mtMutS, NADH 2) median consensus BEAST tree with posterior probability (PP) and bootstrap (BS) values indicated. Only values of PP> 0.70 and BS> 50 are shown, with values of PP> 0.95 and BS> 90 indicated with a circle. Nodes not recovered on the RAxML tree are indicated with a hyphen. Sequences generated in this study are highlighted in violet. 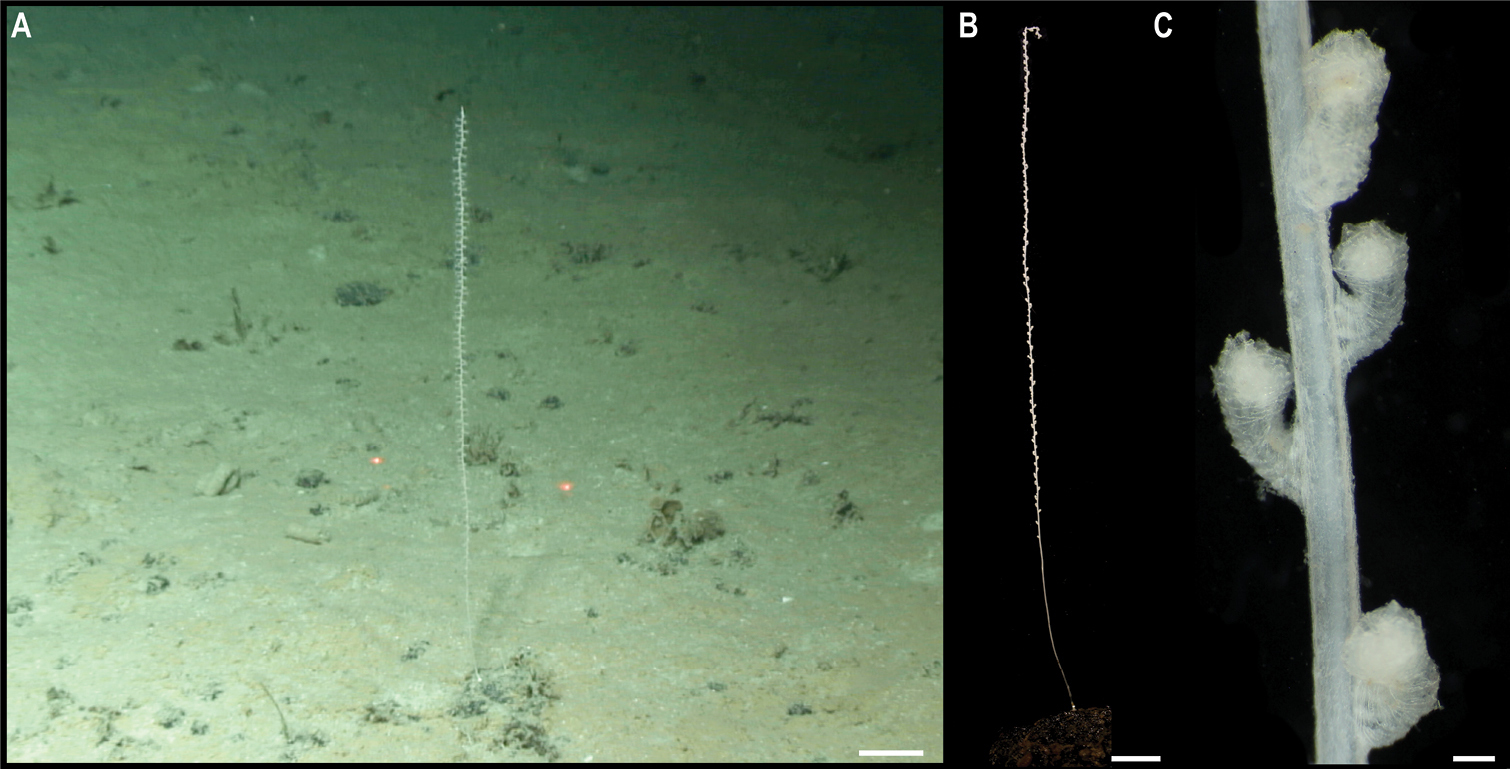