Differential diagnosis. The new species belongs to the crassior species group and is most similar to P. gratus Favette et Trouessart, 1904  by having oblique folds on the postero-lateral angles of the subcapitulum, strongly thickened and verrucous setae cG of genua II and a dorsal spine in the distal part of femur II. The heteromorph male of the new species differs from that of P. gratus  by the following characters: tibia II has a large, ventral clawlike extension directed anteriorly forming (together with tarsus I) a form of chela, the dorsal spine of femur II is short and rounded, and the subcapitulum is nearly rectangular, width at its base is about 1.2 longer than the width at the bases of the palps. In heteromorph male of P. gratus  , tibia II has only a short and rounded antero-ventral tubercle, the dorsal process of femur II is acute, and the subcapitulum is clearly trapezoidal in form, its width at the base is at least 1.5 greater than the width at the bases of the palps. The chela-like structure formed by tarsus and tibia II makes P. rubiginosus  similar to P. casuarinus  . However, in P. rubiginosus  , the claw-like extension is verrucous, tibia and genu II are without a dorsal crest, and seta cG of genu II is simple although thickened. In P. casuarinus  , the claw-like extension is smooth, tibia and genu II are without longitudinal dorsal crests, and seta cG of genu II is sword-shaped.

Etymology. The specific epithet was taken from the specific name of the type host.

Remarks. The presence of a large claw-like extension on tibia II in male of the species described above was probably the main reason why this sample was referred by Trouessart to P. brachiatus pugilator  , the only Protolichus  species with this character known in that time ( Favette & Trouessart 1904). The name P. brachiatus pugilator  was wrongly proposed by Trouessart (1899) to substitute for the valid name P. casuarinus Trouessart, 1884  , when he discovered that this species actually occurs on loriines of the genera Chalcopsitta  and Pseudeos  , and its original finding on a cassowary ( Trouessart 1884; Trouessart & Mégnin 1885) was the consequence of museum contamination. This error was not corrected even in the revision of Protolichus  by Favette and Trouessart (1904). W.T. Atyeo, who examined materials of Trouessart collection in 1980 s and further ( Gaud & Atyeo 1996), restored the valid name P. casuarinus  ; however for an unclear reason he marked the slide MNHN 34 F 2 as “ syntypes of P. casuarinus  ”. The type series of P. casuarinus  (slide MNHN 35 E 4) actually includes a single male, which is a holotype by monotypy ( Mironov & Dabert 2010).

It is necessary to add that the slide MNHN 34 F 2 also contains a Protolichus  female, but it belongs to the brachiatus  rather than the crassior species group, because it has flattened and expanded setae e 2. We were not able to identify with certainty the species to which this single female belongs. 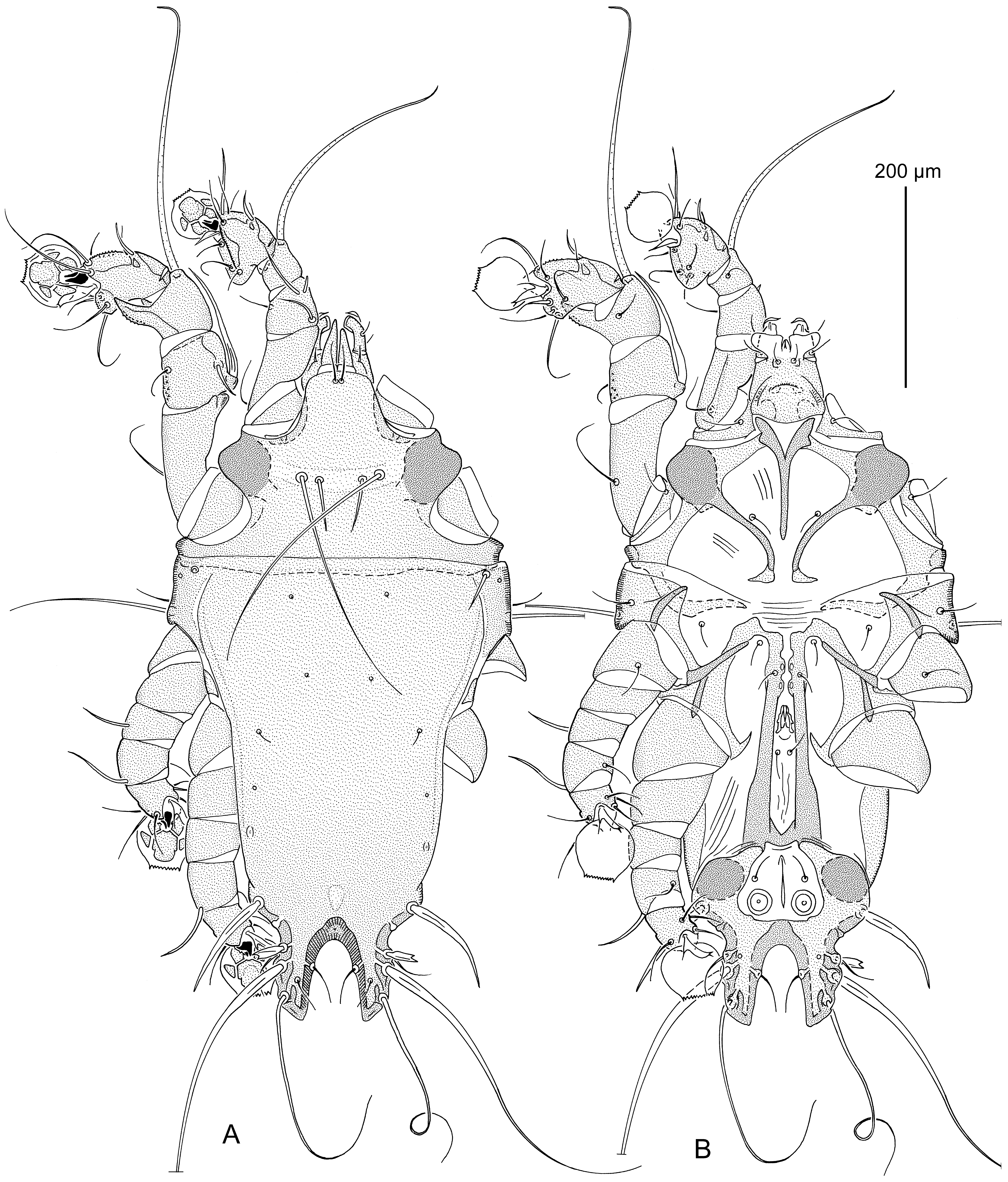 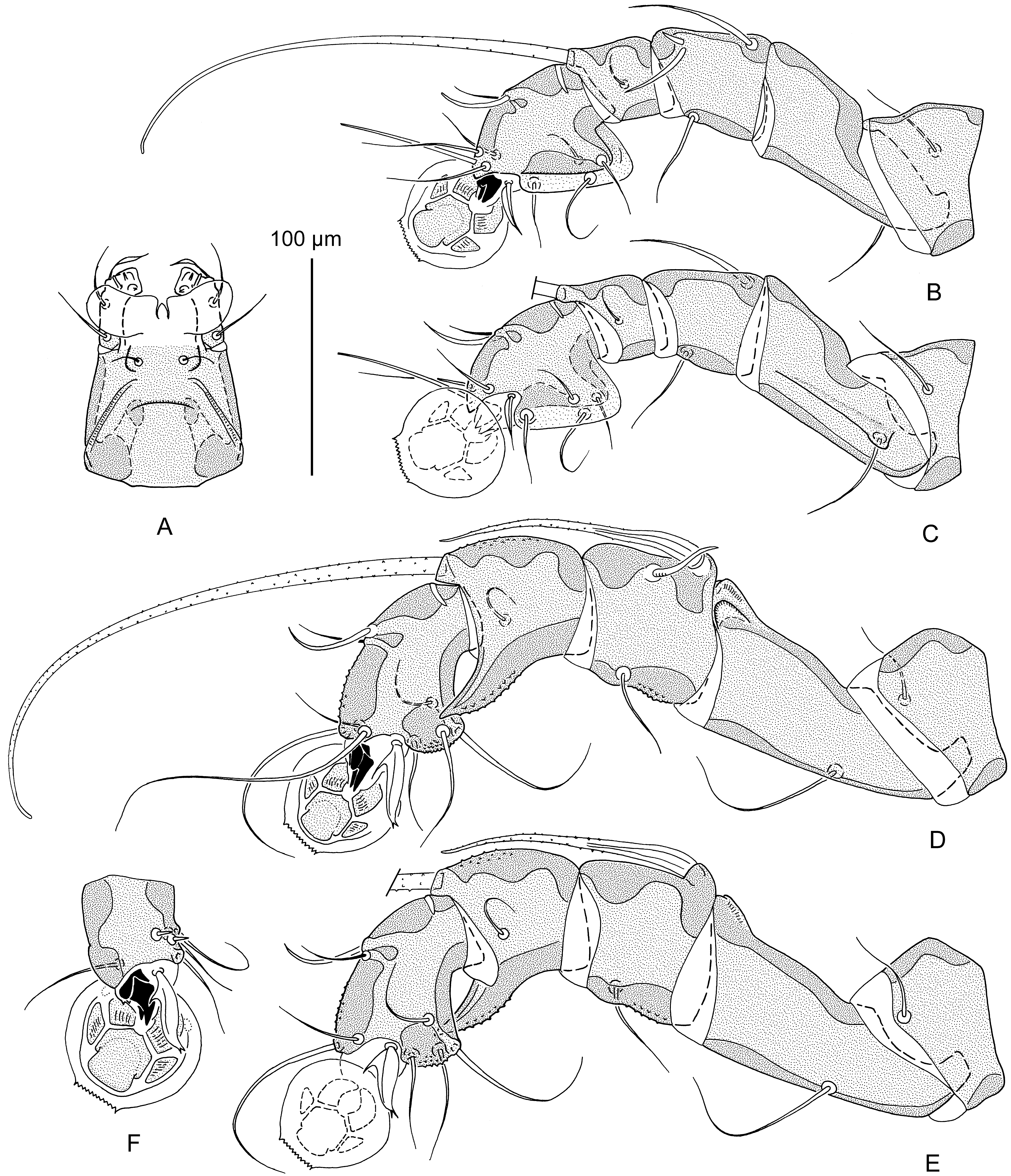