Description. The description refers only to the male holotype, until paragraph "aedeagus" inclusively.

Females: As males, except: some females with dorsal reticulation distinctly more impressed than in males; pro- and mesotarsomeres I –III narrower than in males, without suction setae. External genitalia as in Figs. 7–8View FIGURES 7 – 9. Spermathecal tract as in Fig. 9View FIGURES 7 – 9; spermatheca long and extended, with complex loop; sclerotisation of tubuliform ductus divided by soft, almost transparent part.

Variation: Paratypes vary slightly in habitus, some specimens being somewhat narrower or wider than the holotype and some being posteriorly a bit more strongly attenuated. All specimens have the pronotum much lighter than the head and elytra and with a conspicuous dark central marking, the latter of slightly variable extension and colour intensity. The extension of the pale area near elytral apex is also slightly variable. The discal puncture row on elytra is always rather inconspicuous but its punctures vary somewhat in size and depth among specimens. In all females from the type locality and in some females collected in the Andringitra massif, the dorsal reticulation is distinctly more impressed than in males; however, in some females from Andringitra it is more or less as in males.

Differential diagnosis. Within the genus Canthyporus  , C. reebae  sp. nov. is a member of the C. hottentottus  - group. Species of this group are characterised (in males) by the median lobe with a dorsal process and the parameres without apical incision and apical setae, and (in females) by an extended spermathecal tract with a loop ( Biström & Nilsson 2006).

Canthyporus pauliani  , the only species of the genus Canthyporus  known from Madagascar prior to this study, also belongs to the C. hottentottus  -group. Detailed descriptions of this species, with illustrations of habitus and male genitalia, can be found in Guignot (1951) and in Biström & Nilsson (2006) (the median lobe in lateral view is also reproduced in Guignot 1959). In addition, the senior author (MM) has recently studied the type material of C. pauliani  (one male and one female syntypes; MNHN; specimen data in Biström & Nilsson 2006). Canthyporus reebae  sp. nov. differs from C. pauliani  in many respects:

- habitus wider, with the sides more strongly rounded and the apex more narrowly rounded, with the maximum width more anterior and the dorsal surface more strongly and evenly convex ( C. pauliani  with body sides subparallel and dorsum rather flat);

- colour of ventral surface darker (areas that are black in C. reebae  sp. nov. are ferrugineous in C. pauliani  );

Despite these numerous morphological differences, C. reebae  sp. nov. and C. pauliani  have in common a dorsal process of the median lobe which in lateral view is straight, rather thin, and perpendicular with respect to the main part of the median lobe. Within the C. hottentottus  -group, according to the figures in Biström & Nilsson (2006), only three additional species share this particular configuration of the median lobe: C. alpestris Guignot, 1936  (from Kilimanjaro, Tanzania), C. petulans Guignot, 1951  (from South Africa and Lesotho), and C. loeffleri Wewalka, 1981  (from Ethiopia). According to published descriptions, C. loeffleri  has many similarities with C. reebae  sp. nov. (notably in size, habitus, colour, reticulation and punctation), but the two species differ at least by the colour of the pronotum (black in C. loeffleri  ) and antennomeres V-XI (brownish in C. loeffleri  ) and by the shape of the median lobe of aedeagus. Type material of C. alpestris  (the male holotype and the single male paratype) and C. petulans Guignot, 1951  (two paratypes, one male and one female), and several non-type specimens of the latter species, have been studied by the senior author (MNHN; specimen data in Biström & Nilsson 2006). Canthyporus alpestris  differs from C. reebae  sp. nov. mainly by: antennomeres V-X darker and slightly more elongated; much more strongly impressed dorsal reticulation; slightly larger punctures on pronotum and elytra; more strongly impressed discal and lateral puncture rows; lateral margins of pronotum less strongly converging; ventral surface paler; and shape of the median lobe. Canthyporus petulans  is similar in habitus to the species described here, but is otherwise very distinct (much larger, with central marking of pronotum more contrasted, with elytra paler, with dorsal reticulation more impressed and dorsal and ventral punctures much larger and coarser, and different shape of the median lobe).

Habitat. All specimens of the type series were found in May 2016, in two distinct areas: the south-eastern part of the Itremo mountain range (a single collecting site which is the type locality of the new species) and the eastern slope of the Andringitra massif (four collecting sites). The altitude range of the five collecting sites was 1,580 m – 2,140 m. The type locality is a large pond with dense vegetation of Nymphaeaceae  and helophytes, bordered by a peat bog with Sphagnum  (indicative of high acidity) and Drosera madagascariensis  ( Fig. 10View FIGURES 10 – 15). Here, specimens of C. reebae  sp. nov. were taken at small depth, not everywhere along margins but close to a small stream that was ending into the pond (not visible on Fig. 10View FIGURES 10 – 15). In Andringitra, specimens were collected below tree line at two sites: seepage in meadow surrounded by forest ( Figs. 11 & 12View FIGURES 10 – 15); small, grassy slowly-flowing ditch, exposed to sun but close to forest edge ( Fig. 13View FIGURES 10 – 15). The species was also found above tree line, in two very slowly-flowing streams in subalpine wet grasslands. The first one was about 50 cm deep, with peaty substratum and many Cyperaceae  helophytes (locality not illustrated). In the second one, C. reebae  specimens were more abundant; it was a much smaller and shallower stream with dense short grass ( Figs. 14 & 15View FIGURES 10 – 15). Common features of all five collecting sites include: high altitude, open environment, clear water, very slow water circulation, substratum rich in organic matter (mineral substratum invisible), small depth, and dense marginal vegetation of Poaceae  and/or Cyperaceae  . Within the study area, the species was never encountered in purely stagnant water bodies or in streams and rivers with dominant mineral substrate and/or noticeably unidirectional water flow.

Distribution ( Fig. 16View FIGURE 16). So far only known from the south-eastern part of the Itremo mountain range and from the Andringitra massif, in central eastern Madagascar, at altitudes between 1,580 and 2,140 m.

Derivatio nominis. This species is dedicated to Catherine Reeb, who organised and supervised the RicciaTeam expedition in May –June 2016, during which the specimens were collected. The species name is a noun in the genitive singular. 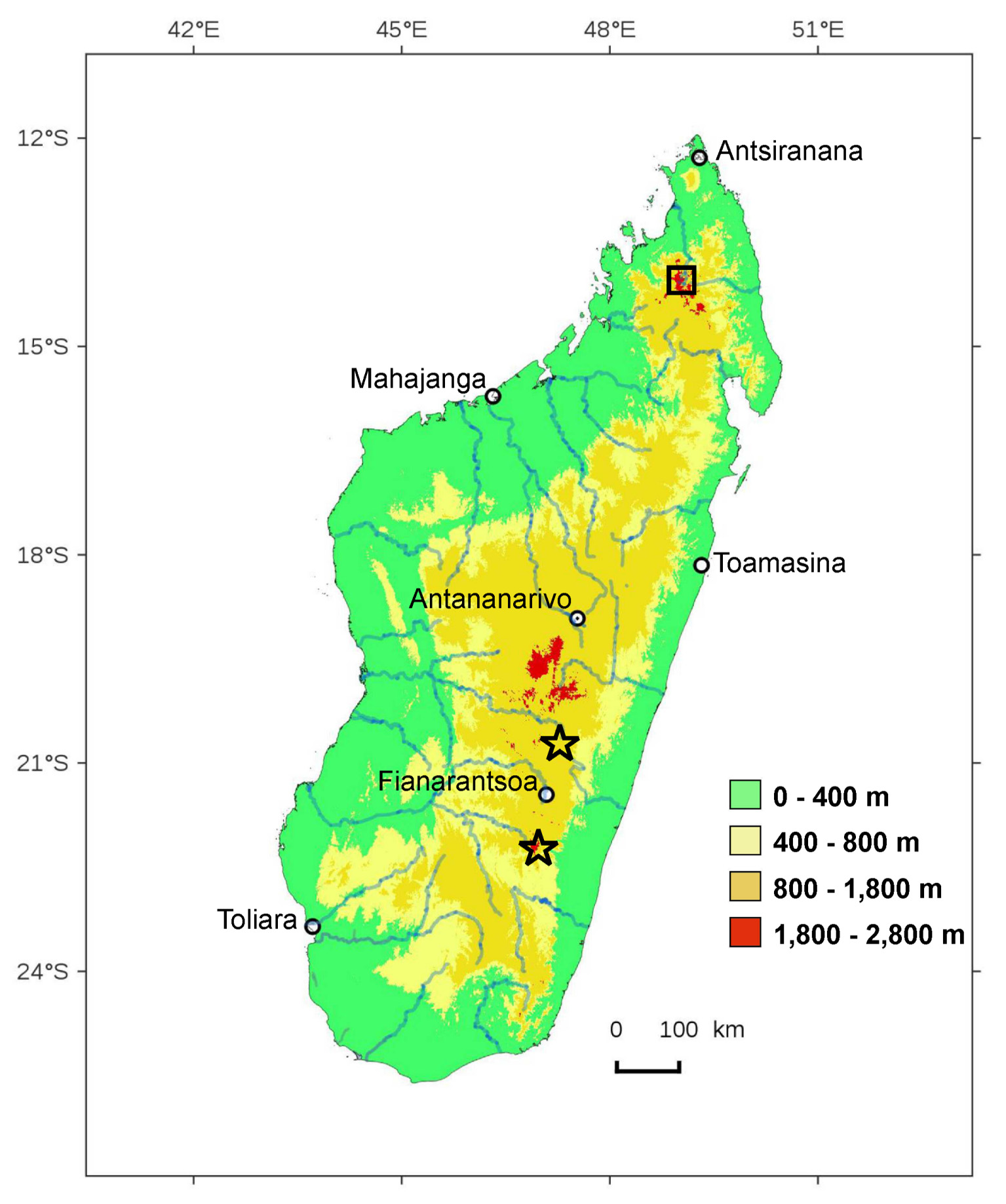 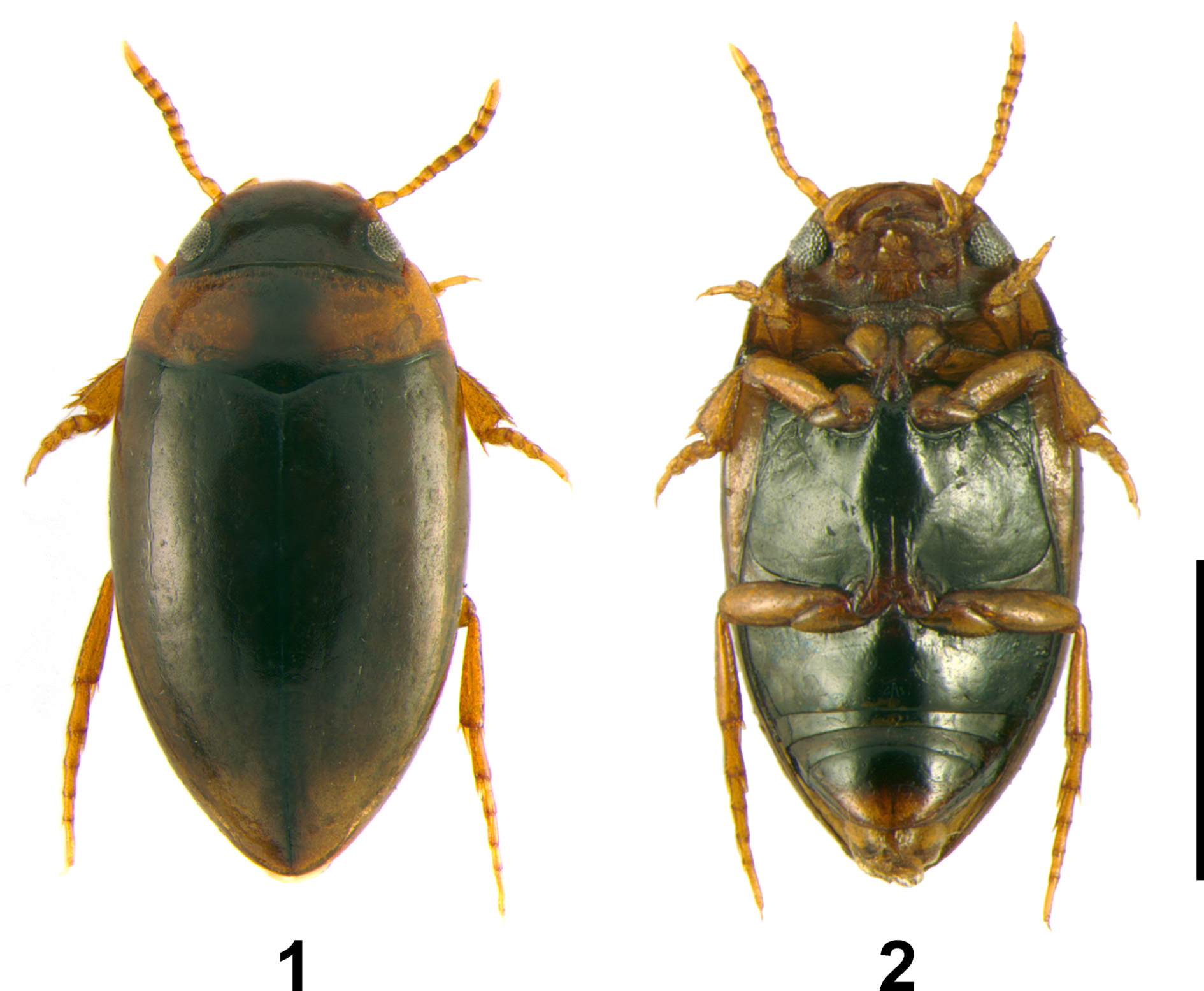 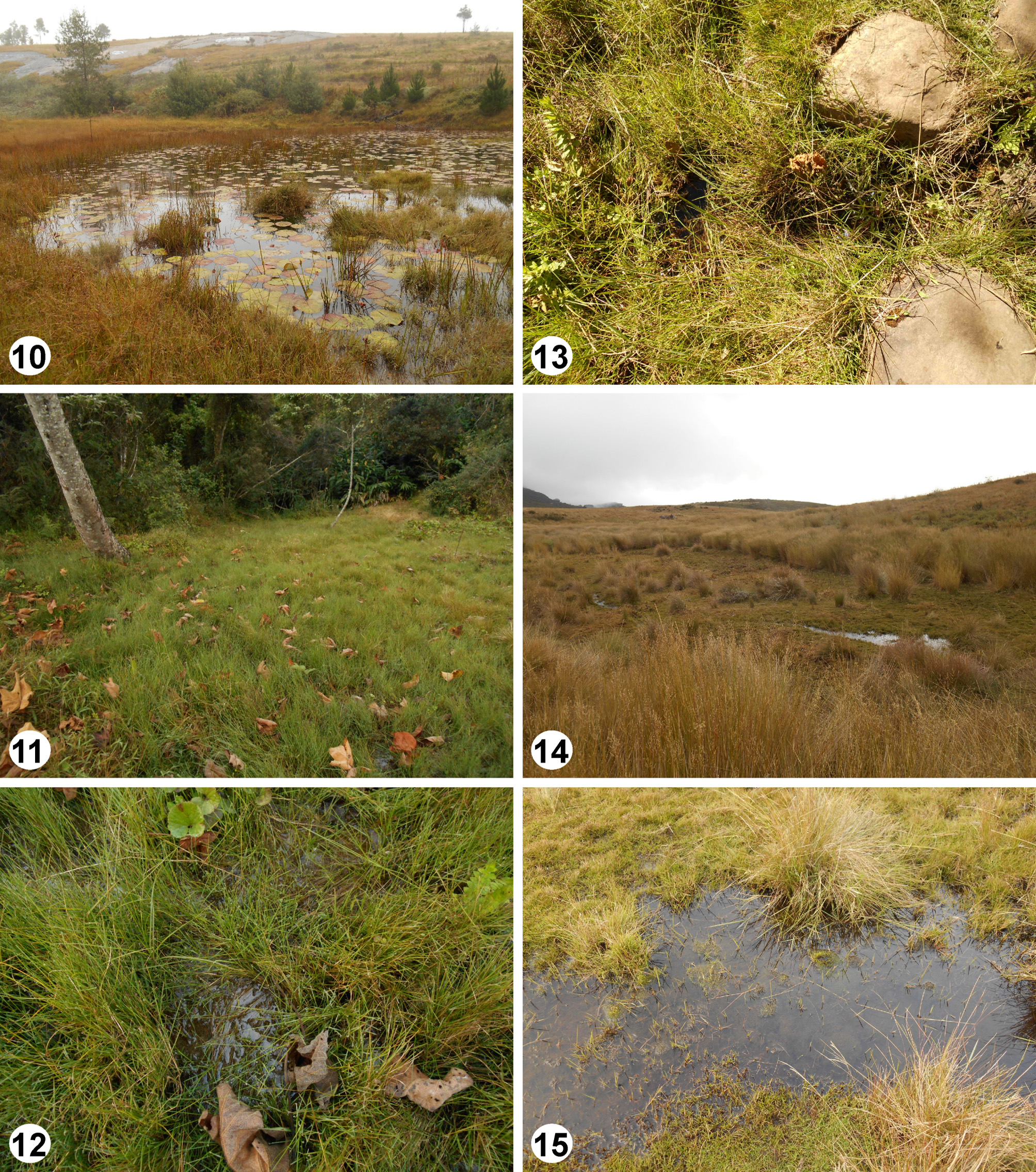 FIGURES 10 – 15. Habitat of Canthyporus reebae sp. nov. (10) Pond with Nymphaeaceae plants, with peat bog on the margins (Sphagnum spp. and Drosera madagascariensis), close to the N 7 road between Ambositra and Fianarantsoa (ca. 3. 5 km S Ambalamanakana; altitude 1,700 m). This place is the type locality of the new species. The specimens of C. reebae were taken towards the bottom right corner of the photo, in the grass, close to the end of a small stream with slowly-flowing water (not visible on the photo). (11) Grassy meadow surrounded by forest, in the Andringitra massif (ca 2. 5 km SSW Antanifotsy; altitude 1,600 m). The specimens were taken towards the centre-right of the photo, in water slowly seeping through the grass, as shown in the close-up view in (12). The substrate was very muddy. (13) Brooklet with very slowly flowing clear water, with dense grass (Andringitra massif, ca. 2. 3 km SW Antanifotsy; altitude 1,580 m). (14) Small slowly-flowing brook in wet grassland above tree line in the Andringitra massif (ca 4. 3 km SW Antanifotsy; altitude 1,990 m). (15) Close-up view corresponding to the centre-right area of (14).