Virola aguarunana was mainly confused with V. calophylla . Both species share stellate and sessile trichomes and well-separated lateral veins. Morphologically, it differs because the new species has sparsely pubescent abaxial leaf surface (vs. densely pubescent), long staminate perianth ([2-] 2.5-2.7 mm vs. 1-2.1 mm long), and fruits that are covered by a dense layer of trichomes (vs. covered with an inconspicuous layer of trichomes).

Virola aguarunana is recognized by its very short staminate inflorescences (2.2-2.5 cm long) with dense fascicles of flowers, relatively thin perianth that is externally densely pubescent and internally moderately pubescent, and a filament column that is shorter (0.4-0.5 mm long) than the anthers (0.6-0.9 mm long). It is further distinguished by its pyriform to subglobose fruits covered with ferruginous trichomes (Fig. 6A View Figure 6 ) that fall easy to the touch and leaf blades usually that are narrow with well-separated later veins and scattered pubescence of stellate and sessile trichomes, on the abaxial surface (Fig. 4A View Figure 4 ).

The specific epithet honors the Aguaruna people, who live in the area where this species was collected.

Staminate buds and flowers of Virola aguarunana have been recorded in January, October, and November; pistillate flowers were not seen in the studied material. Fruits have been collected in August and September.

No common names or uses are mentioned among the herbarium specimens observed.

Virola aguarunana is Endangered following IUCN criteria B1a and B2a. It is known from two localities, has an EOO of 98 km2, and an AOO of 12 km2. Further justifying this status, this very small distribution is combined with occurrence in areas known to be impacted by forest declines driven by shifting agriculture demands ( Antonelli 2022). Of the few species we were able to verify, the most recent was collected in 1997.

Most of the specimens of Virola aguarunana were previously determined as V. calophylla or V. sebifera , both widely distributed in South America. The new species shares some characteristics with V. calophylla , including a mixture of stellate and sessile trichomes and well-separated lateral veins (a feature shared with V. sebifera ). However, V. aguarunana can be distinguished by its sparsely pubescent abaxial leaf surface (vs. densely pubescent; Fig. 4A, E View Figure 4 ), longer staminate perianth ([2-] 2.5-2.7 mm vs. 1-2.1 mm long), a filament column that is shorter than the anthers (vs. longer than anthers), and fruits that are covered by a dense layer of trichomes (vs. covered with an inconspicuous layer of trichomes; Fig. 6A, E View Figure 6 ). Virola aguarunana shares the following traits with V. sebifera : a filament column that is shorter than the anthers, fruits covered by a dense layer of trichomes, and the same leaf traits as shared with V. calophylla . The new species differs from V. sebifera , by the sessile trichomes on the abaxial leaf surface (vs. usually pediculate; compare with Fig. 4M View Figure 4 ) and larger fruits (2.9-3.5 × 1.8-2.2 cm vs. 1-1.9 [-2.1] × 0.7-1.4 [-1.7] cm). Additionally, V. aguarunana can be differentiated in both species for its short and narrow staminate inflorescences with flowers borne in dense terminal fascicles. Further, V. calophylla and V. sebifera tend to have larger leaf blades.

The only seed that could be measured is from one of the two fruits of the specimen C. Díaz et al. 7195 (MO), which is not well preserved. The typical seed size for V. aguarunana is likely larger than presented here.

The specimen D. Neill & Dendrology course students 15280 (MO; fr), from Cordillera del Cóndor, Zamora-Chinchipe, Ecuador may correspond to this species, though it is difficult to tell without flowers. 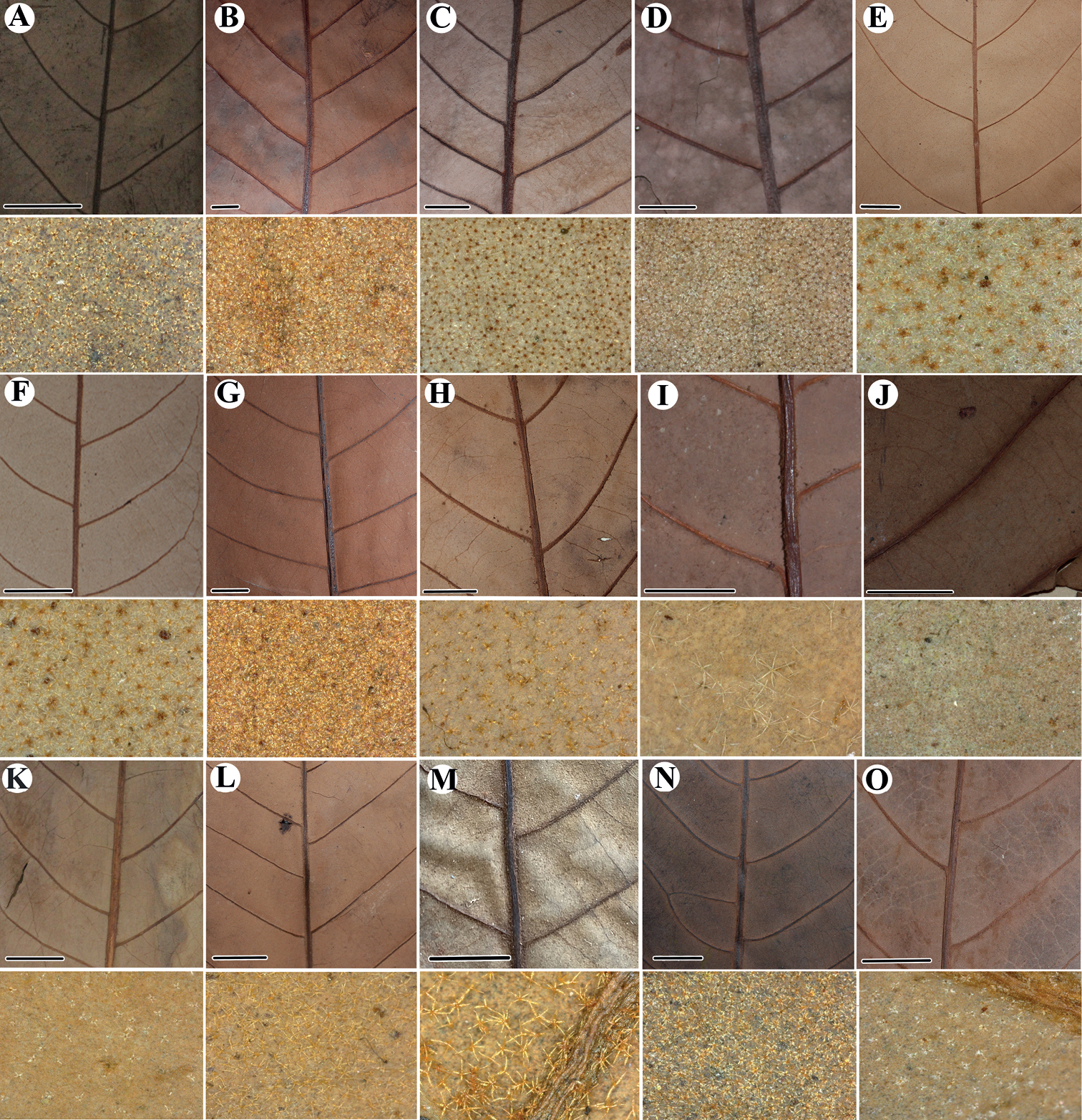 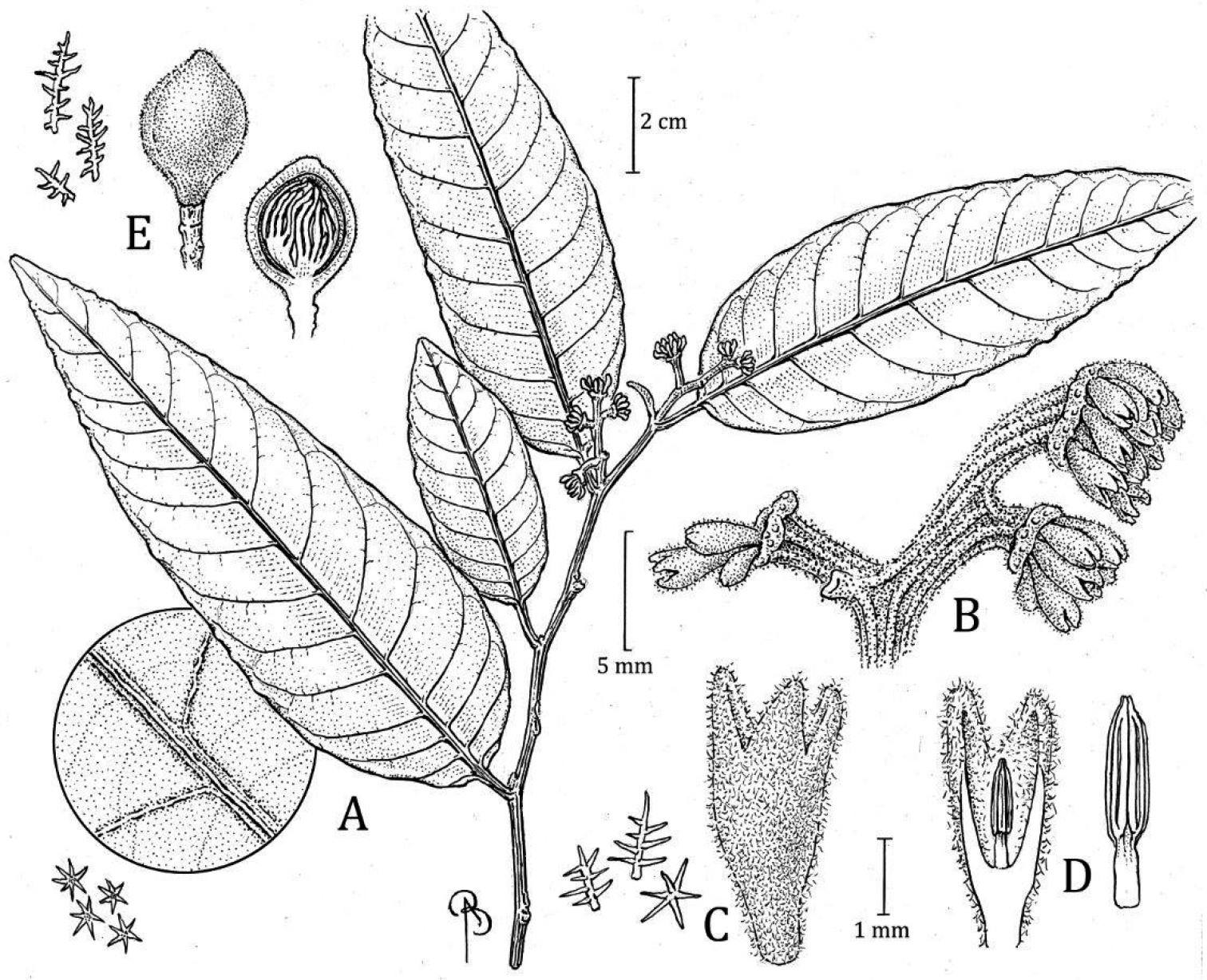 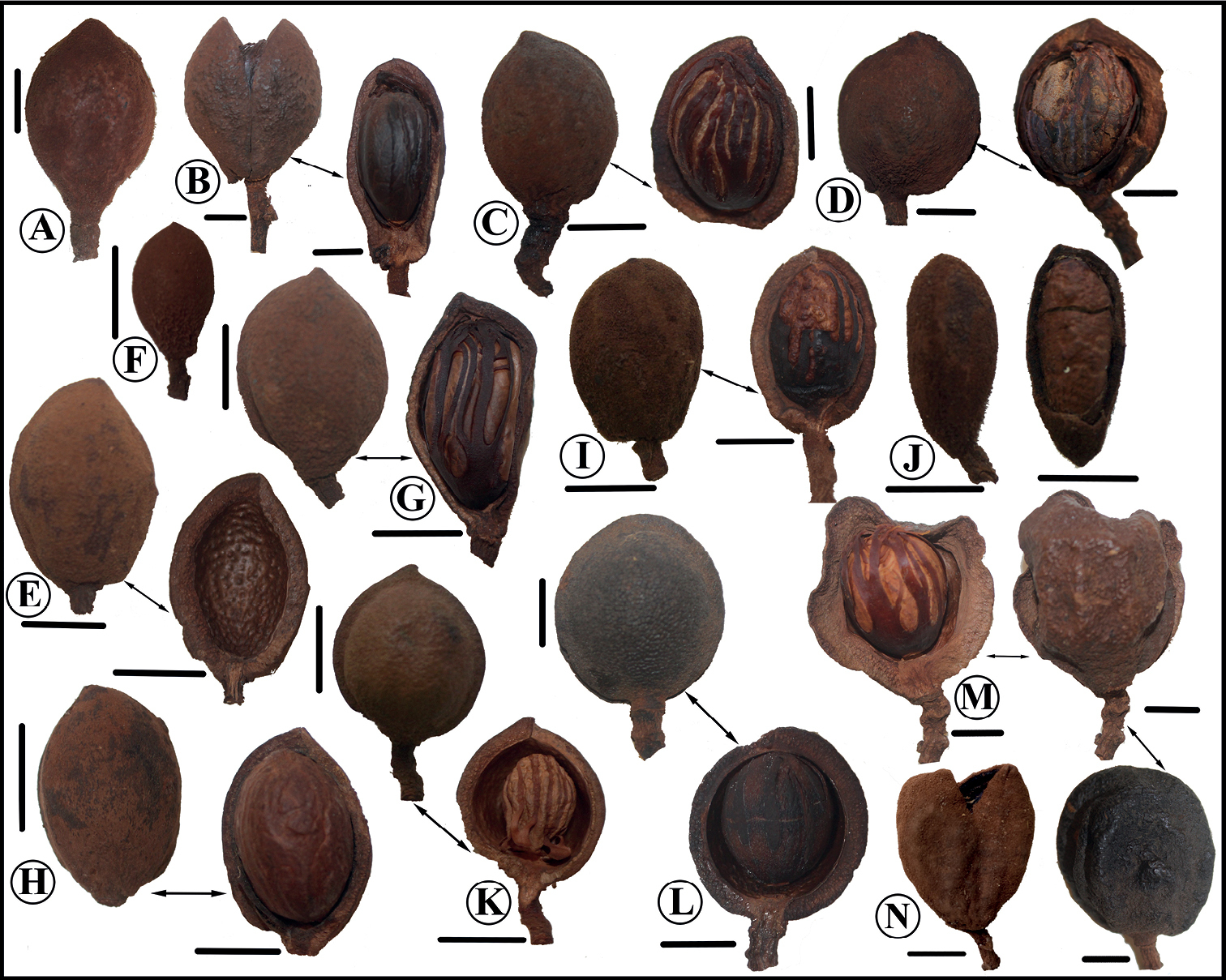 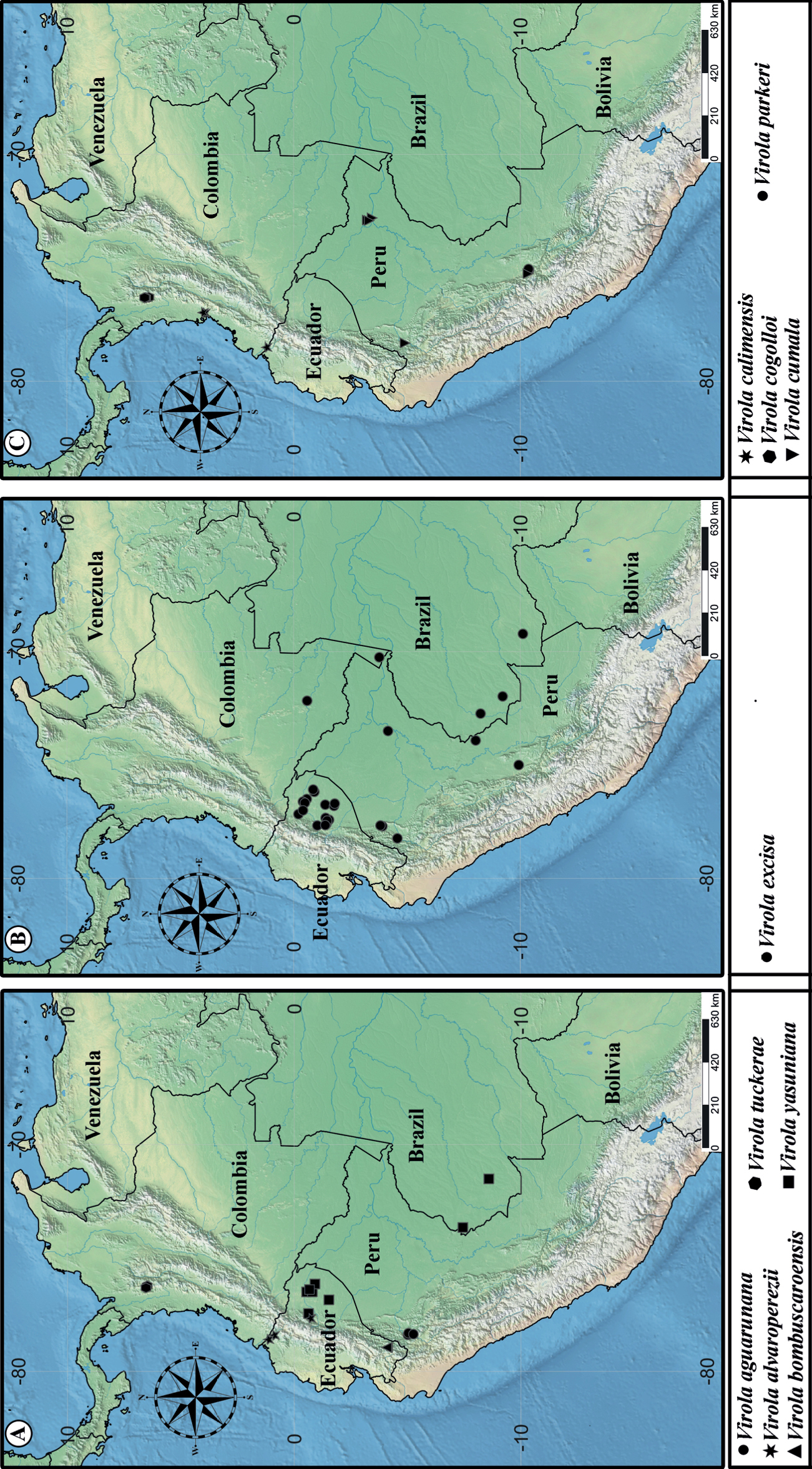 Figure 18. Geographic distribution of the new species of Virola.