Benson (1835a, p. 176) reported on a number of pteropods ‘taken on board the Ship Malcolm’ in the southern Atlantic and Indian oceans. Among those the author mentioned the catch of two species of ‘ Cuvieria  ’. Benson wrote: ‘Our capture of two perfect specimens of this shell will enable me to correct the character given by Rang, from imperfect specimens. Out of the number caught by us we took only two perfect specimens, one of which I unfortunately broke, its excessive fragility reducing it to the state in which Rang has described it’.

In the same volume of the Journal of the Asiatic Society of Bengal, Benson (1835b, p. 698) made clear that with ‘perfect specimens’ he meant shells still possessing their initial portion, the larval shell with protoconch (see Fig. 1JView FIGURE 1 herein as an example), that usually is shed in adult specimens, in which the basal opening is closed subsequent to shedding by a convex calcareous septum. Benson (1835b) described such still complete specimens and ‘corrected’ (rather: completed) Rang’s (1827) description. The same initial shell part, however, had already been described and illustrated by d’Orbigny (1834, p. 126; 1835, pl. 8, fig. 36) under the (misspelled) name Cuvieria  ‘ columella ’.

In his material Benson recognised two species, and identified the one with larger shells as C. columnella Rang, 1827  . For the smaller shelled species Benson (1835b) introduced the name Cuvieria oryza  , describing it as ‘being about half the length of the other, and in being somewhat more depressed, and more ventricose laterally’, and in a Latin diagnosis as ‘ Testâ laevi, intidâ [probably a printer’s error for nitidâ], depresso-cylindrica, lateribus versus septum ventricosioribus; apice elongato, peracuto [Shell smooth, [shiny], depressed cylindrical, more ventricose towards the septum, apical part elongate, strongly pointed]. Length 4/10 of an inch, of which the spire occupies nearly one-half’. The type locality is the tropical Indian Ocean between 8°6' S and 5°0' N, 86°38' and 91°0' E. The given height of the shell (4/10 of an inch = 10.16 mm) concerns the specimen still possessing the juvenile portion with protoconch. This means that specimens in which that shell part is shed (as it usually is) measure about 5–6 mm in shell height. Benson (1835b) compared such specimens in their ordinary mutilated state with ‘a grain of rice’, which also explains the choice of the name oryza  he gave to the species.

Two species of the genus Cuvierina  are currently accepted to occur in the Indian Ocean, namely Cuvierina columnella ( Rang, 1827)  and C. urceolaris ( Mörch, 1850)  . Comparing the measurement of Benson’s C. oryza  with those given by Janssen (2005, figs. 30–31) shows that the C. oryza  measurement agrees with C. urceolaris  , but not at all with C. columnella  . Also, as described, the ventricose shape of the shell points to C. urceolaris  (compare Fig. 1G –JView FIGURE 1).

Conclusion: Cuvieria oryza Benson, 1835  is neither a synonym nor a forma/variety of C. columnella  as accepted by previous authors, but contrarily is a senior synonym of C. urceolaris ( Mörch, 1850)  and therefore should be given priority over the latter, younger name. 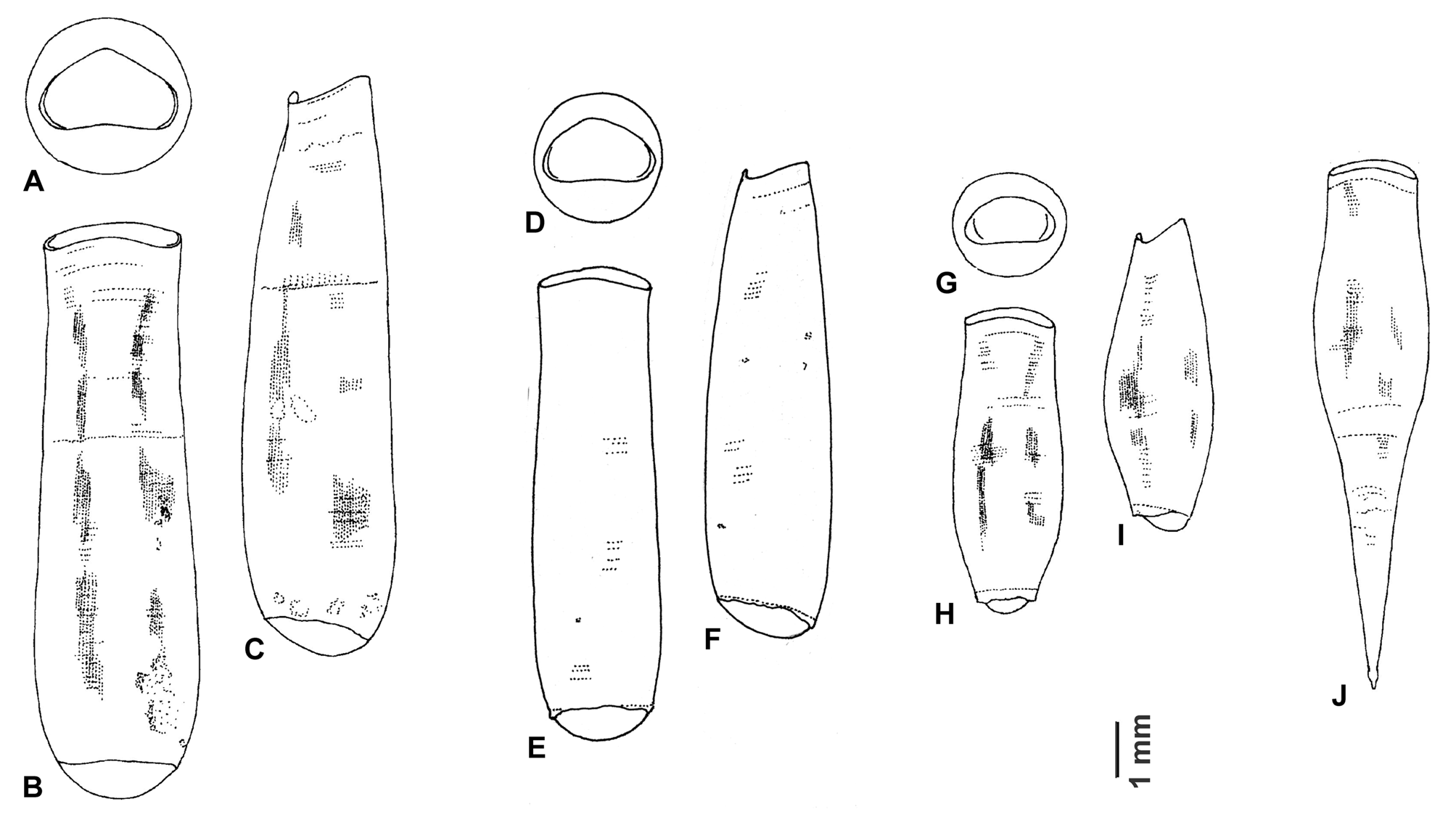