Möschler (1878) described and illustrated Heterocampa surinamensis   based on a single female from Paramaribo, Suriname. The holotype is in the MNB ( Fig. 11 View FIGURE 11 ), has been dissected by P. Thiaucourt. Becker (2014) transferred the taxon to Skaphita   . V.O. Becker (pers. comm. 2020) identified my images of the male and its genitalia ( Fig. 12 View FIGURE 12 ). I note that the male genitalia of S. surinamensis   are very different from those of all other species of Skaphita   for which the genitalia have been documented ( Table 1) particularly with regard to the A8 sternite and the spoon-shaped lobes each side of the aedeagus of S. surinamensis   —probably part of the juxta firmly joined to the aedeagus (compare Fig. 12 View FIGURE 12 with Fig. 17 View FIGURE 17 ). In spite of the similarities in habitus, it seems likely that S. surinamensis   does not belong in this genus, although the correct genus is not clear to me.

Kaye (1923) described and illustrated Boriza kalodonta Kaye, 1923   from Trinidad, the type (i.e. holotype) being given as from ‘ Trinidad, Palmiste, 30.x.11 (N. Lamont)’. This date is suspect since the earliest of the many documented specimens from Lamont’s collection is dated 1913, as Lamont didn’t start to label his specimens until that year (M.J.W. Cock unpublished). When Kaye and Lamont (1927) subsequently listed this species, they referred to specimens from ‘Palmiste, 31 Dec., 1920, San Fernando, 22 Feb., 1922 (N.L.)’ but do not mention the type data. The former specimen is in NHMUK, and is a male labelled and curated as the type of B. kalodonta   . The latter is a male in NMS, pinned with a drawer label ‘ Boriza kalodonta   Kaye’ in W.J. Kaye’s handwriting, and incorrectly labelled in typescript as the type. Kaye’s (1923) illustration is poor, with hardly any distinguishable markings apart from a submarginal dark spot on the dorsal forewing space 3 (M 3 –Cu 1); although it appears to be a male, it is otherwise undistinguished. It is therefore worthwhile to establish whether the NHMUK specimen is correctly labelled as the type. I suggest that it is the type and that the collection date, 30.XII.1920 ( Fig. 11 View FIGURE 11 ) at some stage prior to publication was transcribed as 20.X.11 as in the type description ( Kaye 1923). The fact that Kaye and Lamont (1927) did not include the date given for the type suggests they either realised this or overlooked it. I conclude that it is safe to accept the NHMUK specimen as the holotype. Becker (2014) made B. kalodonta   a synonym of S. surinamensis   . Becker (2014) also made Disphragis sexnotata Kaye, 1923   and Heterocampa aroensis Schaus, 1901   synonyms of S. surinamensis   , but these actions are reassessed under S. cubana ( Grote, 1865)   below. 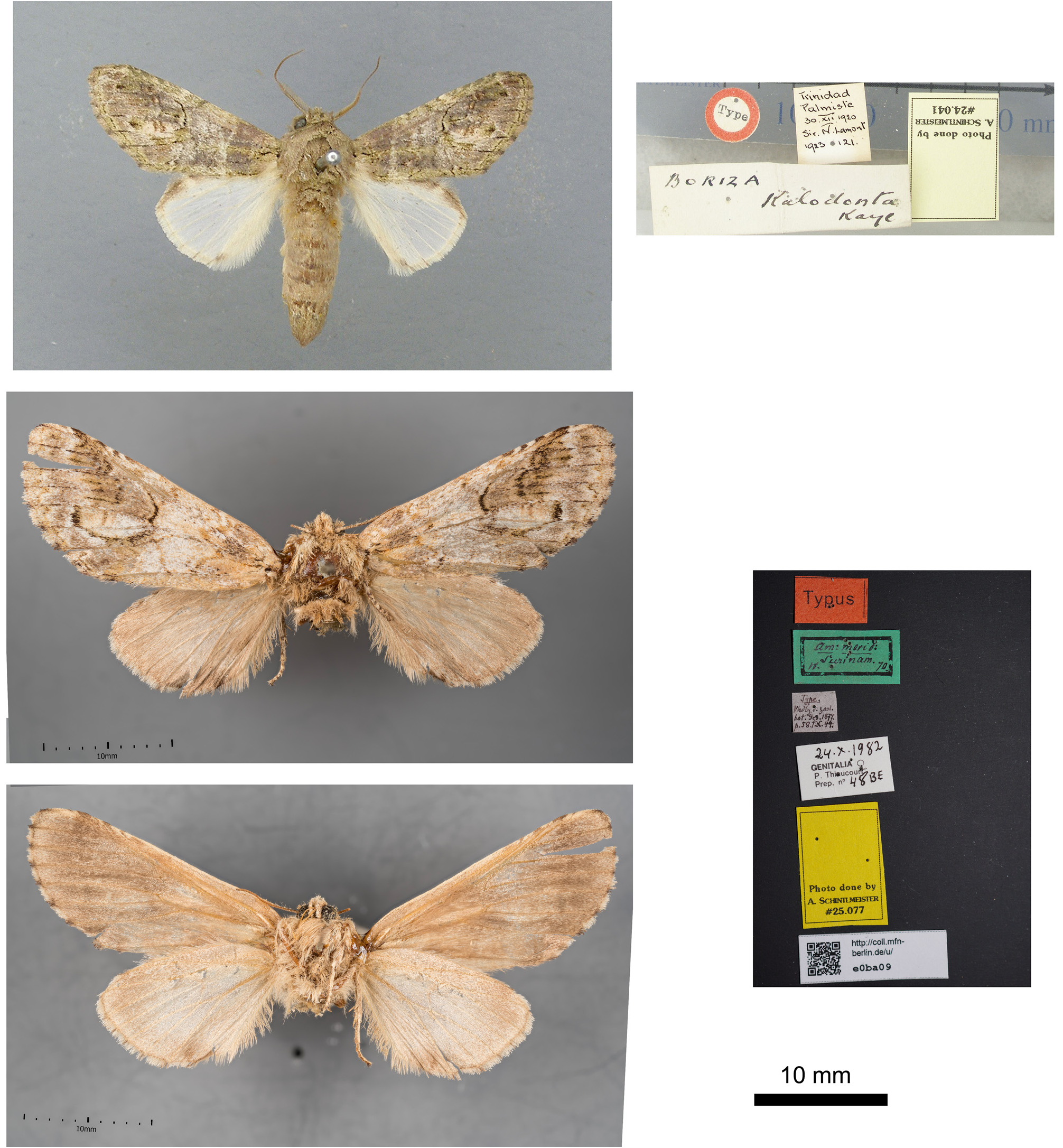