Thorax: Pronotum with two dorsal tuberculate shaped protuberances, one on each side of midline; posterior angle rounded with short and thin setae. Pterothorax lacking spots or projections. Anterior and posterior wing pads similar in shape and length (anterior wing pad length, 7 mm, posterior, 6.65 mm), both reaching middle of fourth abdominal segment (Fig. 2). Legs with femur, tibia and dorsum of tarsi with thin setae along their extension. Hind femur length, 3.9 mm; hind tibia length, 4.2 mm. Latero-ventral region of tibia with groups of spiniform setae apically, including some tridentate ones, especially on middle and hind legs. Tarsi tri-segmented, each with two ventral rows of tridentate setae, these more evident on the first tarsal segment.

Bionomics and taxonomic discussion. The water of the breeding site accumulated in a hole created by wood decomposition on a fallen tree trunk together with leaves and small branches. On a second visit on 25 November 2005, the same hole was colonized by tadpoles of Osteocephalus oophagus Jungfer & Schiesari, 1995 ( Anura : Hylidae ), a common species in Amazonia known to oviposit in phytotelmata ( Jungfer & Weygoldt 1999; Lima et al. 2006); no other Odonata larvae were found.

The larvae of five of 10 Pseudostigmatidae known from Brazil have been described: Mecistogaster ornata Rambur, 1842 , Mecistogaster asticta Selys, 1860 , Mecistogaster linearis (Fabricius, 1777) , M. rotundatum , and M. maculatum . Larvae of M. rotundatum and M. linearis have five to six setae on labial palp ( Sahlén & Hedström 2005; De Marmels 2007), M. ornata six ( Ramírez 1995) and M. asticta two ( Lencioni 2006). The larva of M. maculatum , with four or five setae, can be distinguished from those of M. linearis and M. rotundatum as well as from the other pseudostigmatid larvae ( Figs. 12–16 View FIGURES 12 – 16 ) by the shape of the gills ( Figs. 13 and 16 View FIGURES 12 – 16 , respectively). However, additional specimens will be necessary to further increase our knowledge of M. maculatum and M. rotundatum , since the larvae of these two species were described based on few specimens with damaged gills. There is a high possibility that the three species of Microstigma may represent geographical variants of a single widely distributed species must be taken into account when comparing the larva described here with the others associated with Microstigma .

According to our study and the literature, larvae of all the Mecistogater and Microstigma found in Brazil share the same type of habitats (tree trunk holes) as breeding sites ( Ramírez 1995; Sahlén & Hedström 2005; De Marmels 2007), except M. asticta which is so far only known to develop only within bamboo internodes ( Lencioni 2006) and M. maculatum which also can use bracts of fallen palms in the forest ( Mesquita 1992). 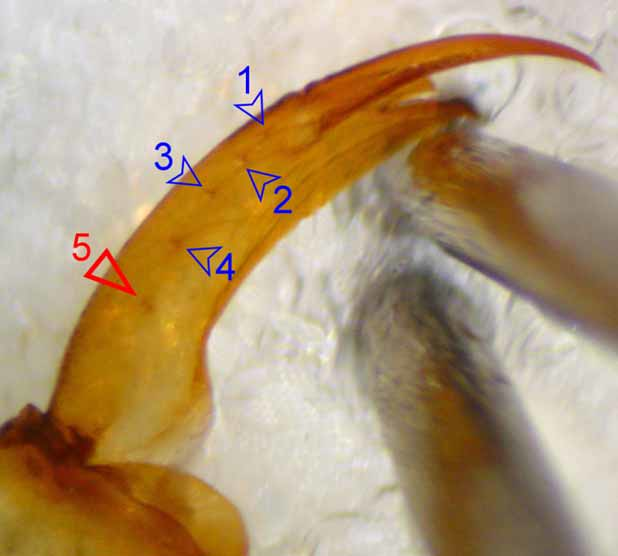