Remarks. We opted to provide here only the literal translation of the redescription of the holotype of C. armipes from Rafael (1995), which is up to date, and to provide a brief diagnosis including for the first time some characters that have proved useful in distinguishing the South American species of Crossopalpus.

Crossopalpus armipes can be distinguished from the new species here described mainly by the darker legs, lacking patch of tomentum on the vertex, antennae black, and dorsocentral bristles arranged into multiple series. Contrary to Melander (1918), C. armipes and C. pennescens are quite similar species, both bearing numerous rows of scutal bristles, legs extensively darkened, black antennae, wing hyaline with pale-brown to brown veins, and second and third costal sections subequally long. However, only C. armipes has the veins R 4+5 and M 1 initially divergent, but convergent apically, a shiny area on upper 1/2 of the postocular area, two subapical anteroventral strong setae, and the fore tibiae yellow.

The female terminalia of the holotype ( Rafael 1995, fig. 1) shows that the species is similar to C. albivertex sp. nov., C. aliceae sp. nov., and C. goliathus sp. nov. due to the presence of a mediodorsal depression on tergite 8, but none of these species have the anterior margin of tergite 8 so deeply concave as in C. armipes . Also, the slender shape of sternite 8 in C. armipes is similar to that in C. albivertex sp. nov., but in the former species sternite 8 is wider apically, while in the latter species sternite 8 is narrower towards the apex. Moreover, the sternite is medially divided in the apical 1/2 and the lateroapical portion of sternite 8 in C. aliceae sp. nov. and in C. goliathus sp. nov. is bent upwards. Although the female terminalia have the cerci+epiproct (= tergite 10) and part of the hypoproct (sternite 10) broken in Rafael’s figure, Bezzi’s original description states the cerci are vertical ( Bezzi 1909: 400), which can also be seen in C. albivertex sp. nov. and C. aliceae sp. nov.

The type locality of Tacna is indicated in all previous literature of the species as belonging to Chile. In fact, the Province of Tacna was legally part of Chile as a result of a peace agreement between Chile and Peru in 1883 (Treaty of Ancón) sealing the end of the Pacific War (1879–1883). Later, in 1929, Tacna was reassigned to Peru as result of the Treaty of Lima, but the record of the occurrence of the species in Chile has persisted. Thus, the occurrence here is updated taking into account these historical facts.

The holotype remained for years as the single known specimen of C. armipes , before Raffone (2012) record the species from Bolivia (Santa Cruz Dept.) ( Fig. 36 View FIGURE 36 ). Perhaps, the validity of this record needs to be revaluated (this issue is examined further under the subheading Distribution in the Discussion section below). 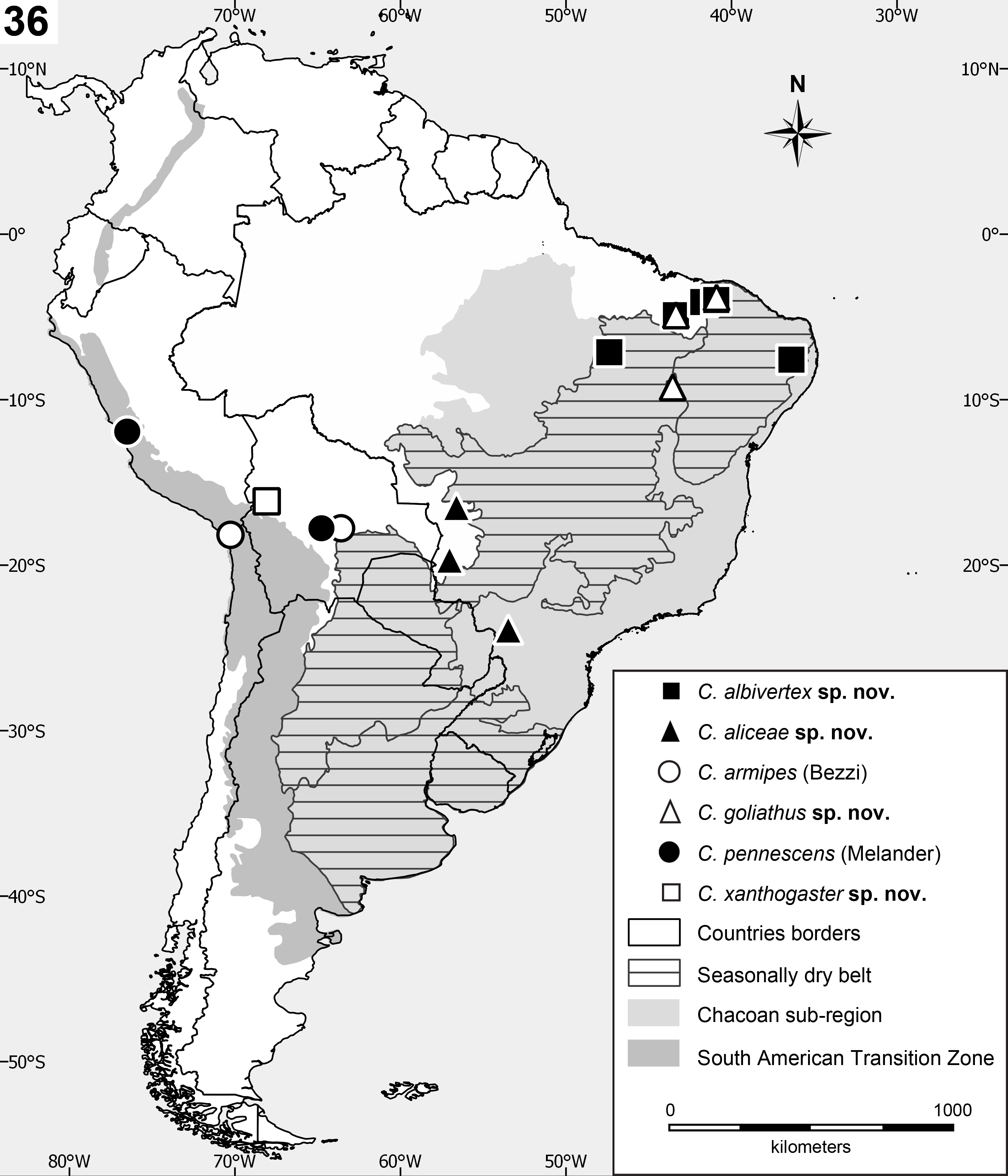 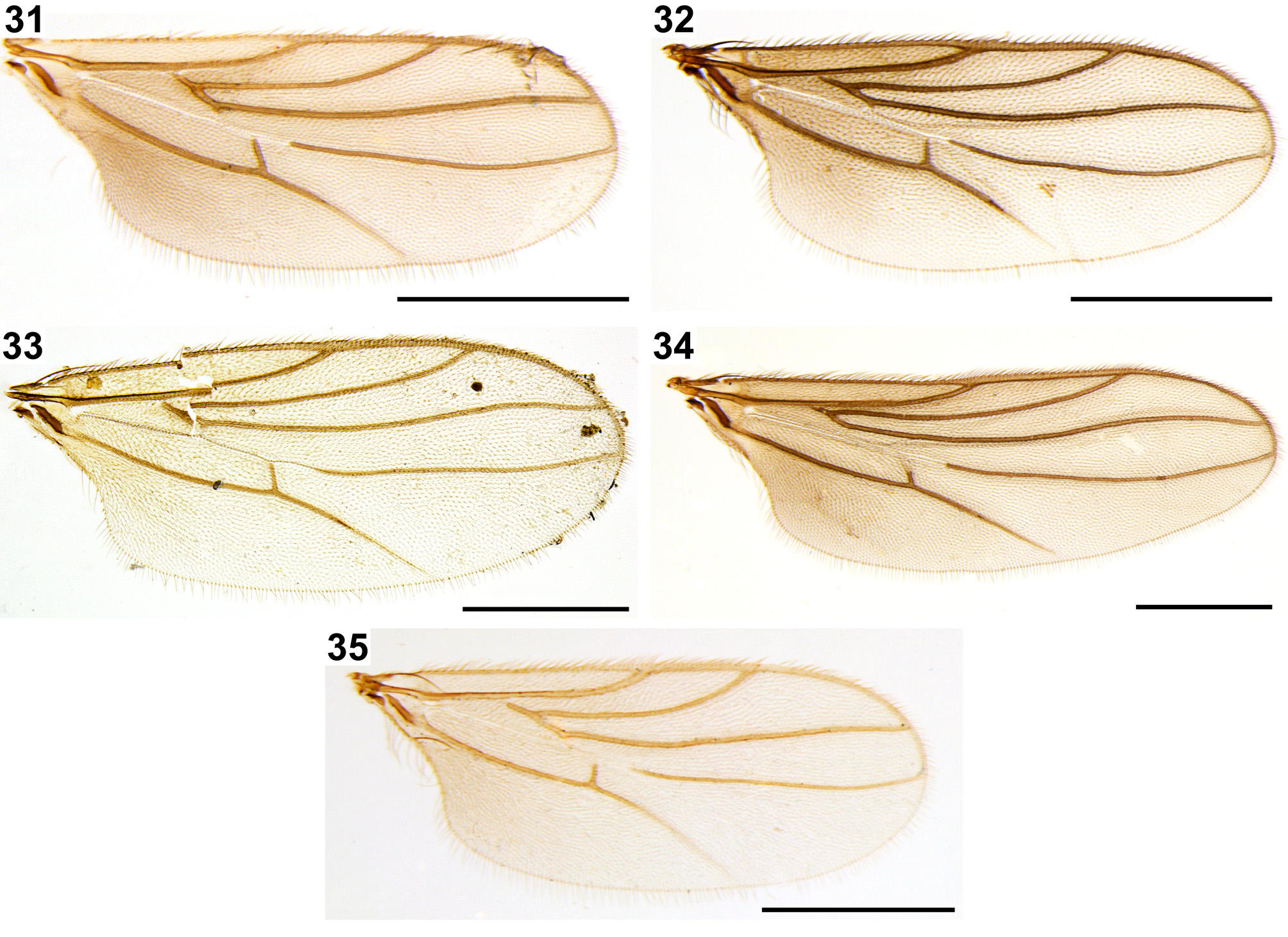